The Advanced Placement Program: Reflections on Its Origins

To mark the 25th anniversary of AP in its Spring 1980 issue, the College Board Review turned to one of the architects of the program to discuss how it developed

The Advanced Placement Program of the College Board grew out of some pre-Sputnik tree-shaking and hollering in the groves of academe, the loudest and the most widely reverberating of which proved to be the School and College Study of Admission with Advanced Standing. Many people do not remember that there were clamorous voices raised for educational reform and academic excellence years before the Russians' Sputnik in October 1957 made science venerable and learning in general nothing short of respectable.

The clearest call to upgrade the education of able students in American secondary schools came to me in the spring of 1952 by way of a letter and phone call from the late Gordon Chalmers, president of Kenyon College. In 1951 he and his faculty had pursued discussions about revising rules governing requirements for the bachelor's degree to allow able students to save time. Mr. Chalmers went on to describe the Kenyon plan to friends and associates in schools and colleges, and in the fall of 1951, 12 institutions formed a Committee on Admission with Advanced Standing. The Committee consisted of the presidents and deans of the following institutions: Bowdoin, Brown, Carleton, Haverford, Kenyon, M.I.T., Middlebury, Oberlin, Swarthmore, Wabash, Wesleyan, and Williams.

At a meeting in the spring of 1952 the college administrators agreed to invite into the Central Committee 12 headmasters, principals, and superintendents, and in May 1952, the full committee of 24 met to organize what was to be called, for want of a punchier title, the School and College Study of Admission with Advanced Standing, or SACSAAS, as it was, understandably, never called. I was granted a year's leave of absence from the presidency of Central High by the School District of Philadelphia to accept the post of executive director of the Study.

The Central Committee agreed at the outset to limit the study to 11 subject matters at the college freshman level. We organized 11 committees of 4 college and 3 secondary school teachers each in the following subjects: English composition, literature, Latin, French, German, Spanish, history, mathematics, biology, chemistry, and physics. The subject-matter committees were given the job of defining in their respective subjects the standard of achievement of intensive courses in secondary schools that could be offered to the ablest students and for which the 12 colleges could give partial or full first-year credit toward their bachelor's degrees.

This was a position that might be described as radical conservatism. Gordon Chalmers was fond of saying that our program was not for those colleges that had "taken a header into general education." The Committee also took pains to stress the difference between the Study's methods and objectives and those of another Ford Fund for the Advancement of Education program, Early Admission, to which President Chalmers, among others, referred as "the rob-the-cradle plan." 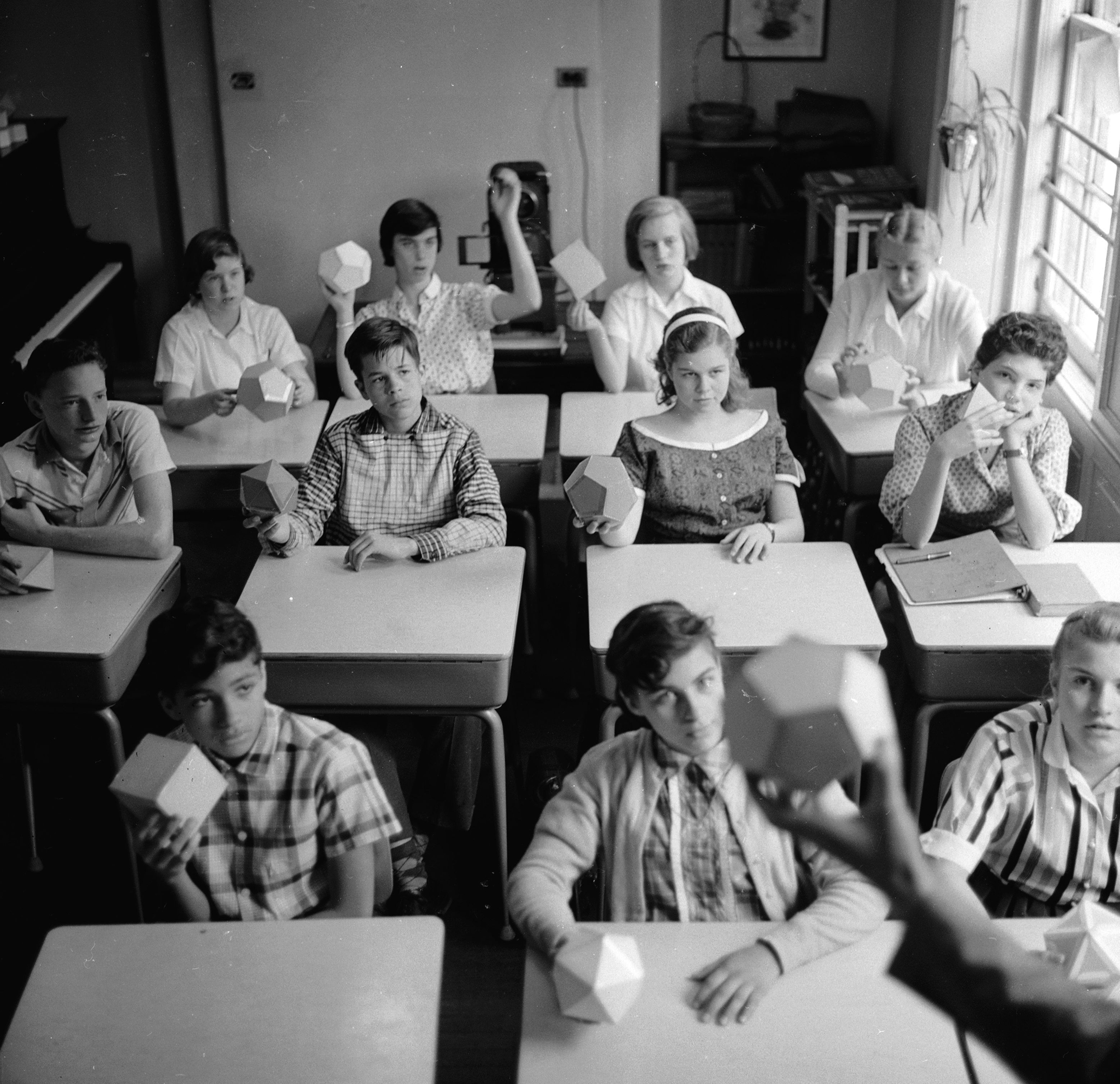 Pupils at the Steiner School comparing the properties of Platonic solids, or regular polyhedrons, circa 1955.

A Chance to Qualify

The School and College Study was based on several assumptions:

On the basis of these assumptions we believed we were committed to testing the following propositions:

As with all reforms, our problems were both philosophical and political. Could we draw up blueprints and specifications by which our propositions could be tested? Could we define standards that would satisfy the 12 proud faculties and yet give school teachers freedom for imaginative course planning and encourage variety in secondary programs? On one hand, we could extract the highest composite standards and best practices of the 12 colleges and create an unrealistic, far-out, premium-type of advanced credit. The polar option was so loosely to define standards as to mislead the schools and turn off the colleges.

Our subject-matter committees and the Central Committee had the problem, granting that definitions could be amicably arrived at, of selling the course descriptions to their respective faculties and departments. Beyond the philosophical and political encounter lay, for the schools, the economic challenge of finding the money for teacher time-allotments and other costs of stepped-up courses. The drive for high scholastic achievement in the public schools has never had conspicuous political or philosophical support, and the distressed state of school finances could then and can now be used summarily to abort any threat to a school district's economy, or the effortless maintenance of its mediocrity. The basic challenge of the Study, however, was to be met when all committees had compiled their reports and results of the first year's work were circulated to the 12 college faculties for review, debate, and judgment.

Before I became head of Central High of Philadelphia, I had spent eight years as a member of the English Department of Northwestern University. I had had ample opportunity to observe the not very subtle internecine conflict and the difficulty of developing consensus in a single college faculty on any proposition whatever, with the exception of the need for more money. To get 12 college faculties to agree to a body of course descriptions and creditable standards promulgated by a bunch of school and college teachers, mostly outsiders, was a notable achievement in the arcane world of educational dialectics. But it happened: unanimous acceptance.

What wrought this political and philosophical triumph? I attribute it in part to the persuasive powers of the several presidents and deans and, in part, to our system of having a full complement of college correspondents in every college as liaison people for our subject-matter committees. But in major part success was due to the quality of the men and women on those committees. 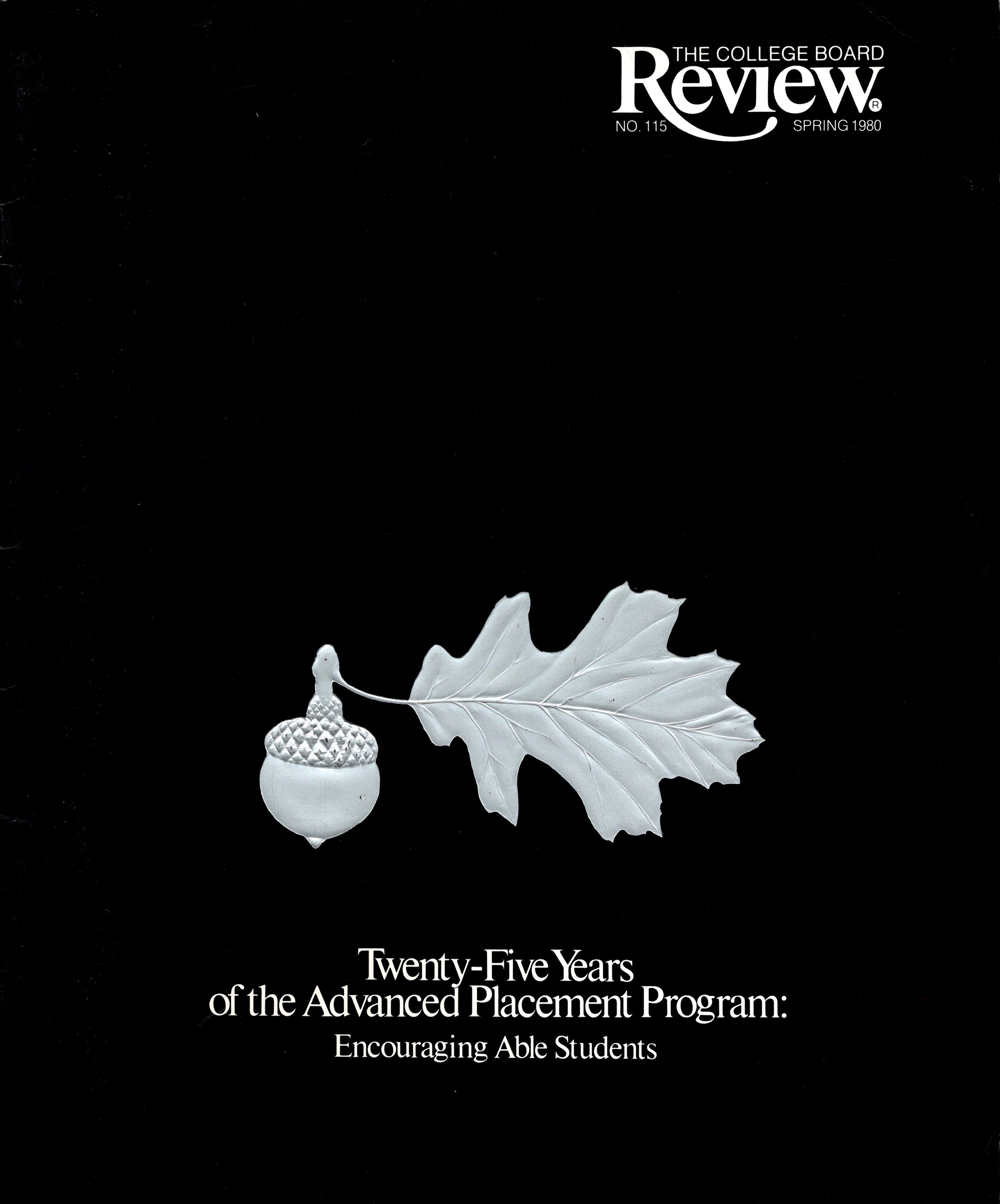 When Gordon Chalmers and I met in the fall of 1952 in Princeton with the first six of the committees, we went into those first sessions telling each other that this was it: the Study would go or not go depending on what happened as school and college teachers met in eyeball-to-eyeball confrontation. They would have to work out their relations and bend to the task, or pack it in and go home. By 1952 I had had enough experience working both sides of the street to know that neither schools nor colleges had exclusive claims on outstanding teaching talent. Our Central Committee representatives had made their recommendations of subject-matter committee members with great care. The collegiate contingent represented largely celebrated teachers as well as scholars, and the schools provided men and women of scholarly breadth as well as teaching competence of the highest repute.

The committees had varying histories. Among the linguists the Latin scholars marched like Caesar's own to clear conclusions. The French were, well, French, but upon agreement celebrated in Gallic style. The Germans really had almost as little difficulty as the Latinists, but the Spanish for a while had a small civil war. The scientists and mathematicians behaved with commendable rationality but took great pains in the process. The history committee became a fraternity, but more of that later.

Looking back, none of us in the Study had any idea when we started how many students would go for advanced courses, how many schools would or could offer them, or how many colleges would give advanced standing, let alone credit. We did know that there were many able students not being challenged and many heads of schools and teachers eager to do more for them. We were concerned, as I have suggested, that economics would handicap the program's acceptance in the public schools. School boards evidently could buy special education for the disabled. They could always use the argument that the gifted could make it on their own. Our response was that special education, extraordinary provision for the ablest students was as justifiable as for the disabled, on the plain principle of democracy. This argument was always called the dirtiest word in educational debating, "elitist."

Beyond the ranks of the founding 12 there was no early stampede among collegiate institutions to come into the advanced standing fold. It was clearly very difficult for some colleges to concede that even bright students could be taught in secondary schools first-year college-level courses as successfully and with that special elegance that was the daily experience of freshmen on "our" campus.

The matter of pricing credit was an issue from the beginning. After two years of examining in some pilot schools of the Study, we evolved the marking scale of 1 to 5, with scores of 3, 4, and 5 being the recommended range of credit-worthy performance. Colleges with the very highest standards, or with the wish to be considered as very selective, would never, at the outset, grant credit for any score below a 4. Except, of course, our 12 and, suddenly, Harvard.

McGeorge Bundy, then dean of Harvard, speedily announced that Harvard would consider a score of 3 for credit in any subject. He managed a Ford Foundation grant, set up a land office in Cambridge for advanced placement, and cashed in handsomely on the first crop of our candidates. So much for not being a member of the original cast!

The hesitancy to accept advanced placement candidates in the early years was not confined to the Ivy League colleges in general. Some of the women's colleges delayed a long time before taking the plunge, unmoved by the generous action of possibly equally prestigious and sternly principle institutions.

The examining program of the Study, which led to the takeover by the College Board in the Advanced Placement Program, was not without its problems, all of which the College Board inherited. The Central Committee recognized from the inception of the Study that ultimately examining would have to be done, but it did not want the emphasis to be merely or primarily on examination construction and grading. It wanted stress on the continuous communication of school and college teachers and departments, feeling that subject-matter academic teachers in schools should renew their cultural roots in the liberal arts, and that college teachers had much to learn from their colleagues in the schools. The Committee expressed special concern that its exams might be confused with some institutional practices of giving credit by so-called "proficiency" examinations.

The bias against exams per se was especially strong in our history subcommittee, led by a rebel guerrilla leader named Charlie Keller. To the consternation of the Central Committee, Professor Keller and his historians flatly rejected examining in history. They believed in schools and in each other to the point of saying credit could be given upon a school's certification. They were unshakable and they prevailed. It is one of AP's own history's delightful twists that Charlie Keller later became the program's most eloquent and indefatigable public defender, promoter, advocate, and ambassador.

The Study was fortunate in the energy, dedication, and professional competence of its partisans and early converts. AP has been similarly fortunate; the program has worked to a degree far beyond the expectations of those who helped get it started 25 years ago. My old friend and long-ago fellow conspirator Harpo Hanson has sent me AP's statistical history and current count on candidates, exams, and participating schools and colleges. Boiling the numbers down, which I do, of late, quicker than thought, a great many able students and a lot of able teachers in our schools are demonstrating the enduring possibility of excellence in academic education. That should help the rest of us to keep the faith, praise learning, and confound the Philistine.

William H. Cornog, a product of the Philadelphia public schools, taught English at Northwestern University for eight years, served as president of Central High School in Philadelphia from 1943 to 1954, and was superintendent of New Trier Township High School in Winnetka, Illinois, from 1955 until his retirement in 1974. From 1944 to 1954, Cornog was a member of the College Board Committee on Examinations, serving as chairman for three of those years. In 1967 he again became a member of this committee and was vice chairman from 1969 to 1973.

Five AP Classes to Get You Through Quarantine