How to Build a Happiness Business

Arthur Brooks has accomplished a lot in his unpredictable life. His latest endeavor is using experience—and science—to improve the mood of the nation and its young people

Imagine someone approaches you at a party—or a conference or at a café—and says they’re in the happiness business. You’re first reaction might be, “Pull the other one.” And that might be generous. Americans, in the third, and very online, decade of the 21st century, are conditioned to be on high-alert for cons, scams, and flim-flams. Promises of happiness? That’s a hustle’s dead giveaway. (Just look at what’s in your spam folder.)

But when Arthur Brooks says his line is happiness, it’s on the level—and well earned.

The writer, speaker, and public intellectual has had an eventful life: head of the American Enterprise Institute for more than a decade; author of more than a dozen books, including 2008’s Gross National Happiness: Why Happiness Matters for America—and How We Can Get More of It and From Strength to Strength: Finding Success, Happiness, and Deep Purpose in the Second Half of Life, released earlier this year; and he’s a professional French horn player.

“I want to orient my life so that I bring joy to other people, and I’ve been able to do that through music, through public policy ideas, and now through the science of happiness,” Brooks tells The Elective.

Outlets for this effort have been his “How to Build a Life” column in The Atlantic and How to Build a Happy Life podcast, which have confirmed Brooks as the country’s foremost guru of applied happiness. Through his essays and conversations, Brooks counsels a nation of anxious overachievers in the science of deep satisfaction.

“I’m trying to take the science of happiness and give people a way to apply it to their lives,” Brooks says. “Because happiness is a skill! If you do the work to understand it, you can get better at it.”

Happier people make better problem-solvers, Brooks says, so improving the state of our interior lives can lead to progress in the wider world. That’s especially true for young people, who, he argues, need a lot more exposure to the science of happiness so they can push back against a culture that mistakes misery for seriousness. That has led to his teaching Leadership and Happiness at Harvard Business School, where Brooks unpacks wisdom from Aristotle to the Dalai Lama and demonstrates how modern neuroscience and psychology provide a scientific basis for age-old insights.

“We ask the big questions, and then we look at the neuroscience and the biology, we look at the psychology experiments, and then we develop actionable strategies for their lives,” Brooks says. “They’re learning about happiness in this intensely practical way, and they love it.”

Brooks recently spoke with The Elective about overcoming a culture of fear, treating your life like a start-up, and why curiosity can be a cure for hopelessness. 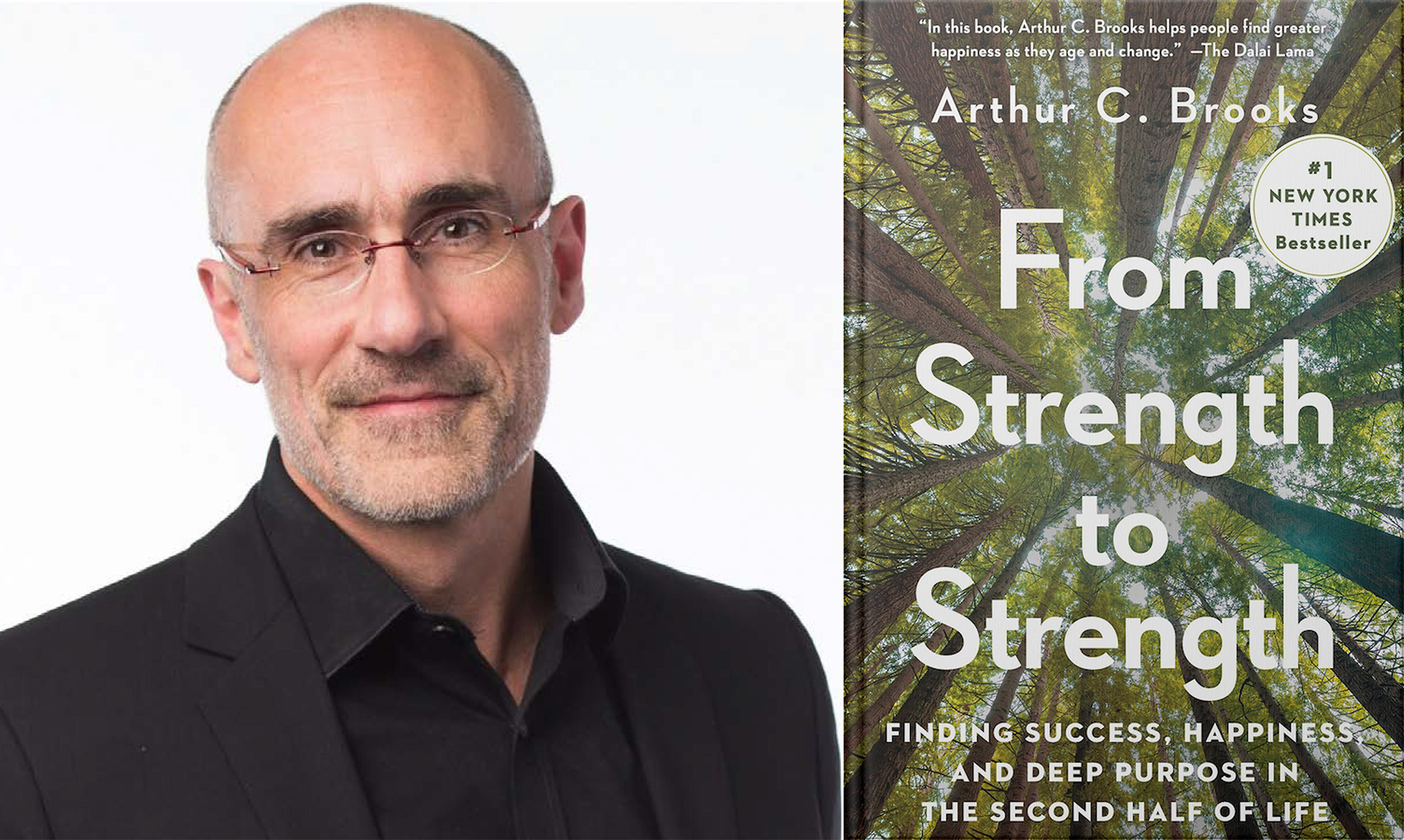 You’ve had some very big career shifts in your life. Do you see any common threads that brought you to the role of happiness guru?

I am dedicated to lifting people up and bringing them together using my ideas, such that people can experience more love and happiness in their lives. That’s my mission! I’ve been working toward it in a lot of different ways throughout my life. I played the French horn, ran a Washington think tank, and now I’m writing and speaking and teaching about happiness. And I plan to be doing that for the rest of my life.

I’m basically running a happiness business right now, giving 175 speeches a year, going out on the road every week, writing and teaching and giving interviews about the science of happiness. It’s all happiness all the time.

But the general trajectory is more or less the same across every chapter of my life. I want to orient my life so that I bring joy to other people, and I do that through sharing ideas that can change people’s lives for the better.

Happiness feels weirdly countercultural right now. Our national mood seems to be pretty dour and pessimistic. Do you have that sense, too?

Absolutely. Happiness has been in decline for a bunch of years, and it’s basically in free fall in America right now. We’ve never seen higher rates of loneliness, depression, anxiety, and even suicide among young people. It’s really dangerous, especially for young people, this sense that if you’re not miserable and anxious you’re somehow not a good and serious person.

We need to lead a movement to reverse that! A lot of people will find it offensive to suggest that you should be happy when we have so many problems in the world, that the only rational response is misery. That’s stupid, ridiculous nonsense. That’s not rational. It’s a way to manipulate other people. When someone else says you should be miserable and afraid, that’s them saying, “You should do my bidding.” When they say they want you to be happy, they’re saying, “I want you to be free.” And that’s very countercultural.

Why are we in such a bad mood?

We’re in a fear-based polarity right now. Fear and love are opposites, and right now you see fear running all through our society, manifesting in grievance and contempt and victimization and hatred. An environment of grievance creates unhappiness and a sense of misery in people. If you can’t make communion with other people, with people you disagree with, life is boring, bitter, and unhappy.

There are absolutely injustices in our society, and there all kinds of things we should reject and fight against. But young people today are like conscripted child soldiers in a culture war that’s being run by Baby Boomers. They need to rebel against that, to mutiny against the ministers of misery who are telling them that the world is hopeless. They need to reject this tired culture war being imposed on them by their elders. 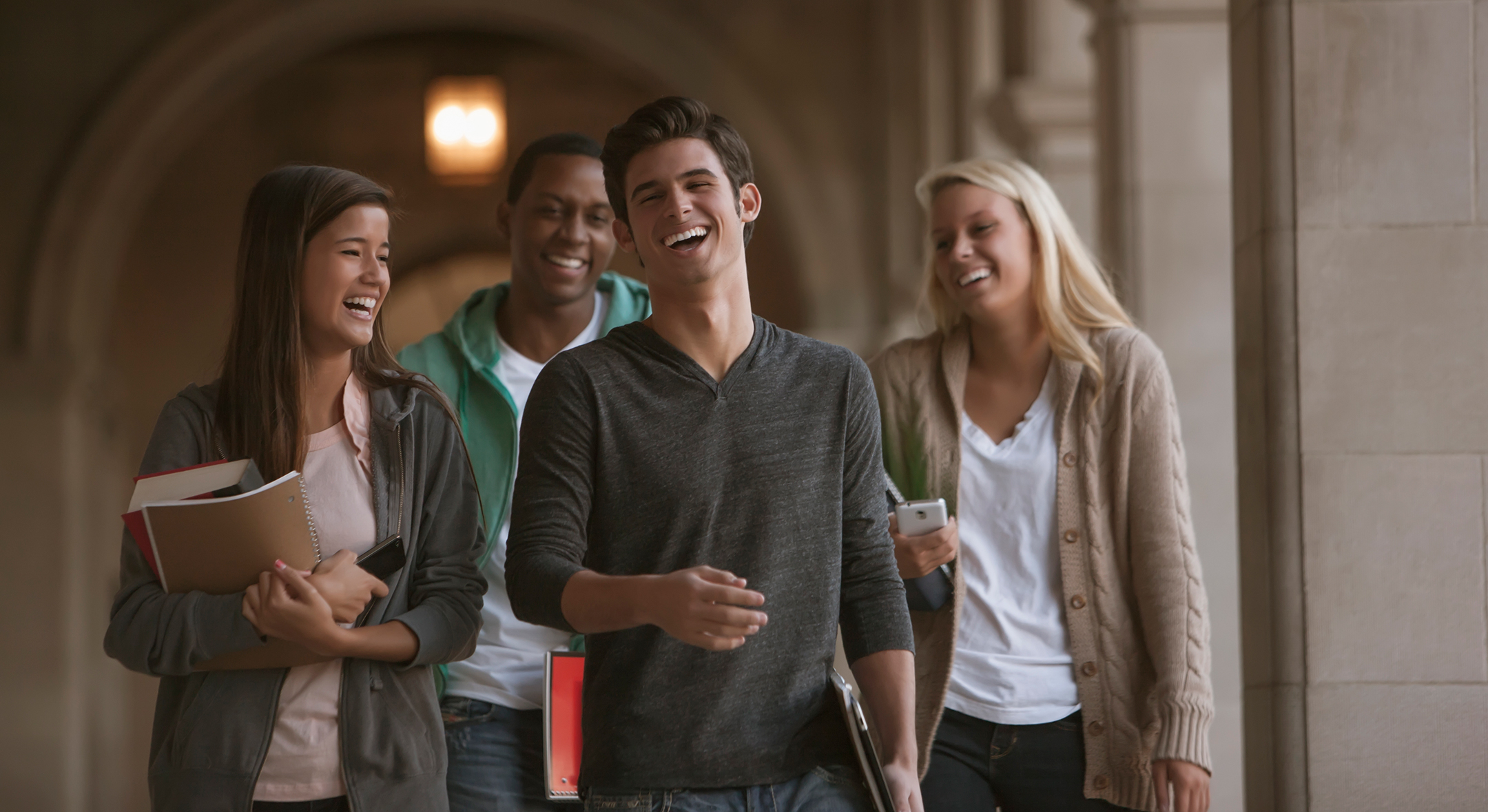 "It’s very important for young people to learn as soon as possible that they can manage themselves," Arthur Brooks says, "that they have a lot more power than they think."

Are you optimistic that we can break that spiral of fear and unhappiness?

Things that can’t continue forever won’t. People will wake up and say, “I’m miserable, and I don’t like this.” They’ll start to rebel against the people telling them they should be miserable.

This happens in American history: We go into these deep grooves of polarization and discontent, and then we pull out of it. We should all be serious about the business of our lives and define ourselves as problem solvers, as people with the power to live happier lives with more love and connection in them.

We need to encourage that movement, that natural drive for happiness. We need to encourage the love of and hunger for happiness. That can happen in formal ways, with more happiness training and real happiness science in schools and universities. And it can happen by cranking up these subversive messages in the culture, where you don’t attack anybody but just induce questions: “Are you happy? Who’s your misery coach, the person telling you that you have to be unhappy or else you’re weak and unserious? Is that person doing you a lot of good?”

What are some of the habits of mind that help cultivate happiness, especially in young people?

It’s very important for young people to learn as soon as possible that they can manage themselves, that they have a lot more power than they think. The world presents you with stimuli. And if you react to them without thought, you’re a reactive person.

But if you experience that stimuli in the prefrontal cortex first and give yourself time to really think about them before responding, you can actually learn how to manage yourself. That’s called metacognition, and that’s the big thing. Metacognition means you’re aware of the fact that you’re aware. Part of the reason you’re so miserable is that you’re aware of yourself, but that metacognitive power gives us a way to do something about it, to shape your feelings and responses instead of letting them control you.

If I could make everyone more metacognitive, the world would be a much different place, and young people would be much happier. 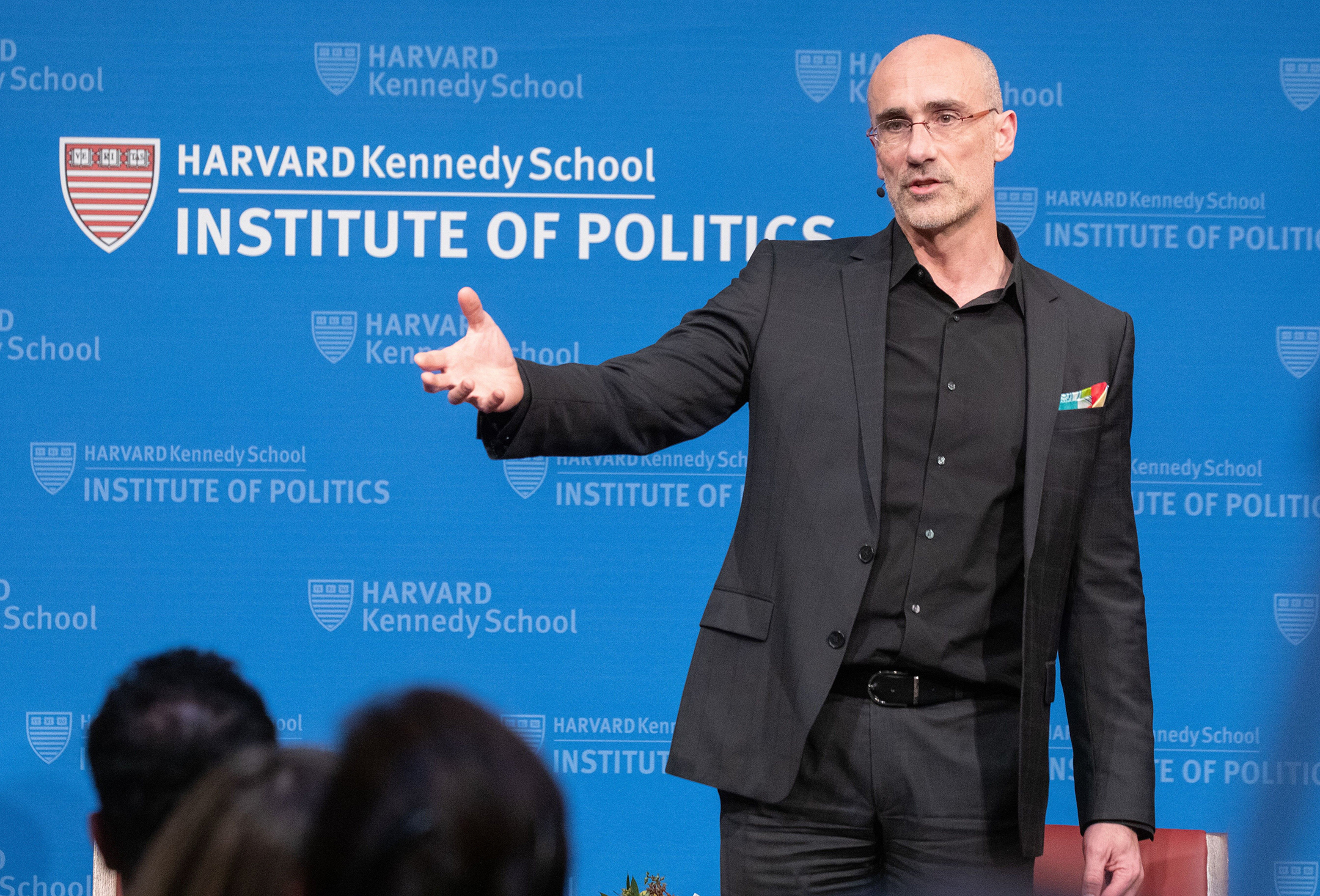 Arthur Brooks speaks at Harvard about the science and importance of happiness.

How does education contribute to happiness?

Curiosity—being interested—is a basic positive emotion. Being curious and interested gives you a sense of self-efficacy and a sense of motivation. When you’re interested in something and fully engaged, it’s intensely pleasurable.

There’s an ancient evolutionary imperative to learn. It’s fun to know stuff and know how to do stuff, so you get a lot of pleasure from learning. When you learn stuff, you become more effective, and you’re less likely to starve or get eaten by a tiger. So evolution said you should really enjoy learning!

A lot of people never get good at that basic positive emotion. But you can cultivate it, and it doesn’t necessarily have to be through formal schooling. My son Carlos learns all kinds of stuff on YouTube. “How did you know how to fix a TV?” I asked him. “Oh, I saw a video on it and I figured it out.” He’s getting lots of pleasure from learning that stuff, from knowing how things work and being able to fix them. You can apply that to just about everything in your life.

Is that part of your motivation for changing careers every decade or so, to learn new things?

You know what’s really exciting? An intellectual adventure! And that’s what I’ve had throughout my life.

For a while, it looked like I was going to be the first generation in my family not to get a PhD. But I eventually ended up going back to school and doing it because I wanted it, because I felt hungry for it. I went from being a successful classical musician to an incompetent economist. Starting over in a completely new discipline and going backwards was hard. But I learned how to manage the start-up of my life.

You also have to learn how to channel your ambition into the kind of things that bring real happiness, not just outward success. Really ambitious people have a hard time finding happiness because ambition is basically, “I want more, I want better.” It can be very self-focused. A success addict’s brain under an MRI looks like a meth addict’s brain. It’s not pretty. They’re more interested in being successful than in being happy.

You have to learn how to live by the values you hold dear. And that’s a huge adventure.

You have to learn how to live by the values you hold dear. And that’s a huge adventure.