A Night to Honor Promising Young Black Engineers and Scientists

Hosted by US Black Engineer magazine, the Council of Engineering Deans of the Historically Black Colleges and Universities, and Lockheed Martin Corporation, the three-day event focused on careers and connections for minorities in STEM fields.

But the centerpiece was the Black Engineer of the Year Awards, which "recognize leaders who are developing innovation" and "continue to provide leading employers with the opportunity to share the achievements of minorities in STEM."

The night’s top honor went to Theodore Colbert III, president and CEO of Boeing Global Services, who was named Black Engineer of the Year.

He graduated from Georgia Institute of Technology and Morehouse College, as part of a dual degree program, in 1996 with Industrial and Systems Engineering and Science degrees. He worked at Ford, in the UK, and Citigroup before joining Boeing in 2009. But as he told Georgia Tech in 2021, he likely wouldn’t have had a career in technology if he hadn’t received a Commodore 64 home computer in 1982.

“To me, it was like a game, but what I was doing was really programming,” Colbert said. “The challenge connected me to the computer at a young age.” 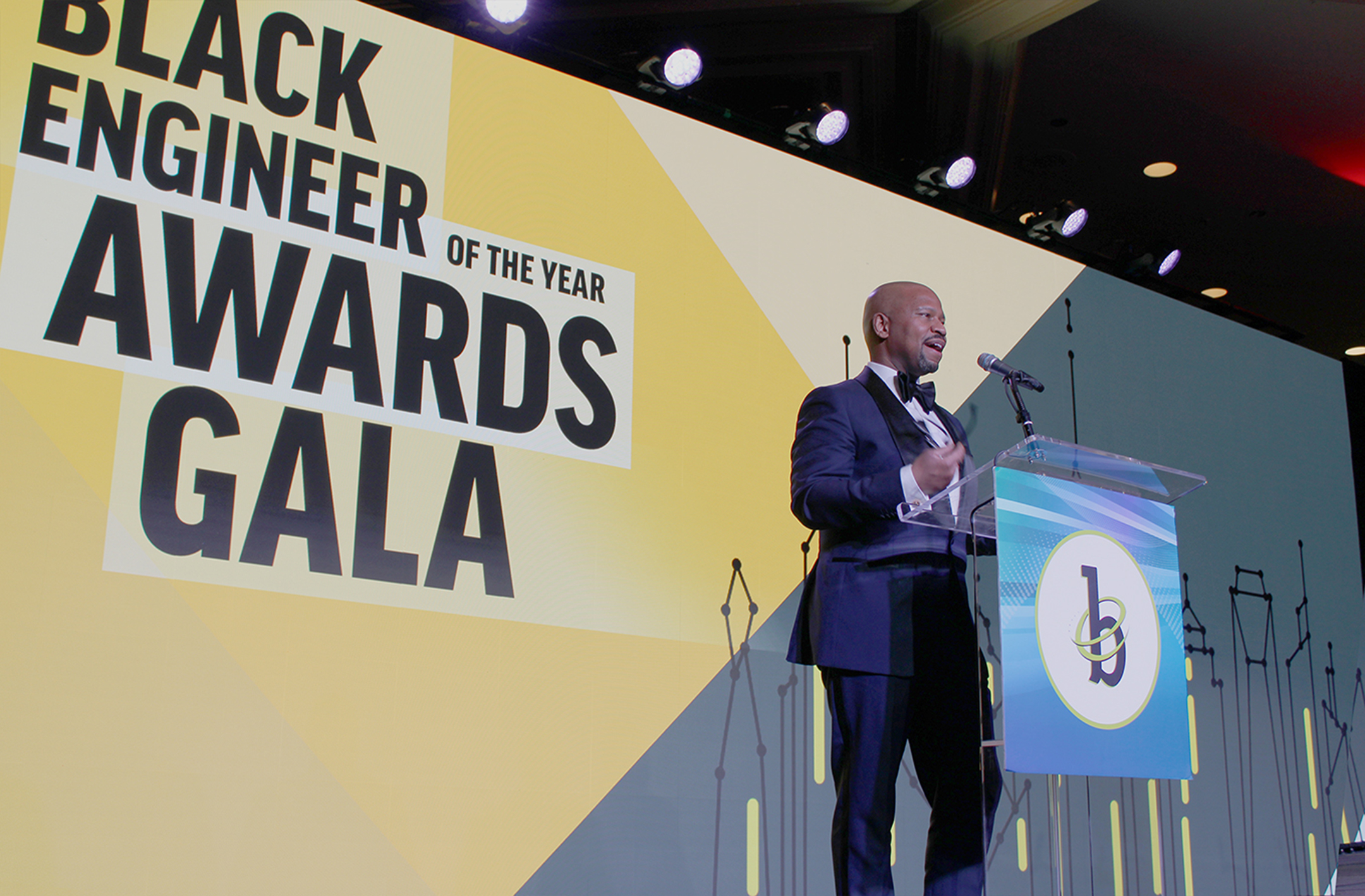 Ted Colbert, president and CEO of Boeing Global Services, speaks at the 2022 Black Engineer of the Year Awards ceremony in February 2022.

Colbert is the third recipient of the Black Engineer of the Year award to come from Boeing, a testament to the company’s commitment to diversifying its workforce. As USBEIT notes, "Since 2018, Boeing has invested more than $10 million in Historically Black Colleges and Universities (HBCU) partnerships and developed programs that have increased HBCU intern hiring by more than 400%."

The future of Black STEM professionals was also represented at the conference and awards ceremony.

Dozens of students and young professionals also received awards at BEYA 36. They were recognized for using STEM to innovate a wide variety of government and private industry initiatives and projects.

Among the honorees were twin sisters Shalisha  and Shonda Witherspoon, who shared the Most Promising Engineer in Industry Award for their work as software engineers at IBM Research's Thomas J. Watson Research Center.  Shalisha has contributed to IBM’s Federated Learning (FL) framework, a platform supporting machine learning, while Shonda is focused on artificial intelligence and the Internet of Things (IoT). Shalisha’s work helped the FL framework earn a "highly selective IBM A-Level Accomplishment;" as an intern, Shonda was part of the only all-female team in IBM's first virtual hackathon, which won first place in the IoT-TJbot category.

Shalisha and Shonda grew up in Miami with four other siblings. They were homeschooled until attending Florida International University. An older brother introduced them to technology when they were kids, and when the first-generation college students took their first computer science course they found there were only three young women in the class. But it wasn’t long before "we were outperforming the boys," Shalisha told FIU.

They graduated from FIU’s College of Engineering and Computing in 2016 with highest GPA in the school (both 3.95). "Even though [their] family struggled to pay for their studies and minority women remain greatly underrepresented in STEM disciplines, Shonda and Shalisha were undeterred,” FIU wrote. “They are more than sisters; they are a team.”

Winning the BEYA is "validation that we are on the right track," Shonda said. Her sister added, “It can be disheartening to not see yourself represented. We want to show them that someone who looks like them can become engineers or enter the tech field.”

Shalisha (left) and Shonda Witherspoon show off their Internet of Things device, the Helenbot, named after Helen Keller, which was able to interpret the manual alphabet. Its development earned Shalisha and Shonda first place in an IBM hackathon.

Other young honorees at BEYA 36 included Karla Vanessa Morris Wright, who won the Most Promising Scientist in Government award for her work as Principal Member of Technical Staff at Sandia National Laboratories, where she helped develop "MORFEUS (Multi-Physics Object-Oriented Reconfigurable Fluid Environment for Unified Simulations)... a project funded by the Office of Naval Research."

Sharing the Most Promising Scientist in Industry award were Dr. Janelle Rowell, senior biotechnologist at the MITRE Corporation, and Dr. Abdallah Diagne, research investigator at Corteva Agriscience. USBEIT noted that Rowell "earned recognition for guiding a team that helps NIH provide commercialization support to innovators developing medical products," as well as helping "advance MITRE’s work for the Department of Homeland Security and the Department of Defense." Meanwhile, Diagne "has been central to the success of a new insecticide molecule that is progressing through the Corteva Discovery pipeline."

Dr. John B. Slaughter won the first BEYA in 1987 and is currently Deans’ Professor in Education and Engineering at the University of Southern. Erroll B. Davis Jr., the 1988 recipient, retired in 2010 as chancellor of the University System of Georgia and its 35 colleges and universities. Davis also worked to increase the number of both students enrolling in STEM and minority K–12 teachers educating future generations of potential BEYA honorees.

“These pioneering leaders raised the bar for all of us, and it is an absolute honor to be counted among them today," Colbert told USBEIT about winning the award. "I hope to continue their legacy of inspiration and spur on the next generation of minority leaders to step up and change the world."