The experience of students on the Navajo Nation reflects the challenges facing Native peoples on tribal lands across the U.S.

The covid-19 pandemic has shuttered college campuses across the United States and turned many students into remote learners. But not everyone has been able to continue their education from home, and one of the biggest barriers has been lack of access to reliable broadband internet.

Covering 27,000 square miles of the southwestern United States, the Navajo Nation is home to 173,667 people, according to the 2010 Census. Its first coronavirus case was reported on March 15; as of July 4, 7,804 people have been diagnosed with the virus and 337 people have died. Like in other states, those numbers likely underrepresent the toll of covid-19 on the Navajo Nation. Still, the statistics are high enough to give it the highest per-capita infection rate in the U.S. 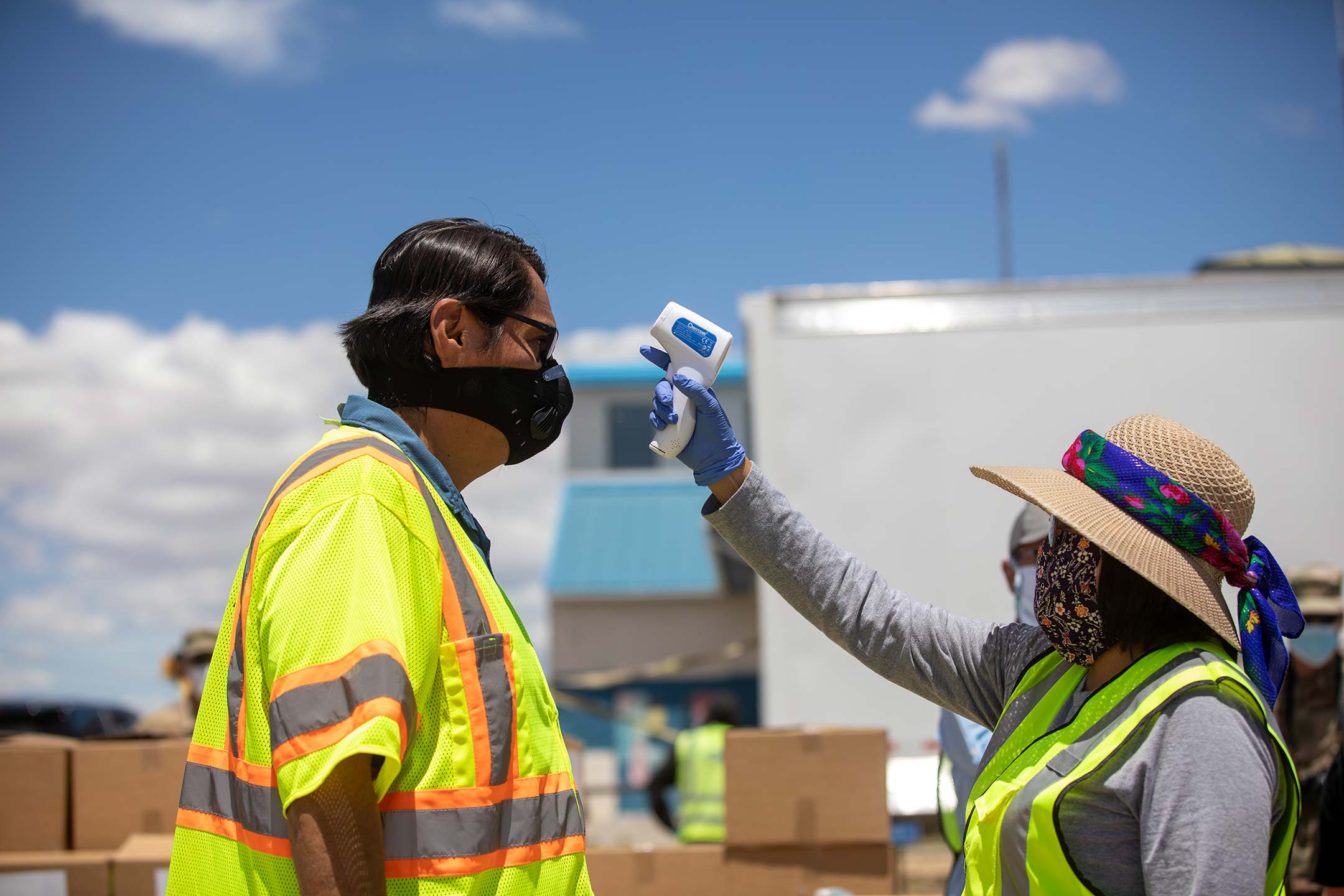 Navajo Nation President Jonathan Nez has his temperature checked while helping to distribute food, water, and other supplies to Navajo families on May 27, 2020 in Huerfano on the Navajo Nation Reservation, New Mexico.

The toll the coronavirus has taken on the Navajo Nation has exacerbated longstanding issues, like poverty and lack of electricity or running water. But it has also weaponized a fundamental Navajo tradition. "Navajos live in a matrilineal society. Traditionally, you move into the wife’s home," Diné College president Charles M. Roessel told the Center for American Progress. "So, you have clusters of homes. That’s one of the reasons why the Navajo Nation has been hit so hard by covid-19. There are not single houses all over the reservation—they are in clusters, intergenerational. You have the parents, the grandparents, and the great-grandparents in a small area."

Young people are now helping care for sick family members, assisting with childcare, and struggling with unemployment. But beyond the direct impacts of the virus on their homes and community, students enrolled at one of Diné College’s six campuses are also “facing the greatest digital divide in the nation," Roessel said, and often must travel 15–30 miles to access the internet for their online classes wherever Wi-Fi may be publicly available.

Diné College received federal stimulus funds from the Coronavirus Aid, Relief, and Economic Security (CARES) Act, which Roessel said the school will “use a huge portion to improve our broadband capabilities.” The school also planned on investing in technology and infrastructure to allow faculty to record their lectures. And Roessel said he will reach out to institutions in Arizona, Utah, and New Mexico to grant online access to Diné students who live closer to those campuses. 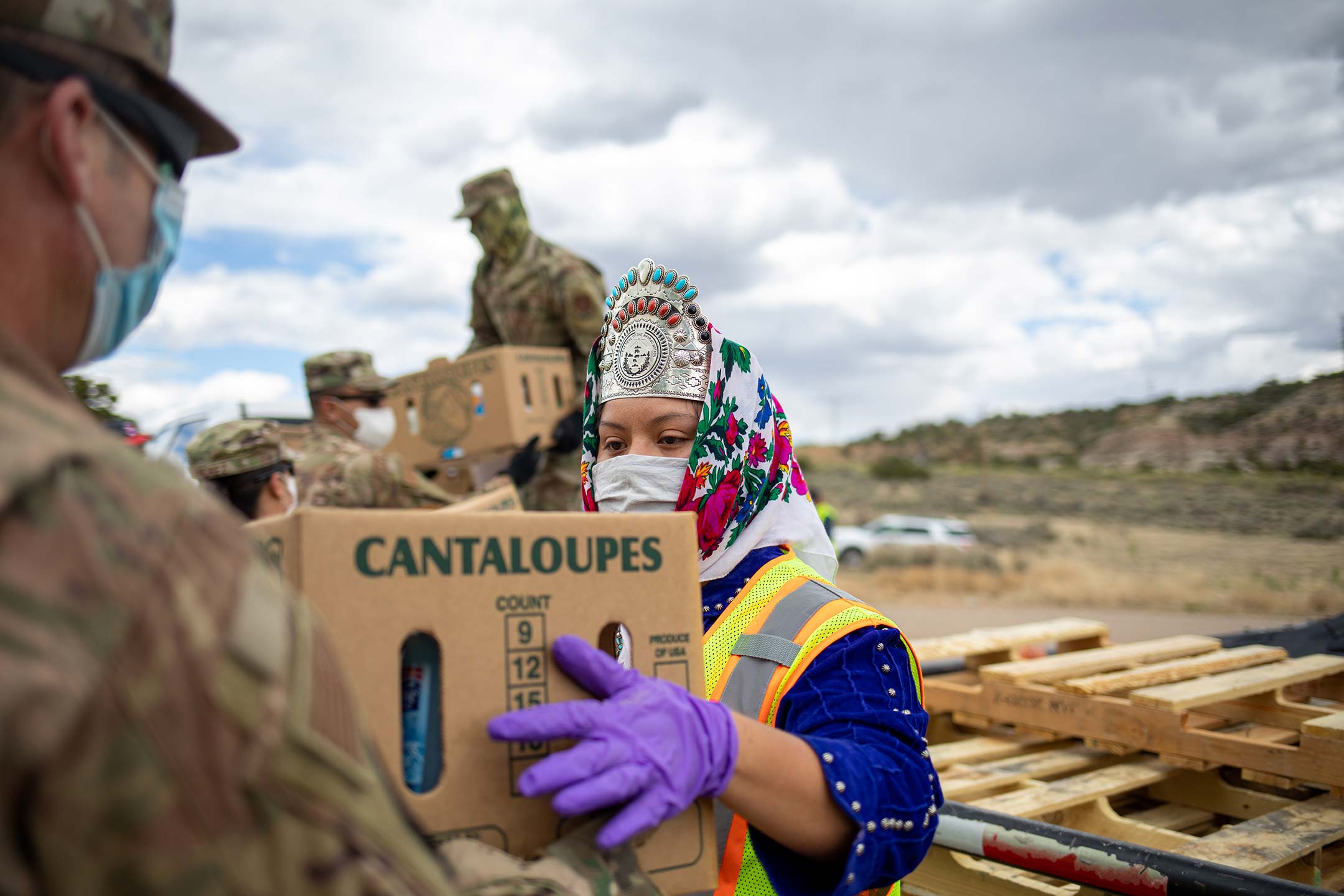 Miss Navajo Nation Shaandiin P. Parrish puts on a white gown to help distribute food, water, and other supplies to Navajo families on May 27, 2020 in Huerfano on the Navajo Nation Reservation, New Mexico.

While the pandemic has shown just how necessary access to technology is, especially for students, the digital divide doesn’t just affect the Navajo Nation. According to an American Library Association report released in October 2018, “nearly 7 in every 10 residents on rural tribal lands remain without access to fixed high-capacity broadband and are cut off from educational and economic opportunities.”

But there’s an opportunity for Native communities to improve its connectivity infrastructure. The FCC has opened the 2.5GHz Rural Tribal Window to allow “Tribes in rural areas to directly access unassigned spectrum over their Tribal lands” via free 2.5GHz spectrum licenses. “The 2.5 GHz band is suitable for both mobile coverage and fixed point-to-point uses,” the FCC states, “and is currently used to provide broadband service by legacy educational licensees and commercial providers that lease the spectrum.”

Access to the 2.5GHz spectrum have the potential to transform communities like the Navajo Nation by allowing them to establish their own high-speed, reliable broadband providers. As High Country News explained, "The 2.5GHz spectrum frequency travels long distances and can penetrate trees and other structures, making it an ideal building block for wireless networks. Tribes could lease the spectrum out to companies like Sprint, which plans to use the licenses to support its growing 5GHz networks, and receive both broadband services and revenue in return. They could also create jobs for tribal citizens by building the networks themselves."

But those benefits have also made 2.5GHz licenses coveted by large telecom companies. The FCC's Rural Tribal Priority Window closes on August 3, and whatever spectrum licenses have gone unclaimed will be auctioned off. 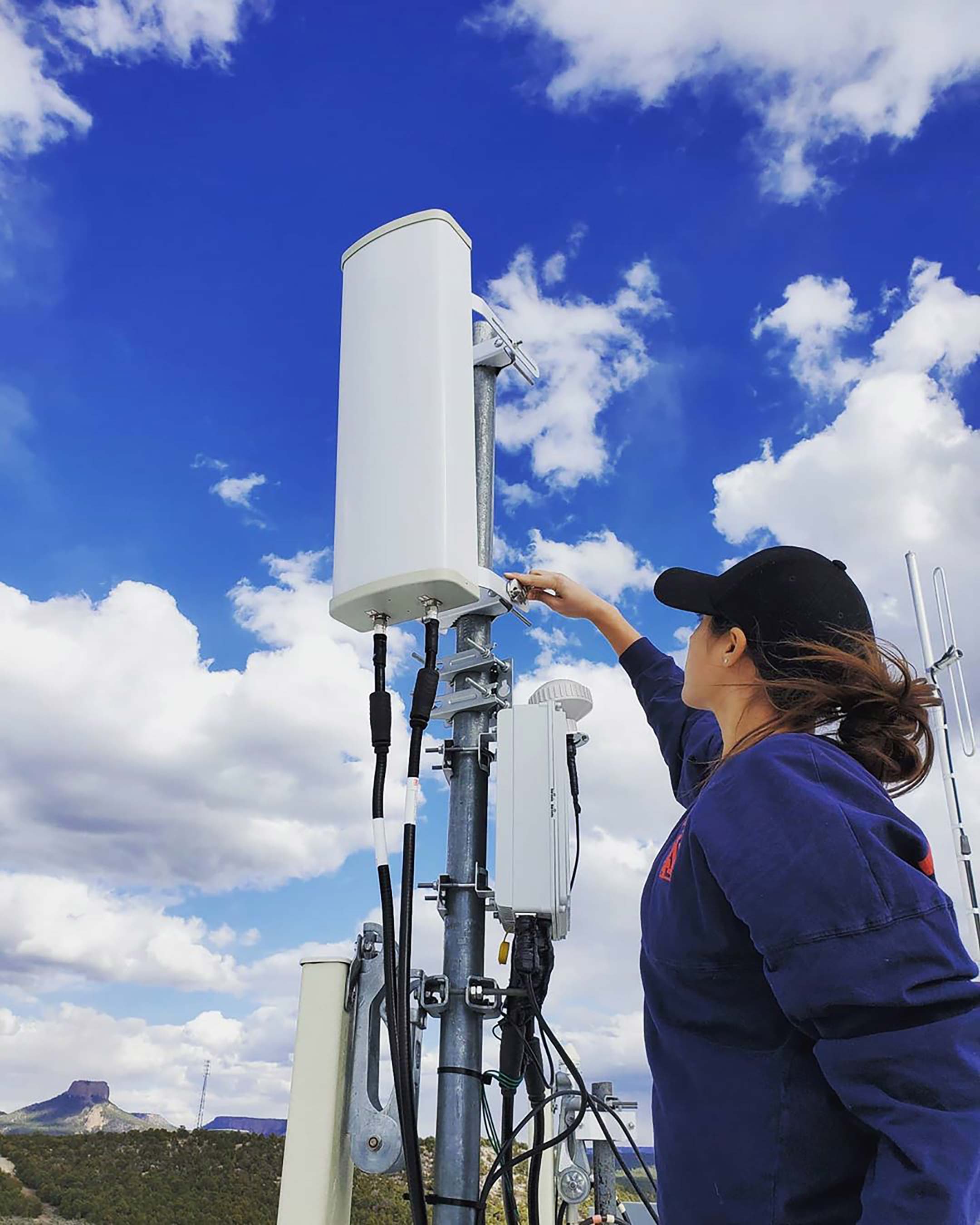 For advocates like Darrah Blackwater, the window should always be open. A member of the Navajo Nation, Blackwater graduated in 2020 with a law degree from the University of Arizona, and one of her post-grad priorities is fighting for "spectrum sovereignty" for tribal lands. It’s work she began when she traveled to Indian country as a volunteer with MuralNet to expand spectrum access and has now taken on greater urgency because of the pandemic.

“I view it, and a lot of other people view it, as a natural resource,” Blackwater told KSUT. “That means that the radio waves on the land have been on the land since what we call in federal Indian law, 'time immemorial.' Which means it's been there as long as the land, the mountains, the water, the air has been there.”

Regardless of the outcome, even a limited opportunity to access the 2.5GHz spectrum to build out new networks could have far-reaching impacts for those who live in Indian country, both in terms of education and jobs. But the key right now is access.

“If tribes don’t get control of their own spectrum,” Blackwater told High Country News, “they’re only going to see the digital divide get wider and wider and wider.”

Hopes, Hoops, and Dreams on the Navajo Nation

The Reappearance of the Vanishing American