Celebrating Sports, Lamenting Meetings, and Mourning Bowling Balls: Five Things That Made Us Smarter This Week

From the freedom of speech to speaking about sports, we learned a lot over the last seven days 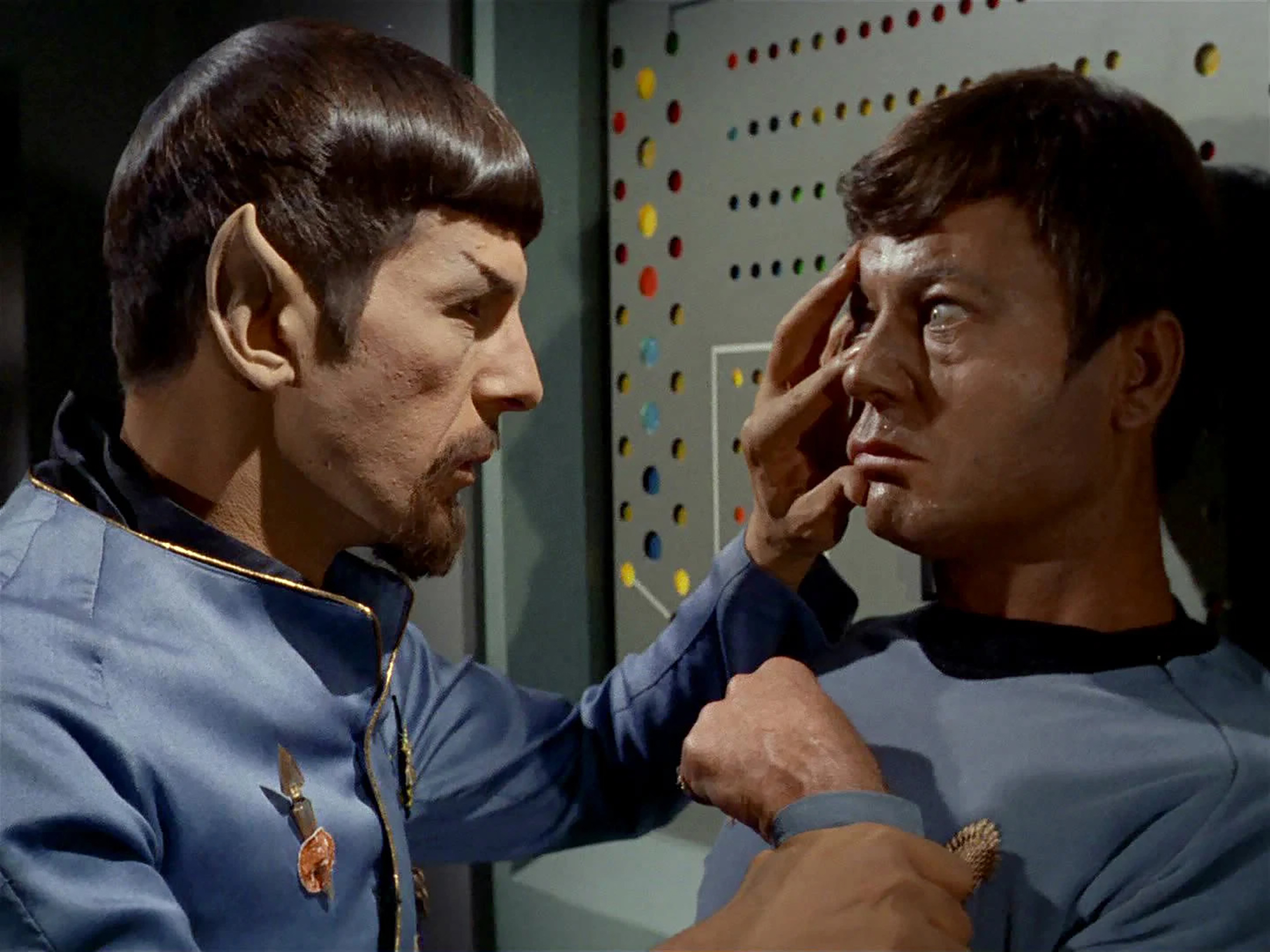 Mind melds can be great catalysts for collaboration. Unless it's with a bearded Spock from the Mirror Universe. In which case, don't take that meeting.

Groupthink, but the Good Kind

Thinking is hard, so we make other people do a lot of it for us. Annie Murphy Paul calls this “socially distributed cognition,” and she argues in her new book The Extended Mind that most of our big problems will get solved not by individual genius but by the pooled intelligence of many different brains working together. In an excerpt published by Wired, Murphy tells the story of an aircraft carrier that suddenly lost power and how the problem required the combined ingenuity of several officers and sailors to set it right. The ability to mind-meld with people around us in pursuit of a common goal is a core human strength, and the study of how individual people turn into a closely linked problem-solving machine is a subject of endless fascination for cognitive psychologists and management consultants alike.

“Our culture and our institutions tend to fixate on the individual—on his uniqueness, his distinctiveness, his independence from others,” Paul writes. “In business and education, in public and private life, we emphasize individual competition over joint cooperation. Individual cognition is simply not sufficient to meet the challenges of a world in which information is so abundant, expertise is so specialized, and issues are so complex. In this milieu, a single mind laboring on its own is at a distinct disadvantage in solving problems or generating new ideas. Something beyond solo thinking is required—the generation of a state that is entirely natural to us as a species, and yet one that has come to seem quite strange and exotic: the group mind.”

If that sounds like something out of a creepy science-fiction story, consider for a moment all the things in your daily life you don’t understand. Do you know how a car works? How electricity gets into your phone? The math behind cell-tower triangulation allowing your phone to give decent directions while you’re driving that car? You’re already living inside of a group mind, the collective intelligence that makes civilization go. Think hard about where you want to contribute. —Eric Johnson 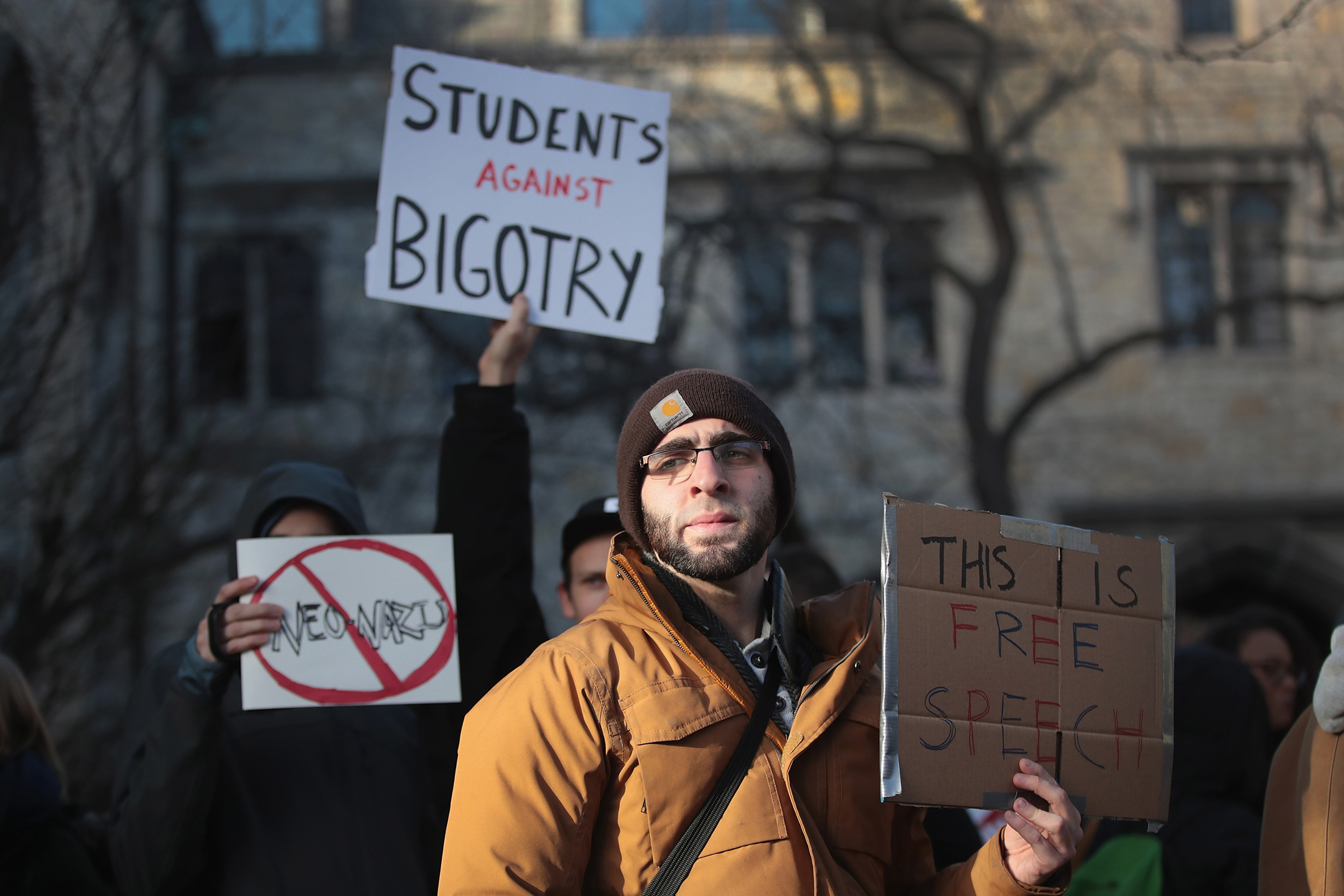 Demonstrators protest a visit by Corey Lewandowski, President Donald Trump's former campaign manager, at the University of Chicago on February 15, 2017 in Chicago, Illinois.

The Foundation for Individual Rights in Education (FIRE) plays a unique role in American education. The group isn’t partisan, though they’re frequently drawn into conflicts that have a partisan flavor. And they end up taking positions that annoy almost everyone involved in the campus culture wars, which seem to be intensifying. That’s because FIRE president Greg Lukianoff stays laser-focused on defending basic constitutional rights for students and teachers across the country. They sue to strike down speech codes, to prevent universities from punishing students for political speech, and to protect the academic freedom of professors. Sometimes that places them on the side of conservative groups and sometimes left-leaning causes. The cases change, but the underlying principal doesn’t. “I think everyone understands that they have a free-speech right, but they don’t necessarily understand why you should have one,” Lukianoff told The New York Times in 2016.

In a piece for the online newsletter Persuasion, Lukianoff makes the case for 10 reforms needed to prepare students for a contentious world. From cultivating a sense of curiosity to taking mental health more seriously, he thinks school administrators from K12 on through college need to stop trying to quell controversies and do a better job of helping students navigate a messy landscape with confidence. “Be willing to form new institutions that empower students and educate them with the principles of a free, diverse, and pluralistic society,” Lukianoff writes. “Is this a formula for peace and quiet? No. But free societies aren’t supposed to be particularly quiet.” I don’t agree with everything in the piece—but isn’t that the point?  I’m glad to see this conversation gaining traction. In my experience, teachers want a healthy classroom debate, and they know that democratic citizenship requires a tolerance for dissenting views and skeptical voices. FIRE may be an “irritant” to administrators, as the Times notes, but it has been a consistent ally to students and an ardent defender of democracy's most difficult disciplines. Protecting speech and freedom of conscience is easy when you agree with the cause; it's much harder when you don't. Lukianoff and his colleagues know that citizenship in a big and fractious country asks a lot of us. And they want students to be ready. —Stefanie Sanford 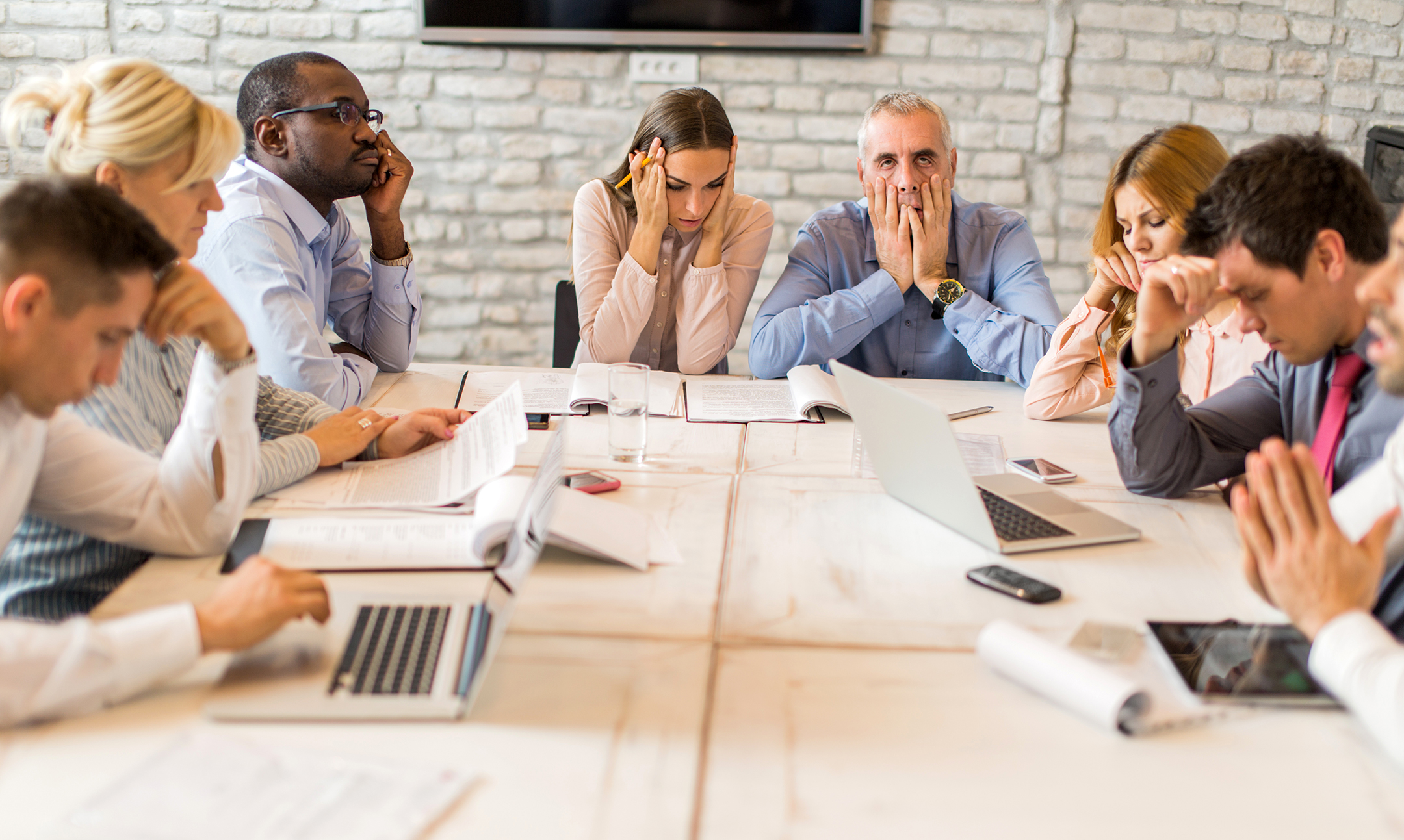 When everyone realizes this meeting could've been an email. Been there. Been. There.

Meetin’ to a Pulp

"Meetings. Why?" In that simple, two-word headline, New York Times writer Caity Weaver sums up so much white-collar ennui and exhaustion. Meetings. Why? Why indeed? Weaver's pithy piece is ostensibly a means to unpack our obsession (and exasperation) with meetings—and stand-ups and check-ins about meeting ahead of that meeting that's happening in a couple weeks. And it's a story that takes wild turns into history, from the place of "councils" in ancient Egyptian culture to George Washington holding his first Cabinet meeting (in a stuffy room baking in the heat of Philadelphia summer) strictly out of necessity. "One sees how a group of individuals erecting the literal and figurative architecture of a new government without the use of telephones or computers might benefit from convening in person to hash things out," Weaver writes. "But why is everyone else’s calendar filled with meetings?"

In investigating that question, Weaver unpacks the development of human resource departments and, shockingly-but-not-really, the weaponization of our birthdays. In mid-century America, HR was there to help managers ensure the office celebrated an employee taking another turn around the Sun—which led to all sorts of meetings. "The other thing humans love, besides their own birthdays: being acknowledged by other humans," Weaver writes. "Meetings provide opportunities for employees to be consulted in front of others, to have their presence expressly requested and to be invited to meetings." Very true! Collaboration is indeed fantastic. But what this all comes down to is a simple truth: "A meeting can be good," Weaver writes, summing up the research of Harvard Business School professor Dr. Tsedal Neeley "but only if it needs to be a meeting." There's a lot to this story, maybe too much, and I certainly closed the browser tab feeling much smarter about office culture writ large. Anyone who has ever watched Office Space and felt simultaneously seen and disgusted that they feel seen should schedule some time for a meeting with themselves to read this piece. —Dante A. Ciampaglia 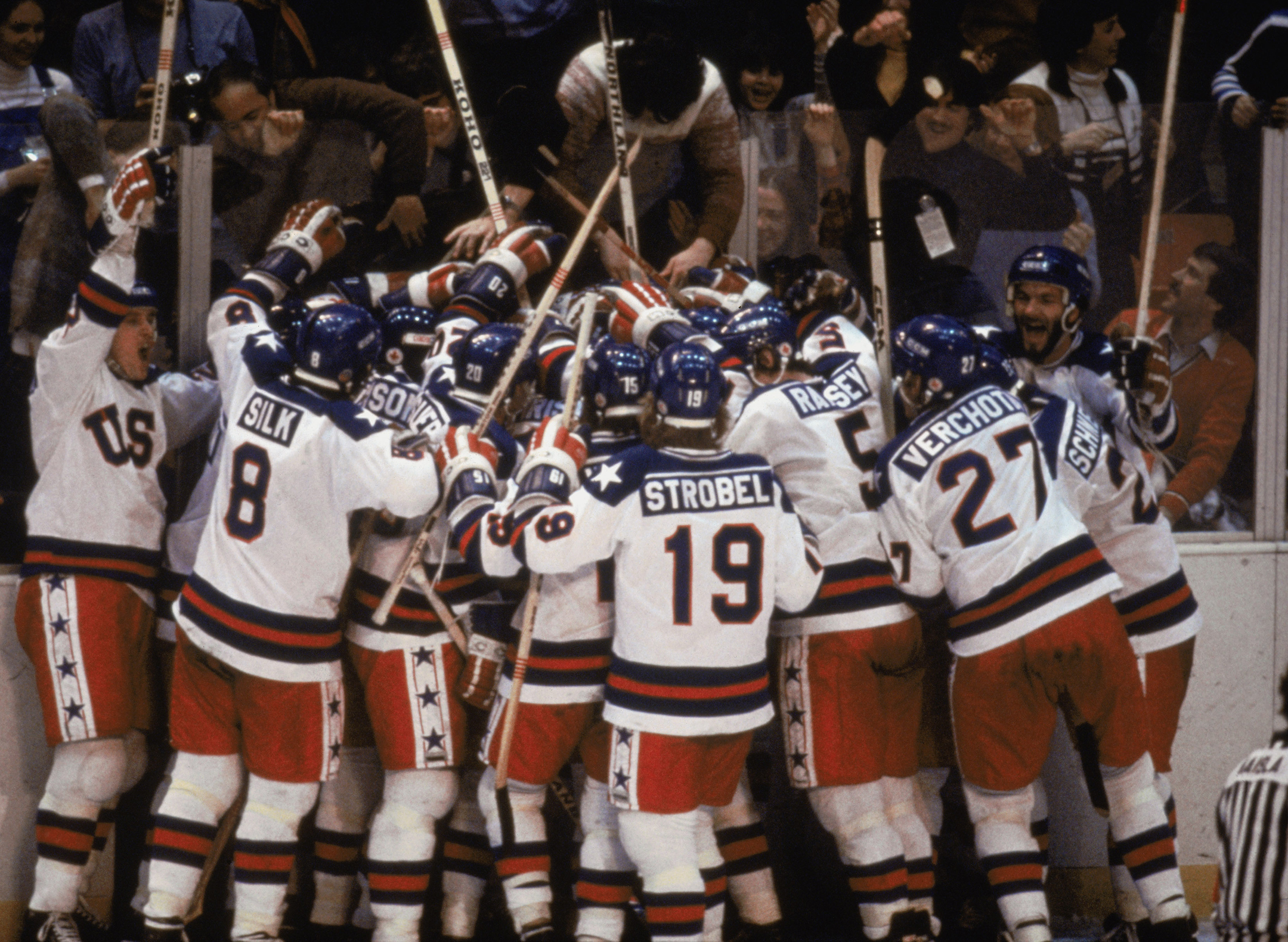 Team USA celebrates their 4-3 victory over the Soviet Union in the semi-final Men's Ice Hockey event at the Winter Olympic Games in Lake Placid, New York on February 22, 1980. The game was dubbed "the Miracle on Ice."

Sports Talk, but the Good Kind

I am not much of a sports fan. I enjoy basketball or (some fraction of) football games if I’m watching with friends, but I don’t obsessively follow any teams and I’d never sit down and spend a couple hours on a game by myself. The amount of mental and emotional energy that sports occupies for millions of people has long been a mystery to me. So when I got a magazine assignment to write about Matt Andrews, a history professor with a new podcast called American Sport, I wasn’t immediately thrilled. I imagined a more scholarly version of sports radio, where guys can yammer endlessly about pre-season plans and player prospects.

The podcast is nothing like that. “I hate sports radio,” Professor Andrews said when we talked earlier this week. “But I love stories. And sports is full of great stories.” The show, which is drawn directly from Andrews’ class lectures, centers around big historical themes. Worker rights and economic power, as revealed through the century-long fight over baseball’s reserve rule. The Cold War, as reflected through the Olympic rivalry between the Soviet Union and the United States. What the perpetual search for a “great white hope” in various sports says about the nature of racism in American media. Andrews unpacks these huge ideas through human-scale narratives, which is what make his class one of the most popular at UNC Chapel Hill. And for someone with zero interest in pre-game shows and half-time analysis, it made American Sport a surprisingly fun listen—and a reminder that great teachers can make any subject compelling. “Everything is the past!” Andrews said. “History can be almost anything you’re interested in.” —Eric Johnson 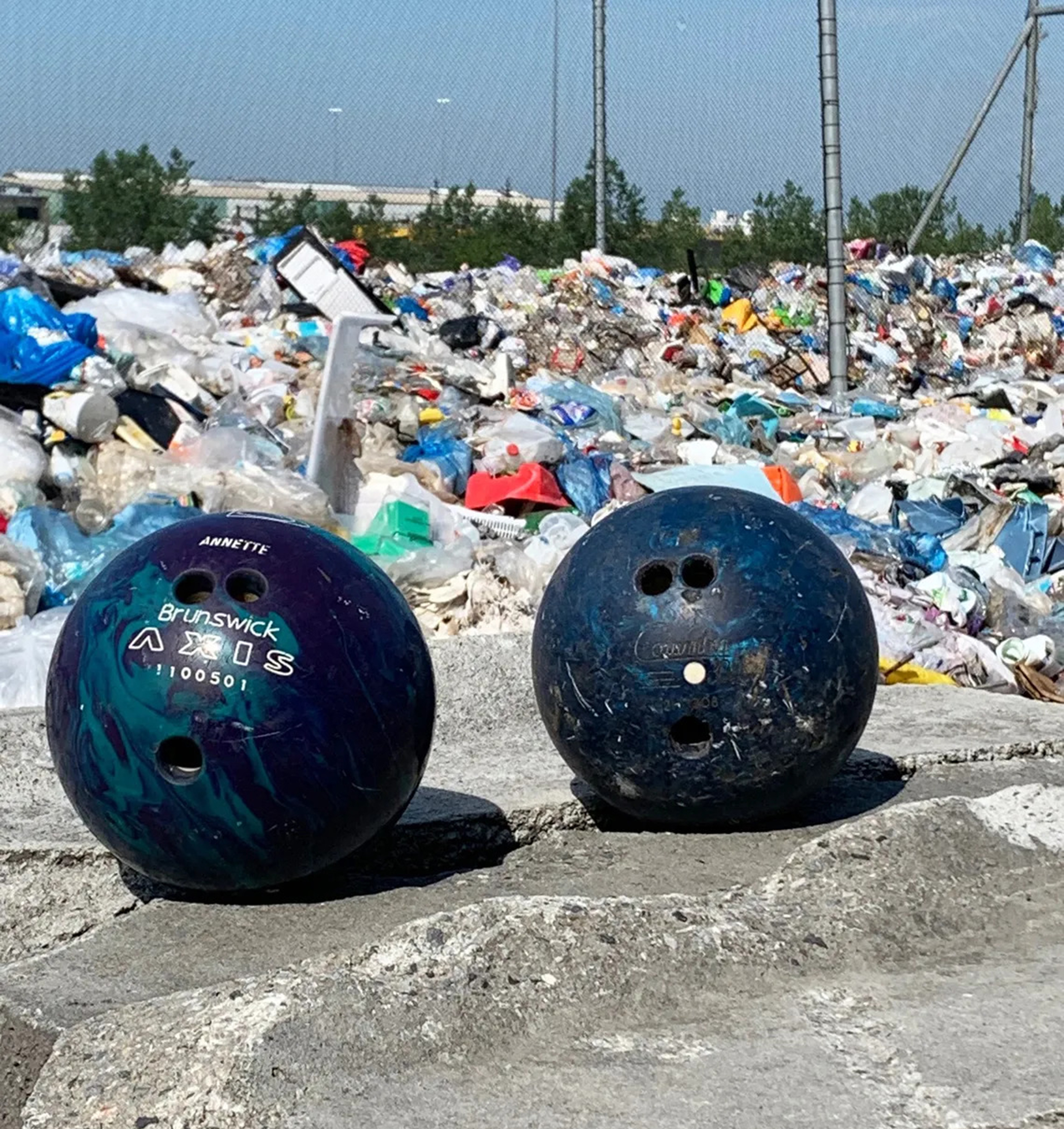 Trying to recycle those old bowling balls? Over the line!

As a native Western Pennsylvanian, I’m legally obligated to enjoy bowling. But that’s OK because I genuinely love it. I bowled all the time with my dad and brothers. I bowled for credit in high school. (My best game: 220.) When my wife and I started dating, our Thursdays were ‘80s bowling at Arsenal Lanes. I even had my own ball: this light blue orb inscribed with my name and with custom-drilled finger holes. Unfortunately, I got it when I was a pre-teen and I outgrew it (the holes and the lightness) fairly quickly. Not once did I ever think about where it went once it was extracted from the recesses of our basement—that is, until I read Eleanor Cummins’ fantastic piece on Curbed about all the New Yorkers who try to recycle their old bowling balls.

Sims Municipal Recycling in Sunset Park, Brooklyn, is the “country’s largest recycling facility of its kind,” Curbed reports, “sorting more than 1,000 tons of New York City’s metal, glass, plastic, and paper each day on 2.4 miles of conveyor belt.” That includes “an average of three to four bowling balls a day, or roughly 1,200 per year.” If you’ve ever handled a bowling ball, that number should boggle your mind; it certainly threw mine for a 7-10 split. But even more interesting is why people think they can recycle them (most are mostly plastic) and why they ultimately end up in landfills (bowling balls are not easily stripped to their component parts). Cummins sets up a full rack of stories—about the environment, about physics, about pro bowlers, about sports culture—and nails every one. Perfect articles are rare, but this one’s a 300. —Dante A. Ciampaglia