After closing due to coronavirus concerns, some colleges and universities find digital ways to celebrate their graduating students

College commencement ceremonies typically consist of a mass of graduates sitting together in caps and gowns, listening to speeches from administrators and famous guests, and humming along to "Pomp and Circumstance" while they wait their turn to claim their diplomas from a school bigwig.

But not this year.

The COVID-19 pandemic has forced the suspension, or outright cancellation, of in-person classes and other activities, including graduation ceremonies, at colleges and universities across the country. But in the same way that lectures have moved online, some commencement activities will be digital events.

After Purdue University canceled its series of six in-person ceremonies, which would have taken place on May 15–17, university president Mitch Daniels announced that those graduations will instead be conducted virtually. This year's 6,000 graduates still have the option of partaking in a future in-person ceremony, but Daniels promised that "we are hard at work to create a special, memorable and fun virtual experience for you and your families as an option for this May."

Purdue gave a preview of what that experience might look like back in February, when it announced that more than 75 of this year's 400 Purdue University Global graduates would virtually take part in that school's Los Angeles commencement ceremony.

"Each of the graduates participating virtually will receive a Purdue University Global–branded headset to use during the ceremony, as well as a commencement program, tassel and honor cord, if applicable," Purdue said in its announcement. "In Los Angeles, a camera operator will provide 360-degree views—via an Insta360 Pro 2 camera and streamed live on YouTube 360—and the experience will be launched from Purdue Global's internally created conference center, PG Connect. A traditional single-view video feed also will be provided via Facebook Live for anyone to watch." 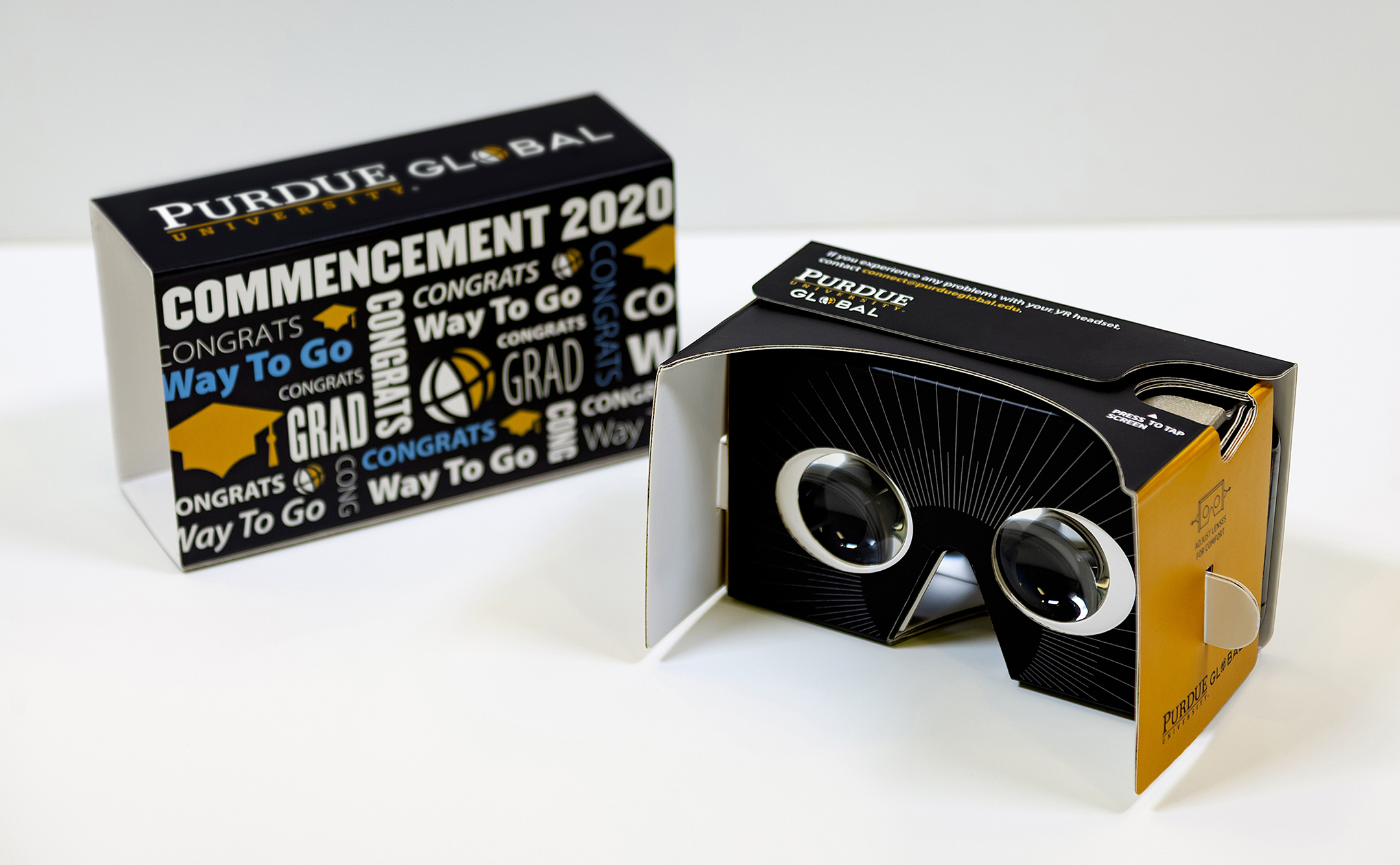 Examples of VR headsets that Perdue planned to distribute to more than 75 Purdue University Global graduates so they could participate in their commencement ceremony virtually.

Patti Pelletier, director of the learning and leadership community for Purdue University Global, said the university spent almost two years developing the virtual ceremony with its research computing Envision Center. "Like our graduates, we persisted toward our goal and discovered other benefits our Purdue Global community can build on for the future."

It's unlikely anyone at Purdue expected that future to arrive so quickly. But its work preparing for a VR graduation for some of its students allowed it to consider a virtual experience for all of them. It's an idea that seems to work for its students, but other schools that have looked to technology for a way to create a virtual graduation have met with tough resistance.

University of California, Los Angeles Chancellor Eugene Block recently announced his school's intent to conduct virtual graduations later this spring. The plan proved so unpopular with students that Block reconsidered and went so far as to apologize on Twitter.

"We've heard your voices and will step back and make a decision on commencement in consultation with students," Block tweeted. "We're guided by safety, but should have known this decision would hit hard, and listened first. For that, I am sorry. We'll endeavor to do better."

Student-driven pushes to delay graduation ceremonies rather than conduct them virtually have touched campuses across the country. A petition circulated at Georgetown University to delay rather than go virtual. Northeastern University will go virtual rather than delay. And Harvard University announced it will hold a virtual ceremony on May 28, followed by an in-person ceremony at a later date.

Even with virtual ceremonies scheduled, students know it won't be the "real thing." At Purdue, students shifted to virtual classrooms for the remainder of the spring semester over COVID-19 concerns, and they were encouraged to move out of residence halls and back home if they were able. The Lafayette Journal & Courier interviewed two such students, who seized their last chance to pose for postgraduation-style pictures in their caps in front of the local Gateway to the Future Arch before heading home.

"We are all leaving too. (We're) going to just study from home, so this is our last chance to get the pictures," senior Kunj Samani told the paper. Fellow senior Meghna Alturi added, "We know we won't come back."