Mandatory face masks, half-full classrooms, social distancing—the daily learning experience will likely look very different when high schoolers return to schools this fall. And anyone wondering what post-pandemic in-person learning will look like can look to school systems in other parts of the world for a preview of what's to come.

In South Korea, students left for spring break in February and returned to online classes in April. In mid-May, seniors were the first to return to actual classrooms, where they utilized clear plastic partitions on desks, tables, and in cafeterias to ensure hygienic social distancing. New Zealand and Australia put extra emphasis on students using hand sanitizer before entering the classroom and increasing the frequency that shared spaces were cleaned. Chinese schools in cities like Shanghai reopened with body scanners to test the temperatures of students and staff for possible coronavirus symptoms.

Unlike their counterparts in other nations, American students have been out of physical classrooms for three months and have relied on distance and remote learning to complete their school year. So when they’re allowed to go back, and after temperatures are taken and partitions are erected, how different will the learning experience be? 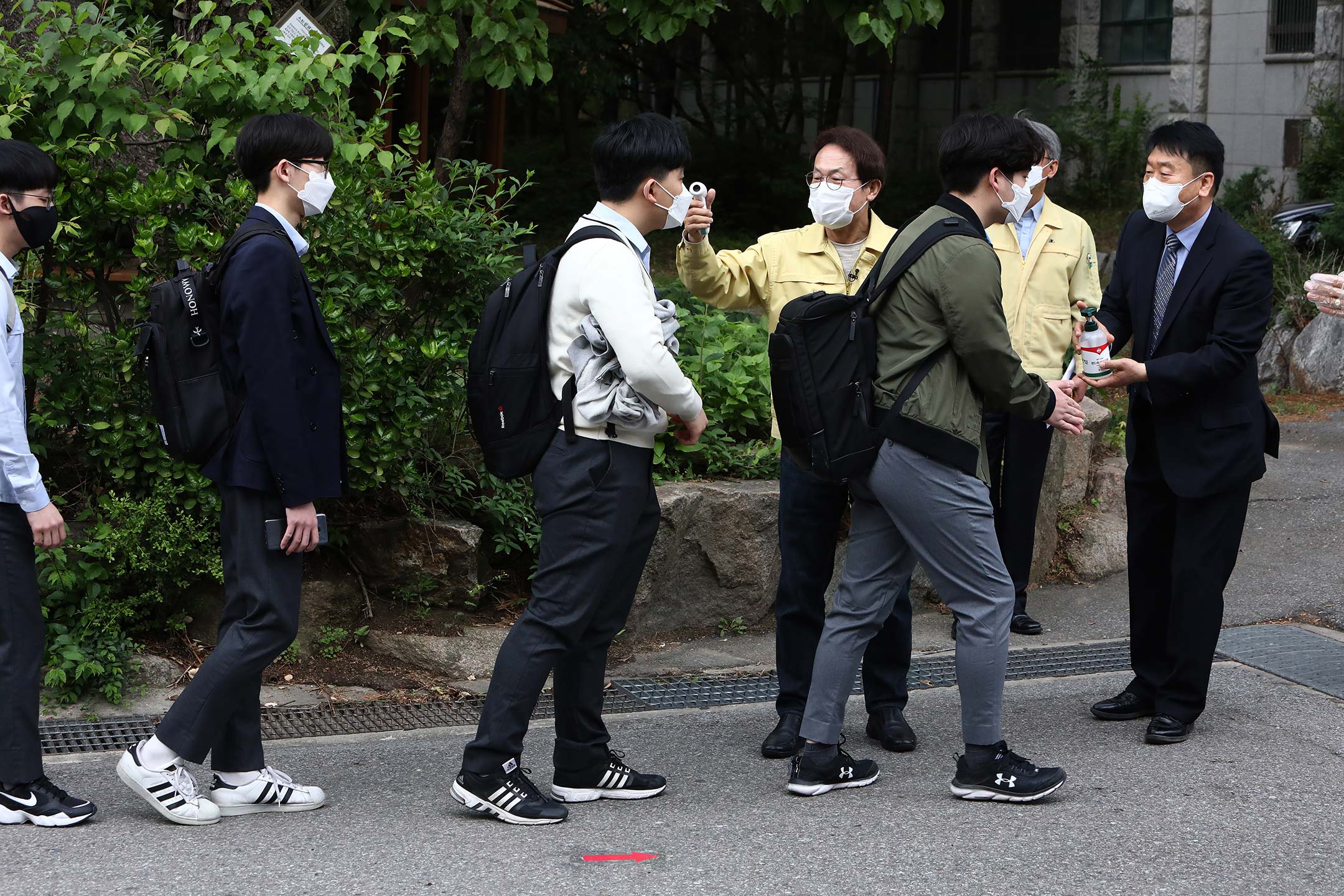 Cho Hee-yeon, Seoul Metropolitan office of education superintendent checks the temperature of student while back to school at Kyungbock high school on May 20, 2020 in Seoul, South Korea.

In a recent article for Education Week, teacher Gina Denny gave six ideas for pandemic teaching changes, ranging from the use of new grading policies and home-based performance tests to videos from real-world professionals and training students in programs like Microsoft Word. Denny also suggested increased use of digital platforms like Google Classroom for delivering lessons, which would help high schoolers become more proficient in an online class format utilized by a growing number of colleges.

While distance learning can’t replace the value of in-person instruction, some districts are faced with the reality that reopening in the fall might not be possible—especially if the costs to implement new safety measures prove daunting.

Santa Rosa, California, has the largest school district in Sonoma County, with 16,000 students and a staff of 1,600. Superintendent Diann Kitamura told The Press Democrat that it was “questionable” whether schools would reopen on time in mid-August. The reason: state budget cuts made in response to pandemic-related budget shortfalls have made it difficult to put in place the health and safety measures required to allow kids back into the classroom.

A 200-person committee is working on a plan to safely reopen Santa Rosa City Schools, given the realities of the virus and funding needs. But Santa Rosa Teachers Association president Will Lyon told The Press Democrat that it’s not as simple as handing out face masks and disinfectant wipes. “It’s 10 times more complicated than that,” he says. “When you are actually in a school setting, it’s the exact opposite of social distancing. What number of students can you put in a classroom and maintain social distancing? Because they are children, that number might be zero.”

In Texas, a state that has moved more aggressively to reopen, the 600-student Premont Independent School District has experimented with returning to in-person learning. On June 1, it brought 80 students of various ages back to its two school buildings for a four-day trial reopening. The Texas Tribune notes that these students were “handpicked by their principals as needing extra learning, they will serve as test cases for a superintendent eager to get instruction running, and confident he can keep them safe.” 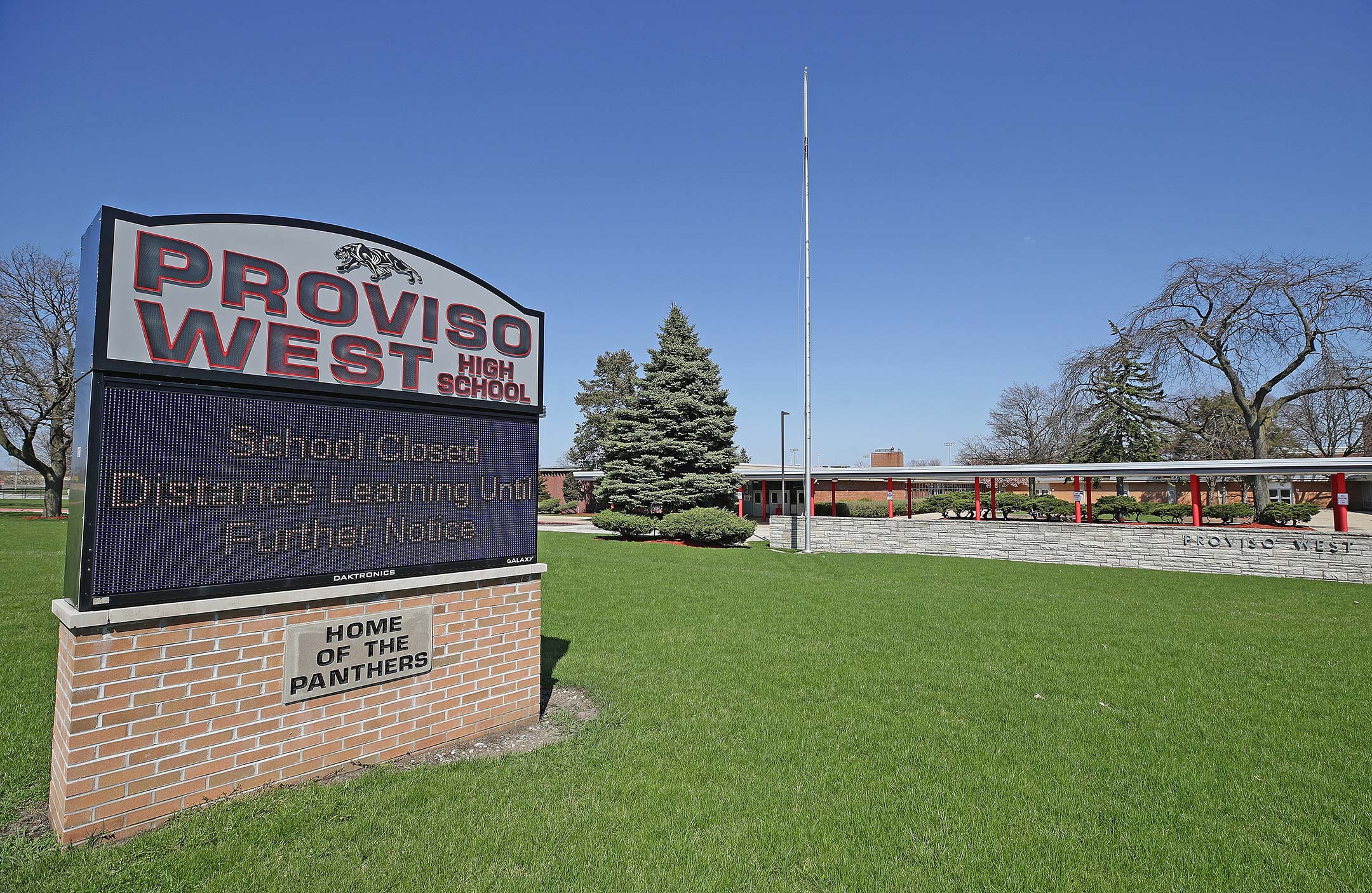 A sign urging students to use distance learning is seen at closed Proviso West high school on April 18, 2020 in Hillside, Illinois.

Confident, but not certain. The district is taking precautions, such as taking students’ temperatures before they enter school buildings (with parental permission), making face masks optional but available. But superintendent Steve VanMatre told the Tribune that the district still faces numerous questions, especially as it prepares for an optional two-week summer school session that begins in mid-June. “One of the questions that we haven’t answered yet is: what do we do when one of our students in these phases tests positive? Do we shut everything down? Do we quarantine the class? What about community spread?’ VanMatre said. “I’ve asked it several times but I just haven’t gotten the response that makes me feel comfortable.”

In Florida, another state that moved quickly to get back to business, the Marion school district has begun a four-part, sports-themed plan to allow teams, student groups, and summer activities to resume. The plan, as reported by the Ocala Star Banner, is designed to mimic the four quarters of a football game. In the first quarter, staff and coaches were trained virtually. The second quarter, which just began, limits the size of groups 10 students and one adult and the amount of time they can meet to 90 minutes once a day, and this can only occur outdoors. The third quarter, which school officials hope to kick off on June 22, expands outdoor group sizes to 50 people, while also allowing no more than 10 students to gather together indoors. The district hopes to enter the fourth quarter on July 27, which will allow for competitive drills and team practices.

The district hopes for a smooth transition between quarters. Still, they’re cautioning students and families to be patient—to trust the process. “Parents must understand the opening will not be at pre-March (participation) levels,” school board chairman Eric Cummings told the Star Banner.

That’s advice that will resonate around the country as states, cities, and schools begin the difficult, necessary work of reopening.