In December, the College Board published research gauging the impact of AP Computer Science Principles in the four years since its introduction. Data showed that students who took the course were three times as likely to pursue computer science in college, with notable impacts on first-generation, Black, Hispanic, and female students. When it comes to that last group, researchers found that while 24.3% of AP Computer Science A students were female, the number jumps to 31.8 for AP CSP. While there’s clearly still work to do to reach gender parity in computer science education, those numbers—especially around AP CSP—represent a significant improvement over where things stood 15 years ago.

For the July 1997 issue of The College Board Review, Heinrich Stumpf, a senior research associate at Johns Hopkins University’s Institute for the Academic Advancement of Youth (IAAY), and Julian C. Stanley, a Johns Hopkins professor of psychology and the director, Study of Mathematically Precocious Youth (SMPY), reported on the results of research assessing 13 years of AP Computer Science courses, from their launch in 1984 through 1996. What they found isn’t surprising. “Despite the initially low proportion of women (15 percent in 1984), there is a downward trend in the percentage of women over the 13-year period,” they wrote. “In 1993 and 1995, women comprised only 11 percent of the AP Computer Science AB examinees. A somewhat larger percentage (17-22 percent) of women took the AP Computer Science A Examination from 1991 through 1996; but still, the underrepresentation of women is alarming.” But there is one line that resonates just as strongly today as it must have 24 years ago: “[Computer science] appears to be so strongly gender-typed that some researchers have argued that there is a ‘stereotype threat’ that causes women to perform less well than men on a variety of computer-related tasks.”

The “gender-typing” of computer science is so ingrained in our culture and popular imagination that it has been treated as a given: coding and programming is work for dudes; women who want to get into it are threats to the natural order. The problem is that coding and programming were once the domain of women, and men more concerned with making deals and taking credit were happy to leave the grunt work of creating punch card programs for massive computers to the “girls.” It was only when men saw that there was glory (and money) to be had in that work that they got involved, pushed women out, and began rewriting computer science history to exclude women—and keep them out.

That narrative is changing, as the new College Board research—and the proliferation of histories and memoirs about women in tech—prove. But there’s still a ways to go, and this 1997 article still feels like required reading for highlighting the opportunities in getting more young women involved in computer science—and the perils of easing up on the work because the numbers seem to moving in the right direction. 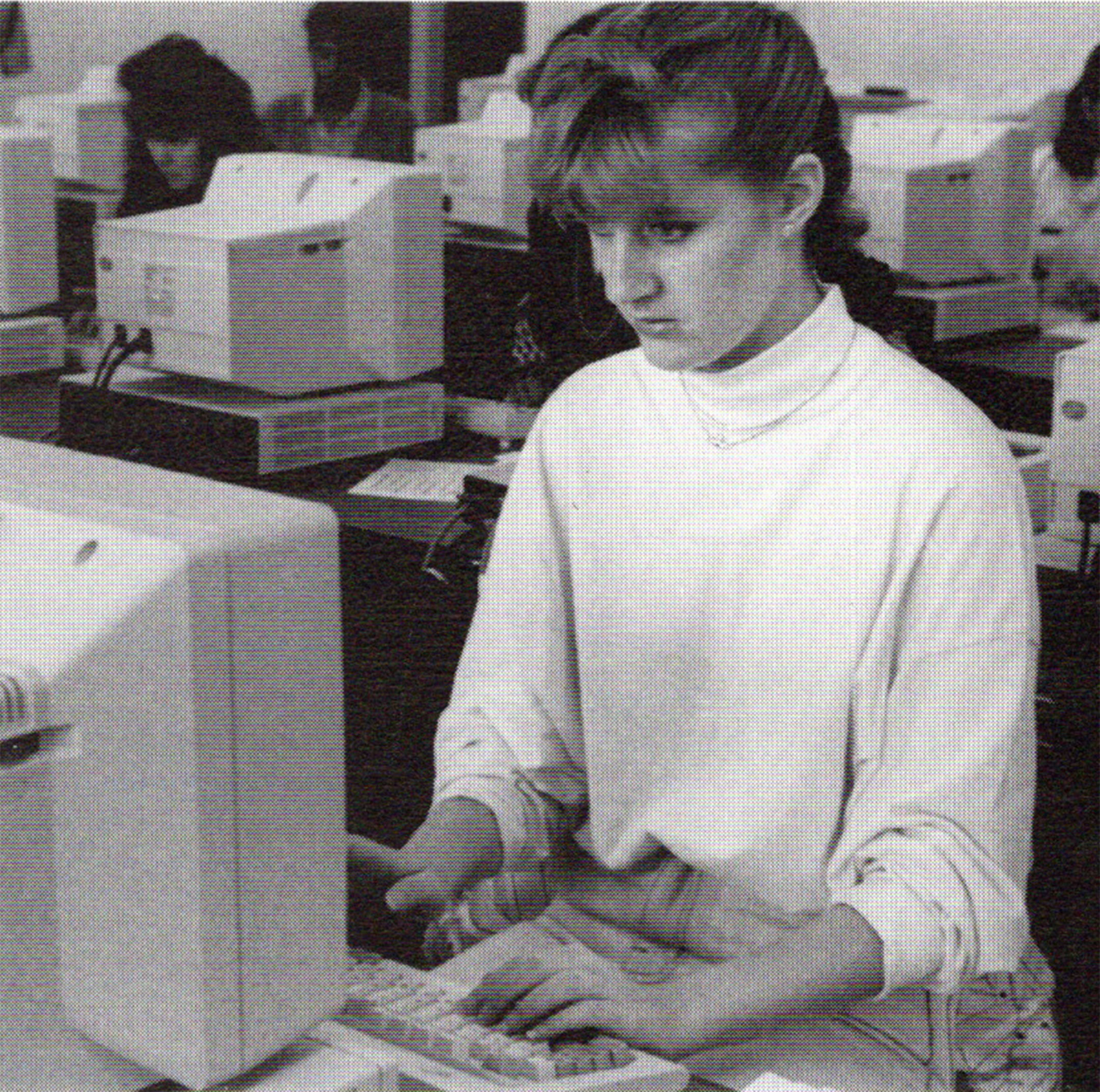 Some say there is a "stereotype threat" that causes women to perform less well than men on computer-related tasks.

The world of computers is often viewed as a "male" domain. While it is true that many women use sophisticated software such as text editors, activities that are more directly related to the machine, such as programming and developing hardware, are more often engaged in by men than by women. Starting in elementary school, male students show a stronger preference for computer-related activities, are more confident with respect to computers, and experience somewhat less anxiety working with them.1 There is also evidence that, at the elementary school level, boys are treated differently from girls in computer classes. One study found that teachers spend more time interacting with boys than with girls in computer classes.2

In addition, many more young men than young women attend computer camps, enroll in computer classes,3 take computer-related achievement tests such as the Advanced Placement (AP) Examinations in Computer Science,4 and major in the field in college. Therefore, it comes as no surprise that women are underrepresented in computer science throughout undergraduate training,5 and, not unexpectedly, that many more men than women take doctorates in computer science.6 The low participation of women in the study of computer science has been observed not only in the United States but also in other countries.7 The field appears to be so strongly gender-typed that some researchers have argued that there is a "stereotype threat" that causes women to perform less well than men on a variety of computer-related tasks.8

Among the most important measures of performance in computer science are the two AP Examinations in Computer Science. Performance on these examinations may influence admission to and course placement in academically selective U.S. colleges and universities.

A consistent finding of the research on gender-related differences in performance on AP Examinations has been that these differences tend to be more pronounced on multiple-choice than on open-ended tasks.9 There is controversy, however, about whether or not, during recent years, the differences in performance between men and women have narrowed. Linn asserted that "the gender gap in achievement is closing,"10 but in the same volume Cleary concluded that "no consistent trends are evident over time."11 We had found, in our 1996 study, that across 38 AP and College Board achievement tests, gender differences in performance remained fairly stable from 1982 through 1992. On three tests, however, American History and AP Computer Science A and AB, the traditional advantage of men decreased considerably.12

This article reports the findings of a study that examined gender differences in enrollment and performance in AP Computer Science from 1984 (when the first of the two tests was introduced) through 1996, with particular emphasis on long-term trends. Our focus was on whether the findings on AP Computer Science, which we reported in 1996, can be substantiated with new data.13

Design of the Study

Advanced Placement Computer Science AB covers the first two college semesters of the subject. Many colleges award two semesters of course credit for good performance on the examination, typically for a grade of at least 3 or 4 on a scale that ranges from 1 ("No Recommendation") to 5 ("Extremely Well-Qualified"). AP Computer Science A, introduced in 1991, covers the first college semester of the subject, and a student who performs well on the examination may earn one semester of college credit. Individual colleges set their own policies on awarding credit and/or placement for successful performance on AP Examinations.

The distributions of grades for men and women on the AP Computer Science Examinations were taken from information supplied by the College Board. These data show the number of men and women receiving grades of 1 through 5.

Men consistently outperformed women on all the AP Computer Science Examinations from 1984 through 1996. This is uniformly documented by all the measures considered here. The degree of the male advantage, however, varied considerably over time, with larger differences in performance in the early years and smaller differences in the later years. The differences in mean grades, or d's, showed a downward trend, with a maximum of .59 for 1984 and a minimum of .16 for 1996. (In the present context, d's from O to less than .20 can be considered negligible; d's of .20 through .49 are regarded as small, though systematic; d's of .50 through . 79 are considered to be of medium size; and d's of .80 or more can be regarded as large.15) Figure 1 shows that the values seldom deviated from a straight linear drop.

The ratios comparing the percentages of men and women earning the highest grade (UTR) and lowest grade (LTR) on the AP Computer Science AB Examination show a similar pattern. Clearly, there was a pronounced decrease in gender-related differences in performance from 1984 to 1996.

Men had a greater advantage on the AP Computer Science A (one-college-semester) Examination than on the two-semester AB Examination. Here too, however, there was a clear downward trend on all measures over the years (see Figure 2).

The decline of gender-related differences in performance was also reflected in the ratios that compared the percentages of men and women who earned qualifying grades (QRs) for the AP Computer Science AB Examination. 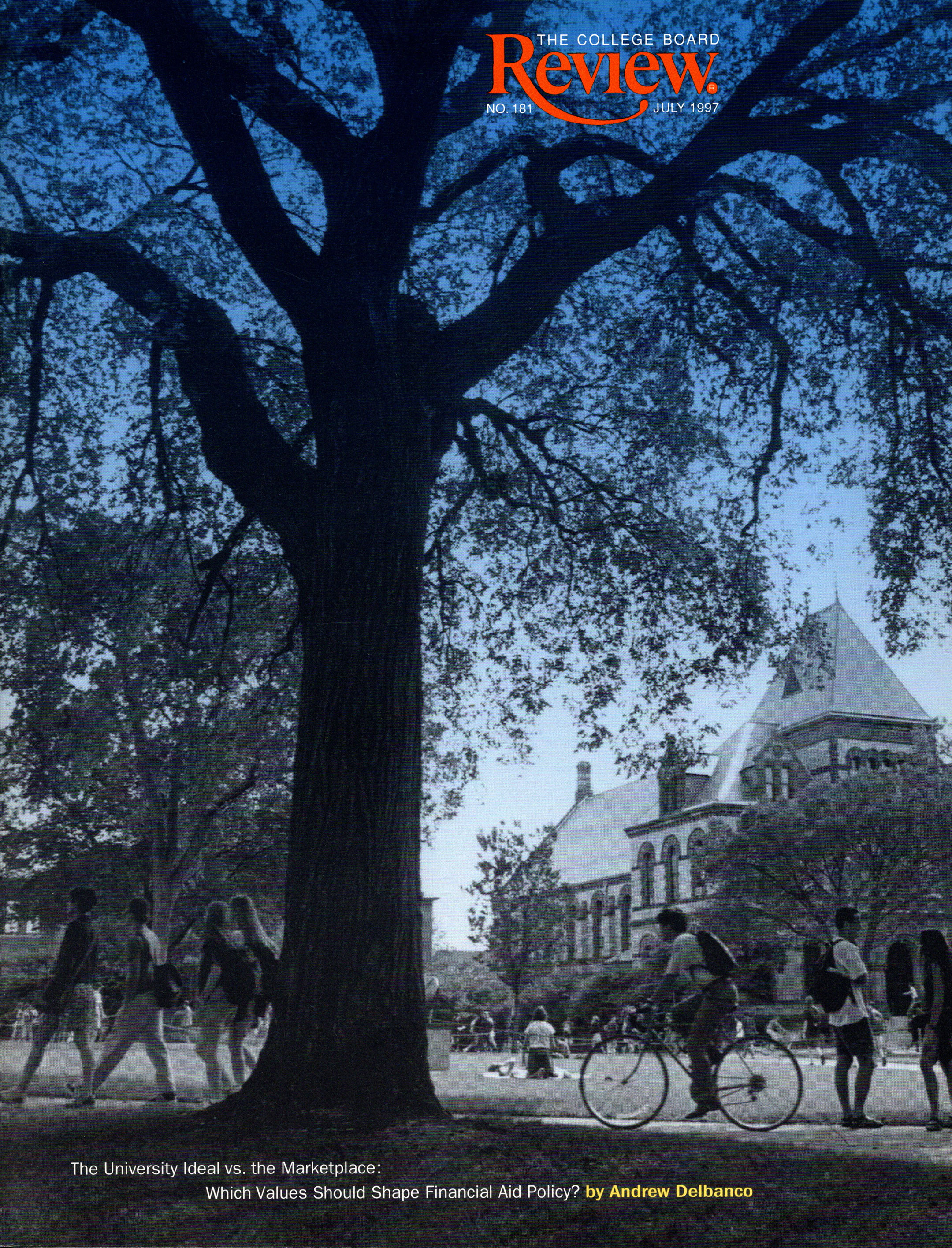 Stability and Change in Gender-Related Achievement

Many more men than women have taken the AP Computer Science Examinations since their introduction. However, the grades of men and women have become more and more similar over time. On average in the last few years, men had very small (but still consistent) advantages over women in AP Computer Science AB. In AP Computer Science A, the overall participation of women was somewhat higher than in AB, as were the effect-size indexes; but here, too, there was a clear decrease in gender-related grade differences. The examination grades thus appear to be losing their gender-typed characteristic. The trend reported by us in our previous study16 continued in 1994, 1995, and 1996, and resulted in new low values for most of the effect-size estimates.

In a broader context, the findings presented here and elsewhere are part of a bewildering picture of the stability and decline of gender-related differences in ability and achievement. The long-term trend observed here for performance on the AP Computer Science Examinations parallels findings for some ability tests. In the ability domain, decreases in gender-related differences have been observed repeatedly, though, again, not consistently. Recently, such findings have been summarized to the effect that, overall, gender-related differences in some areas of cognitive functioning have become smaller over recent decades, but have not yet been reduced to zero in every case.19 In the ability domain as well, the findings are quite inconsistent, not only across abilities but also within them. 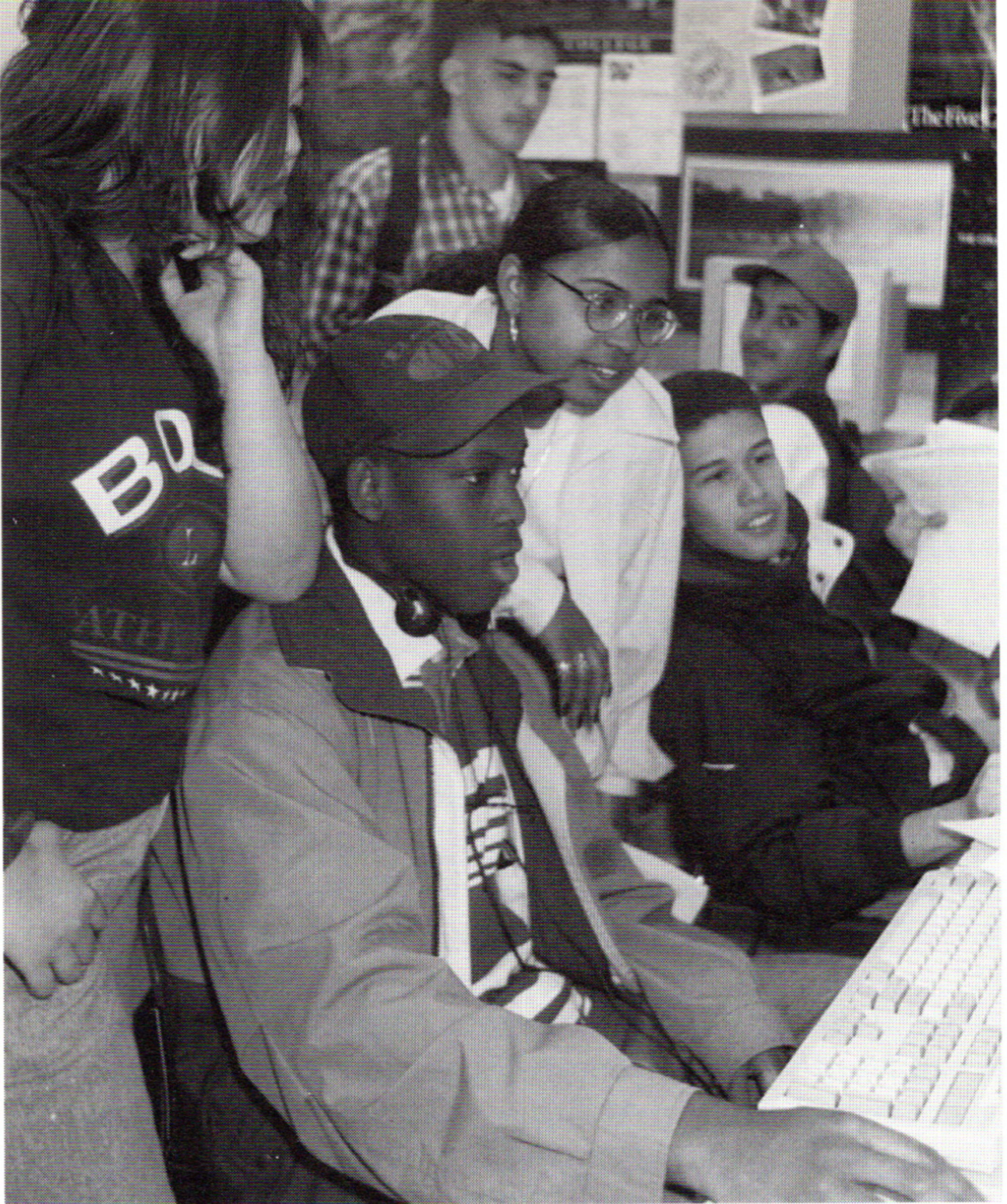 The authors suggest that strong efforts be made to encourage greater numbers of women to study computer science.

We may speculate about some possible causes for the decrease in gender-related differences in performance on the AP Computer Science Examinations. These include (1) changes in the populations taking the examinations,(2) changes in the content of the examinations themselves, (3) changes in attitudes toward computer science, and (4) changes in the way women are treated by classmates and teachers. Future research should be conducted to determine which of these or other variables contribute most strongly to the explanation of this trend.

As important as identifying the causes of the decrease in gender-related differences in performance, and probably more urgent from a sociopolitical point of view, is identifying the reasons so few women take AP Computer Science courses in high school, register for AP Computer Science Examinations, and subsequently choose computer science as their major in college. The consistently low percentage of women taking the examinations has serious implications—we are probably losing a great deal of talent in a very important subject. Clearly, strong efforts should be made so that computer science, which is critically important for many academic specialties and for social progress, will be more attractive to women. Society has succeeded rather well in increasing interest in precalculus mathematics and high school physics.23 Such success now needs to be duplicated in other subjects.

9. H. M. Breland, D. O. Danos, H. D. Kahn, M. Y. Kubota, and M. W. Sudlow, A Study of Gender and Performance on Advanced Placement History Examinations, College Board Report No. 91-4 (New York: College Entrance Examination Board, 1991 ); B. Bridgeman, "A Comparison of Quantitative Questions in Open-Ended and Multiple-Choice Formats," Journal of Educational Measurement 29: 253-271; B. Bridgeman and C. Lewis, "The Relationship of Essay and Multiple-Choice Scores with Grades in College Courses," Journal of Educational Measurement 31: 37-50; J. Mazzeo, A. P. Schmitt, and C. A. Bleistein, Do Women Perform Better, Relative to Men, on Constructed-Response Tests or Multiple Choice Tests? Evidence from the Advanced Placement Examinations, paper presented at the annual meeting of the National Council on Measurement in Education, Chicago, Ill., April 1991.