The Transformative Power of Open Conversations

Today, I consider Herman Beavers a friend and a mentor. But when we first met at Yale, in 1986, I was a freshman and he was the teaching assistant for a series of literature courses I took with the legendary professor Gloria Watkins, now better known as bell hooks. Those were the most impactful courses I took in college. Gloria departed from how professors typically approached literature courses and exhorted us to feel what we were reading and writing. It was magical pedagogy that led some of my classmates (like Min Jin Lee and Amor Towles) to successful writing careers. For the rest of us, the lessons informed our lives well beyond her classroom.

“It certainly changed my whole approach to teaching, being the TA in that class,” Beavers recalled recently. “She went out to lunch with just about every student in her class, and she insisted on writing for a wider audience beyond a scholarly audience. Her classes were models of inclusiveness, a word we throw around now, but which in her classroom meant that she wanted every student to feel empowered to speak, to be able to speak in their own voice.”

He now brings that open and democratic approach to his own courses at the University of Pennsylvania, where he’s a professor of English and Africana Studies. His interests range across American arts and letters, from jazz to poetry to Southern literature. He wants all of his students, regardless of race, to encounter parts of the country’s literary tradition they likely never considered—especially African American literature, which he considers not a subgenre but central to the national canon. “August Wilson belongs to you. James Baldwin belongs to you. Toni Morrison belongs to you,” he insists. “They have things to say to you as an American, as a human.”

Beavers spoke with The Elective about his experience teaching American literature, his deep insight into what students gain when they broaden their idea of who art and literature are meant to reach, and the power of having genuinely open class conversations. “If you just hang in there, on the far side of this, you’ll be a different person.”

How did you first encounter African American literature?

I got into it on my own. It was probably my junior year in high school. I had started writing poetry the year before, and the more I did it the more I realized I needed some models to learn what had been said, and for how to do it well. I started taking all the books by Black writers out of the library, starting with James Baldwin's Blues for Mister Charlie.

I went to high school in a Cleveland suburb, and it was basically a vocational school. Probably three-fourths of the students went into vocational fields, and maybe a quarter of us went to college. There were no classes in the English department that focused on African American writers. Native Son was on the list of books you could read, but it was not taught in any class I took in the English department. So I just started reading on my own.

What I discovered was that there was a great deal of variety. I loved reading anthologies, and I probably read every book in my local library that had to do with African American writers. It wasn’t much, maybe three or four shelves. But I read everything I could get my hands on, then I traveled to other libraries to find more books.

Do the students you see in your college classes now come in with a different experience? Are they encountering Black authors in a more focused way in their high school classrooms?

My students have likely read the Black authors who are canonized: Zora Neale Hurston and Toni Morrison, maybe Alice Walker. When I ask them how many have read Beloved or The Bluest Eye, a lot of hands go up. But they’ve never taken a class in African American literature, so they have really limited exposure.

I think a lot of majority students don’t see African American literature as having anything to do with them. They think of Black writing—because they were taught this way—as somehow parochial, as only about the Black experience. It couldn’t be universal in the same way as White or European writing, which is the only way you can ruminate on the notion of the human. African American authors are still taught as an offshoot of American literature, where it’s read as a way to understand “the Black experience” as something separate and apart from the American mainstream. 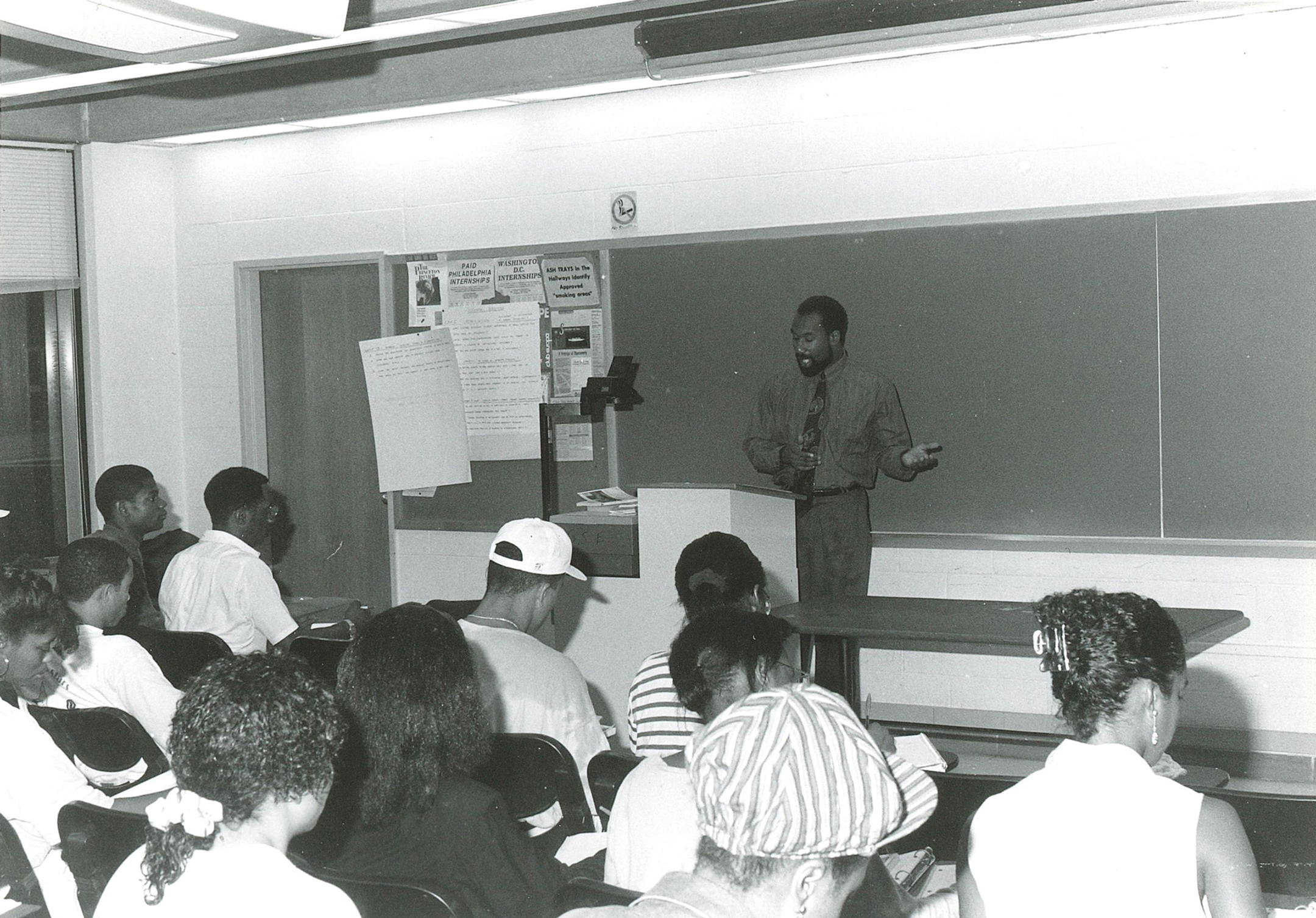 Herman Beavers lectures in an African American autobiography course during the The Center for Africana Studies Summer Institute for Pre-Freshmen in 1992.

I’ve seen the beginnings of that change, but it’s still all about the canon and the politics that guide how we determine the canon. When my colleagues act like Beloved is the urtext of African American writing, it does a huge disservice to African American literature. It’s so much bigger! And in thinking so narrowly, they miss the opportunity to consider how Black writing is by no means about achieving a definitive idea of what it means to be Black. It’s much more exciting to think of it as an ongoing, unsettled conversation.

I still often see an instrumentalist approach to African American writing, like its purpose is to enlighten Whites about what it means to talk about race. And, look, I’ve been a creative writer longer than I’ve been a scholarly writer. I’ve never written anything that was meant to enlighten White people about race. It just doesn’t interest me. I’m echoing what Ta-Nehisi Coates and Toni Morrison have said—it doesn’t interest them. Morrison has said she’s writing the books she wanted to read but couldn’t find.

When people decide that this author or this list of five or 10 books is what they need to read to understand Black people, it’s just a huge disservice. Think about how voluminous the Anglo-American canon is. If I’ve read Pamela and Tristram Shandy or Heart of Darkness and Moby-Dick, do I fully understand White people? Is that why the authors of those books were writing? The whole idea of capital-L Literature is to delineate what makes one individual’s experience in the world worthy of attention such that we can say, “This is this person’s particular experience.” African American writers don’t always get the benefit of that. African American writing is still approached as if it’s sociology.

It’s sad because we’ve wasted a tremendous amount of time in the United States talking past one another. We could have completely sidestepped this nonsense about critical race theory if we had just approached Black people for the complex, multi-layered, complicated folks that we are. But to accomplish that, we’d have to embrace our history for the messy, sometimes tragic, sometimes ascendant narrative that features not only our heroic achievements but also acts of cruel, inhumane treatment that lasted for a long time. That’s not the whole story, but it’s an important part of the story that shouldn’t be left out simply to protect White people’s egos. Instead, students are wondering if my class has anything to say to them about the American experience because they see it as an exercise in race relations, which really doesn’t interest me. I love what Toni Morrison said when she pointed out that European and English writers were writing about White people all the time, and says that it’s pure laziness to ask a Black writer when she’s going to “stop writing about race.”

What role can academics like yourself play in introducing wider audiences to the larger world of literature, to authors and poets and musicians who have been overlooked or relegated to a certain subsection of the canon?

I’ve spent a lot of time in my career having book discussions in libraries, going to high schools, making connections with teachers so I can engage with their students. But there are not a lot of people in academia who are interested in doing that, and the academy does not reward that kind of labor. I think that there are a lot of African American scholars who don’t think people outside the academy are their audience, so they don’t foment discussions with them.

We have to leave the campus and go out amongst folks and have conversations with them. If we don’t go out and talk to people, then we’re missing out on what are really profound observations. I talk to all kinds of people. It has taught me a tremendous amount. I’m interested in what they have to say about Frederick Douglass or Toni Morrison or Samuel Delany. We have to think about engaging people, and listening has to be a huge portion of what we do. We can’t just go talk at them, we need to listen. I’m always struck by how astute people are, including people who only have high school diplomas, as readers. There are Black people who don’t have college degrees who read books! What a concept! It’s ridiculous for us to think the only way we can share what we know is for people to come to college.

You’re a huge fan of jazz, and you’ve studied it closely. Why do you love it so much? How does it relate to your life as a literary scholar?

When I was at Yale, I started to develop friendships with jazz musicians. One of the things I learned was that you’ll be pilloried as a jazz musician if you play the same solo tonight that you played two nights ago. Someone is going to call you out on that! Jazz is like building a really ornate house: You work one night and you end up with this really ornate structure, and the next day you tear it down and build another ornate structure that’s totally different, or at least a variation on a theme.

The African diaspora's culture of improvisation and invention is at the root of that and so much Black art in America. I am fascinated by this idea that these 80-some groups from West Africa who didn’t speak the same language or have the same belief systems created what we know as African American culture. They had to find ways to talk to one another. If you take a musician from Kansas, Louisiana, Atlanta, and somebody says, “Let’s play some blues!” that’s a language they all understand. You put them on the same stage and they find a way to talk to one another.

There’s this mélange that Black people create that is incomplete. It has to remain incomplete because there is no finish point, no point at which we say, “We’re done, we’re not adding anything else.” African cultures can’t have a clear beginning and an end. These are cultures that don’t see death as a finality but as a transition. And I think a lot of us still retain that idea.

The reinvention, the open-endedness of African American culture is really powerful to me. That’s the practice of freedom! Feeling like you don’t need to have an endpoint. You can have faith that people will continue to invent stuff that you can add in and make part of whatever you’re doing. It’s a challenge, but Black people meet that challenge every day. And we could tailor that thinking to impact the classroom in profound ways. There is no endpoint to education. We’re always reinventing.

The Road Ahead for Latino Education

Recommitting to the Endeavor of Hope