Like a lot of kids, I wanted to be president. A loud elementary school classmate told me that wasn’t possible because I was a girl—I proudly told him I was going to be the first female president. As I got a little older, my interests shifted internationally. That's not because my classmate was right; instead, I set my sights on an equally exciting goal: secretary of state.

Madeleine Albright, who died March 23, of cancer, at 84, is a big reason why.

When I was in high school, I attended a student-athlete event with kids across my school district. For the icebreaker question, we shared which celebrity we wanted to take to lunch. My answer was the secretary of state, which left the majority of the participants confused. (LeBron James and Tom Brady were more their speed.)

I didn't know much about political parties, what it meant to be Republican or Democrat, or even the real significance of current events. But I did know that, at that time, two women had held the office of America’s top diplomat: Albright and Condoleeza Rice. According to my math, that was two more than had been president. It was exciting—and empowering—seeing powerful women on the world stage.

My mother was one such woman. She worked for the British Foreign Office and was stationed in Moscow for several years in the late 1980s. She told me stories about being followed by the KGB and finding her apartment ransacked, both persistent and personal reminders of the Cold War. Before I ever knew about Madeleine Albright or the office of secretary of state, I saw how women could be on the frontlines of foreign policy. 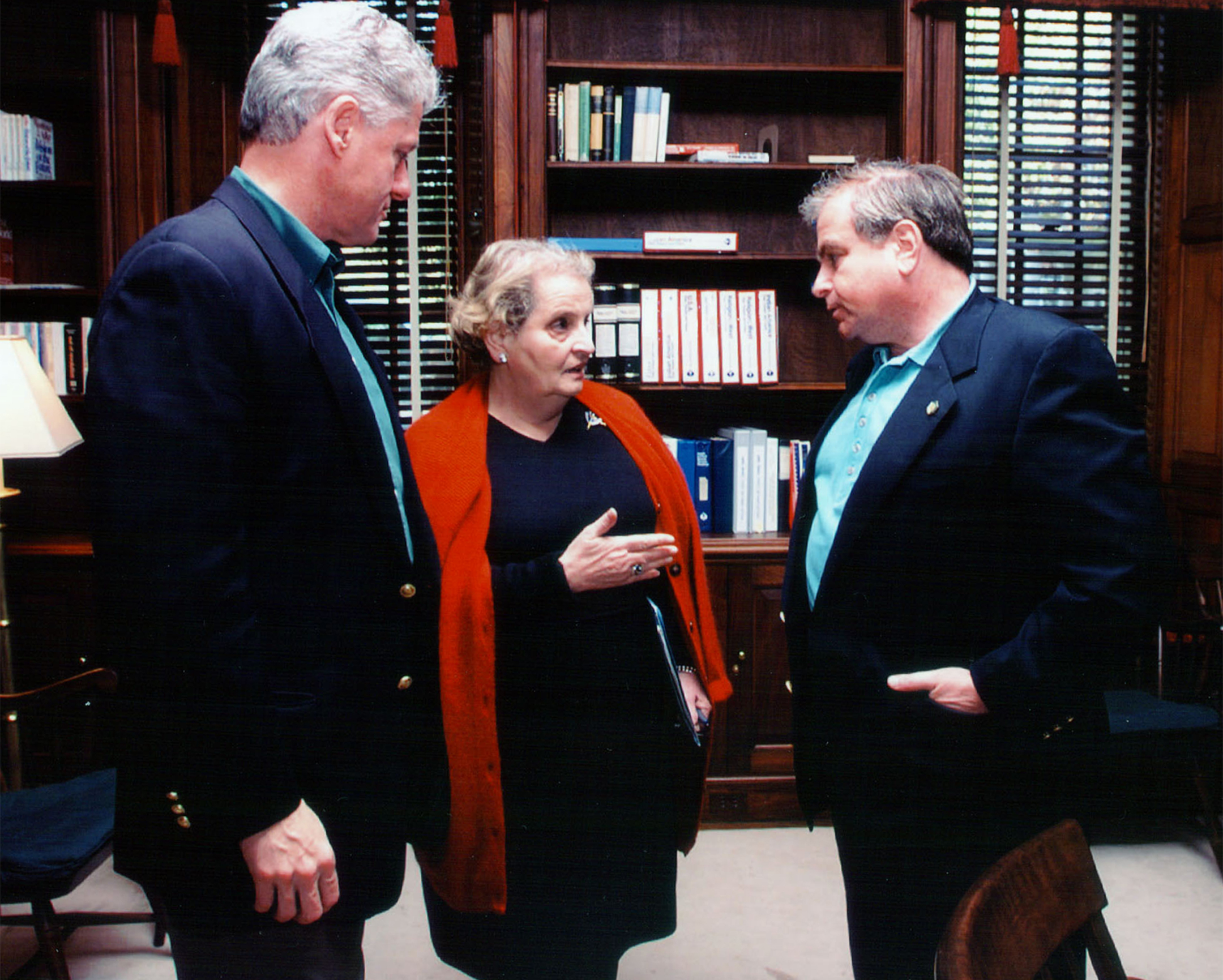 As I got older, my mother’s experiences inspired me to take a deeper look at world affairs—and the women who shaped them. I studied international relations as an undergrad, and Albright’s impact was clear. Not only was she America’s first female secretary of state, she also led the nation—and world—as it transitioned into a post-Cold War era. Her work in this space was especially significant to me, so clearly tied to my mom's experience in the Soviet Union. And I realized the connection to a larger story of women taking on leadership responsibilities on a global scale.

Albright’s four years leading the State Department were monumental, and the capstone of a full, accomplished life.

Born in Prague, Czechoslovakia, on the eve of World War II, Hitler's invasion of the country in 1938 sent her family into exile. They returned at the end of the war, only to find themselves exiled a second time, driven out by the Soviet Union's totalitarianism. After spending time in London, 11-year-old Albright came to the United States in 1948. Her experiences in Europe drove her to study international and public affairs and political science, at Wellesley, Johns Hopkins, then Columbia University, where she earned her PhD. She also dedicated her public life as a defender against totalitarianism—as a member of the National Security Council in the Carter administration, as Bill Clinton's ambassador to the United Nations, then as secretary of state, where she advocated for NATO expansion into Eastern Europe.

In the 1990s, Albright was the only woman on President Clinton’s Security Council. She later spoke at length about how hard she worked to get to where she was and earn the respect of men around her—colleagues who questioned if she had earned the right to be secretary of state and if she was too emotional when she argued her points. Nevertheless, she demonstrated women could lead on the global stage at the highest levels. 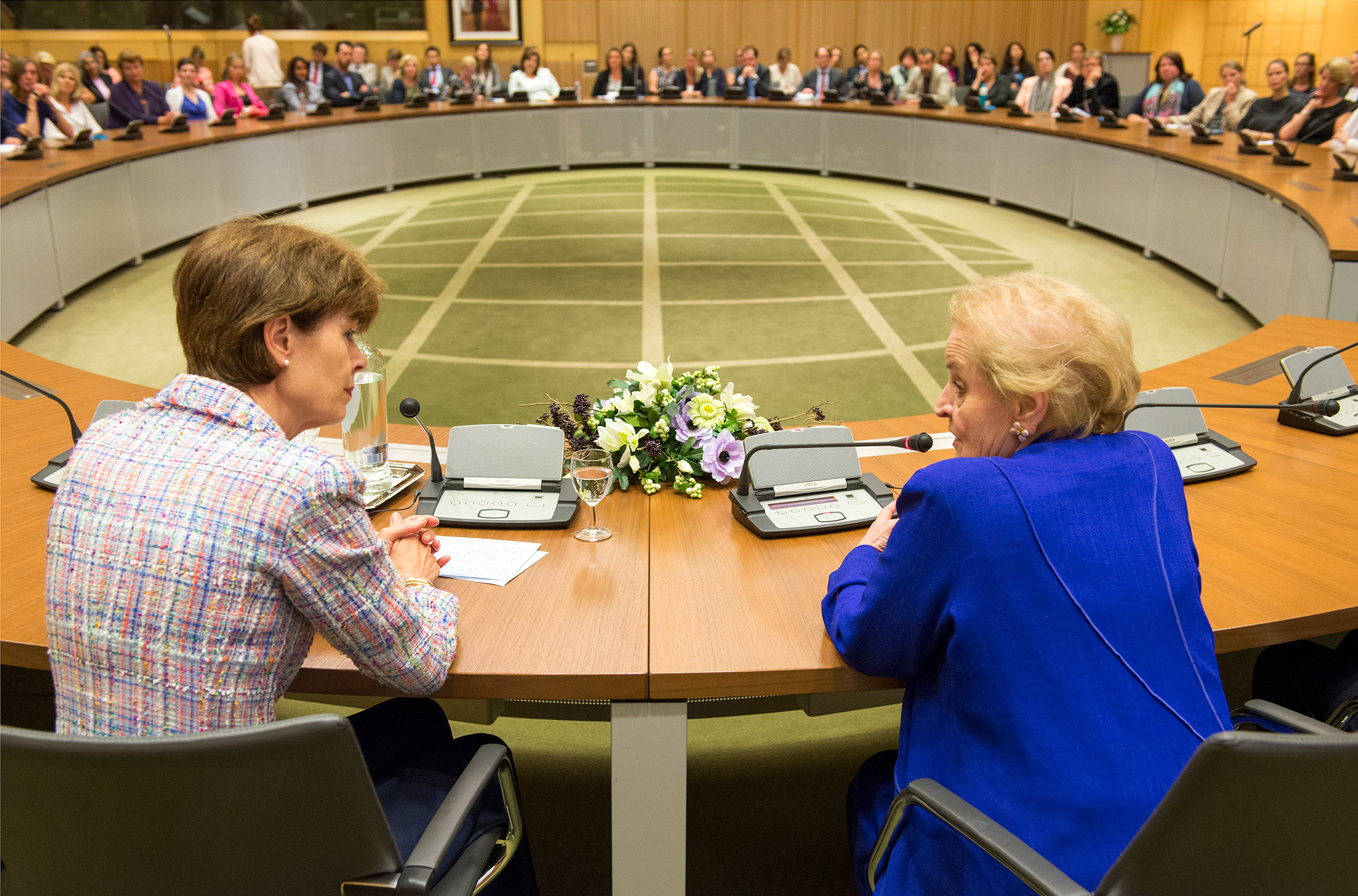 Madeleine Albright speaking with Netherlands State Department Secretary-General Renée Jones-Bos at a Female Exchanges of Experiences in the Netherlands, June 16, 2015.

That was no great revelation to Albright, who worked hard her entire professional life to expand the number of women in public policy.  At Georgetown University, where she taught after leaving the National Security Council, she had students roleplay foreign policy situations and placed women in roles traditionally dominated by men. This ensured her female students gained important experience while challenging traditional gender assumptions about who was qualified for what roles.

She continued pushing for women in public policy (and warning against global totalitarianism) for the rest of her life, including at the highest level. She was a staunch advocate for women helping women and campaigned with Hillary Clinton in 2016. “People are talking about revolution,” Albright said at the time. “What kind of a revolution would it be to have the first woman president of the United States.” (It will have to wait a little longer.)

That same year, I interned with the State Department and worked for and with many amazing women. It was a tangible legacy of Albright’s time in government, as was my internship. But there’s still a long way to go. Women still comprise only 28–41% of foreign service roles, depending on the position—only 28% of overseas ambassadors are female—and of Albright's 11 successors at the State Department, only two have been women.

Even so, Albright’s leadership and civic engagement impacted me and countless other young women, drawn to policy. Her legacy and accomplishments will undoubtedly continue to inspire. 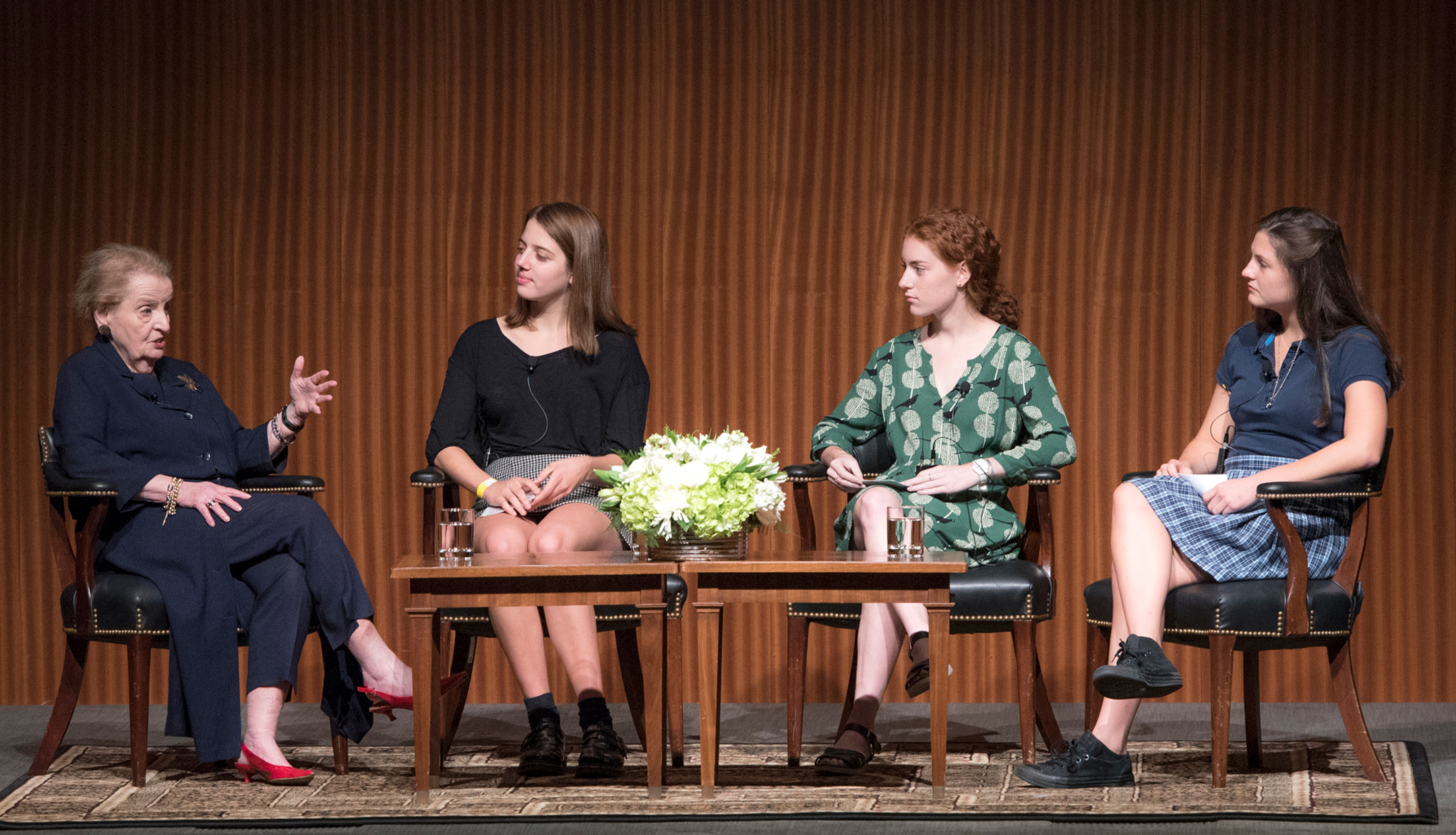 Just a month before she died, Albright published, in The New York Times, her final op-ed. She reflected on her working relationship with Russian president Vladimir Putin, criticized his inability to admit weakness and his desire to make Russia great, and wrote a strong message of support for Ukraine. She also held true to her own personal values: she found her voice, knew how to use it, and refused to be silent.

My career led me outside of the foreign policy sphere, but in December 2018 I had the privilege of hearing Albright speak. She was funny and relatable as she passionately described the importance of speaking up. I realized her impact transcends the confines of international affairs. She's also an inspiration to women across the public sector fighting long-standing and outdated gender stereotypes, who are passionate about making a difference in civic life, and who use their voices even if they are uncertain of the result.

Madeline Albright was a singular, impactful diplomat and public figure. She was also a trailblazer. It’s a word that’s used so often it can feel meaningless—it fits Albright perfectly.

A Pitch for Public Service