Nickelmania, Vocational Devotionals, and Reel Buffets: Five Things That Made Us Smarter This Week

From loose change to big data, we learned a lot over the last seven days 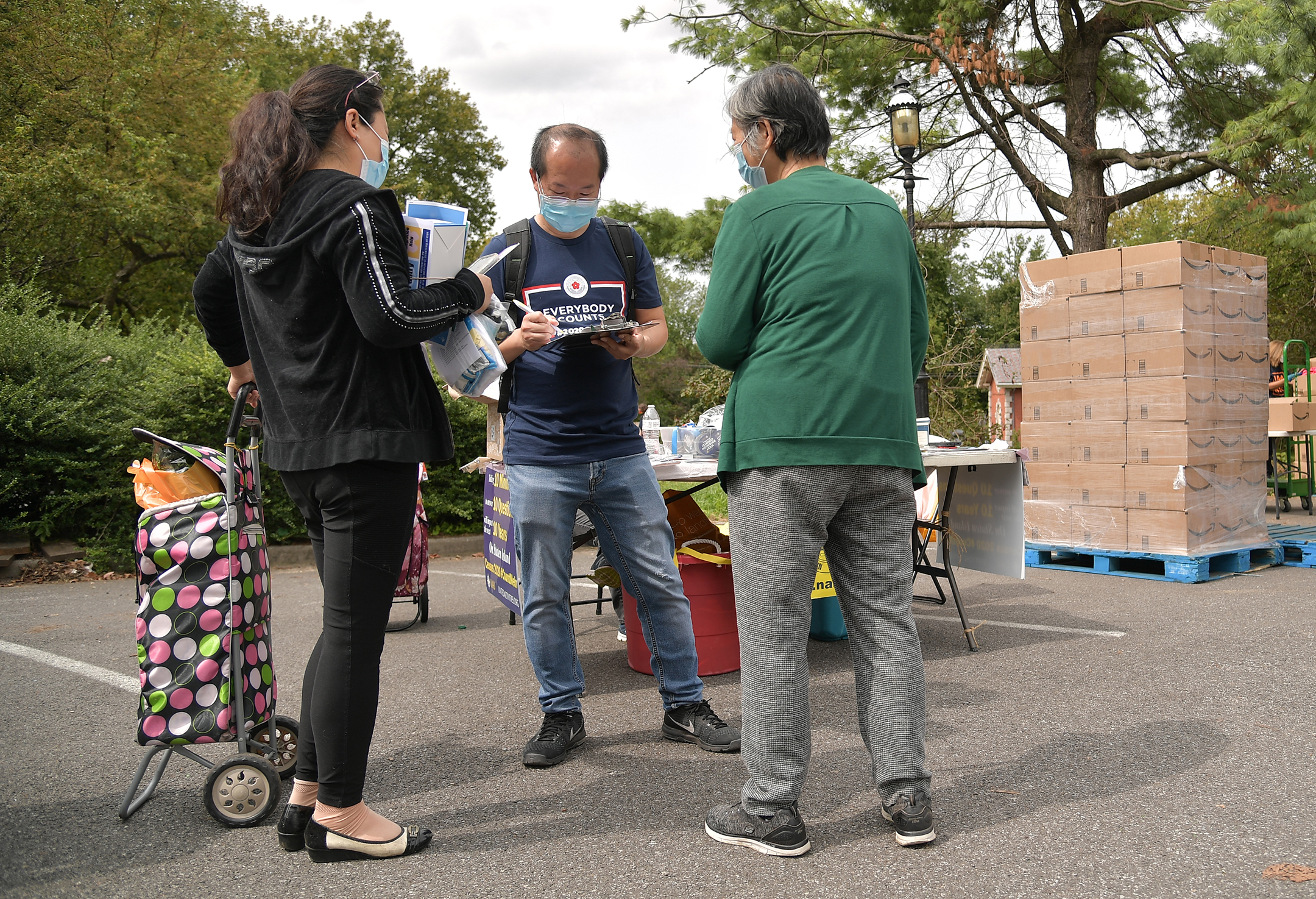 The United States is a very big, very diverse country. Getting an accurate sense of your fellow citizens is hard when there are 330 million of them. This fascinating poll firm YouGov shows just how badly Americans misperceive some key facts about the country they share, underestimating how many people have graduated from high school or read a book recently and badly overestimating how many live in New York City or follow a vegetarian diet. Across a range of demographic categories, we simply have no idea how large or small the share of the population actually is.

I’m not surprised people feel like there are a lot more Texans than there actually are—we’re loud and we take up a lot of space—but what’s behind the systematic overestimating of minority populations and underestimating of majority characteristics? “One recent meta-study suggests that when people are asked to make an estimation they are uncertain about, such as the size of a population, they tend to rescale their perceptions in a rational manner,” write the researchers at YouGov. “When a person’s lived experience suggests an extreme value—such as a small proportion of people who are Jewish or a large proportion of people who are Christian—they often assume, reasonably, that their experiences are biased. In response, they adjust their prior estimate of a group’s size accordingly by shifting it closer to what they perceive to be the mean group size (that is, 50%).” In attempting to correct for our own potential biases, we end up producing an even more distorted sense of the world. Sometimes, there’s just no substitute for real data. —Stefanie Sanford 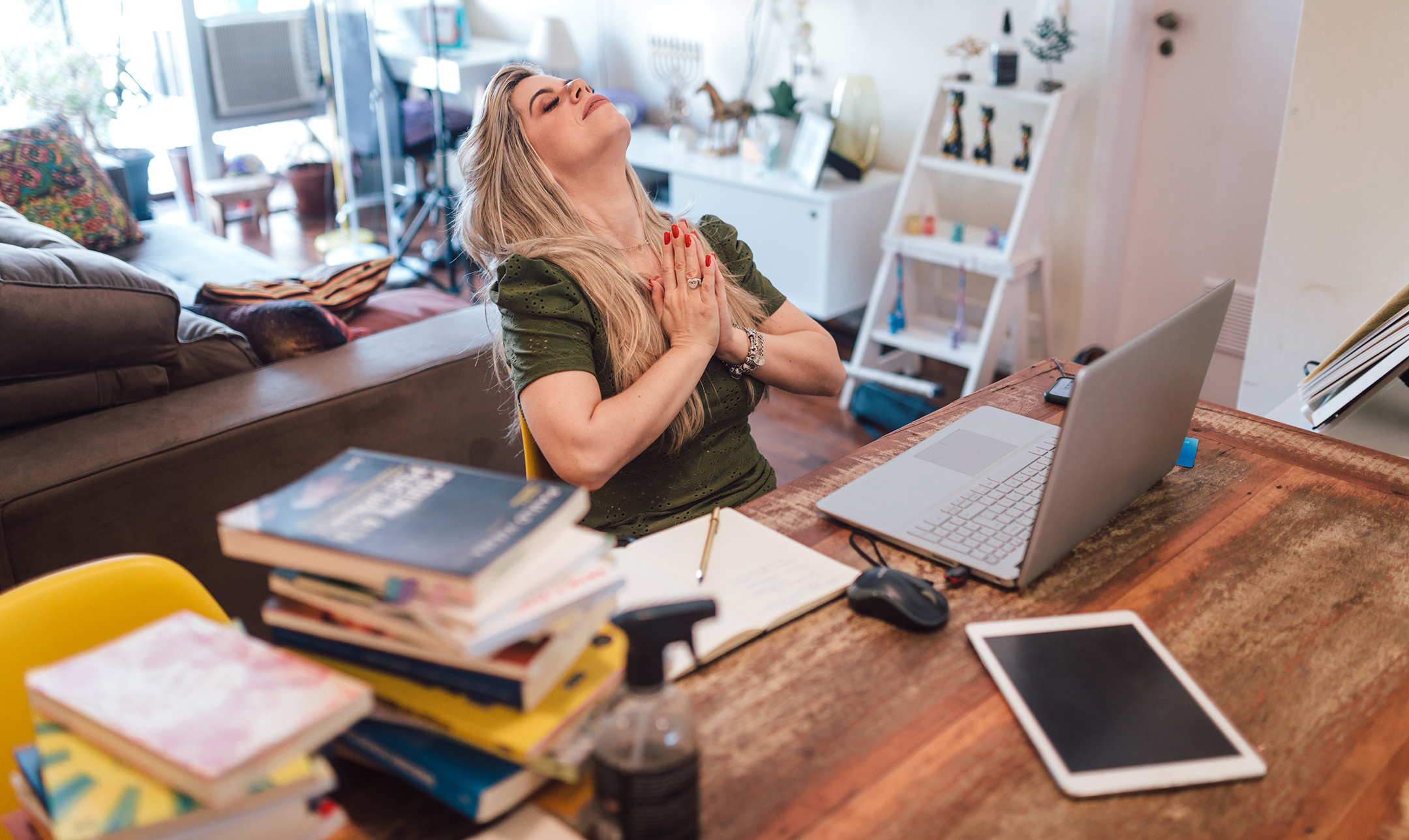 Taking a break from work? Participating in a Zoom religious ceremony? Praying to her inbox? Sure.

The Book of Jobs

I don't know anyone—or any organization—untouched by the Great Resignation. When I first heard the term, it wasn't surprising to me. After two years of pandemic-induced stress, why not look for a higher-paying job? Or a job with less hours? Or even take time off to discover self-fulfillment? It seemed like natural responses to our chaotic world, but I was still taken aback by the number of people who heralded the moment as the end of ambition or work ethic. Carolyn Chen, author of Work, Pray, Code, also disagrees with these takes and argues the Great Resignation won't change our country's collective worship of work. "At a time when religious-affiliation rates are at the lowest they’ve been in the past 73 years,” Chen writes, “we worship work—meaning we sacrifice for and surrender to it—because it gives us identity, belonging, and meaning, not to mention that it puts food on our tables."

Chen, an associate professor of ethnic studies at UC Berkeley and a co-director of the Berkeley Center for the Study of Religion, interviewed more than 100 tech-industry professionals who equate their work directly and indirectly to religion. Some go to work to be nourished or because it's their calling; one interviewee explicitly stated that as he left his childhood religion behind his company became his new faith community. I was immediately skeptical of Chen's argument—a subset of 100 tech workers does not seem to accurately represent America. She addresses this point head on. According to a recent McKinsey survey, 70% of American workers defined their sense of worth by their job. And Chen believes that this is the tip of the iceberg. The sense of connection Silicon Valley seeks to foster in its employees will become a template for companies across the country who seek to retain employees. Again, skeptical. I strive to separate my sense of self from my work—my friends, hobbies, and faith are where I find my purpose. And, again, Chen anticipated the retort. She believes that individual actions, from hobbies to sabbaticals to securing a more meaningful job, all leave the theocracy of work intact. In order to change the system, she argues, we must devote our time, energy, and sacrifices to communities beyond the 9-to-5. Her challenge to the reader struck me: In this period of transition, we all must choose what institutions to make sacred in our own lives. It’s something we all should reflect on, regardless of our house of worship. —Hannah Van Drie

I turned 21 the day the U.S. Mint, in 2002, released the Ohio commemorative state quarters. (I didn’t notice the coincidence at the time—I was, ahem, celebrating). Turns out, the engraving on that coin, depicting the Wright Flyer III and a suited-up astronaut beside the words “Birthplace of Aviation Pioneers,” was competing with North Carolina’s quarter from a year earlier. That coin feature recreated John T. Daniels’ famous photograph from December 17, 1903, of Wilbur Wright watching brother Orville ride the Wright Flyer I at a sustained elevation over the Outer Banks beach of what is today Kill Devil Hills, the words “First Flight” written above them. But North Carolina interests originally pushed for the slightly more grandiose (but rejected) phrase “First in Flight,” while Ohio vied for the (also rejected) phrase “Birthplace of Aviation.” This stems from Buckeyes and Tar Heels long arguing over ownership of the Wright flying legacy: Orville was born and raised with (Indiana-born) Wilbur in Dayton, Ohio, where they built their craft, but the brothers conducted their first short flights in North Carolina.

That’s a long way to say, if the Mint ever takes another swing at state quarters, the argument might be moot—because Massachusetts may have ushered in a new era of airplanes. It actually happened in 2018, when a team led by Massachusetts Institute of Technology professor of aeronautics and astronautics Steven Barrett flew a five-pound glider with a 16.4-foot wingspan across the 60-meter length of the duPont Athletic Center. What made it historic is what made it go, not a noisy propellor or engine but rather silent “ionic wind” generated by 40,000 volts worth of on-board lithium-polymer batteries. Barrett told the MIT News Office that it was “the first-ever sustained flight of a plane with no moving parts in the propulsion system,” and that “this has potentially opened new and unexplored possibilities for aircraft which are quieter, mechanically simpler, and do not emit combustion emissions.” Barrett published the flight’s results in the 2018 Nature article “Flight of an aeroplane with solid-state propulsion,” (The plane’s electroaerodynamic propulsion system actually dates back to 1920s experiments with electrohydrodynamics conducted by Thomas Townsend Brown, an Ohioan—take that, North Carolina!) NASA noticed Barrett’s team’s accomplishment and recently awarded it  $175,000 in funding for nine months of development within Phase I of 2022’s NASA Innovative Advanced Concepts Program (under the title “Silent, Solid-State Propulsion for Advanced Air Mobility Vehicles”). As CNET’s Eric Mack notes, rather than current Mars drones with propellers that eventually wear out and are impossible to repair, a next-gen wave of ionic wind-driven drones could more reliably explore the red planet and beyond. Hopefully that will be enough for the Barrett Flyer I to get its own quarter—or, at least, cryptocurrency. —Christian Niedan 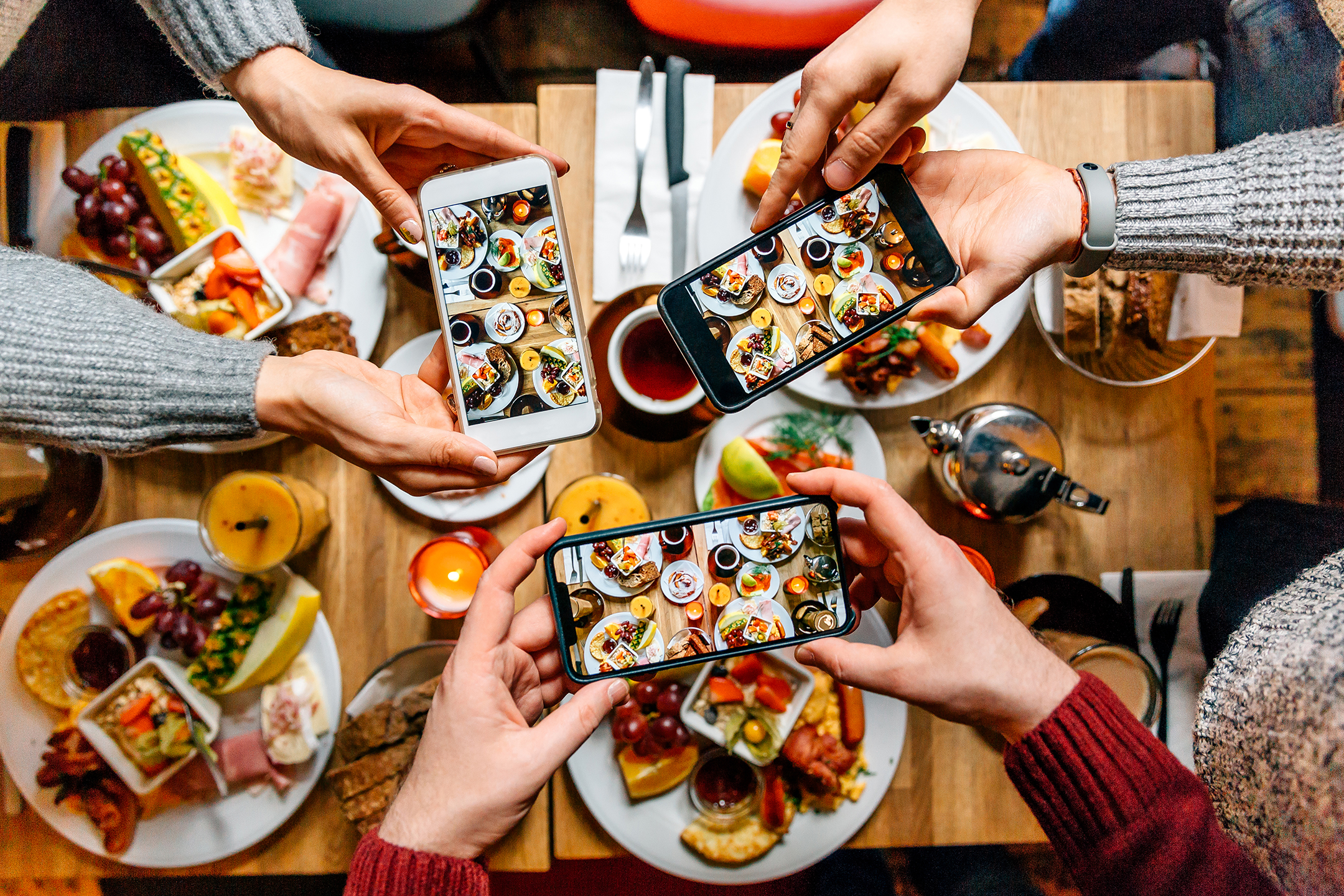 If a meal is consumed by a group of people and no one posted pics to the 'gram, did the meal really happen?

We’re used to thinking about the outsized effect of social media on our politics, personal lives, and collective mental health. But this piece from the New York Times Food section is a great illustration of how the minor business decisions of tech titans can ripple out to affect smaller companies and entrepreneurs across the world. “Since Instagram arrived in 2010, sharing food photos, writing a thoughtful caption and adding relevant hashtags have been the foundation of many small food businesses’ social media strategy, and a low-cost form of advertising,” writes Becky Hughs. “Then, at the end of 2021, Instagram’s parent company, Meta, changed the platform’s algorithm to prioritize videos, called Reels. Accounts that don’t regularly post the short-form videos appear below those that have embraced the format in users’ Instagram feeds, resulting in a notable drop in engagement on posts—and, in turn, sales—for many small businesses.”

It makes sense Instagram is trying to get deeper into video, given the rise of TikTok as the most popular platform among younger users. But for hundreds of restaurants, bakeries, food trucks, and caterers who have built huge followings and successful businesses on the tried-and-true method of posting gorgeous food photos, that shift in tech trends has been hard to swallow. Can you make a snappy video of avocado toast or roasted cauliflower? Do you even have the time to try? “It’s been terrifying because I was really good at taking beautiful photos and writing long emotional captions,” said Javeri Kadri, the founder of a company that sells spices. “Suddenly, for the past six months I’ve been mourning the loss of value of that skill.” The world is moving fast, apps are breaking things, and yesterday’s expert influencers are scrambling to keep up. — Eric Johnson 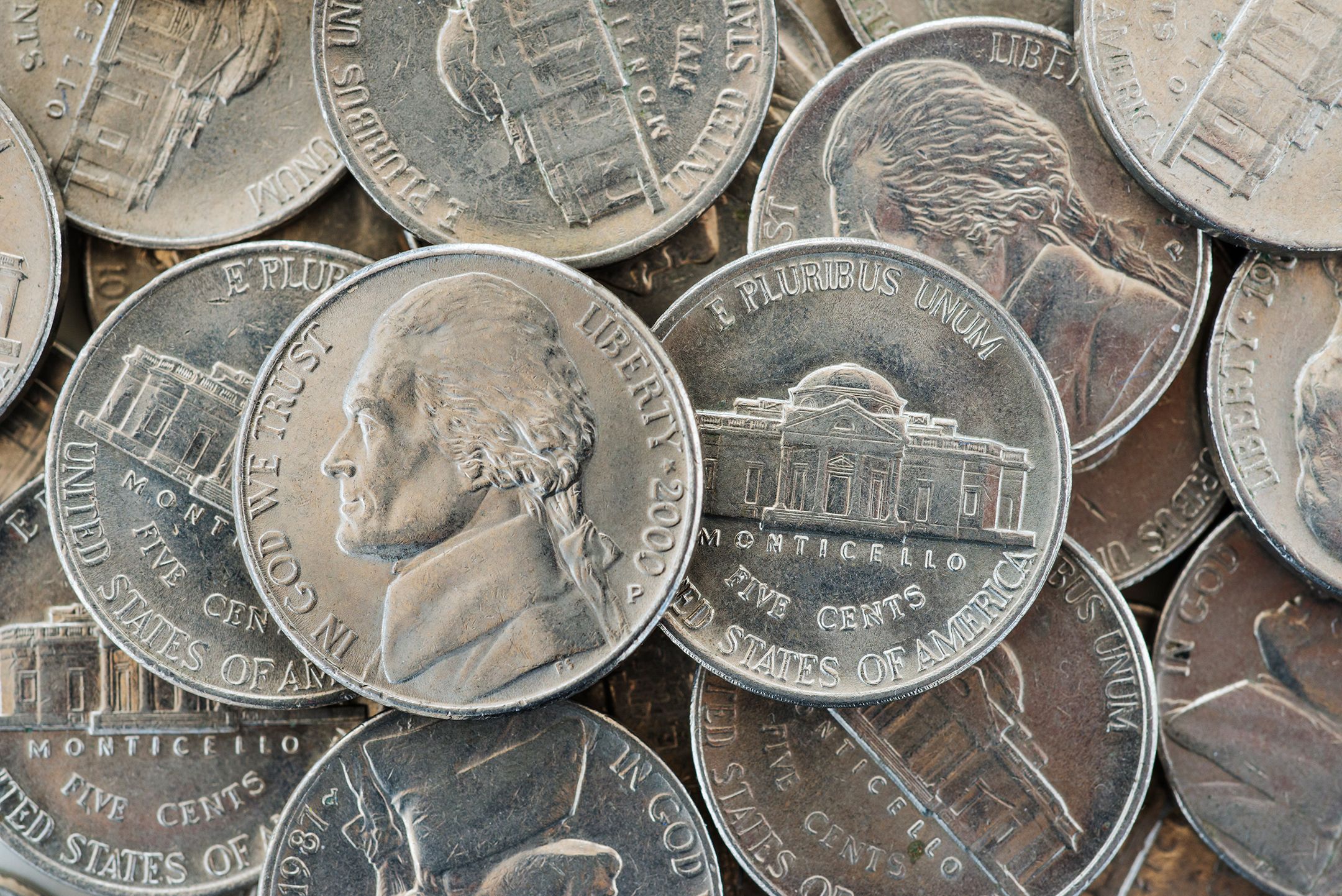 Back away from the screen, you nickel hoarders!

A Nickel Saved is a Dime Earned

We hoard all sorts of things in a crisis: canned goods, toilet paper, survivalist gear and go bags. The war in Ukraine is no different—sending Americans to stockpile *checks notes* nickels? “Russia supplies more than 20 percent of the world’s high-quality nickel,” writes Saahil Desai in The Atlantic. “But with Ukraine under siege, companies in the West have been wary of buying Russian nickel. This has increased demand for nickel from everywhere else.” This demand drove up prices on the London Metal exchange yadda yadda yadda some intrepid Yanks started socking away nickels. The coin is 25% nickel (the rest is copper), and with metal prices surging the “melt value” of a tried-and-true red-white-and-blue Jefferson five-cent piece is eight cents. (“Last week, during the height of nickelmania, it ratcheted all the way up to 16 cents.” Nickelmania!) Of course, defacing currency—and, yes, that includes melting it down—is illegal. “But that hasn’t stopped opportunistic investors from zigzagging between banks and credit unions to gather nickels, with the hopes of one day selling them off for more than five cents.” And it’s not just your everyday cockeyed numismatic gobbling these up. “According to Boomerang, by Michael Lewis, the hedge-fund manager Kyle Bass owns $1 million in nickels that he stores in a vault in Dallas,” Desai writes. Bass later told Desai in an email that his “nickel stash…weighs 220,000 pounds, or by my calculations more than six empty 18-wheelers.” Um. This is all so wild—the kind of nutty that feels like a throwback to an earlier, more innocent time of bonkers get-rich-quick schemes. Aiding the vibe, Desai quotes some folks who tried hitting the nickel lode at their local bank branches, with varying degrees of success. “I walked up and just told the two ladies at the front, ‘Can I have $100 in nickels?’” Clark Boyles told Desai. “They laughed me out of the bank.” I mean… What was I saying? Right. This story is the kind of weird and relatively innocent I wish we got more often. And with a certain, let’s say, segment of the population off the blockchain for cryptocurrencies, a run on physical coins feels quaint. Cute even, if it weren’t so ludicrous. But also, frankly, unpatriotic. Hasn’t anyone told these speculators about the nationwide coin shortage? —Dante A. Ciampaglia

We Do Talk About Bruno, Watching the Watches, and Dolly’s Virtues