Pandemic Idioms, Filter Bubbles, and Walk-and-Talks: Five Things That Made Us Smarter This Week

From building our vocabulary to going back to the movies, we learned a lot over the last seven days 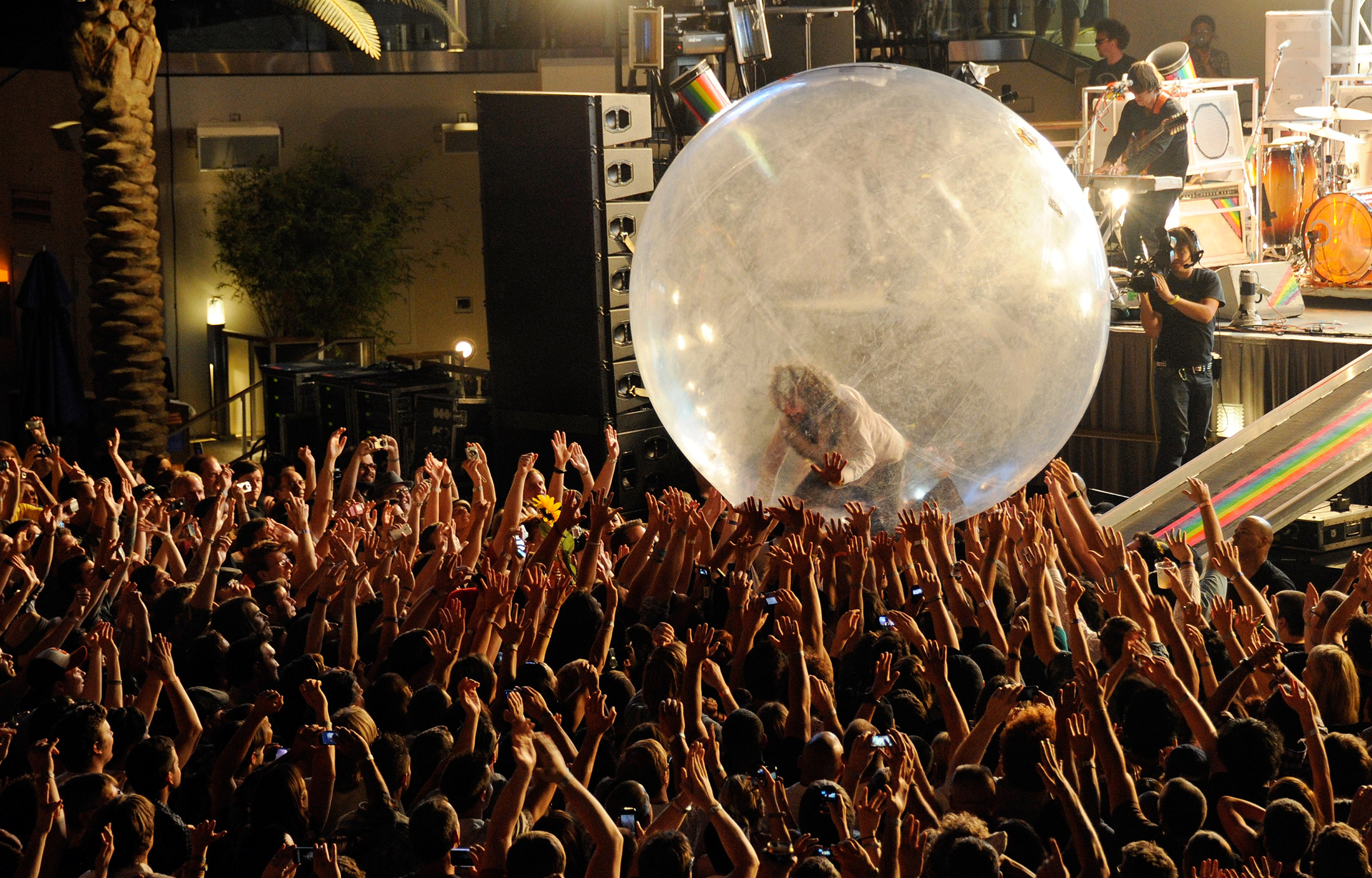 When The Markup launched last February, it immediately became a go-to news source. (I was also really happy to see it up and running after the very bitter, very public controversy that almost killed it a year earlier.) Run by founder and editor-in-chief Julia Angwin, a former investigative reporter at the Wall Street Journal, The Markup is “a nonprofit newsroom that investigates how powerful institutions are using technology to change our society” using data science and expert reporting with a premium on showing their work. They’ve also built some cool tools—Blacklight, Simple Search, Split Screen—to help readers peel back and understand the digital experience that overlays our lives. Its tagline is “Big Tech Is Watching You. We’re Watching Big Tech.” How can you not love that? Angwin also has an excellent weekly newsletter where she digs into a topic, either through her own reporting or interviews with experts who can break down an issue.

Last weekend, she spoke with Eli Praiser, who coined the term “filter bubble” a decade ago, about what led him to the term and how his thinking on the concept has changed after 10 years of social media siloing us in echo chambers. It’s a fascinating conversation touching on how we consume information, what’s actually being accomplished when we see how the other half lives online, and digital public parks. (I love this idea.) But maybe the most salient point Praiser raises is reclaiming the value of relationships in our content-laden culture. "The place where I’ve probably changed my mind the most is that the filter bubble was a content-centric way of thinking about what people need to know in order to understand the world," he says. "The more I thought about it, the more I’ve wondered if really it’s about relationships, and the content is kind of a layer that sits on top of the structure of your relationships." He then adds, "It’s the relationships around that content that make it compelling." Actually talking with people and forming unique and complex opinions rather than wallowing in the Mark Zuckerberg hate-and-outrage gyre? What a concept! —Dante A. Ciampaglia 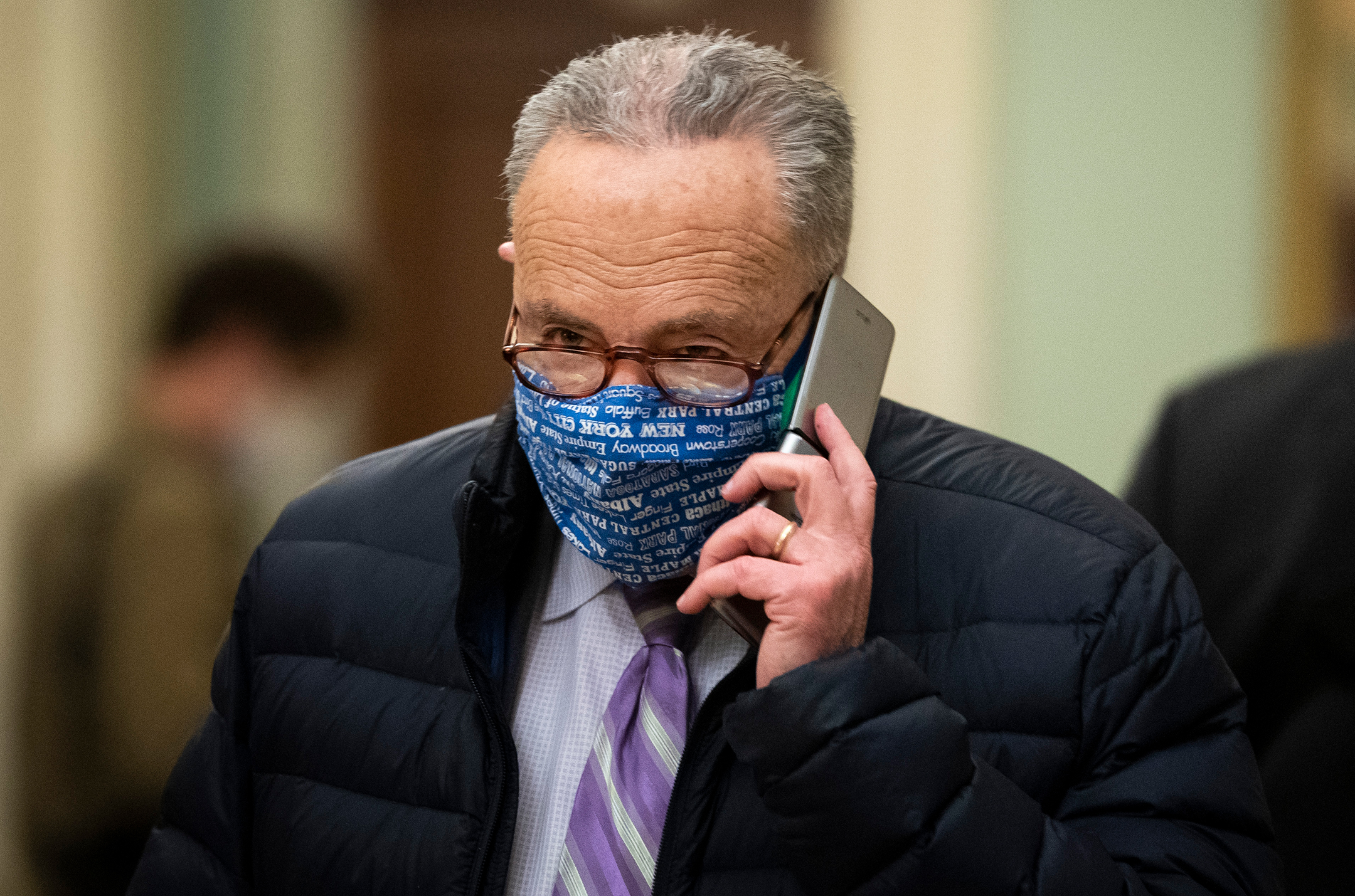 Chuck Schumer, talking on his flip phone (!) while walking through the halls of the Capitol Building on February 9, 2021. Can he even send viral TikToks to his Instagram tweets with that thing?!

Putting the “Senior” in Senior Members of Congress

American leaders are much older than American voters, and that’s leading to skewed decisions about the country’s future. So says Eve Peyser in this excellent piece for New York magazine on the trouble with being governed by an AARP caucus. “Not having enough millennials and Gen-Zers, or even Gen-Xers, at the table isn’t only worrisome because it’s unfair or because of senility concerns,” she argues. “It threatens the very future of the nation. Because a gerontocratic government is a government that doesn’t represent all its citizens; it’s a government that doesn’t feel very democratic at all.” It’s also a government that struggles with some very modern issues like tech regulation and climate change policy. Senate Majority Leader Chuck Schumer carries a flip phone. Nobody in Congress seems to know how social media works (or what it is). [Tell that to AOC. - Ed.] And the U.S. spends fantastically more on entitlements that benefit older people than on, say, education or long-range infrastructure that will benefit younger generations. Put succinctly: Retirees get social security checks; younger Americans write checks to pay off federal student loans.

But what about the experience argument? “There surely has got to be a way to bring more people under the age of 50 into elected office without sacrificing the very real wisdom that (many of) our elders offer,” Peyser writes, calling for reforms to voting laws and an end to partisan gerrymandering. Making voting easier will increase the number of young people who participate, while ending gerrymandering will force lawmakers to be responsive to the much younger voters they’re supposed to serve. A perpetual challenge in American public life is persuading young people hungry for change that the existing institutions of society can still work—and can still deliver the kind of reform and responsiveness that democracy promises. That challenge becomes greater with each new generation of voters, especially when elected officials remain in office into their 80s. Seeing some fresher faces in office would be a great start. —Eric Johnson 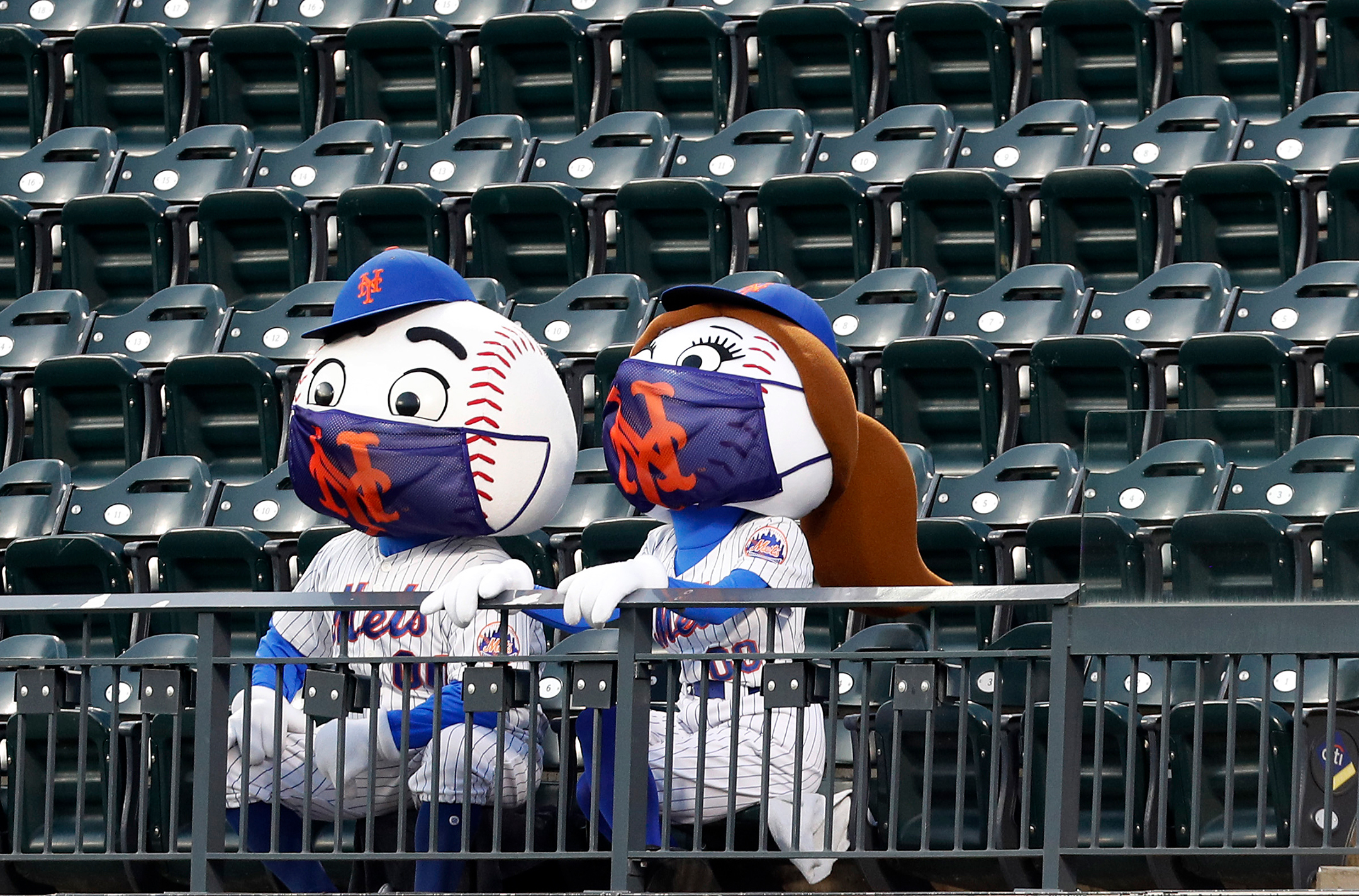 Is a pandemic-era Mets game still a geisterveranstaltung if Mr. and Mrs. Met are there to share an abstandsbier?

I’ve thought a lot this past year about all the clinical language we’ve had to adopt in our daily lives—from “quarantine” to “remote work” to “social distancing.” None of them sound quite as fun as autokonzert, or a concert where you stay in your car. Word coinage may be the rare social phenomenon where the Germans have the more playful, whimsical approach—and I’m a little jealous. As the covid-19 pandemic turned daily life on its head last year, researchers found that Germans coined more than 1,200 new words to help describe the situation. Maskentrottel roughly translates to “mask idiot,” used to describe someone who isn’t wearing their face mask correctly. Abstandsbier, or “distance beer,” is a safe way to get together for a drink. Most hauntingly, geisterveranstaltung, “ghost event,” is used to describe, say, a soccer game played in a stadium with no fans.

After a year of talking about “hybrid learning” and “asynchronous coursework,” the English-language education world could definitely use a little more pandemic-era creativity. Maybe the Germans have come up with a word for “class I take in my pajamas,” or “Zoom shade” for moments when you turn off the camera and roll your eyes at someone. Personally, I’d like to offer up stummkollision—“mute collision”—for what happens when my husband and I both take our computers off mute and try to talk at the same time. Sitting side-by-side and talking into screens for a whole year, we’ve had a lot of stummkollisions. —Stefanie Sanford 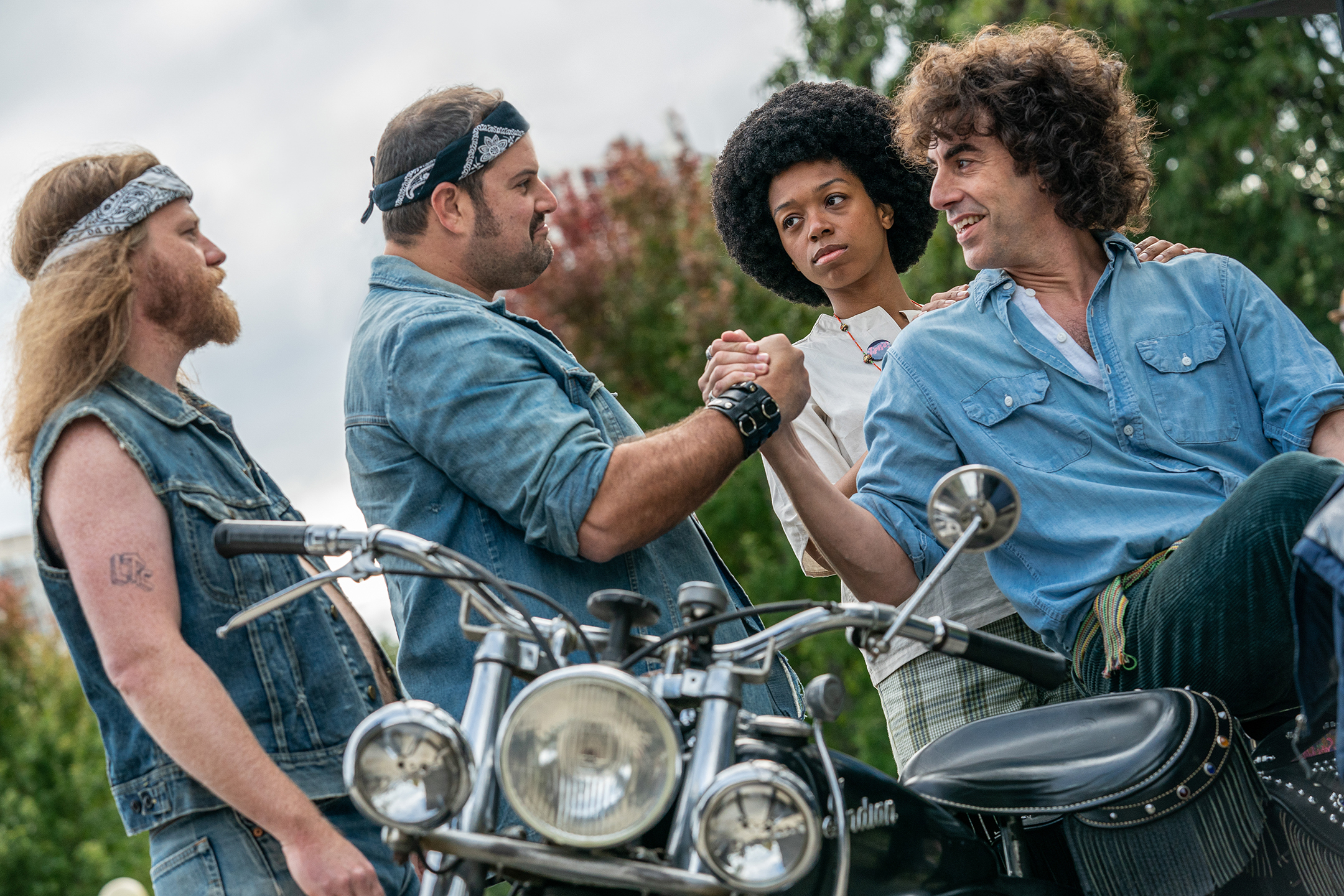 "Yeah! Always great to meet a fellow fan of wonky conversations had by attractive bureaucrats keeping America safe for democracy while walking to the local CVS!" (Or: Sacha Baron Cohen as Abbie Hoffman in "The Trial of the Chicago 7")

Turn On, Tune In, Walk-and-Talk

I grew up watching The West Wing and relishing Aaron Sorkin’s rapid walk-and-talk dialogue between impossibly witty adults with interesting jobs. And I think The Social Network is one of the great movies of our time. So when I heard Sorkin was writing the screenplay for The Trial of the Chicago 7, I put it on the (very small) roster of movies I might actually find time to watch. (Confidential to young readers: When you have kids and a full-time job, watching a feature-length movie without falling asleep is a major life accomplishment.) The film, which was released last year and was recently nominated for five Oscars, including Best Picture, is a little disjointed—more like a series of vignettes than a cleanly organized story—but I learned a ton about the anti-war protests of the 1960s and ‘70s and the arguments, factions, and tactical disagreements that seem to beset every big movement for social change: respectability politics versus performance art, radicalism versus incrementalism, inclusion versus focused goals.

Sorkin decided to foreground that struggle after a series of interviews with Tom Hayden, who led the more mainstream, buttoned-up Students for a Democratic Society during the Vietnam War protests. (He’s played by Eddie Redmayne in the film.) Hayden’s stylistic opposite was Abbie Hoffman (played by Sacha Baron Cohen), the provocative, radically-minded activist and artist. One of the stories Sorkin really wanted to tell, he explained in an NPR interview, was “the friction between Tom and Abbie, two guys who plainly can't stand each other, who are on the same side, want the same thing, but they each think the other is doing damage to the cause.” Such a fascinating lesson for today’s activists as they try to translate energy into real policy change. I’d definitely recommend the film, and if it leaves you yearning for a deeper dive on the role students played in the anti-war and social justice movements of the era, check out this New Yorker piece by Louis Menand chronicling the rise of the New Left on university campuses, how it earned national influence, and changed the course of American politics. “The movement that started in Port Huron and Berkeley soon got sucked into the political maelstrom of the late sixties,” Menand writes. “It was always a student movement.” —Eric Johnson 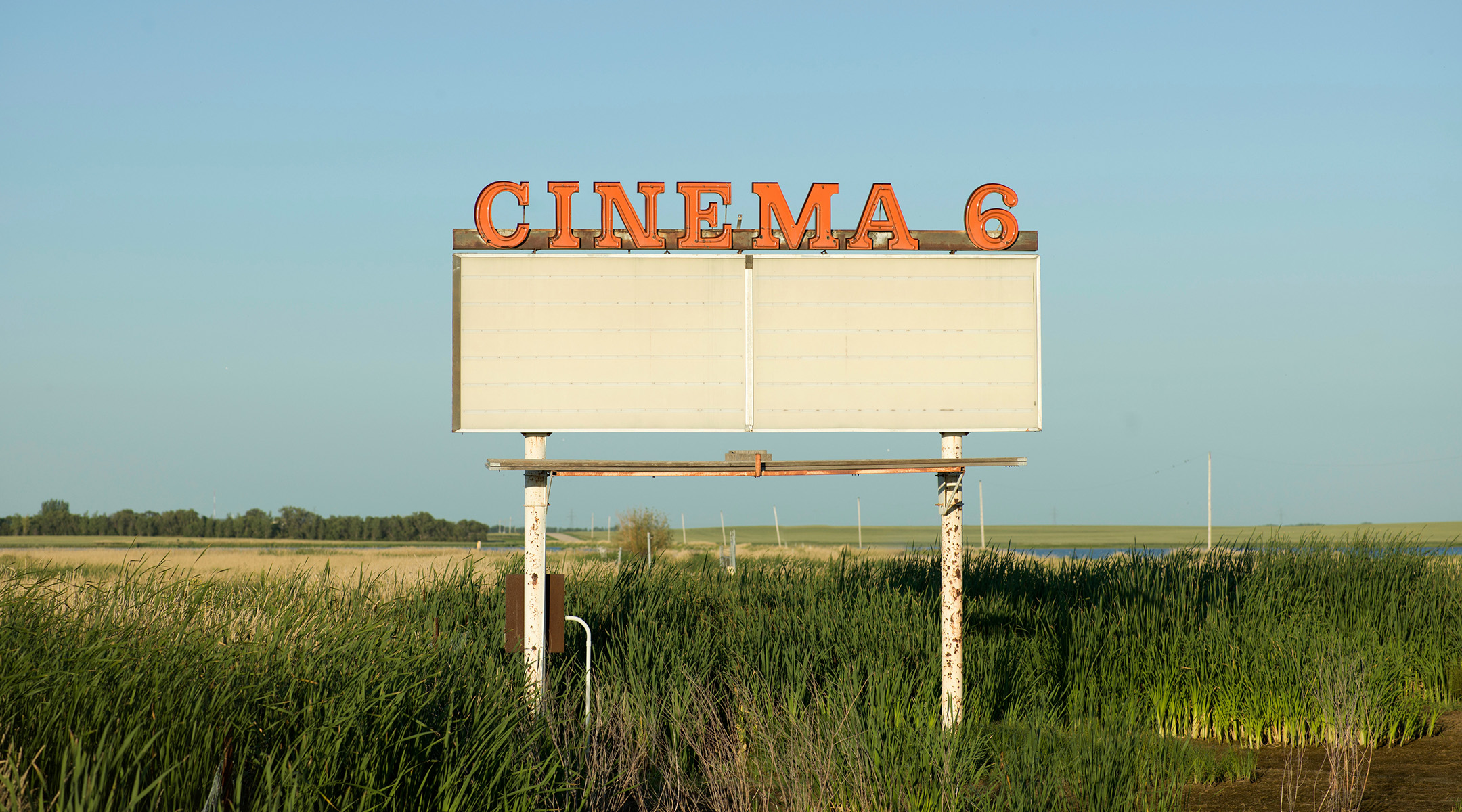 Once upon a time in Hollywood, a six-screen movie theater was the pinnacle of moviegoing. Before the dark times. Before the megaplex.

Attack of the 24-Screen Megaplex!

Going to the movies is at the top of my list of things to do once it’s safe to be in the world again. Nothing is a close second. I love streaming stuff at home, but there is nothing like settling into a seat, watching the lights going down, and getting absolutely absorbed into another universe. I’ve been going to the movies for nearly as long as I’ve been on this planet—one of my earliest memories is seeing Top Gun, first run, with my parents—and I’ve lived in theaters for as long as I’ve been independently mobile. Moviegoing led to studying film in college, writing about film as a career, and arguing about film and how to watch it with friends, family, and Twitter. How we watch movies, and where, is woven into the fabric of American pop culture and inspires fervid takes on the value of the multiplex versus how disruptive Netflix truly is. Martin Scorsese dug into this recently in an excellent essay about Federico Fellini for Harper’s; Steven Spielberg, a couple years ago, had a decidedly less cogent take. Personally I think the multiplex is both essential and villainous, a locus of movie culture but also the grease for our glut of crap blockbusters, an opinion only partly informed by my 16 months working at a 10-screen multiplex in Pittsburgh while in college. (A fun job that provided a lifetime of stories thanks largely to the degenerates I worked with.)

I spend an unhealthy amount of time imagining a post-pandemic rethink of the moviegoing experience—not only what we see and how but where—so the latest episode of the podcast 99 Percent Invisible, chronicling the rise of the megaplex, was naturally a must-listen. And I learned a lot: how the first megaplex was the AMC Grand 24 in Dallas; how the shape of modern moviegoing is thanks to the crazy schemes of the former head of the AMC theater chain; how the megaplex cleared the way for the last great movie year, 1999; and how it’s responsible for all the tentpoles and sequels and remakes clogging the big studio release schedules. If you have any interest in moviegoing, why we’re up to the ninth installment of the Fast & Furious franchise, or the role of tacky corporate architecture in American pop culture, you owe it to yourself to give this show a listen. Just make sure to have your favorite theater snack close at hand. And please take your trash with you—ushers are people too! —Dante A. Ciampaglia