Pickleball, Fun Facts, and William Klein: Five Things That Made Us Smarter This Week

From icebreakers to imagemakers, we learned a lot in the last seven days 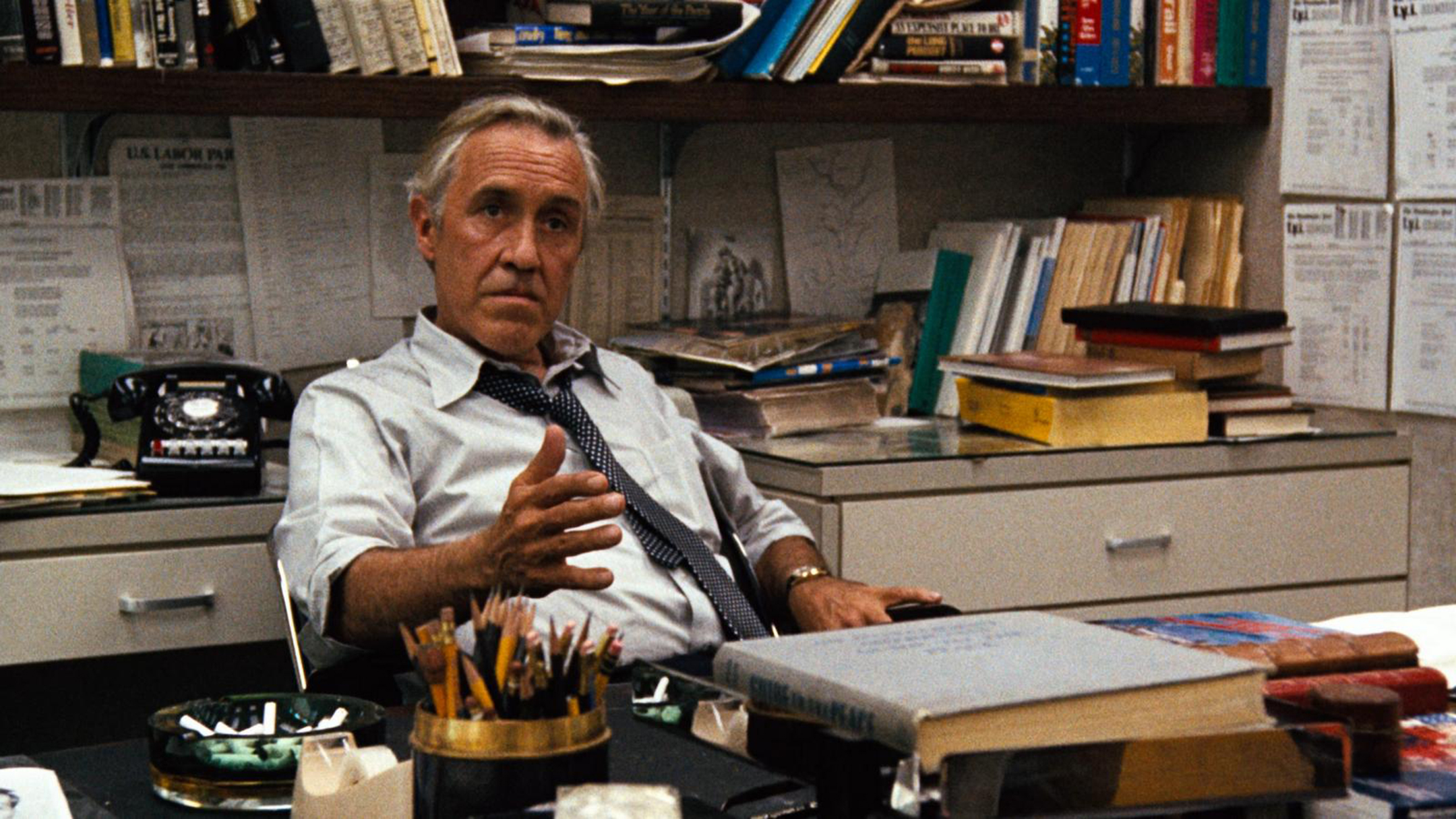 Credit Where It’s Due

Over at Press Watch, founder and media critic Dan Froomkin makes a novel—and long overdue—suggestion: put editors’ names on stories alongside writers’ bylines. His September 1 piece, “Anonymous editors are a bigger problem than bylined reporters,” was nominally prompted by a recent round of intranewsroom squabbling. The specifics don’t matter. Was does, though, is why Froomkin’s suggestion is such a good one. Editors serve a purpose: to keep reporters from making egregious errors that could harm a source, a story, a publication, or the reporter themselves. But in the era of algorithmically-determined trending lists, search results, and newsfeeds, editors are also tasked with sundy other duties that fall under the disreputable heading of “search engine optimization.” And that creates problems. “Reporters are personally responsible for anything that appears under their bylines,” Froomkin writes. “But some news articles—particularly political news articles—are so ill-conceived, so misguided, and so disconnected from reality that you can’t blame the reporters. At least not entirely. In those cases, it’s the editors who are most at fault. …  [Mid]-level editors…make [stories] happen. They are the ones giving the orders, writing the headlines, failing to fix mistakes, and—too often—publishing garbage.”

I’ve been an editor for close to 20 years and have long thought my colleagues should share the heat reporters face. My brief stint at Newsweek, where I was deputy culture editor, radicalized me on this point. The publication kept spreadsheets to track mistakes that made it into published online articles that then required corrections. That is, articles that were written quickly by writers grinding out four, six, eight stories a day; edited quickly by someone reading eight, 10, 12 stories a day; read by a copy desk; and then put online. If a story required a correction, Newsweek penalized the writer by removing that story’s traffic from their monthly tally—a potentially huge blow for people whose salary was tethered to and depended on the traffic their stories generated. Editors, however, might have gotten a stern Slacking but otherwise escaped unscathed. Why? I still don’t understand. Though I hold it as a point of pride that, one day, the news director came over to my desk and asked if I had been neglecting to log errors. “No,” I replied. “The culture team just doesn’t publish stories with mistakes.” And it was true. I would have loved to have had my name on my writers’ stories—not to hog any glory from their recap of the latest episode of Dr. Pimple Popper, but to tell our readers that this is a team, that it has an editor, and that that editor is confident and proud enough of these writers to stand with them rather than hide behind their title. It’s a mentality that should be required of every editor—and in return, they should get a byline.

By the way, I edit everything you read on The Elective. If you ever need to talk things over, here’s my email. —Dante A. Ciampaglia 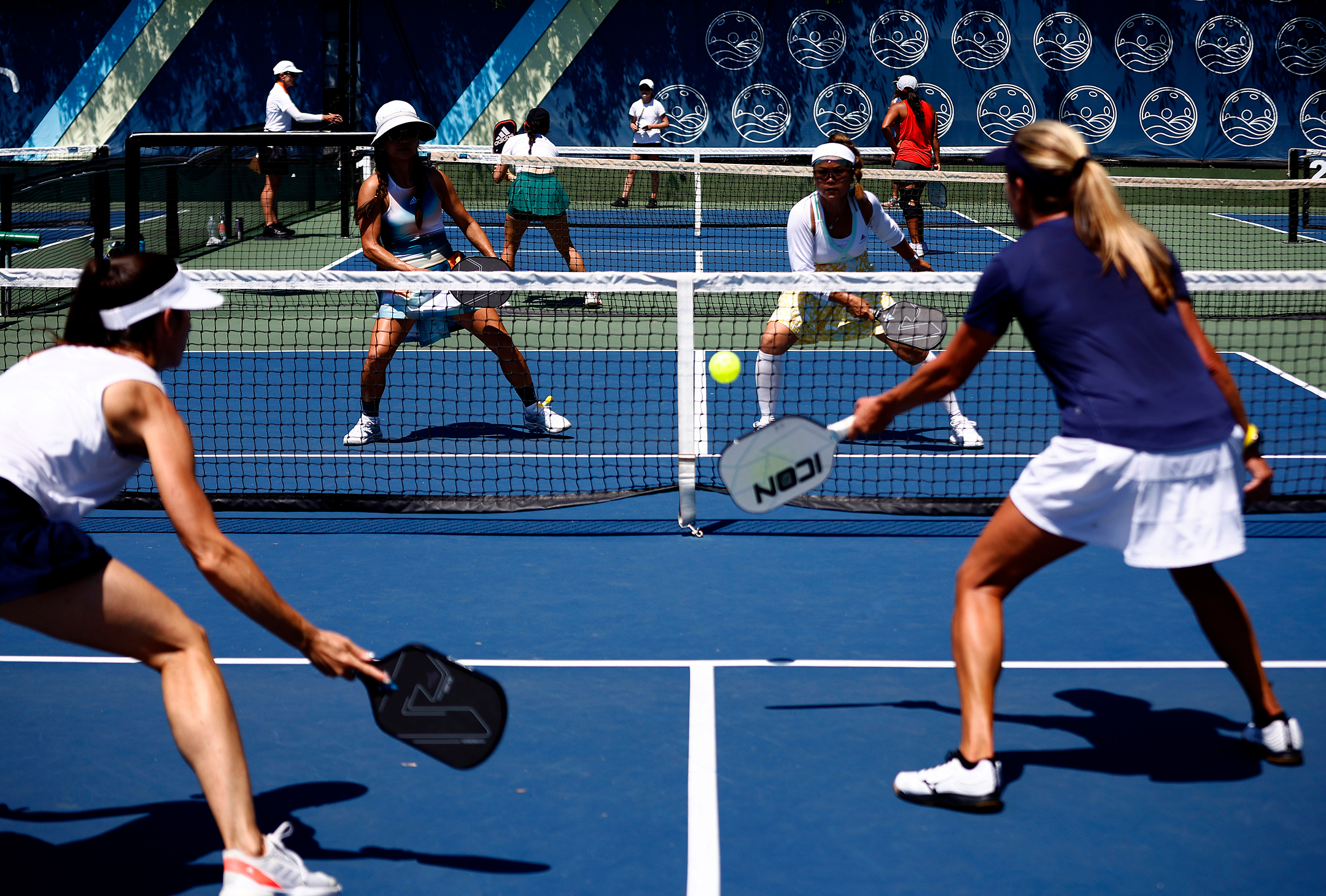 Dani Nguyen and Janice Kim compete against Elizabeth McCullagh and Emily Stolan during the USA Pickleball Newport Beach West Diamond Regional at The Tennis and Pickleball Club at Newport Beach on September 03, 2022, in Newport Beach, California.

Pick a Peck of Pickleballs

More than a year ago, College Board colleague and Elective contributor Karen Lanning told me about something new she tried over the weekend. She told me about how much fun it was to play, and added that her husband declared it the “sport of the future!” That sport was pickleball, and the rest of the world has caught up with Karen and her husband because, clearly, pickleball is the sport of NOW.

Ever since Karen told me about her experience, pickleball has lingered in the back of my mind—especially as I’ve been lamenting how a shoulder injury was keeping me from playing tennis, a sport I’ve enjoyed since elementary school. At the same time, I started seeing pickleball everywhere. At local parks, teams took over tennis courts and played what looked like a mix of tennis and ping pong. My local pool started debating whether to make the (barely used) tennis court more pickleball friendly. What started as the strange topic of conversation—and a sport that only dominated retirement communities—has blown up to a real-deal cultural phenomenon generating three new venues a day to keep up with demand. And the second largest demographic of player? The 25-34 year old set.

As I’ve learned, this boom in popularity has brought some drama: the competition with tennis, factions of pickleball players’ associations, investors who see it as a lucrative money-making opportunity. But there’s also love.

I think it’s time I see what all the fuss is about. Karen, need a pickleball partner? But first, you’ll have to teach me what a flabjack is. —Michele McNeil 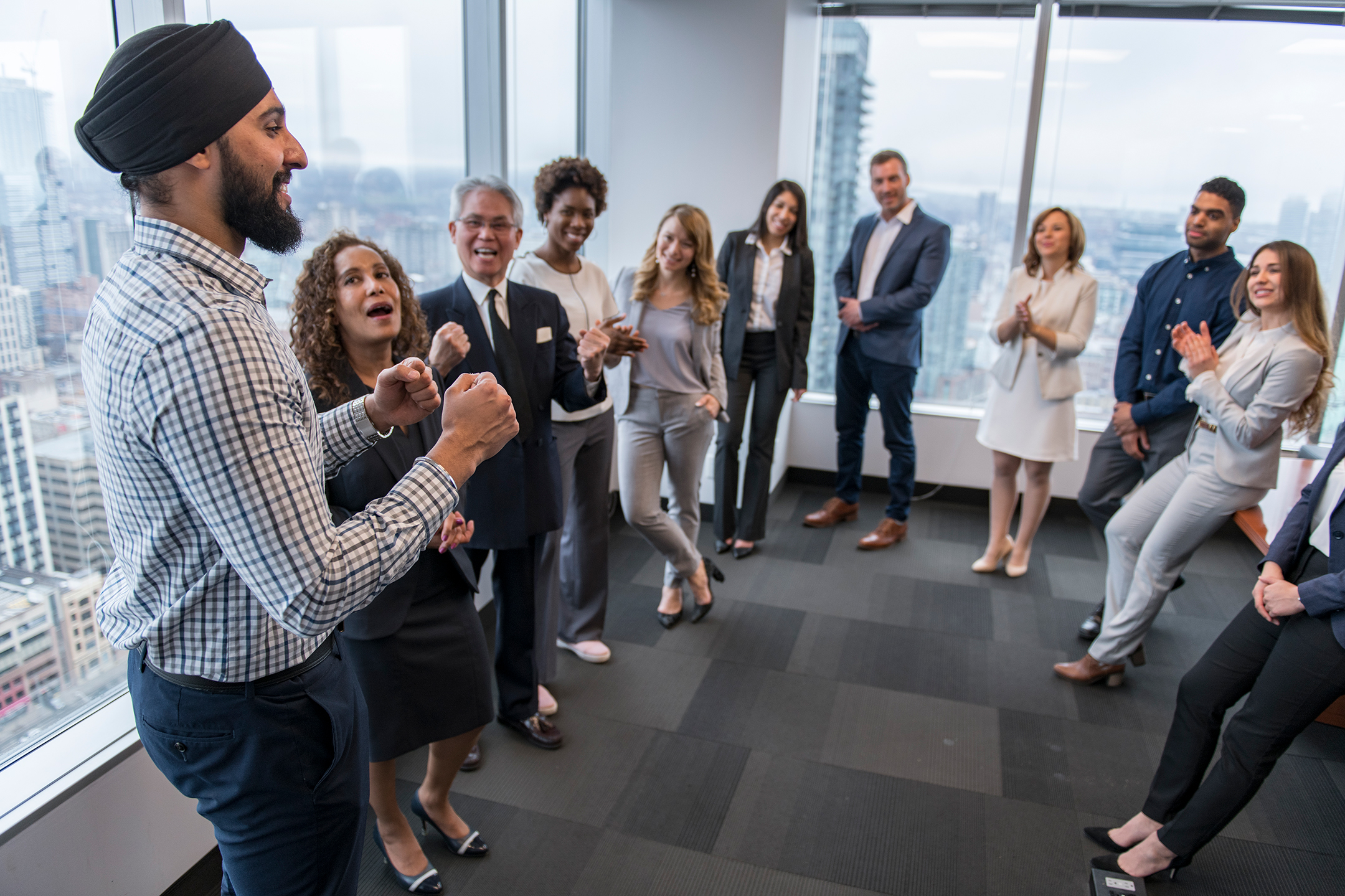 OK, before we get this meeting going: trust falls! Who wants to be the first volunteer to lean out the window? One of your colleagues is outside to catch you!

"Let's go around the table and say your name, where you're from, and a fun fact about yourself." The dreaded icebreaker. I've lost track of the number of times I've been in meetings where this has been the opening statement—or where someone has tried to come up with a more interesting take on it. I'm guilty of this myself. I've even been in professional icebreakers that have included obstacle courses and scavenger hunts—at the start of an hour-long meeting. [NOPE. -Ed.] Kate Cray, writing for The Atlantic, is adamant in her assessment of this infamous workplace standard practice: "Nothing is less fun than a fun fact." While this statement feels hyperbolic, Cray digs into how to effectively create comfortable and creative work environments—and whether icebreakers actually work. She has a few different reasons for her argument against fun facts: staff frequently don't have time to prepare, view the prompt similarly to public speaking, and fear judgment.  But these concerns also bring up a larger question of how to build connection in increasingly remote workplaces. I have found a lot of value in remote and hybrid work. I also understand the aversion to the kinds of "forced fun" situations Cray references that feel arbitrary and don't lead to meaningful progress on work. That said, I believe there's a way to foster relationships and connection, whether we're online or in-person. Cray interviews a variety of professors in the business world who advocate for more creative questions and games and more intimate, small-group discussions. In the right contexts, I've seen these ideas effectively build relationships. They're enhanced by intentionality, consistency, and genuine interest. I feel most connected to my colleagues when I know what to expect, we are invested in our time together, and when I feel like my coworkers truly care about what I have to say, whether it's strictly professional or something fun—like the fact I'm from Indiana and also a British citizen. —Hannah Van Drie 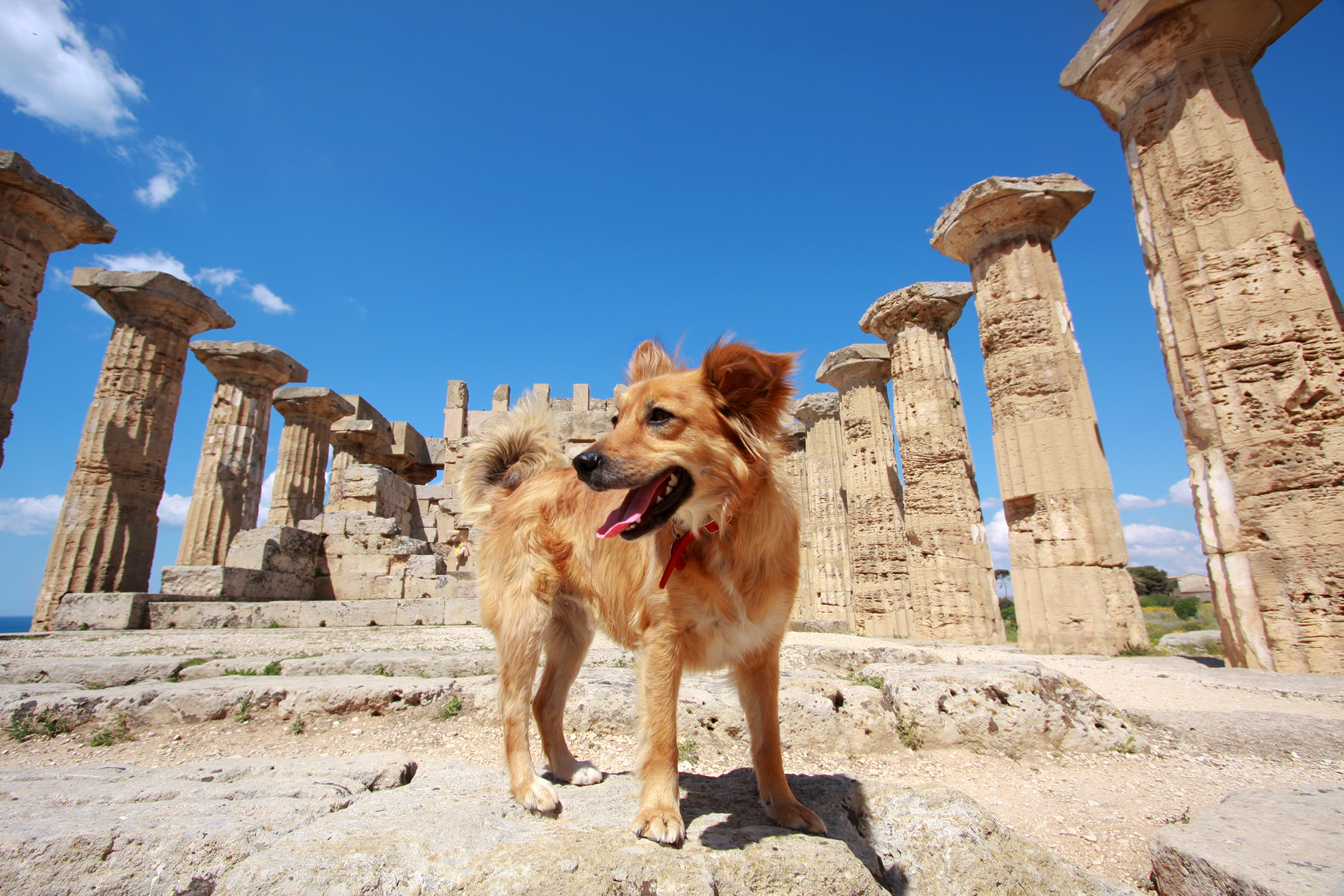 Temple of the Dogs

America’s love of dogs would be quite familiar to members of the Roman Empire, who likewise had an affinity for keeping pet dogs. But 2,000 years later, we’d be hard-pressed to recognize some of the pooches kept by ancient Romans. Three of the Empire’s most popular breeds by size have gone extinct, the only evidence of these once-common pups now limited to ancient reliefs and artwork unearthed by archaeologists. Recently, YouTuber toldinstone revisited the emergence of those three classical canines in an excellent video essay, explaining, “Since wealthy Greeks and Romans could be very particular about the dogs they used in hunting kept as pets, a few varieties that we might call ‘proto-breeds’ emerged.” Those varieties were Molossian hounds (large boar-hunting big game dogs), Laconian hounds (slim, swift deer and hare-chasing mid-size dogs), and Maltese dogs (small easy-to-tote lap dogs similar in size/shape to modern Pomeranians).

Romans weren’t the first civilization to domesticate dogs, but they were part of a long line of cultures that utilized them for hunting. It’s often theorized that this hunting relationship was the motivation for wolves being domesticated in the first place. But in a paper recently published in Anthropozoologica, historian Julien d’Huy of the College of France in Paris hypothesizes that dogs were first utilized for spiritual purposes, based on their appearance and function in a large number of ancient myths. “D’Huy found three core storylines for the earliest myths related to dogs,” writes Elyse DeFranco in ScienceNews. “The first links dogs with the afterlife, the second relates to the union of humans and dogs, and the third associates a dog with the star Sirius. Versions of these stories are found in many cultural regions around the world. He then borrowed statistical tools from biology to create family trees of myths, showing how the stories evolved as they followed humans from one region of the world to another.” Such research certainly deepens the long-running narrative of human fondness for dogs. Personally, I’d like to know more about how on-the-move ancient humans found time to shrink wolf-sized canines down into those now-extinct Maltese dogs, which were perfect fits for Roman cloak folds, and led to their 21st century spiritual heirs: Chihuahuas riding in designer handbags. —Christian Niedan 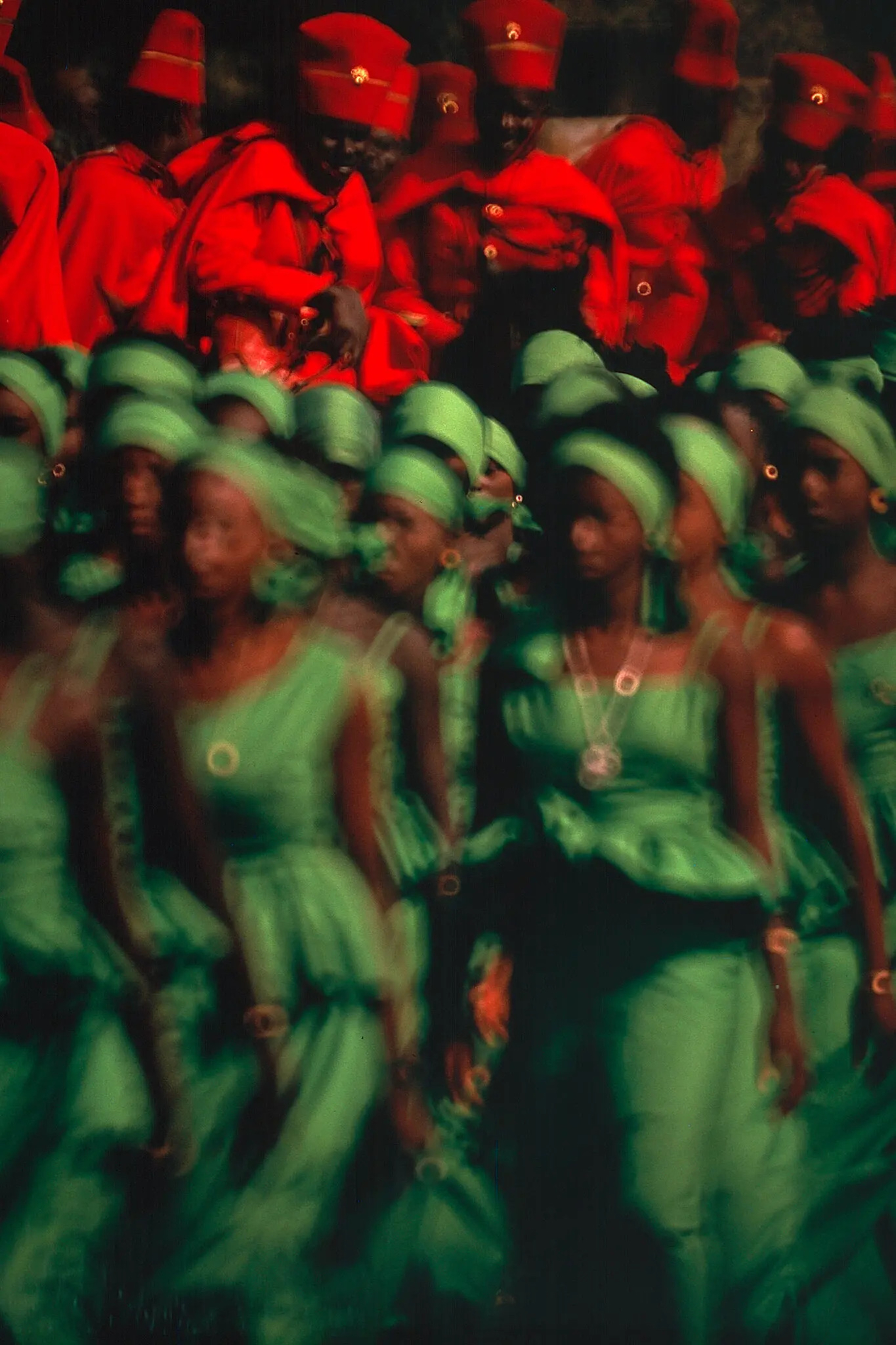 The Eyes of William Klein

“If you look carefully at life, you see blur. Shake your hand, blur is a part of life.”  That’s photographer William Klein, who died on September 10 at 96. He’s in my personal pantheon of the most influential American photographers, along with (in no particular order) Gordon Parks, Teenie Harris, Stanley Kubrick, Weegee, Garry Winogrand, Berenice Abbott, Walker Evans, Dorothea Lange, and Ruth Orkin. Like all great artists, these shooters reframed how I see the world—both through a viewfinder and in my everyday life. But Klein, like Parks and Evans especially, rewired how I think about photography through their words as much as their pictures. I saw the quote above printed on a wall at the International Center for Photography’s exceptional William Klein retrospective, and it was one of those Vertigo-effect moments. We’re all taught to avoid imperfection, particularly blurry images in photography, but no, of course he’s right. Life is imperfect and blurry; why should our pictures be false mirrors? And Klein walked the walk. So many of his images and films, particularly his fashion work, are crisp and perfect, but some of his best images vibrate. I had never seen the photo above until encountering it at the retrospective and it stopped me dead in my tracks. It’s a masterpiece of color, framing, composition—and blur. “What would please me most is to make photographs as incomprehensible as life,” Klein was also quoted at the show. He accomplished it, his work a monument to what can be accomplished when we give our assumptions and expectations a little shake. —Dante A. Ciampaglia