Shop Class Is Back

Skilled trades are returning to schools across the country, and Gen Z students are here for it

When we talk about the 21st century workforce, we tend to focus around STEM careers—that is, jobs in science, technology, engineering, and math. But not all of today’s students (or currently employed adults) will find jobs as coders or other tech-industry workers. How can that conversation be expanded to account for more students—and more careers?

One answer might be surprising in our white-collar age: blue-collar skilled trades.

In 2020, more schools boast laptop-to-student ratios and programming curriculums than a new lathe or jigsaw. But shop class is having a kind of resurgence.

This school year, Nick Pearson at Ukiah High School, in Ukiah, California, began teaching “Introduction to Construction.” Pearson came to the school as its auto shop teacher 10 years ago and moved into its woodshop 4 years ago, which led to the creation of a bigger construction program born out of the ashes of the state’s worsening wildfires. One goal for his classes: to build tiny houses. “I want to build one each year that we will get certified, then hopefully sell it and help pay for the next year’s project,” Pearson told the Ukiah Daily Journal in November.

At Dallas’ Skyline High School, teacher Doug Palmer was hired to rebuild the school’s shop program. He prepares his students to work in building trades with hands-on experience and by bringing in builders to speak to his classes. The Skyline class was resuscitated by a shortage of construction labor in Texas. Immigration crackdowns have led to a need for 20,000 to 30,000 workers in Dallas-Fort Worth alone, according to the Dallas Morning News. That has also driven up wages: In October 2018, construction workers earned, on average, $28.50 an hour, outpacing the $26.02 average of private sector employees.

For Gen Z students—those born between 1995 and 2010—the choice to work in a construction trade may come down less to familiar tech and more to an effort to avoid the heavy student loan debt incurred by Baby Boomers, Generation Xers, and Millennials. The authors of [email protected], published in 2016, found that “75% [of Gen Zers] say there are ways of getting a good education besides going to college.” It’s a stat touted by Education Dive in its January 2019 article “Why the construction trades are a draw for Gen Z.” 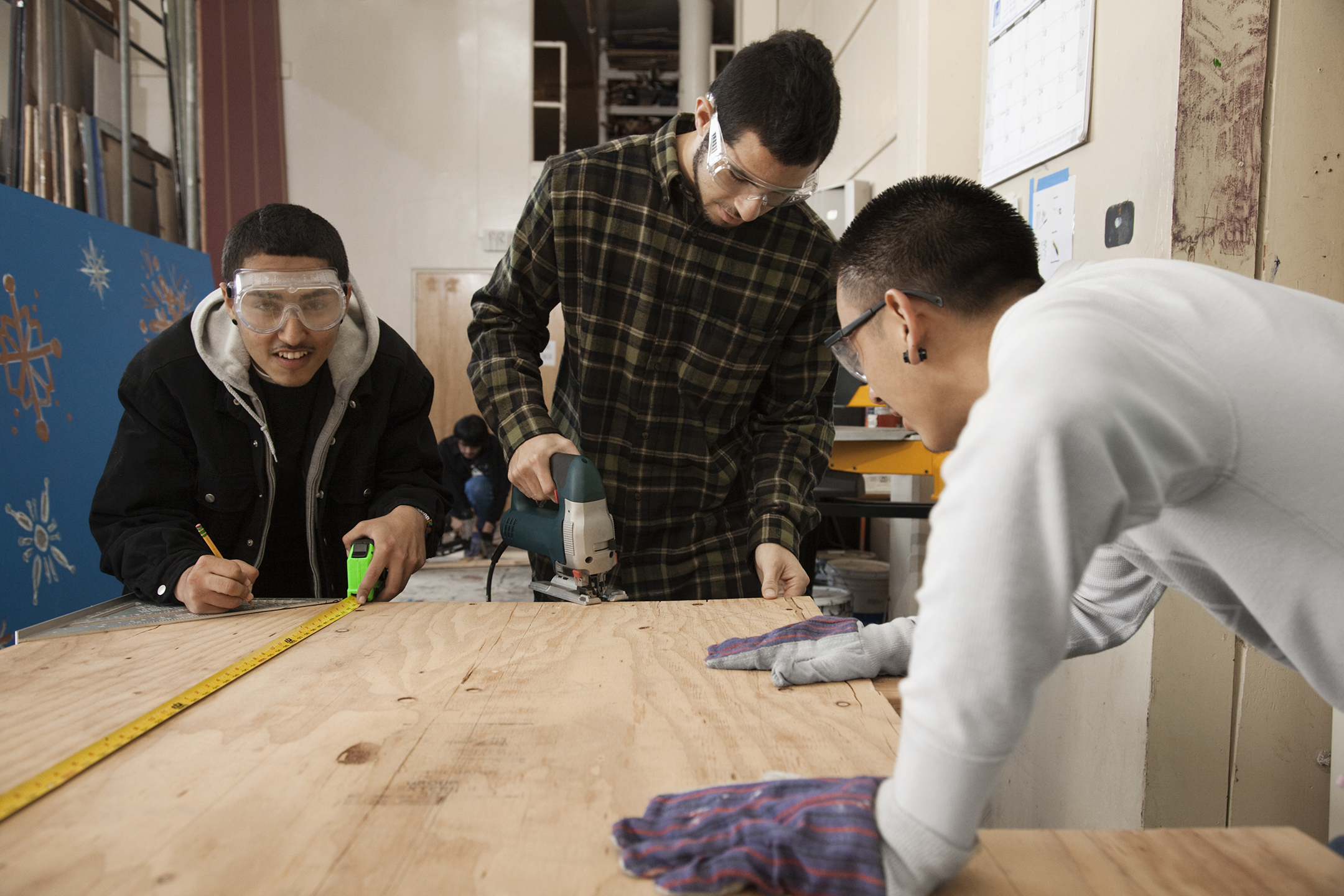 Build Your Future (BYF), part of the National Center for Construction Education and Research, defines its mission as “recruiting the next generation of craft professionals.” Its interactive craft labor map tracks demand for various skilled jobs by state. Through December 2022, it foresees carpenters (2 million), masons (839,000), pipefitters (636,000), heavy equipment operators (609,000), and electricians (505,000) as among the top in-demand construction trades.

BYF also produces digital and paper trading cards, which highlight the minimum yearly salary (minus overtime and incentives) and required education for top construction trades. Those salaries include $56,877 for carpenters, $56,784 for masons, $62,697 for pipefitters, $60,828 for heavy equipment operators, and $67,269 for electricians. The most in-demand job of construction laborer (2.23 million) has the lowest starting salary among the cards at $38,890.

So a lot of good-paying jobs are out there for students who want to train and learn their way into the skilled trades. But there’s still an issue. These aren’t the sexy kinds of jobs that social media trains so many youths to expect (such as being an influencer), and they’re not tickets to instant riches as tech jobs are all too often portrayed.

“How do we change the perception about construction as this knuckle-dragging industry, and that technology is really changing the way we build the world—because it truly is,” Darryl Kysar tells The Elective.

Kysar is Director of Procore.org, the outreach arm of California-based construction management software company Procore. Part of Procore.org’s mission is to give away its construction software for educational purposes to more than 250 universities across 9 countries. But its engagement efforts reach even younger audiences in junior high and high school. The organization worked with the construction industry’s ACE Mentor Program of America to introduce a Procore-created group game called Brick by Brick, which incorporates a smartphone or tablet and a laptop with internet to create “an entertaining way to introduce the basics of project management [and] an effective way to teach students about the teamwork and technology a career in construction requires.”

Kysar notes that tablets and smart toolboxes are ubiquitous on today’s construction sites, along with ever-improving smartphones. He also says that such tactile tech is more natural for Gen Z than anyone before them.

“Millennials weren’t a true digital generation. If you go to the top end of that generation, all of them didn’t have iPads and computers in their classrooms,” Kysar says. “Because we think this way as a technology company, which is different than most of the rest of the construction industry thinks, we feel it’s our obligation to help the industry advance and look at the way that they can communicate with this.”

“Eighty percent of the jobs in North America are not staffed completely in the construction sector,” he adds. “They can’t find enough people to work them because of the perception that it is a purely physical manual labor job when it’s not. Technology, from tools to our software, is changing the way things are built.”

The Beginner's Guide to Microcredentials