Welcome to The Elective’s digital art museum, dedicated to the incredible work of AP Arts students. This week we feature a painting made by Oliver Benbow from Dekalb High School in Dekalb, Illinois.

This week we feature a painting made by Oliver Benbow from Dekalb High School in Dekalb, Illinois. 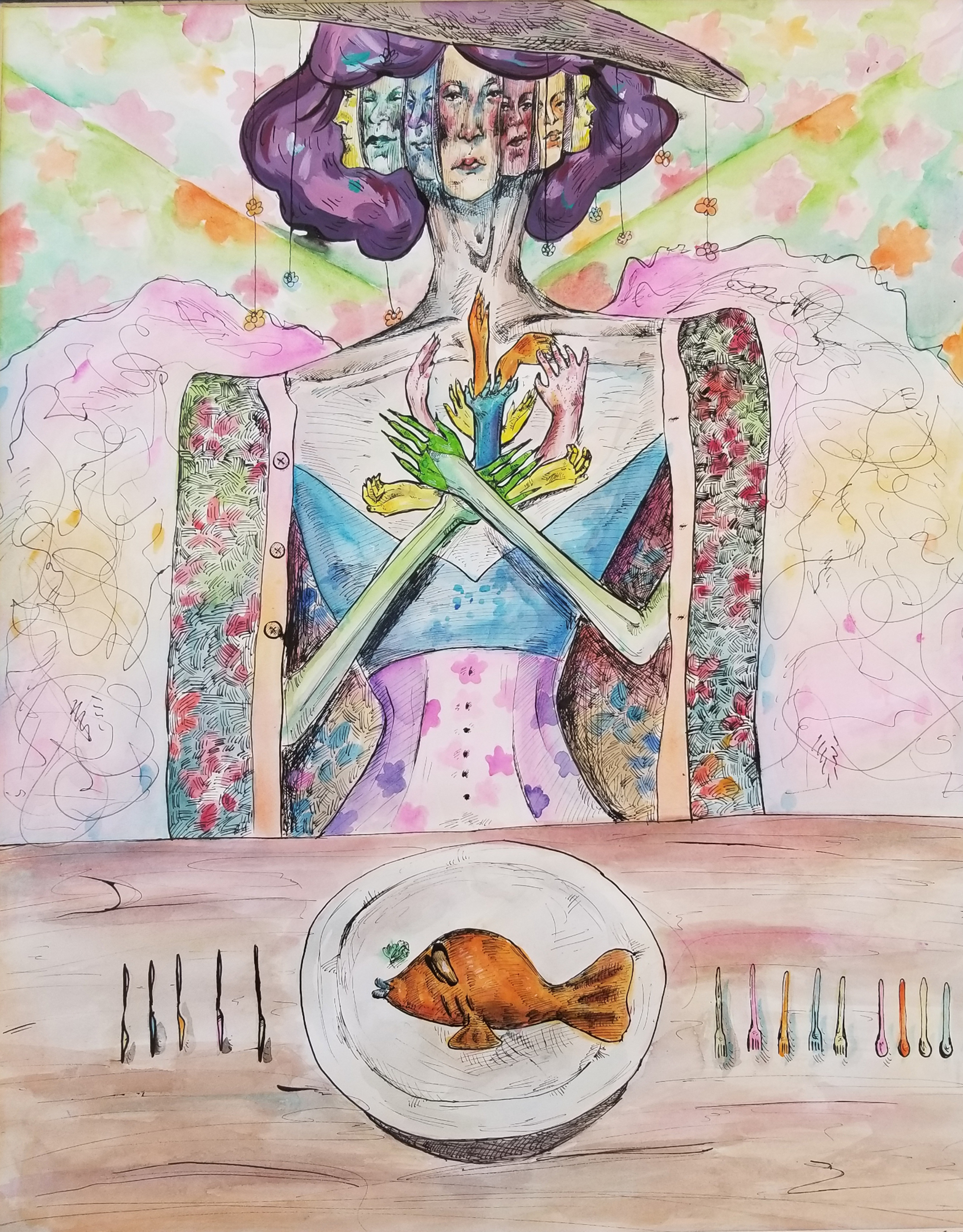 Here’s Oliver’s statement on the work:

“This piece depicts a figure with many faces and hands sat down to eat dinner. They are dressed in elegant clothing and with a large cloak of feathers behind them.

“This work is a physical representation of how a person can hold multiple gender identities in a single body. I wanted this piece to show how these states of being coincide and cohabit, while being separate, hence the faces being drawn in a way similar to a Rolodex and the hands being arranged almost randomly.

“This was the second piece I made for my portfolio. In this piece, I wanted to experiment with silhouettes and clothing because of the influence I want camp and flamboyancy to have within my pieces. I found that shoulders that were very broad mixed with a very long neck gave me a lot of flexibility when positioning the figure while also making the figure more demanding and attention-grabbing when the piece was finished. Many of my figures were based on the silhouette of mannequins and fashion sketches.

“Many of my pieces were inspired by camp, a form of performance and dress described by Susan Sontag in 1964 as ‘Camp is its love of the unnatural: of artifice and exaggeration.’

"I used this, along with many European court fashions from the Rococo and Elizabethan periods to dress my figures. Camp was an important part of my portfolio because of how eye-catching it was and also its involvement in the queer and transgender communities.

“My sustained investigation was to introduce the culture of transgender and queer people into my conservative community. I felt that making pieces very bold was an important part of this process. Making pieces that could be considered ordinary could make my message seem unimportant to those who looked at it. Instead, I made them flamboyant and colorful to attract attention while also making figures look strange and almost disfigured. I felt that engagement was important with these pieces because they hold deep meaning to me. Bold outlines made in ink were used to make the piece seem simple, while watercolor and other mediums were used to add clear details that would make the piece seem simpler to understand at first glance, while watercolor and thin lines would make the piece more detailed and realistic.” 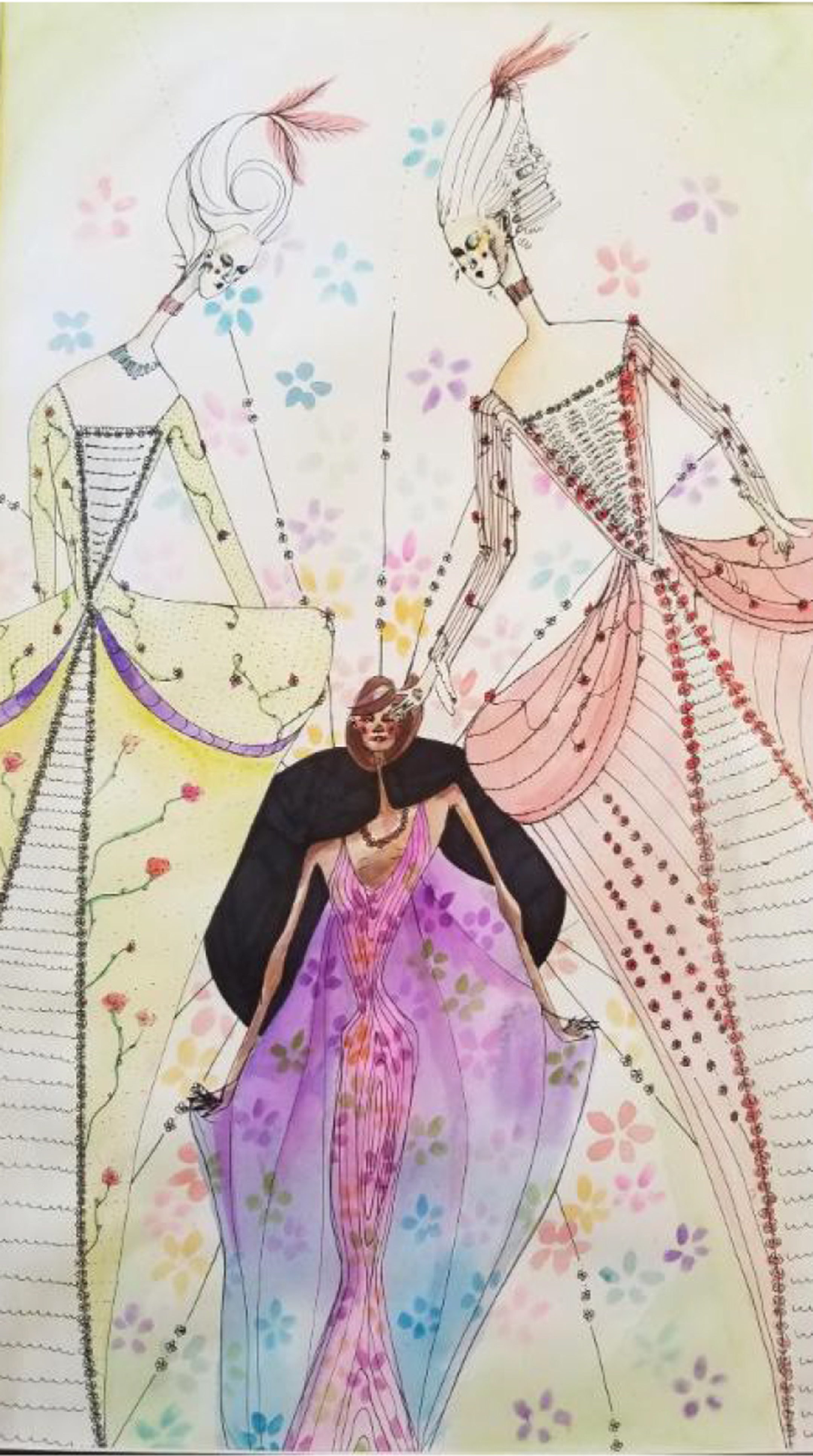 Importance of mentorship among the trans community. Mentorship is hard to reach for most trans people. Tall figures show poise and attention to detail in older trans people, as they mentor the small figure.

“Oliver is an incredibly gifted artist who had so many ideas led by his self motivation. He is ambitious with his work, challenging himself with various sized works and multiple media per piece. Oliver was very drawn to the human form, and the movement created a dialogue that could be formed through its composition. Oliver’s style can be recognized throughout his portfolio in the execution of his forms, repetition of colors, and shapes. Oliver was a prolific artist who was constantly researching, planning, and experimenting in his sketchbook. Throughout the year, Olivier filled 5 sketchbooks experimenting with media and ideas.

“Before starting any project, Oliver likely had 10-15 pages of planning done in his sketchbook. He would start with his topic that stemmed from his sustained investigation question. Before each project, we would sit down together and I would ask him, ‘What do you want to say with this piece?’ For this particular piece, Oliver wanted to address the following questions: ‘How can I present a form that is both masculine and feminine in body and mind? How can I present to the audience the idea that people have different states of mind, and how can I represent that in the painting?’

“As Oliver worked through this piece, he was careful to pay attention to all the details of the piece. He wanted there to be a lot of juxtaposition through the faces. Oliver demonstrated this by using intentional angles of the face as you moved from the center to each side creating faces that do not defy one gender to another signifying multiple identities in one person. There was careful detail to the way the cape looked to create its transparency and the texture to add femininity in the fabric. Oliver spent some time looking at different angles of hands and practiced the various perspectives of how he would place them all together on the composition.

“Oliver's portfolio evolved through the year. At the beginning of the semester we sat down and worked on what each student's sustained investigations would look like and what ideas would be driving their work. As Oliver’s work developed, his sustained investigation question focused more on the education and culture of transgender people in his community.

“Through the year, Olivier taught me a lot as an educator. I have never seen someone have a sketchbook full of so many ideas and great work. At the end of the semester, we had to eliminate work, because he had created more than could be submitted. Oliver challenged me on each project to experiment with new media and ideas. There were many times when we had to learn together to trust the process. Oliver reminded me it is important to find areas that students are passionate about, help them find their style, and facilitate their work while continuing to push them to dive deeper into their ideas.”

And here are a few other works from Oliver’s portfolio: 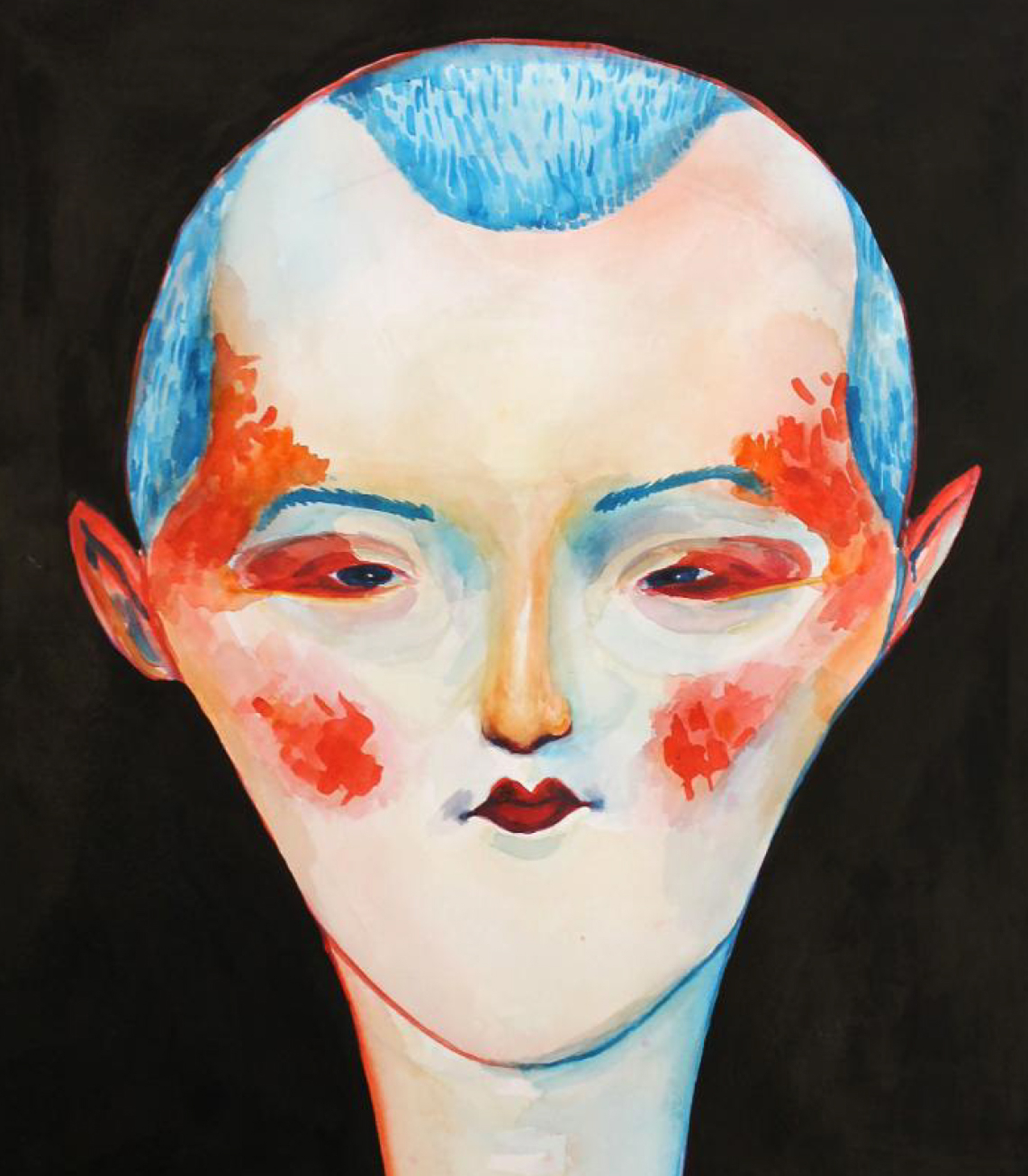 Large and exaggerated proportions allow the audience to make unwarranted assumptions about the figure. 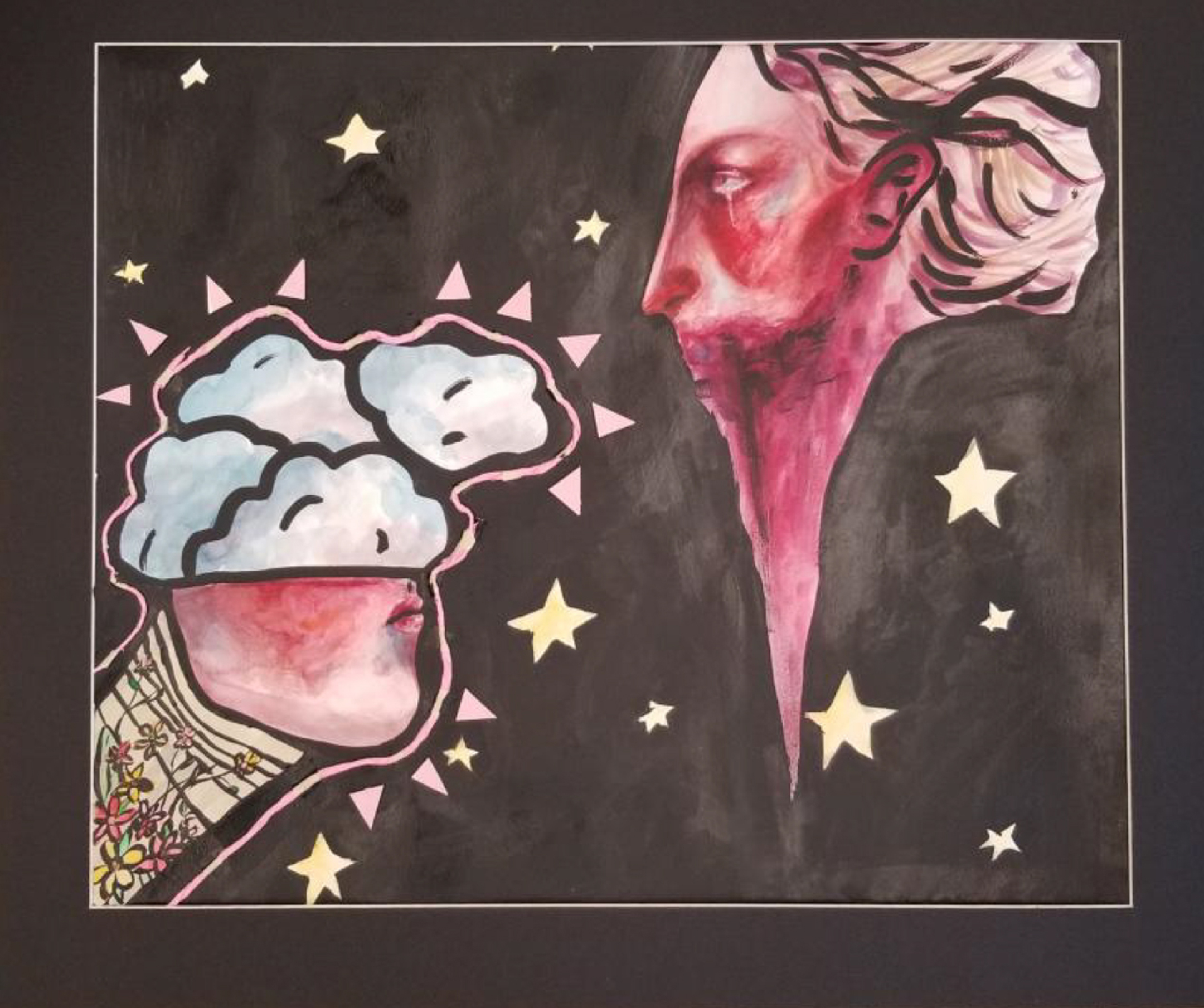 The separation of the head shows selective stigma towards trans people. The emphasis of one outshines the other. 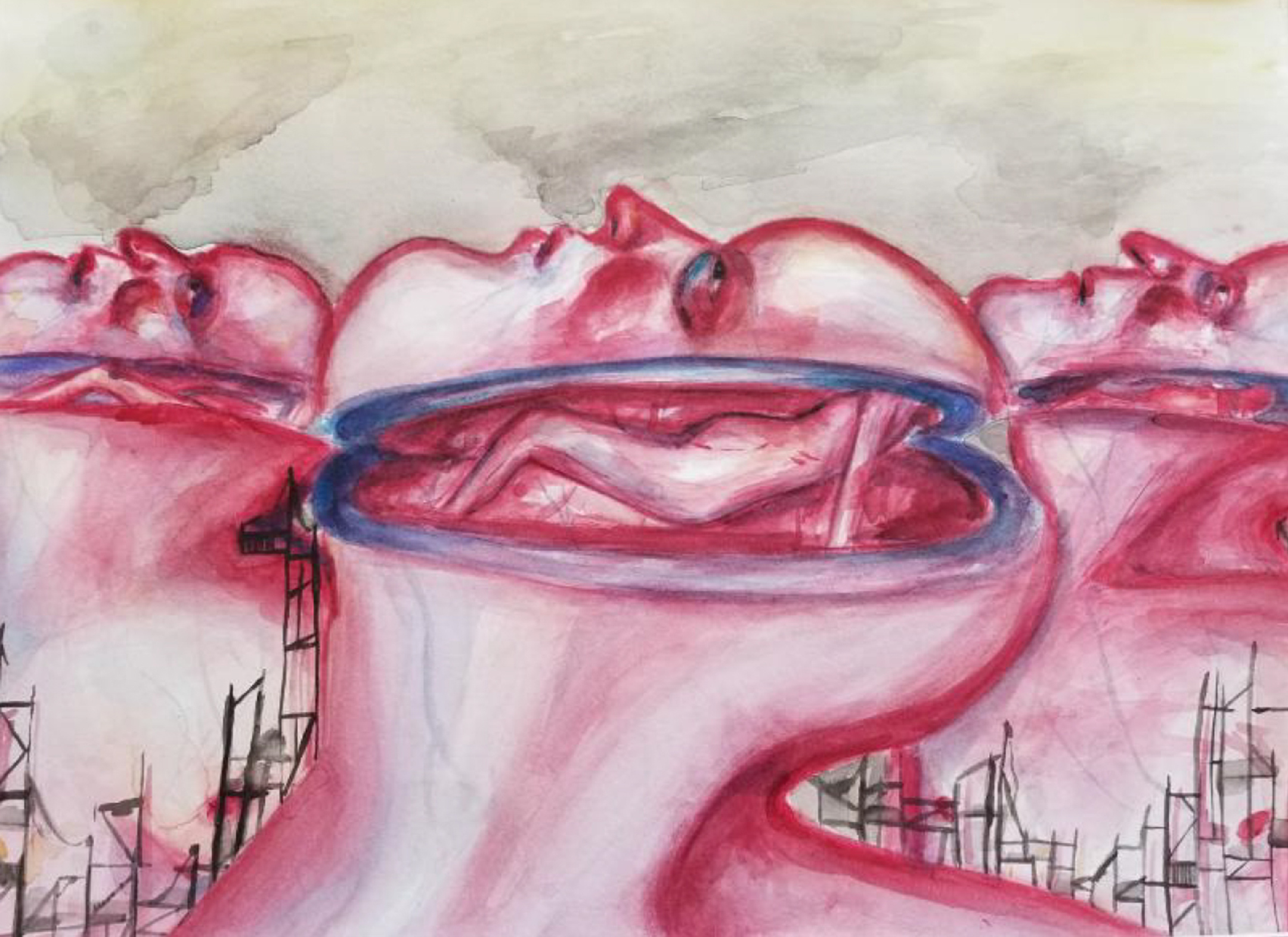 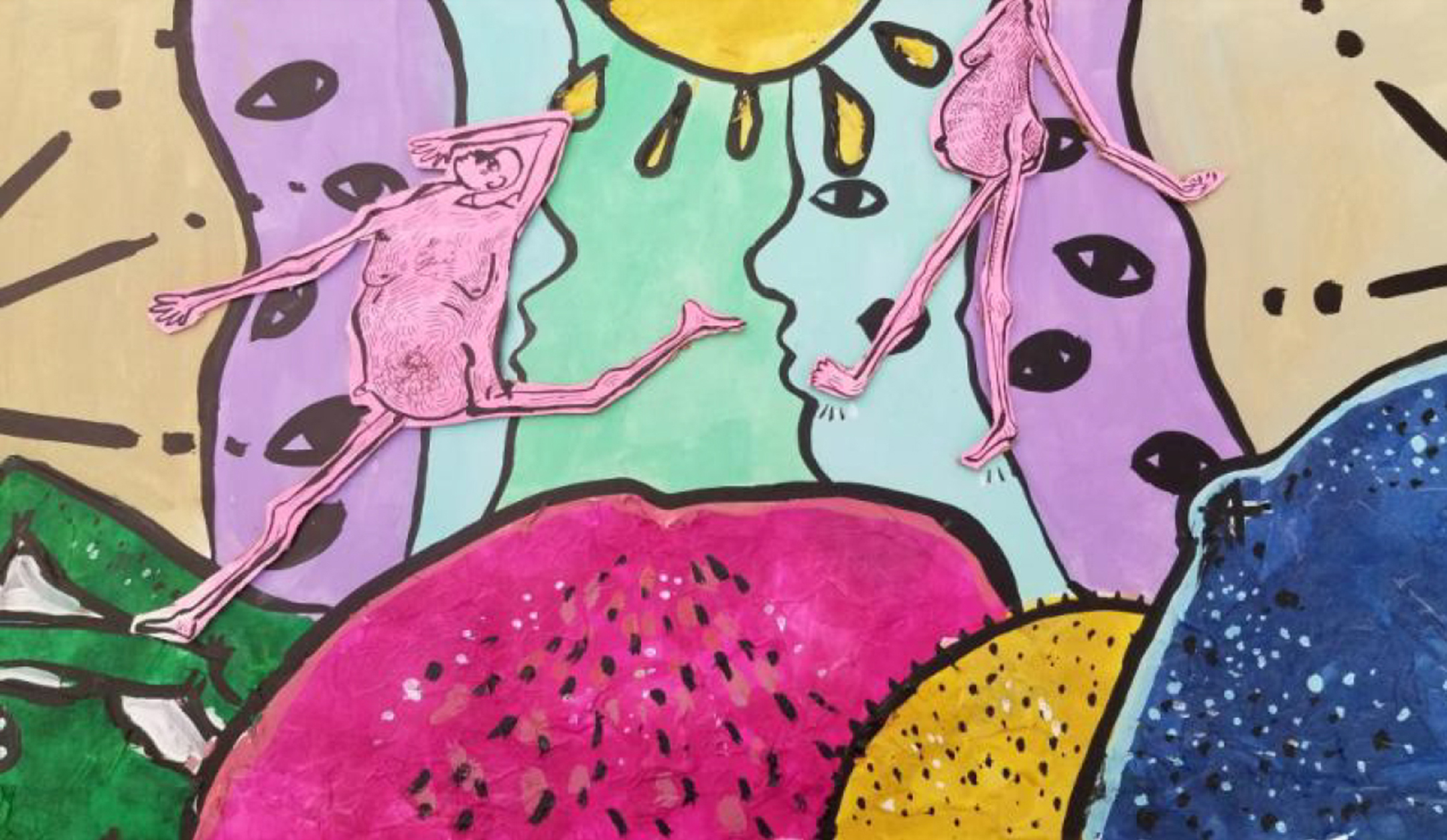 Landscape is made from bodies, the figures and background is meant to show abandon and freedom. 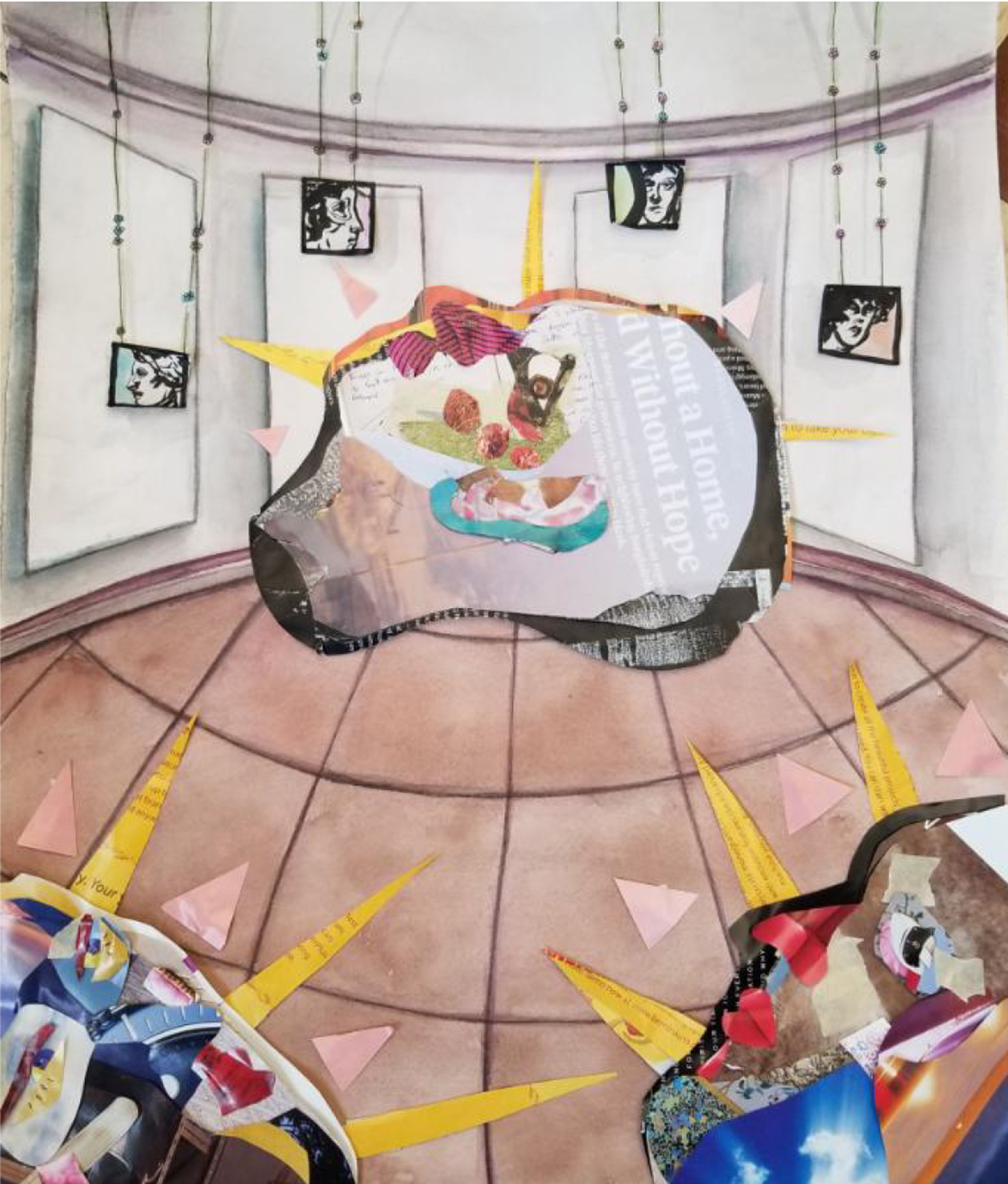