State Fairs, Slackageddon, and Student Journalists: Five Things That Made Us Smarter This Week

From how we work to how we play, we learned a lot over the last seven days 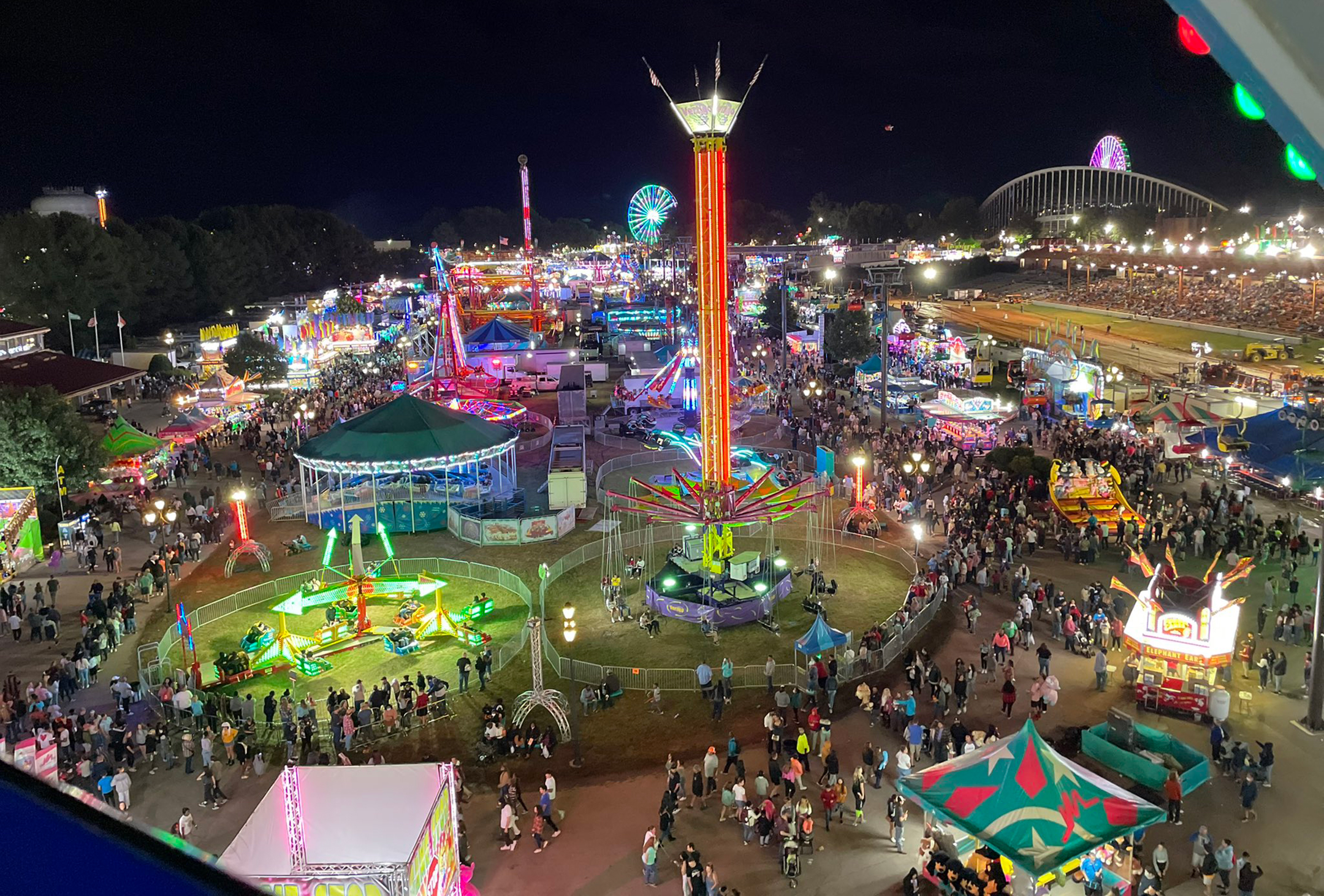 A view of the North Carolina State Fair from the top of its Ferris wheel. It's no Coney Island, but this New Yorker is impressed!

Attending the North Carolina State Fair always makes me smarter because it reminds me just how big and strange and marvelously diverse my home state is. As people continue segregating themselves by geography—with zip codes ever more homogenized by wealth, race, education level, and much else—state fairs remain a glorious mashup of urban and rural, rich and poor, conservative and liberal, Black, White, Hispanic, Native American, and newly arrived immigrants. Everyone is united by the love of a deep-fried Oreo and a piglet race, and it makes me enormously happy to see thousands of families from all walks of life sharing moments of joy. The fair is also a genuinely educational showcase for agriculture. I love visiting the pavilion where teenage farmers show off their prize-winning goats, cows. and pigs, displayed alongside the state’s largest pumpkin and watermelon of the year. When we visited earlier this week, my kids had a blast watching a display of honeybees under a high-resolution camera; my daughter got to hang out with the firefighters running a booth on fire safety. We toured a school bus to learn about the history of hauling kids to class (including photos of horse-drawn school wagons from the 19th century), watched a skilled artisan working at a loom in the Village of Yesteryear, and climbed aboard a boat that the Wildlife Resources Commission uses to study fish populations. It felt like a half-dozen school field trips rolled into one, topped off with a rollercoaster ride. I am both smarter—and queasier—than I was yesterday. —Eric Johnson 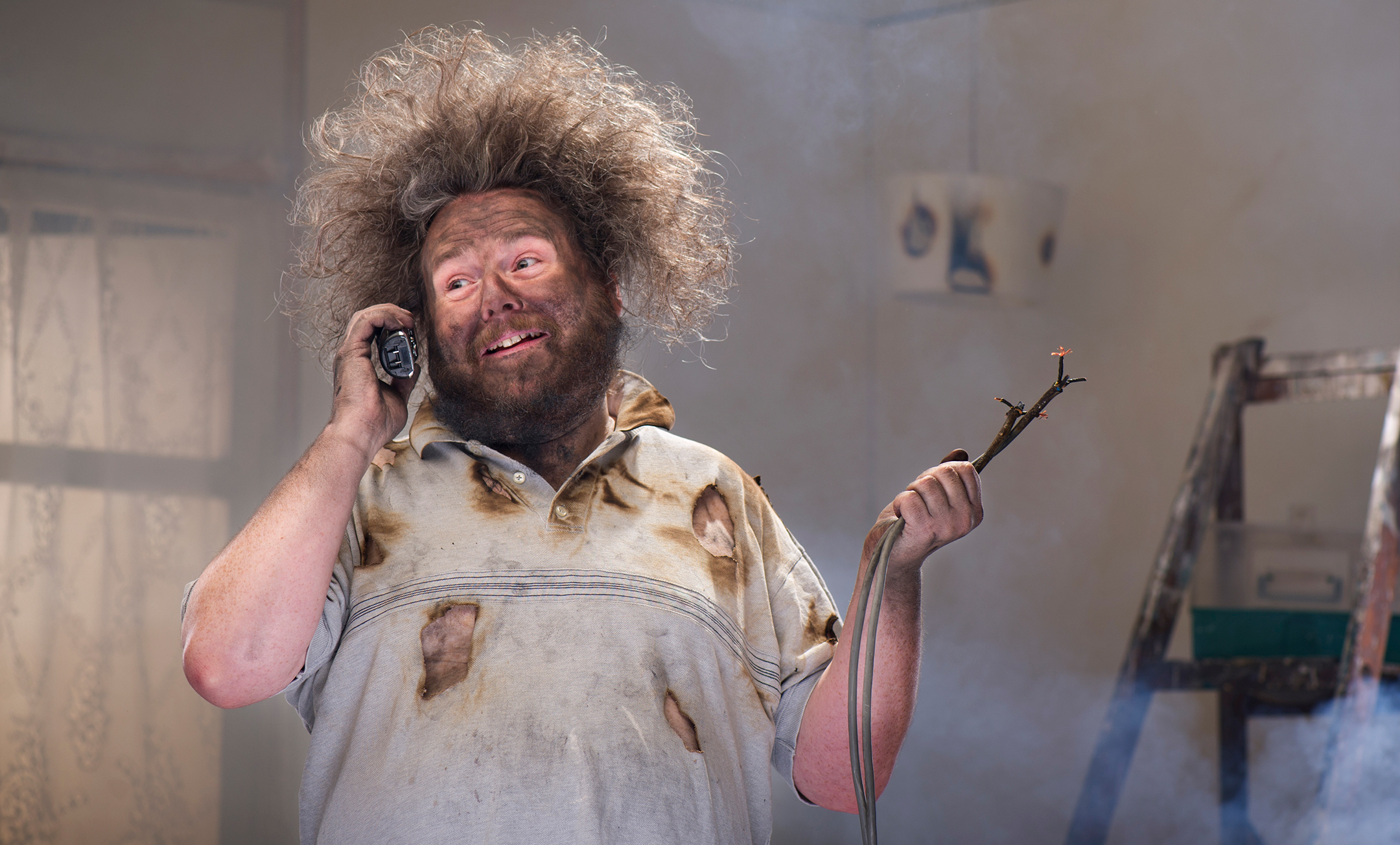 "Yeah I shocked myself. But at least I wasn't bored! Now what do you have to say... Hello? Hello?"

Would you rather: 1) Sit quietly and think, or 2) jolt yourself with electric shocks? Turns out a distressingly large percentage of people—and way more men than women—would rather zap themselves than be totally free of external stimulation. “About 10 years ago, psychologists at the University of Virginia and Harvard University began exploring this question by inviting volunteers to spend time in a room void of all distractions (except for an electric shock device) and to occupy themselves with their thoughts,” writes Rémy Furrer in an article for Psyche. “Their findings, published as a series of studies in 2014, were striking: 67 per cent of the men and 25 per cent of the women opted to intentionally shock themselves, rather than spend a short period of time alone with their thoughts.” It’s hard to imagine those stats have gotten any better in the smartphone-saturated years since those studies.

As a child, I spent quite a bit of time alone with my thoughts. When I wasn’t leaping off the roof onto a trampoline or getting into trouble at school, I would sit and ponder the great wide world of the Texas suburbs where I grew up. Children have plenty of new stuff to wonder about, but apparently the skill of deep thinking gets harder as an adult and you need to practice. Furrer’s research suggests that most of us do a bad job of coming up with enjoyable, substantive things to think about when we’re free of distractions, so we end up feeling angsty or discontent. “Most of us do not have an intuitive sense of how and what to focus on in order to derive the most pleasure from our thinking experience,” Furrer writes. “When conjuring topics, choose ones that are both meaningful and pleasurable (eg, social events and accomplishments).” It seems bizarre to me that humans, whose entire success as a species is based on our outsized thinking ability, would need training in how to successfully occupy our minds. But that’s the takeaway from Furrer’s work: Good thinking, like anything else in life, is a skill that takes practice. “In a world in which the external environment demands so much of our attention, I believe we could all benefit from occasionally retreating inwards to derive both meaning and pleasure from within.” Something to ponder next time your iPhone battery dies. —Stefanie Sanford 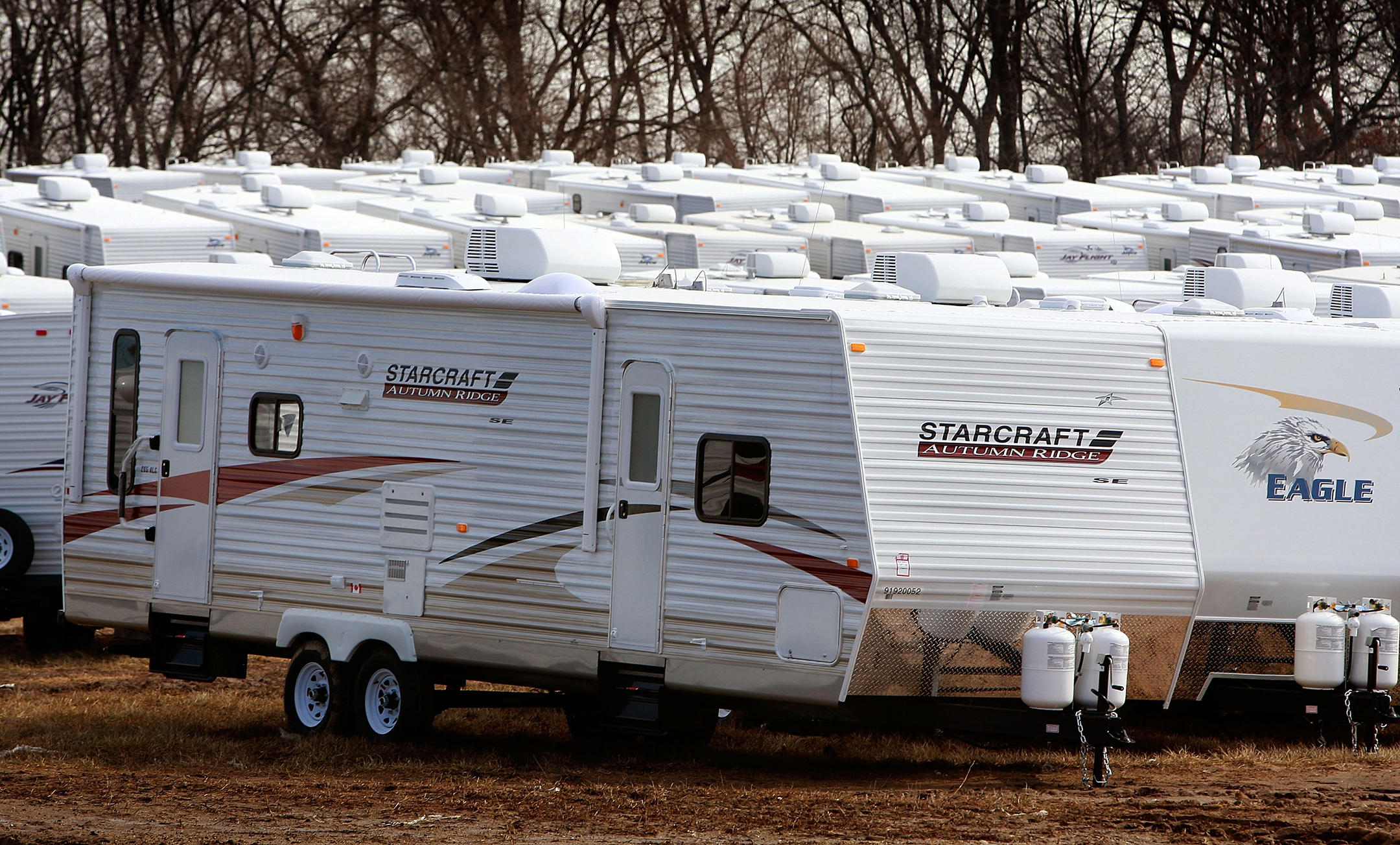 Recreational vehicles sit on the grounds of Jayco, Inc., the country's third largest maker of RVs, February 10, 2009 in Middlebury, Indiana. Back then the town—and the RV industry—was down on its luck. What a difference a decade makes.

I spent the first five years of my life in a town of fewer than 3,000 people, so I was shocked this week when I got a Wall Street Journal alert referencing my home county. The Elkhart-Goshen Metropolitan Statistical Area—in northern Indiana, if you haven't heard of it—topped the Emerging Housing Markets Index this quarter. What is this prestigious award? Realtor.com and the Journal rank the housing markets that provide a strong return on investment and a nice place to live using a series of inputs. Some of their indicators include commute time, wages, unemployment rates, amenities, and property taxes. The biggest city in the area is Elkhart, which has 206,000 residents and is, apparently, the RV Capital of America. That’s not because, as I originally assumed, many people travel there in their RVs; rather it’s because they are the country's leading manufacturer of recreational vehicles. Because the RV industry boomed during the pandemic, wages are higher and unemployment is lower in this small city compared to the national average. The area is attracting people from Chicago, South Bend, and Detroit who are looking to move out of the big city because of the pandemic. This migration is part of a larger trend, as more employees can work remotely and want more space, a lower cost of living, and a different lifestyle. As we reach a new normal, it will be interesting to see if places like Elkhart continue to grow, or, as this article puts it, we'll just see an urban shuffle rather than an urban exodus. —Hannah Van Drie 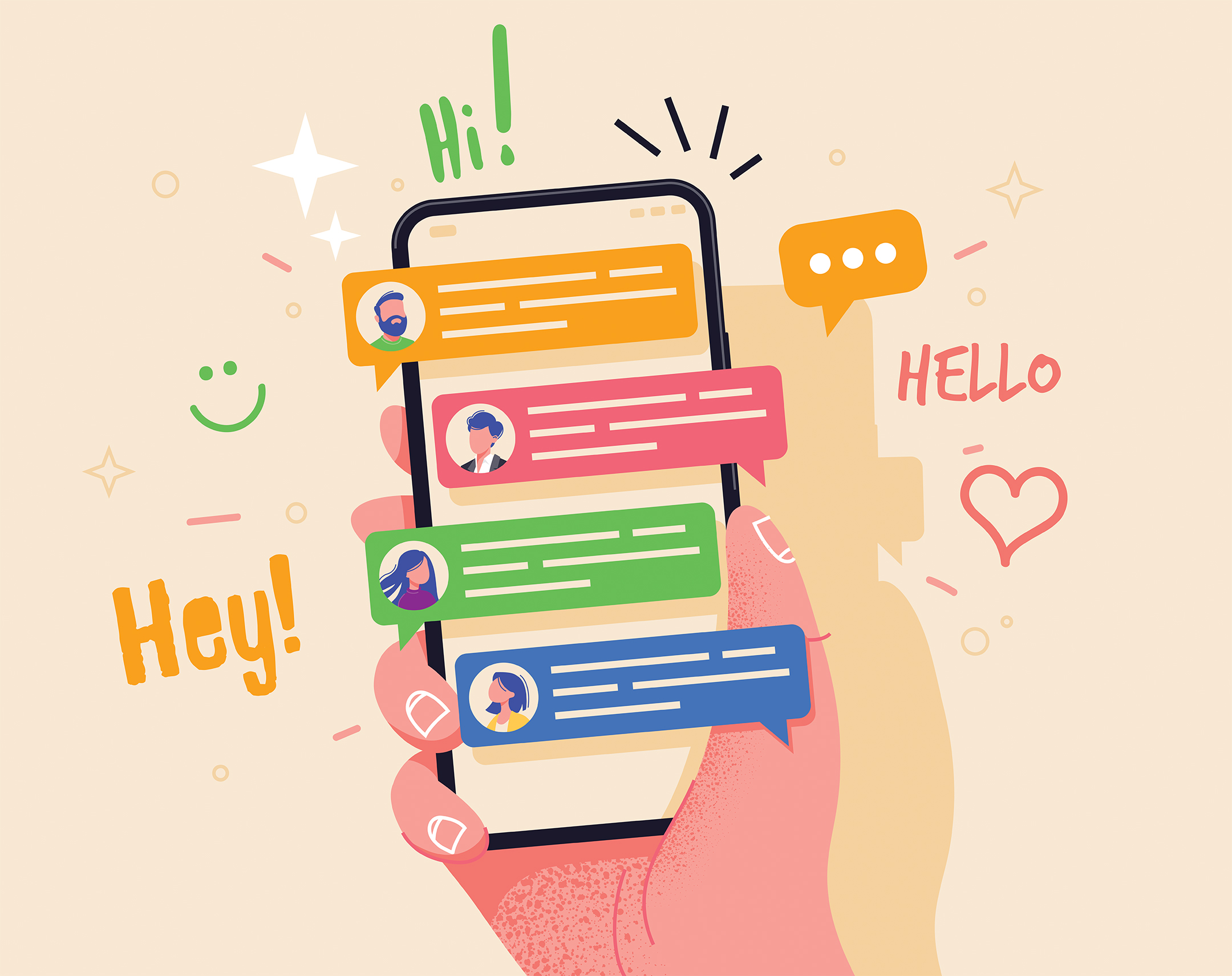 A fairly accurate depiction of what it feels like to use Slack, actually. (But if you're going to have an office messaging platform, Slack > Teams forever.)

Take This Job and Slack It

Are we all destined to be Slackers? In an essay for The Atlantic, Ellen Cushing looks at the way that office chat software Slack has upended the traditional hierarchies in the workplace, becoming a source of empowerment for employees and consternation for managers. “A decade or two ago, identity formation, friendship, meaning-making, and political agitation were much more likely to be the things we did on nights and weekends,” Cushing writes. “Now they’re central to work. If you’re an entry-level grunt, this might be thrilling. If you’re a boss, it can be scary.” That’s because Slack—with its never-ending stream of gossip, jokes, flirting, and (sometimes) actual work—is doing to company cultures what social media has done to the broader world. “On Slack, everyone has the same size megaphone, regardless of hierarchy or chain of command. And between the jokes and the special channels and the spontaneity and the freewheeling way of talking to your colleagues—who are also kind of your friends—it encourages a type of personal expression that is new to the American workplace.”

But not everyone loves this chatty, always-on blending of work and play. Being plugged into an endless scroll of work updates means an evaporation of the boundaries between personal life, making it harder to fully disengage. Employers find their desire to keep workers “invested” (read: online and working all the time) has led to expectations that the office will provide a deeper source of meaning and connection. “When who you are at work and who you are outside of work blur—when work is your paycheck, but also your community and your source of purpose—you treat it a little more like the rest of your life, with all the stakes and all the messiness that implies,” Cushing writes. There’s now a whole genre of commentary loosely organized around the theme that your job is not your life, and shouldn’t be. “Space provides perspective,” counsels Arthur Brooks, in a different Atlantic essay. “Get a break from work and spend time with people you love.” Which means muting those Slack channels every once in a while. —Eric Johnson

Volume 1, Issue 1, Page 1 of the Oglethorpe Echo, published October 9, 1874. Thanks to committed graduates of the University of Georgia's journalism school—and the program's current students—the Echo will keep making noise in Oglethorpe County.

College journalists have always been vital to their communities, a hyperlocal news gathering operation holding to account school administrators, Greek life societies, and students alike. Their importance has only increased as newspapers close, are ingested by hedge funds, or otherwise slash staff and resources as they pivot to the next digital utopia promised by Facebook and Google. In the last year and a half, as more and more Americans find themselves in news deserts, college papers have been on the frontlines of reporting the pandemic and racial justice protests. So it shouldn’t come as a surprise to see a headline about student journalists helping save a threatened local weekly. But, boy, is it uplifting.

When it was announced that the 148-year-old Oglethorpe Echo (what a name!) in Oglethorpe County, Georgia, would cease publication, resident Dink NeSmith, the co-owner of Community Newspapers, Inc. and a graduate of Grady College of Journalism and Mass Communication at the University of Georgia, sprang into action, creating a non-profit organization, The Oglethorpe Echo Legacy Inc., to save the paper. And integral to keeping it running will be Grady College journalism students. “For the first few months, a team of seven paid student interns will work with [fellow alum and new Echo managing editor Andy] Johnston and NeSmith to fulfill a number of roles from city and county government reporters to sportswriters, copy editors and photojournalists,” Sarah Freeman writes. “Starting next semester, the paper will be staffed by up to 20 senior journalism students taking a capstone journalism class, similar to Grady Newsource for broadcast journalism.”

First, hooray for paid journalism internships! And, second, this experience will be as transformative for these students as Oglethorpe County. My best experiences in j-school were getting out into the community and reporting. I can’t imagine what I would’ve done if being in a newsroom was part of my day-to-day life. I’m supremely jealous of the young people who get into the Echo newsroom. But perhaps more importantly, these young journalists are doing essential work for a population that was on the precipice of becoming a statistic. “This is a great opportunity for the students where they will get practical, hands-on experience, but it also helps the community,” Johnston said. “We don’t want this paper to die and become a news desert where people don’t have a way to know what’s going on in their own community.” Of course student journalists would lead that effort. Sometimes it feels like no one else is up to the task. —Dante A. Ciampaglia