“Silver Bullets Are Only Good For Werewolves”

After three decades in education, Southern Regional Education Board president Stephen Pruitt knows there are no quick fixes when creating pathways and improving outcomes for America’s students

On Stephen Pruitt’s desk at the Southern Regional Education Board is a white cut-out nameplate made on a plasma welder. It was a gift from a welding student at Henderson County High School, in Henderson, Kentucky, which Pruitt visited during his tenure as the state’s education commissioner. The student showed Pruitt how he’d made the nameplate using advanced math and coding to program the machine to cut out the letters.

The nameplate is a unique memento. But it also serves as a reminder of why the SREB president has spent the better part of a 30-year career focused on educating students and preparing them for the workforce of tomorrow.

“I told him, ‘I bet your math teachers love you,’ and he said, ‘Oh, I hate math,’” Pruitt tells The Elective. “That’s when it clicked for me. We’re teaching subject matter as if that’s the only thing that matters. Then, we’re teaching CTE [career and technical education] as skills. You need to teach those things together if we really want students to be successful in this fourth Industrial Revolution.”

Transforming CTE—and how high school connects to postsecondary education of all types—has never been more urgent for Pruitt. A former science teacher in his native Georgia and state education commissioner in Kentucky, he has led the SREB since July 2018. The Atlanta-based interstate compact works across 16 states in the South to improve public education from early childhood through the workforce.

More than 33 million workers in the SREB region have a high school diploma or less, according to a recent SREB report. That makes them more vulnerable to layoffs and getting stuck in low-wage jobs, especially after the pandemic hastened automation and job advancement. Worse, the pipeline isn’t getting stronger. SREB’s latest data on higher education in the region shows covid-19’s toll on college going. Enrollment at two-year colleges fell about 7% in SREB states between 2014 and 2019 and at an even higher rate nationwide, a decline that’s expected to persist as the nation exits the pandemic.

For Pruitt, solving these problems is his life’s work. And it comes down to making what’s traditionally taught in high school more relevant and intertwined. The goal is to create a unified system of education and workforce, using data, evidence, and partnerships to drive policy solutions.

The Elective spoke with Pruitt about this effort, his work helming the SREB, and his commitment in the field of education. 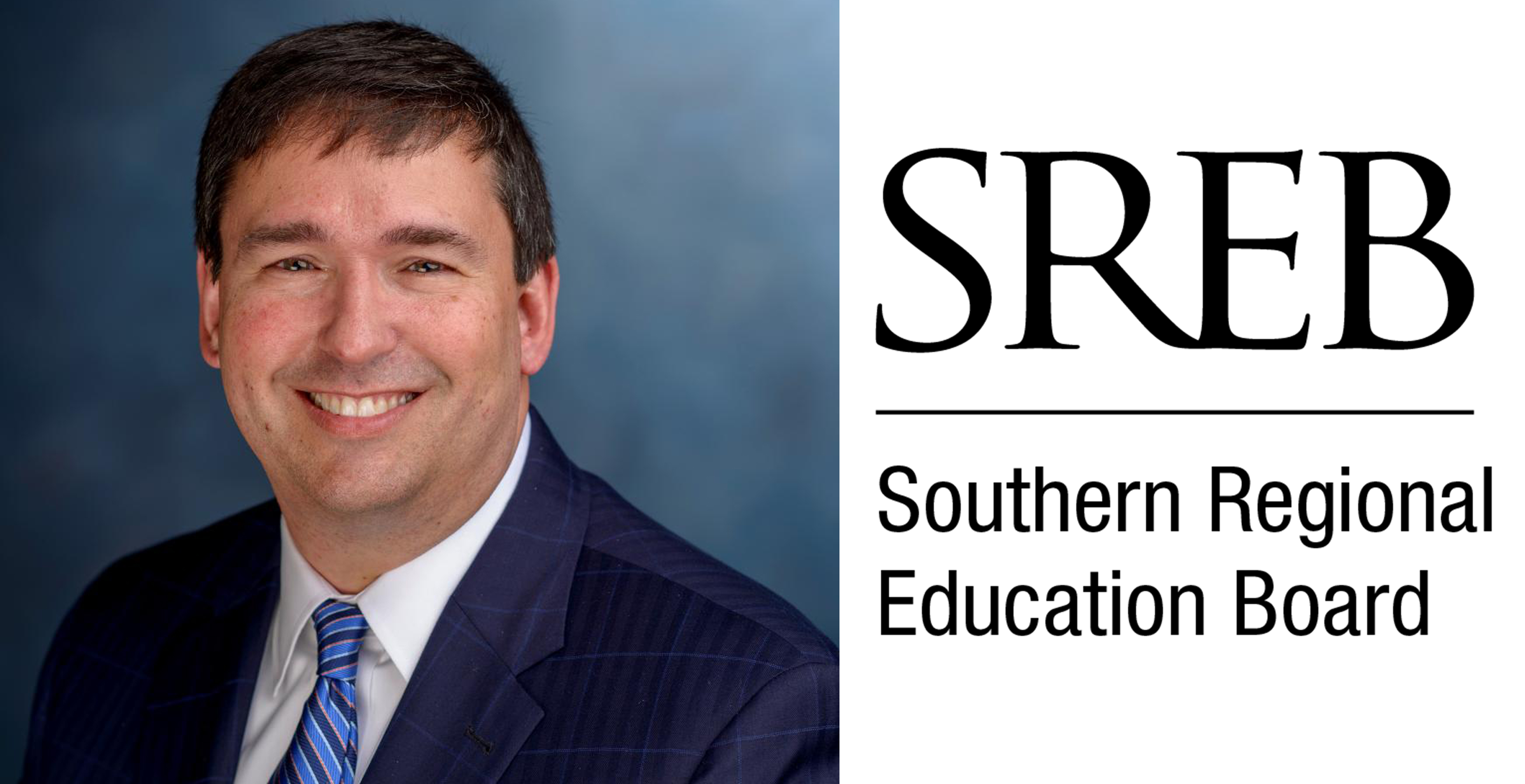 Over the years you have been a teacher, administrator, commissioner, and now an interstate compact education leader. Where does your passion and deep commitment for education stem from?

Did your hometown have a college-going culture? Did you always know you were going to college?

I came from a rural area of Georgia; there were no red lights in Talmo. We were bused into Jefferson City Schools under a desegregation order. I was a “county kid.” We had no AP classes. But at my house, with my mother and grandmother trained as teachers and my father a college graduate, there was never a question we were going to college.

What did your guidance counselor say?

She said maybe college wasn’t the best thing for me. I felt there was a lot of implicit bias because I was a county kid. I’d love to be able to give her my business card now.

Drawing on your experience growing up, how can we think about expanding opportunities for students, particularly around advanced coursework? A lot of people say virtual learning is a silver bullet.

Silver bullets are only good for werewolves. There are more rural students in the U.S. than there are students in at least the nation’s largest 75 districts combined. And rural districts sometimes have less capacity to offer advanced courses or career pathways. We need a specific strategy for building more opportunity in rural schools and these areas. That’s the first step. 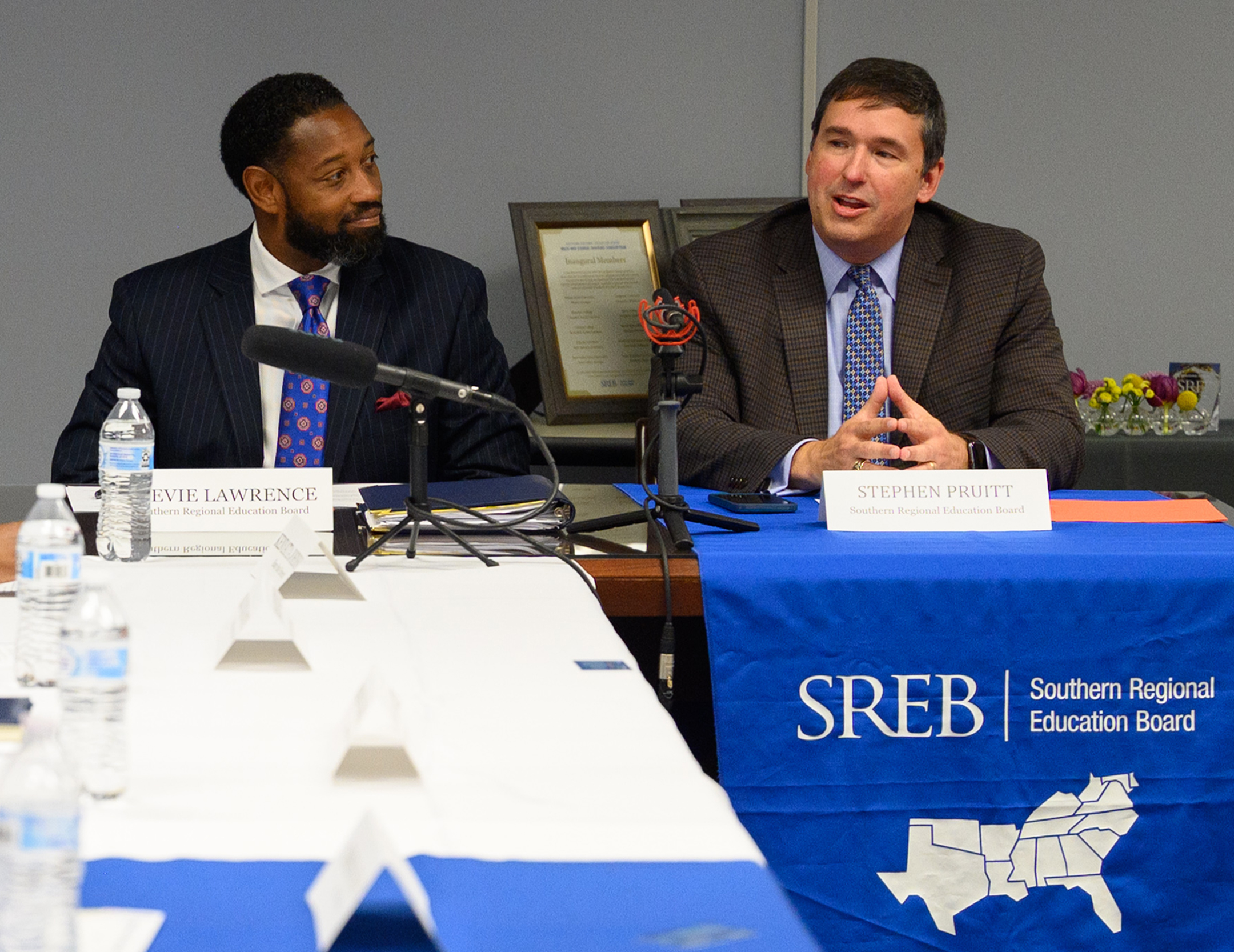 SREB president Stephen Pruitt, right, meets with HBCU leaders from across the South in May 2022. SREB Vice President for Postsecondary Education Stevie Lawrence sits to the left of Pruitt.

SREB just put out its Fact Book on Higher Education, showing college enrollment is declining. There are similar headlines across the country. How alarmed are you? And is the solution to improve college-going or better prepare kids to go straight to the workforce or both?

All of it. Career and technical education is, and should be, about careers not just skills. We’ve got to have strong academic content that incorporates those skills, or people cannot progress through their careers and lives. This will be key if we want people to be able to progress through a career and be lifelong learners in a way that gives them control of their own careers.

You can learn those skills and then get a job, but can you move on when that job ends? I can make a widget, but I can’t have a career unless I have additional knowledge and can adapt to change.

We’ve got to expand the definition of college and recognize that postsecondary opportunities are a range of options. We must recognize career and technical colleges and four-year universities are the engines of a strong economy and workforce. And we must create pathways from high school and technical college all the way through to graduate-level work.

Look at a career pathway we helped state and local leaders put together in Georgia. In this pathway, students can take dual enrollment and graduate from high school as a certified nursing assistant. They can go to work or go to community college, where they can major in nursing and leave as a licensed practical nurse. They can then go to a four-year college and get a bachelor of science in nursing. This is about building a system that leads to a career, versus only taking a bunch of classes that lead only to a specific job.

And then we can do more. We can leverage the capabilities of the College Board, for example, to help more students find opportunities such as AP courses and take other steps to lower their college debt.

How do you scale what you did in Georgia to other places?

We have to make sure there aren’t state policy barriers. And the people implementing any initiative need support.

There’s a difference between building stakeholders and shareholders. You need to build shareholders who work collaboratively and become interested in their own part of the work. In Georgia, we had Wellstar Health System at the table as our employer partner along with state K–12, postsecondary education, and regulatory agency leaders, institution and school district leaders, and teachers. 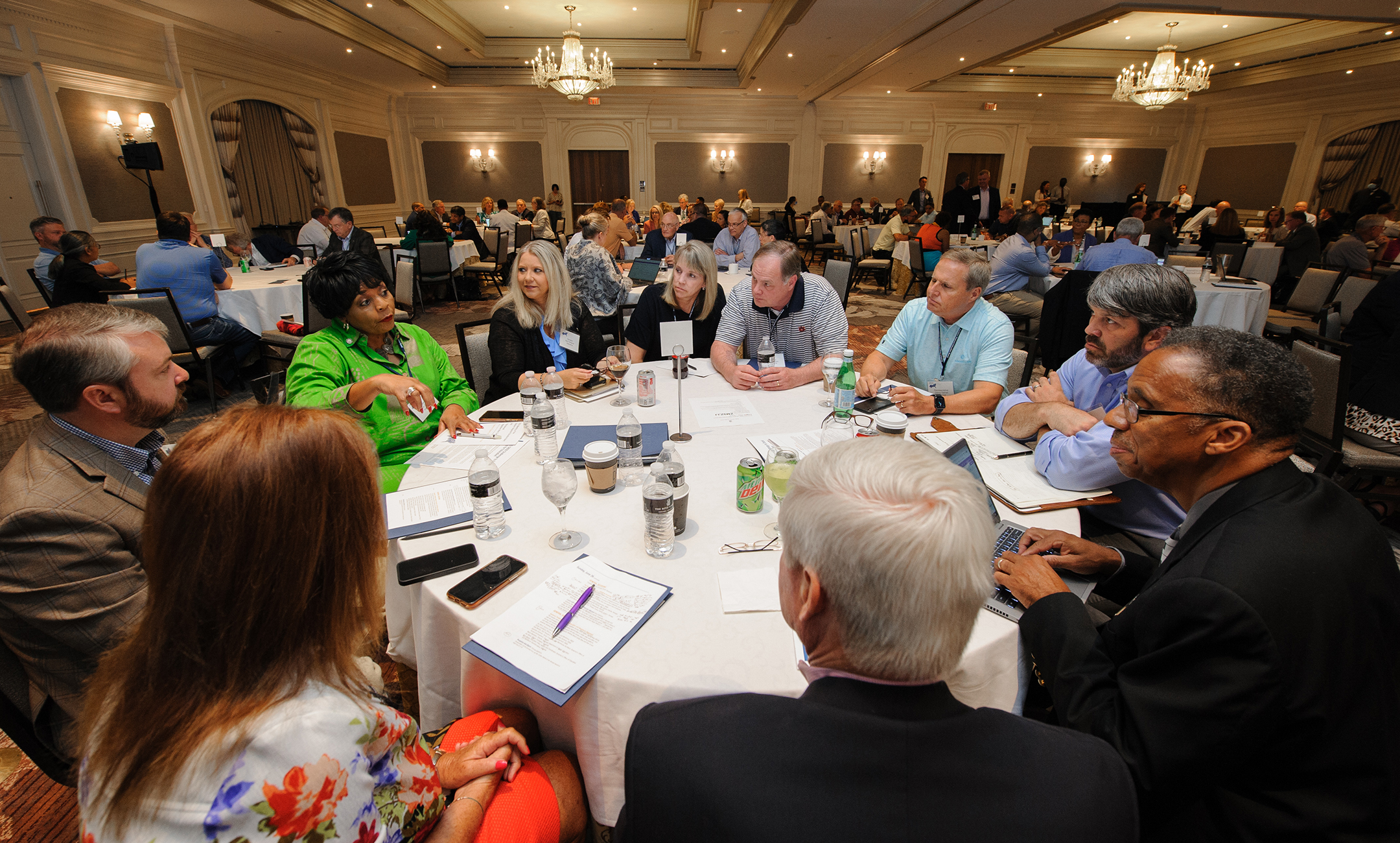 Attendees in a discussion during the 2022 SREB annual meeting, held in Atlanta on June 26.

How do you get those employers and shareholders to the table?

The number one message is we have to stop thinking about separate systems—K­–12 schools, community colleges, and four-year institutions—and start thinking about a system of education that leads to the workforce. When we have multiple systems, they compete for resources. The systems need to learn how to talk to one another. They all have different languages, priorities, and acronyms. It is a mind shift. It is about building a system without giving up the identities of each level of education.

Does polarization in today’s policy and political world, which hasn’t spared education, make your job harder?

You keep hearing that we have to fix this now. There is no now. It’s going to take time to fix our long-term challenges. Education is a game of first downs. Mississippi didn’t see large gains in [National Assessment of Educational Progress] reading scores overnight. It started in 1998 with dyslexia legislation.

Where do you think SREB has made the biggest impact during your tenure?

We do three things really well: publish and gather research, convene people, and support state actions. Our Teacher Compensation Dashboard compiles data that helped legislators in states such as Mississippi as they enacted pay raises for teachers. The credit goes to the legislators, governor, and state superintendent, but we are supporting them with data to make sound decisions. Our work with educators each year on professional development and coaching is tremendous. We’re also very excited about taking on a national leadership role in supporting instructional coaches, or teachers who work with other teachers. 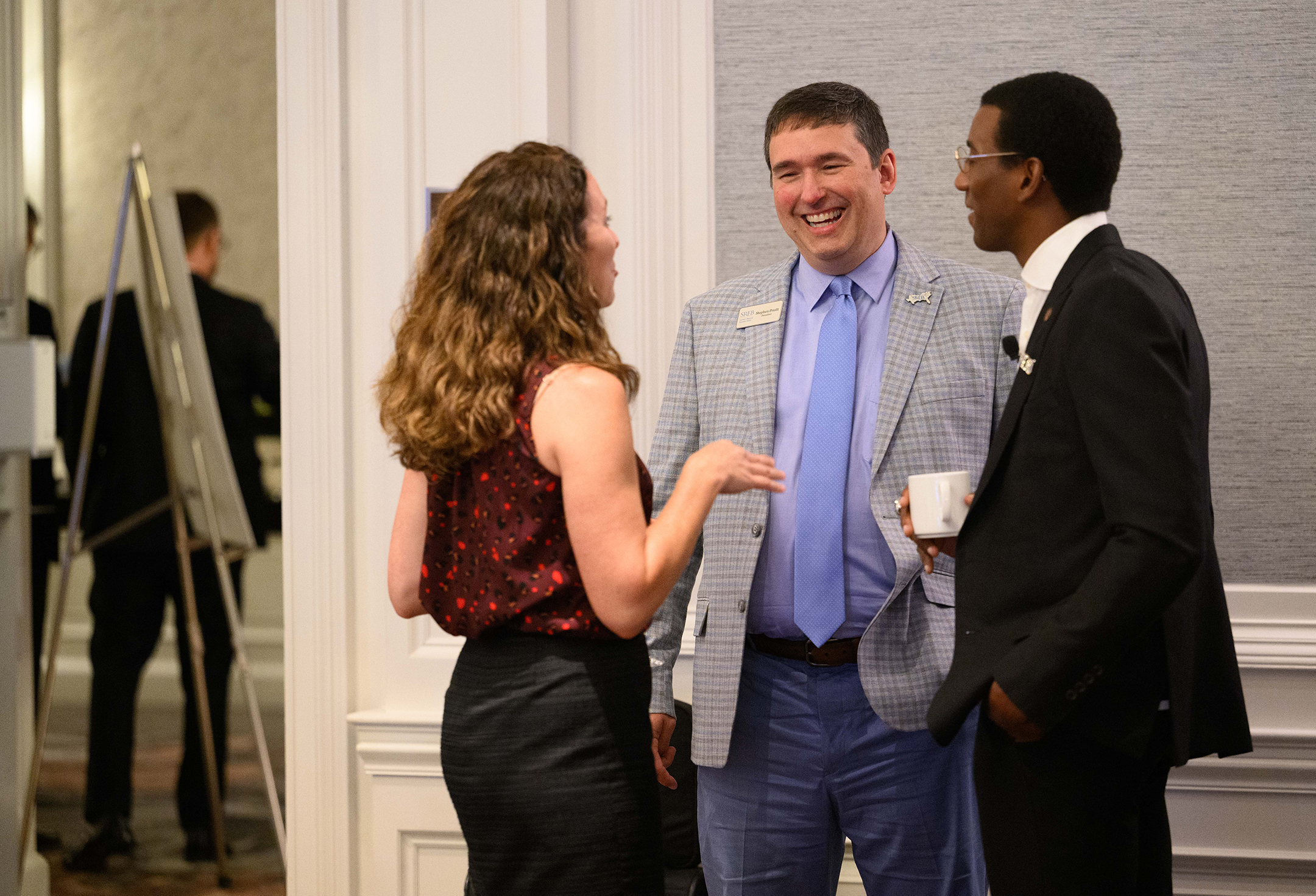 SREB president Stephen Pruitt gathers with leaders from across the South at the SREB annual meeting in Atlanta on June 26, 2022.

How can SREB make a difference in the long-term?

SREB has a very distinctive role. We are an interstate compact of 16 states. We are actually written into the law in our 16 states. In the late 1930s, President Franklin Roosevelt said the South was the biggest economic liability in the country. In 1948, Congress created us to help our states take action. We were the first education compact in the country.

We’re a metaphorical education bridge. We’re able to be the expert voice that brings the knowledge and research, without an agenda. We help states develop unique solutions to common challenges.

Where do you find the most hope?

I do believe that many states, K–12 schools, and postsecondary institutions are opening up more opportunities for students. I believe in the hope that I hear from our states that they want to move education to be that powerful tool for making lives better.

Alabama, for example, has set specific goals, a north star, about where they want their workforce to be like in the future. There are states that are rethinking how they approach standards and accountability. In Georgia, they are asking what is the portrait of a CTE graduate. There are several states committing themselves to raising the profession of teaching and working toward keeping teachers in the profession and in the classroom.

An Investment in Latino Opportunity