This story from the summer of 1986 goes inside a then-new way of going to school: using a landline telephone and an early desktop computer. It was bulky, but it would pave the way to taking online classes

Online learning, using an ultralight portable laptop or tablet and a reliable high-speed internet connection, is so common in 2020 that it’s noteworthy when it doesn’t happen. But 35 years ago, the idea of bringing groups of students together from different geographic locations to take a class with a teacher who was somewhere else, too, was inconceivable. Personal computers were rare sights in classrooms, the internet was slow and used primarily by university and government researchers, and all of the equipment needed to network classrooms was prohibitively expensive. Taking a class on a computer? Sounds like a plot point in a crazy sci-fi movie!

And yet, that’s how students at five different rural New York schools attended an AP Calculus class, taught by a college professor in yet a different place, in 1986. Reading James Leach’s article about this experiment in distance learning, originally published in the Summer 1986 issue of The College Board Review, is kind of mind bending. Yes, it’s dated—floppy disks are vital to the class succeeding—but it also points to our digital present: Tucker uses a nascent iPad® and Apple Pencil® to answer student questions. Students draw letters that appear on everyone’s monitors, pointing toward touchscreens and tactile computing. Everyone’s routed through a connection handled by AT&T®, which anticipates the kinds of networks that power our smartphones.

We’ve certainly come a long way from that pilot AP Calculus project , but nearly four decades later it still resonates as an experiment in potential and hope—for innovating new ways to learn, and for connecting students in far-flung places with education and opportunity. 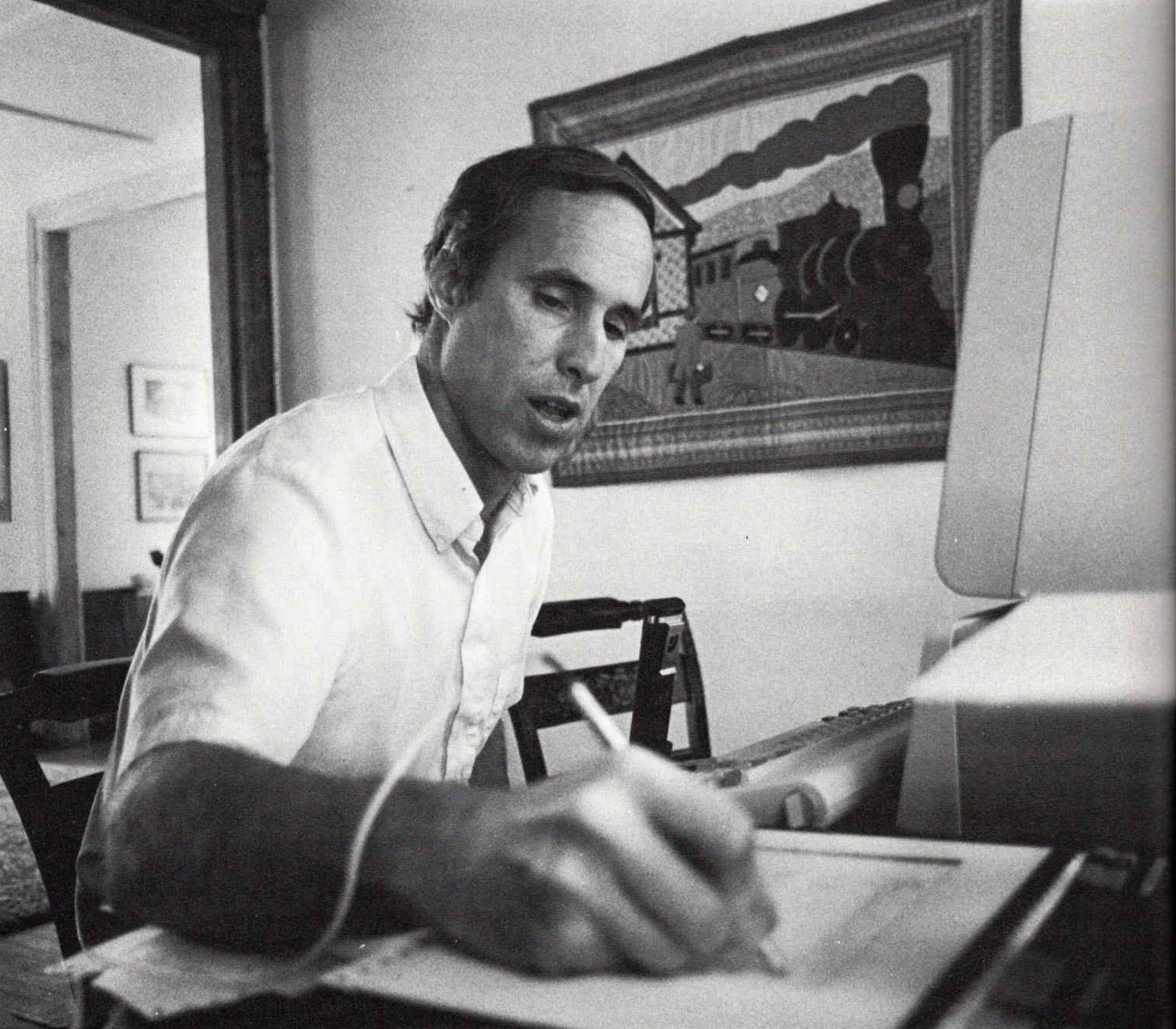 “Hello. Downsville calculus class? I’m transferring you to the bridge now. You’re the first on. I’ll be back in a few minutes.”

Tom Tucker, professor of mathematics at Colgate University, is seated at a small table in front of a picture window just off the dining room in his home in Hamilton, New York. A personal computer, a conference telephone, and an electronic tablet are arrayed on the table in front of him.

“Hello. Mount Upton? This is Mr. Tucker. I’m transferring you now. I’ll be back in a minute.”

High school calculus classes in Afton, Oxford, and Franklin are brought on line, linked to each other and to Tucker’s home via a conference telephone call accomplished through a bridge at AT&T’s facilities in White Plains, New York.

“Okay. We’re all connected. Sign on, Downsville. Downsville, give me a D.” A green, handwritten D takes shape on Tucker’s computer screen. “Give me an F, Franklin.” Students at each school sign on in turn, their letters appearing in different colors on Tucker’s screen. Afton’s large A goes from side to side and from the top to the bottom of the screen, taking in the other four letters and drawing a chuckle from Tucker and laughter from the squawk box.

“Before I get into the lecture, I want to ask you about last week’s homework assignment. For example, one point seven. How did that go, Downsville?”

From the speaker phone: “We didn’t exactly get that one,” says a voice from Downsville.

“There was some difficult algebra in that one,” Tucker says into the microphone. “Let me show you how to simplify that equation.” He turns to the tablet at his right. Using a pen connected by wire to the side of the tablet, he writes out the problem. What he writes on the tablet appears in green on his computer screen, and simultaneously on the computer screens in classrooms in Mount Upton, Afton, Franklin, Oxford, and Downsville. He pushes a button and begins to calculate the equation on the tablet. His calculations appear in red on the computer screens. All the while he is questioning, “What number should I use here, Downsville?” “What’s the limit of f(x) as x approaches 1, Oxford?” 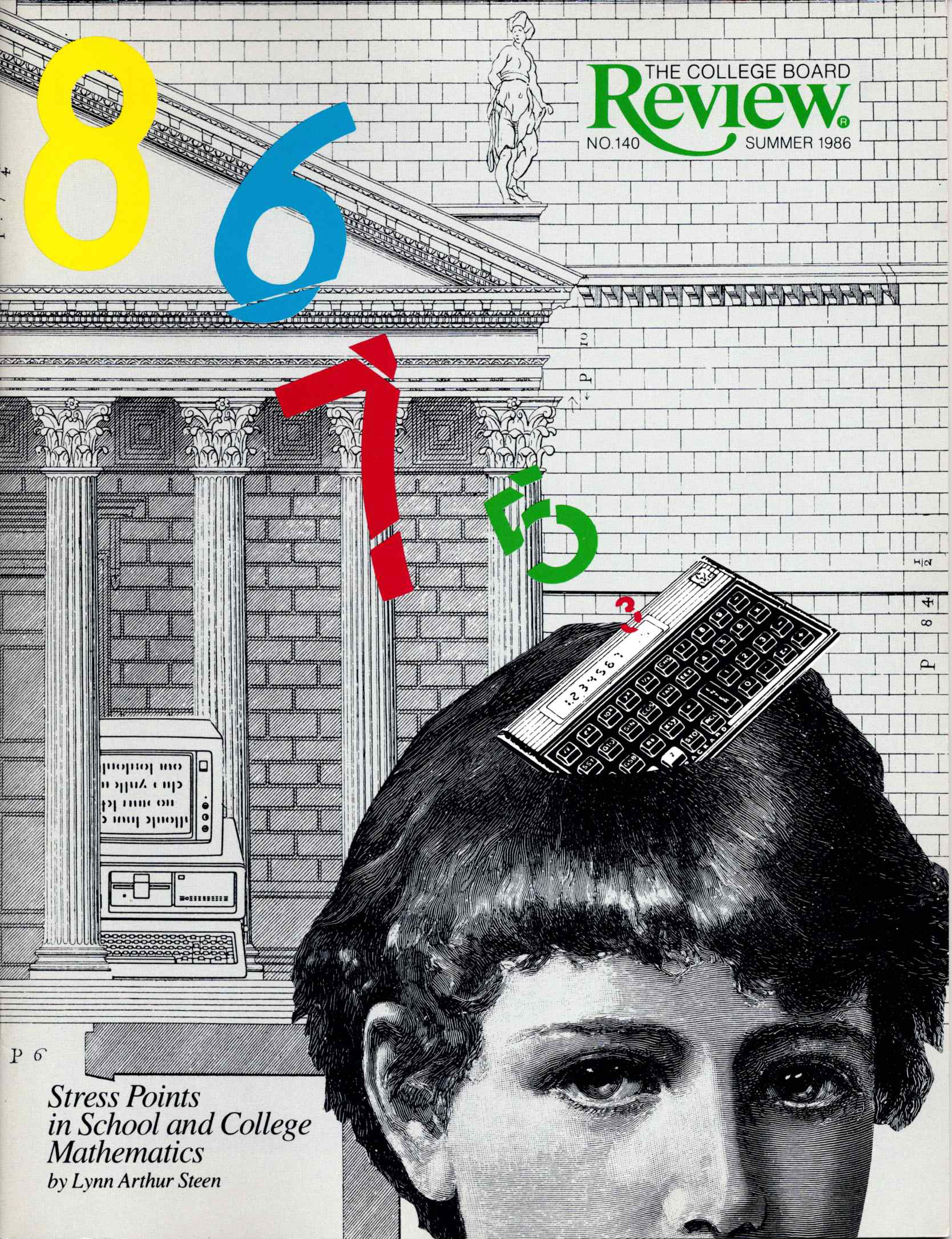 Tucker is teaching Advanced Placement® (AP) Calculus to 16 high school students. The students are located in 5 schools up to 100 miles apart in rural upstate New York. The course, and Tucker, are available to the students because of the computer and phone-line hookup.

Denis Martin is pacing the room behind Tucker. Martin, project coordinator for telecommunications for the Delaware and Chenango Boards of Cooperative Educational Services (BOCES), conceived the computer and telephone system. Tucker, who chairs the Advanced Placement Calculus Committee for the College Entrance Examination Board, designed the course. They believe it is the first effort of its kind to use such a system to teach a class.

Tucker has finished his review of the homework, with an admonition to the students to mail their homework assignments by Tuesday so that he can grade and return the work by the next week’s class. “Let’s turn to today’s lecture. Has everybody loaded the September 24 disk?”

Each week’s lecture and example problems are contained on a magnetic disk—a “floppy disk”—and copies are loaded into the computers at the respective schools. Tucker can turn the “pages” of the lecture from the computer in his home, and the computers in the five schools follow his command.

He begins to work on one of the example problems, using his electronic pen and tablet to calculate over the equation that appears on the screen. “What should I do now? Oxford?” A student in Oxford uses the electronic pen and tablet at her desk to complete the equation. Her calculations appear on all of the computer screens in the system. Words of encouragement from the professor.

“Okay, Franklin, you take the next one.” The writing is red now, appearing on Tucker’s computer screen as a student at Franklin High scratches out an answer.

Later Tucker will explain, “When the system is working right, it’s as though you are teaching a class where every student has access to the blackboard. As soon as one student gets onto the board by placing the pen on his tablet, he has control of the screens here and at the other schools.” Though this class is taking place in six locations, it is as if teacher and students are all seated around one large table, actively participating in the solution to each problem. “It’s the sort of give and take you’d like to have in a classroom,” Tucker says. He is at ease. The students chatter back over the phone as though this is nothing new.

But if Tucker is at ease during the class, the challenge of his assignment emerges in conversation once the phones have been hung up. “We really have 30 class meetings to teach what would normally be taught in 140 class sessions of a typical high school Advanced Placement Calculus course,” he explains. He has faith in the course, and in the students. “In the end, it will be the able kids who make it work,” he says.

Elizabeth Tenaglia of Oxford is one of the able kids. “It might be easier to learn this at college with a teacher in the classroom,” she says. She and her classmates and their teacher, Oxford principal Jim Podraza, find that they are working hard together after class hours. Podraza sees this as a benefit of the course. “The students are learning to rely on themselves, rather than on the teacher. It’s a good exercise. Good preparation for what they can expect in college.”

The 16 students in Tucker’s class will be tested at the end of the year using the same examination that is given to students across the nation who are taking their Advanced Placement Calculus training in the conventional way: meeting five times a week in a classroom with their own teacher on site. They will all take the College Board’s three-hour Advanced Placement Calculus “AB” Exam, and if they score well enough, many will have earned college credit for their work in high school. The rigorous AP Exam will be the acid test. 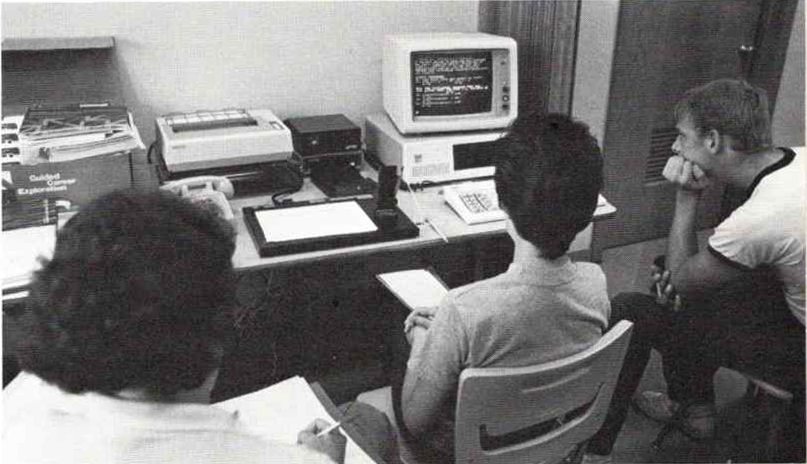 High school students in their classroom, on the other end of the computer hookup connecting them with Professor Tom Tucker's AP Calculus class.

It is nearly 2 p.m. and Tucker is preparing to sign off. He assigns homework. Later in the week, he will be in touch with classes in each of the five schools, individually, by telephone, to review the week’s work during “office hours.”

After hanging up, Tucker and Martin consult. There have been a few bugs in the system today, probably caused by interference on the phone lines. Difficulty with the system becomes a problem only when it takes Tucker and the students out of the flow of their conversations. Today everyone seemed to adapt, Martin and Tucker agree. Martin will fine-tune the system before the next class meeting.

Martin has put the pilot project together with support from the United States Department of Education, the New York State Education Department, and the New York State Legislature and its Commission on Rural Resources. AT&T communications and IBM® are also supporting the pilot effort. The project has special meaning in New York State, where smaller schools are under a mandate from the Board of Regents to make advanced classes available or face consolidation into larger school districts.

“That was the problem,” Martin explains, “and we started from that point to determine what suited our needs best. There are a number of places using teleconferencing of one sort or another. Generally, they start with a gee-whiz machine and then see how it can be adapted to their needs. We began by talking with superintendents and students, and then went out to develop a system that would serve their purposes.”

The system incorporates IBM personal computers, conference telephone connections, modems that transmit computer signals over the phone lines, Optel graphics that allow the users to “write” on their computer screens, and, for this class, a sophisticated package of calculus software used for homework assignments.

The investment in hardware (computer and related equipment) is about $8,000 for each location. It costs another $200 per class hour to arrange the conference call and pay long distance charges. The hardware is a fixed cost. Once in place, it could be used for other teleconference classes. The $200 phone charges are a fraction of the cost of other teleconferencing and videoconferencing services. Martin envisions a network of teleconference rooms that might one day be used to offer a full day’s schedule of long-distance classes in a variety of subjects at rural schools.

He acknowledges that being able to offer a college professor’s services to rural schools made the pilot project especially attractive. “School boards are becoming increasingly interested, especially when we have someone of Tom’s caliber teaching,” he says. Podraza concurs. “It’s available and affordable,” he says. And the reason Martin was able to enlist Tucker, of course, is that, if the professor doesn’t have to leave town, he can easily fit his high school classes into his regular Colgate teaching load.

“Believe me,” Tucker says, “there are a lot of people watching this project.”

Computers: The New Kick in the Schools