Test-Tube Coffee, Green-Eyed Clickbait, and Acid-Trip Animators: Five Things That Made Us Smarter This Week

From how we drink to what we see, we learned a lot over the last seven days

Delicious cup of petri dish java, anyone? Coffee is a delicate crop, with the best varietals growing in mountainous microclimates near the equator. As climate change shifts patterns of rain and temperature in those regions and the global consumption continues rising, Finnish scientists are hoping to expand coffee’s range to laboratories. “Coffee plant cells were cultured in the lab, and then placed in bioreactors filled with nutrient medium to grow,” reports Fast Company. “The process results in an off-white biomass that’s dried into a powder, then roasted to a dark brown color that looks like coffee grounds. The scientists recently brewed their first cups of the lab-grown coffee, which they say tastes and smells like ordinary coffee.”

I’m trying to imagine the tasting notes on the side of that bag. One of my favorite coffee roasters, Red Rooster in Floyd, Virginia, uses descriptions like “balanced and mellow with an orange zest aroma and light acidity, and notes of caramelized sugar, rough puff pastry and fresh apricot.” Or “This coffee packs a lot of berry punch. Strawberry dominates with supporting notes of blackberry, raspberry, and rose. Expect plenty of chocolate and a creamy mouthfeel.” Hard to imagine similarly soaring prose for a lab coffee that doesn’t involve any beans. Maybe something like, “Precise and methodical, with a hint of sterilized pipette and a well engineered, modernist finish.” (I’ve always wanted to ghostwrite the tasting notes on pretentious coffee!) Anyway, the Finnish effort is part of the growing field of research into cultured food, with a vision of growing everything from saffron to steaks without having to cultivate actual plants and animals. The Finns are even tinkering around with a countertop bioreactor that would allow you to grow your own fruit and vegetable cells in something that looks like a next-gen Apple HomePod. I’ll bet a breakfast of lingonberry puree goes great with the petri-coffee. —Eric Johnson 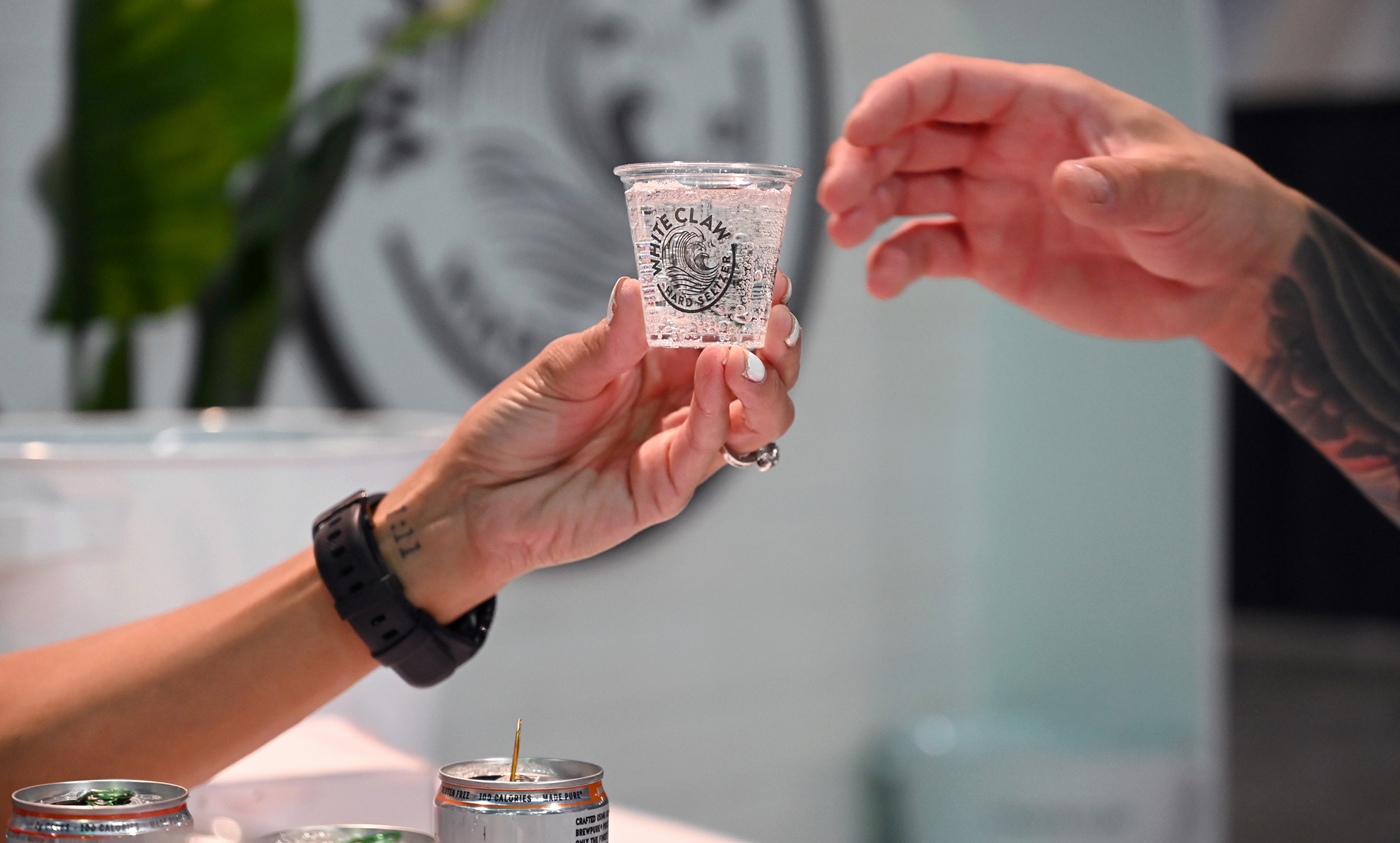 Hard seltzer? Please. Kicking back after a hard day at the office calls for a real drink. Like Zima.

To Beer or Not to Beer?

While summer is officially over, here in Washington D.C. we will hopefully have a few more weeks of nice weather, perfect for grilling and drinking a hard seltzer. Yes, a hard seltzer, and not a beer, as this week I learned that White Claw and its boozy-fizzy kin have raced past craft beer in the hearts, mouths, and wallets of American drinkers—achieving in five years a market share its fermented competitor took 40 years to reach. The Washington Post outlines seltzer's ascent to the top and compares it to the emergence of German lager as the drink of choice in the United States in the mid-1800s. American per capita consumption of beer doubled between 1855 and 1875, then doubled again by 1890," the Post’s Brian Alberts writes. That’s not unlike the rapid growth in consumption of seltzer we're seeing today. And, in fact, the perception around light beer back then is similar to hard seltzer’s hard sell now. Both have been marketed as healthier options than other alcoholic beverages; it was so much a part of the pitch in the 1800s that some claimed lager could cure cholera. So far, all White Claw and its ilk have going for it is an emphasis on low calorie counts. There is one other notable difference between the rise of light beer and the rise of hard seltzer, though. Lager was brought to the U.S. by German immigrants and became a cultural touchpoint for emigre enclaves. Drinking the beverage represented work-life balance and the importance of community. The cultural significance of hard seltzer—let’s just say it’s still developing. But at the rate we're guzzling it, I'm sure it will establish its own place in the history books soon. —Hannah Van Drie 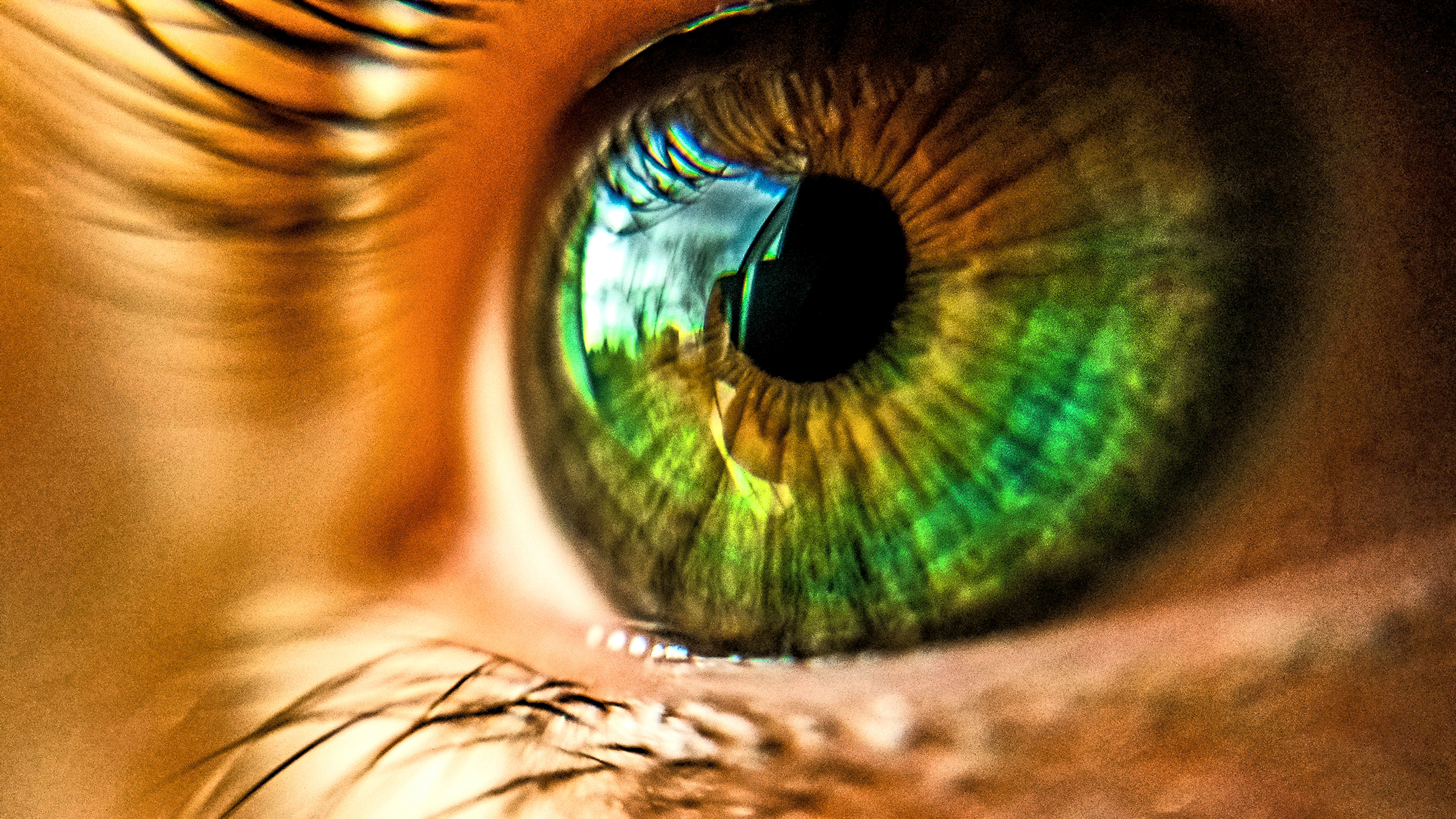 You want some real ocular clickbait? Let's blue-dress this picture of a green eye and say it's purple.

There’s a certain kind of online writing—the kind you find on TheList.com—that reads like a started-too-late college essay. “Green eyes have become a mainstay in literature, music, paintings, and photographs,” begins the 2,500-word treatise “The Truth About Green Eyes.” “Yes, green eyes are indeed captivating. Perhaps because of their mystique, though, legends and outright misconceptions about this eye color abound.” The editor in me wants to pull out the red pen and strike through that pretentious premise, but author Brittany Brolley actually manages to deliver on this bit of personal clickbait about my eye color (and my mom’s and her mom’s). Did you know green is the rarest eye color? Or that Rayleigh scattering, caused by the way light passes through the eye, affects the color we perceive in someone else’s eyes? Or that babies are born with either blue or grey eyes, and don’t take on a permanent eye color until they’re exposed to sunlight for a few months? “You should begin to have an idea of your child's eye color at around the six-month mark,” Brolley writes. “If, after a year, your child has green peepers, you can be confident that they're there to stay.”

And you can get ready for someone who’s “creative and a bit devious,” according to TheList.com’s rigorous analysis of what random people on the internet have said about green-eyed personality traits. Shakespeare wrote unkind things about his green-eyed characters, but the modern world perceives the verdantly apertured to be sexier, smarter, and more inventive. Not a bad roster, as stereotypes go. All of this made me think about the famous blue-eyes/brown-eyes experiment on how easily humans can be induced to separate and assign value to one another based on the flimsiest distinctions, when we’re given the right prompts. We are pattern-seeking creatures, and we try hard to make sense of the world through categories even when those categories aren’t meaningful. Tall people get paid more. Attractive women are perceived as less competent. Left-handed people are seen as independent thinkers. We gravitate toward these things because it saves us the time and energy of having to think about people as individuals, quirky and unpredictable and impossible to really know without actually getting to know them. So while it’s fun to think light-eyed folks can hold their liquor better than everyone else, I’m withholding judgment until we’ve actually shared a few glasses. —Stefanie Sanford 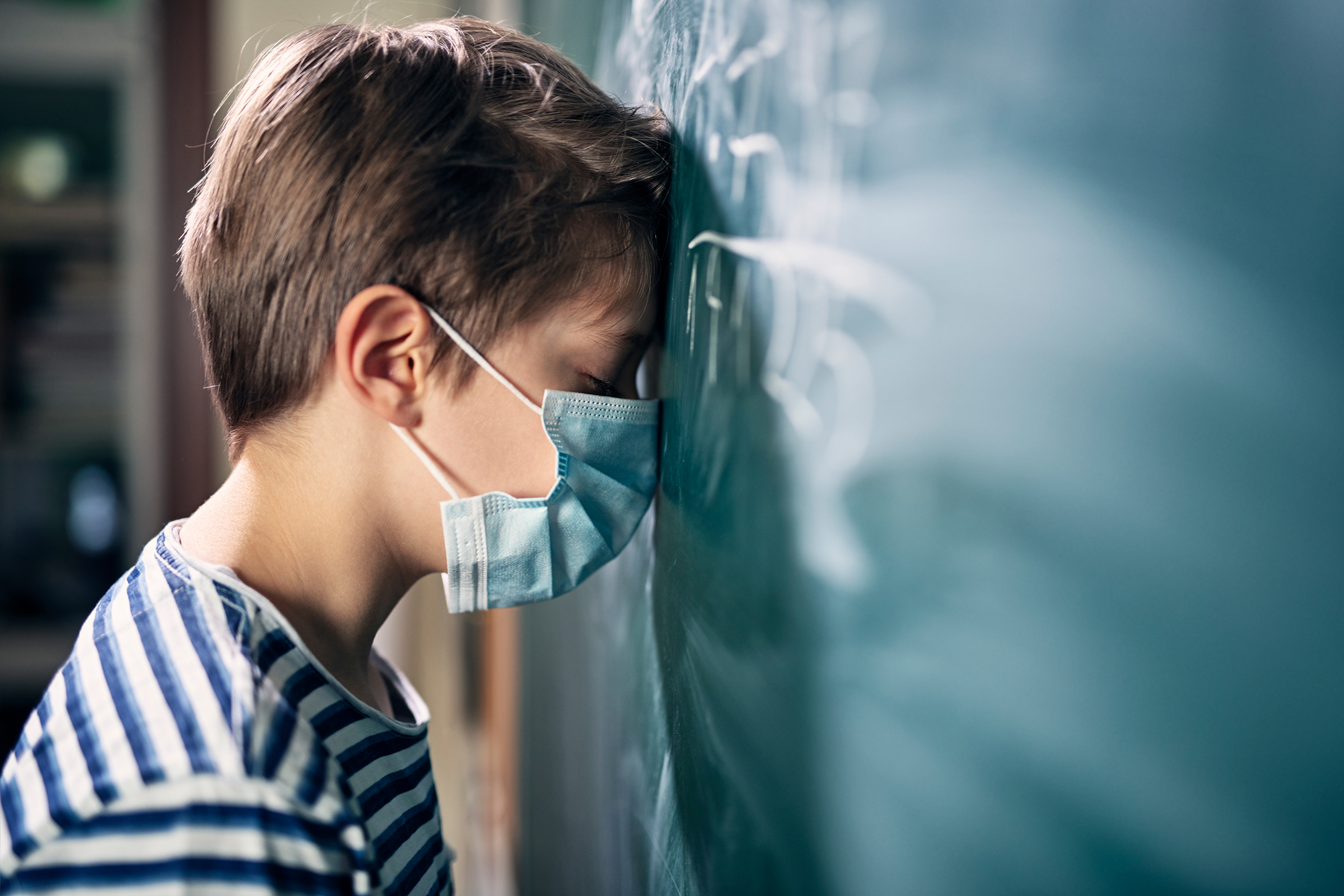 Depression, anxiety, and self-harm, on the rise among young people for years thanks to a range of causes from social media to economic hardship, have only worsened during the pandemic.

The emotional toll from the covid-19 pandemic is very much on the minds of school leaders across the country, and some districts are rolling out automated surveillance tools to identify at-risk students. “School districts use artificial intelligence software that can scan student communications and web searches on school-issued devices—and even devices that are logged in via school networks—for signs of suicidal ideation, violence against fellow students, bullying and more,” reports Julie Jargon in the Wall Street Journal. “Included in the scans are emails and chats between friends, as well as student musings composed in Google Docs or Microsoft Word. When the AI recognizes certain key phrases, these systems typically send an alert to school administrators and counselors, who then determine whether an intervention with the student and parents is warranted.”

The growing use of these AI-powered systems speaks to the sense of crisis that parents and administrators feel about student mental health. Depression, anxiety, and self-harm have been on the rise among young people for years, with researchers pointing to causes that range from social media to economic pressure. Everyone seems to agree that early intervention, which these communication-scanning technologies are meant to provide, is more effective than waiting for a full-blown crisis. But what’s always striking about these high-tech solutions is that they depend on a very low-tech followup: sustained, supportive human connection. Identifying students in need is important, but so is having the counselors, trained teachers, and caring school environment that makes recovery possible. “Kids usually feel relieved to have someone to talk to,” Jargon writes. Adults, too. —Eric Johnson

If you’re thinking about suicide, are worried about a friend or loved one, or would like emotional support, call the free National Suicide Prevention Lifeline (1-800-273-8255) or 911. 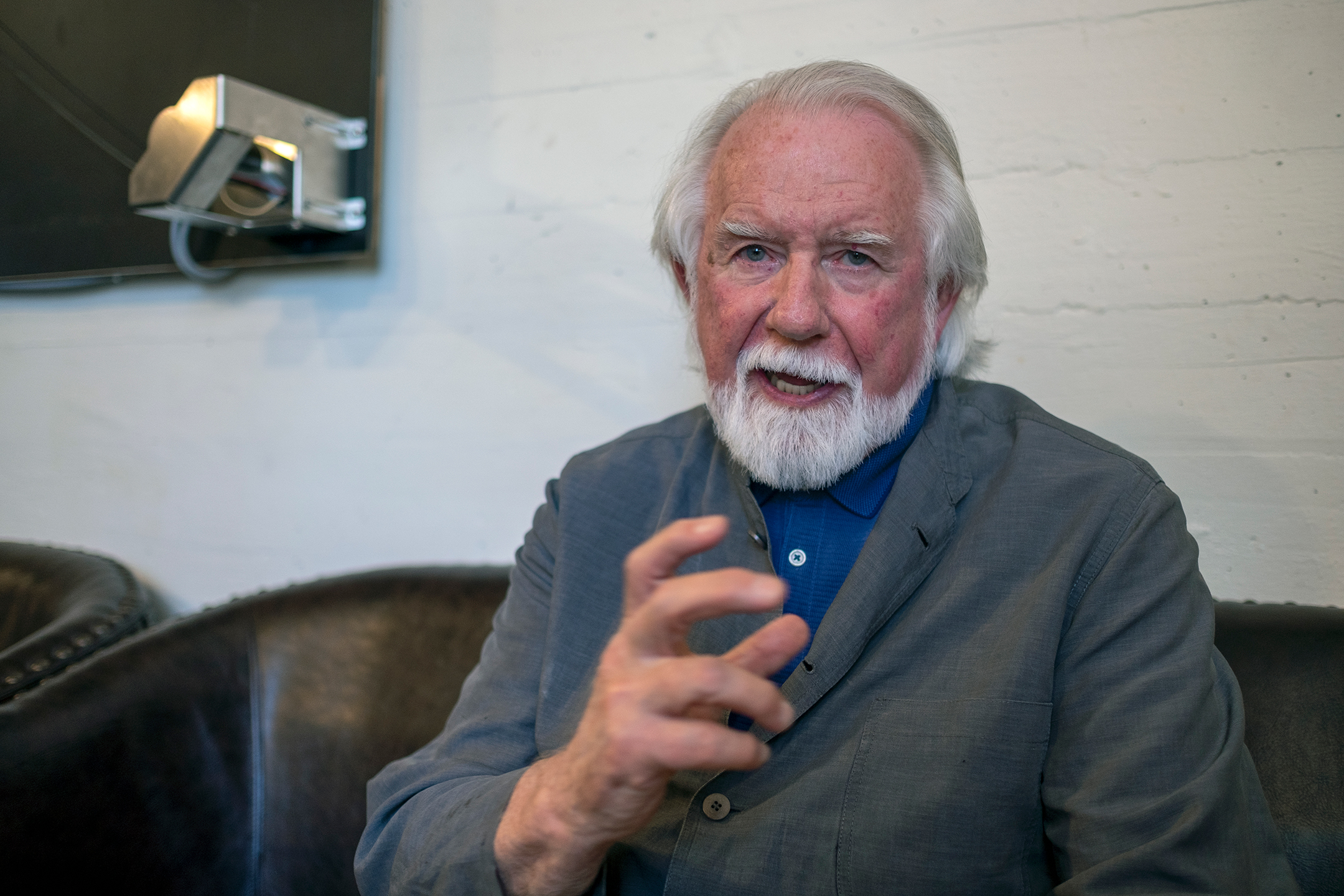 Without Alvy Ray Smith, we wouldn't have Pixar. We also likely wouldn't be able to render images on screens and edit them through programs like Photoshop. THANKS.

Despite being officially assimilated into the Disney collective in 2006, Pixar remains the gold standard of individuality in Hollywood filmmaking, animated or otherwise. (Sorry, Lucasfilm.) WALL-E, Up, Inside Out, Coco, and Luca—all post-acquisition releases that are wildly inventive, achingly personal, and deeply spiritual, not to mention vibrant as an acid trip. On all those scores—and, maybe especially, the last one—we can thank Alvy Ray Smith. It’s OK, I didn’t recognize the name, either, and I’ve been a Pixar fanboy since the first Toy Story. Pixar lore is littered with boldfaced names: George Lucas, who seeded the company at Lucasfilm; Steve Jobs, who bought it from Lucasfilm; John Lasseter and Ed Catmull, creatives whose imaginations birthed computer animation as we know it. But as Steven Levy argues in Wired, Pixar wouldn’t have been possible without Smith. It’s just that because of the vagaries of Hollywood and the nature of volatile personalities, Smith, who’s work as a computer scientist and creative—aided along the way by psychedelics—helped birth digital graphics as we know them, has been edited out of the narratives. “You may not be able to pinpoint Smith’s presence in the code of the alpha channel or in the swooping camera pivot in The Wrath of Khan. But it’s there,” Levy writes. “The breakthrough behind the Pixar films was that it didn’t matter that movie screens and iPads were streaming bits entirely created within computers—the emotions they unleashed were as vivid as those produced by a human performance.” Believe it or not, there’s more to Smith’s impact than even those bits, like Digital Light, which is a wild concept. But why read my hammy aggregation? Reward yourself for a job well done this weekend by reading Levy’s superb profile. (Seriously, I hate what the magazine profile has become and this one is exceptional.) Or pick up Smith’s book A Biography of the Pixel, which is out now. You’ll find your mind expanded, no LSD required. Now, if you’ll excuse me, I’m going to microdose Coco. —Dante A. Ciampaglia