Analog Work, Deepcut Bond, and Leafblower Blowback: Five Things That Made Us Smarter This Week

From decoding familiar soundscapes to sharpening tusk science, we learned a lot over the last seven days 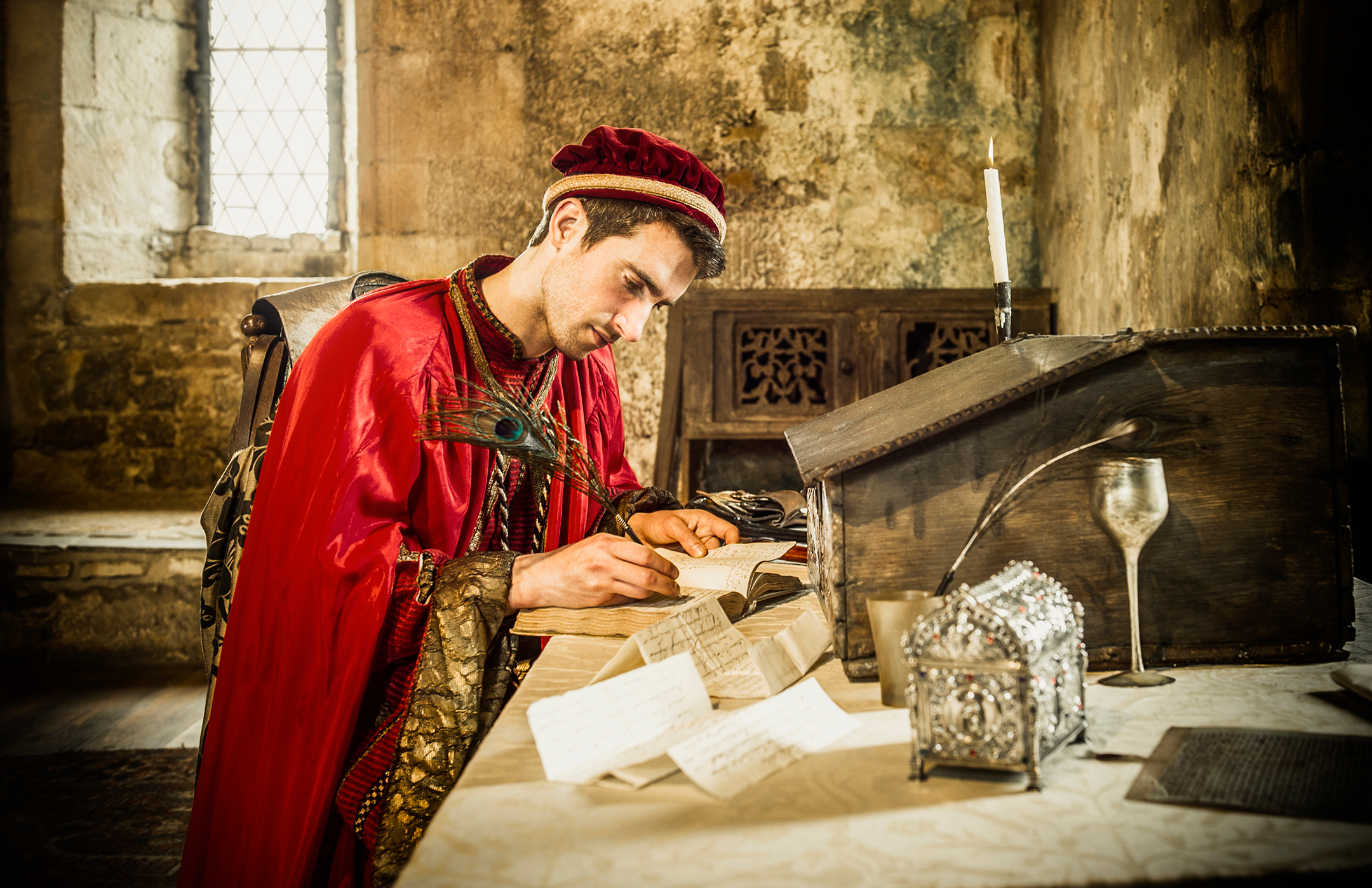 We go now live to Hollywood, where a screenwriter is hard at work on the next Avengers movie...

Lots of writers favor analog methods. Lyndon Johnson biographer Robert Caro famously uses a typewriter. Stephen King likes a good fountain pen. And the guy who wrote the most recent Dune screenplay found an ingenious middle road between old-fashioned pen-and-paper and modern computers: he used a 30 year-old MS DOS software that barely functions. “It’s half superstition and half fear of change,” Eric Roth told Motherboard, sitting at a clunky beige keyboard that looks straight out of WarGames. His computer isn’t connected to the internet, and the software he’s using can only handle about 40 pages of text at a time. “I realize if I hadn’t said it in 40 pages I’m starting to get in trouble,” he said. Good discipline for any writer.

A lot of the tools we think of as being designed for productivity—laptops, chat software, mobile apps—are really just vacuums for attention. Mental labor takes sustained focus, and it should tell us something when the people at the top of their craft, from screenwriters to coders, go to great lengths to escape the vortex of distraction. “Analog experiences can provide us with the kind of real-world pleasures and rewards digital ones cannot,” David Sax argued in his book The Revenge of Analog. “Sometimes analog simply outperforms digital as the best solution.” I don’t think it’s about high-tech vs. low-tech superiority but rather selecting the right tool for the job. I love the internet for its ability to take me down meandering trains of thought and quickly answer specific questions. But if you need to sit down and think, to brainstorm what characters on a distant planet in a fictional world might say and do in the middle of a sandstorm, you don’t need a broadband connection. You need a writing tool that will fade into the background and leave you alone with your imagination. —Eric Johnson 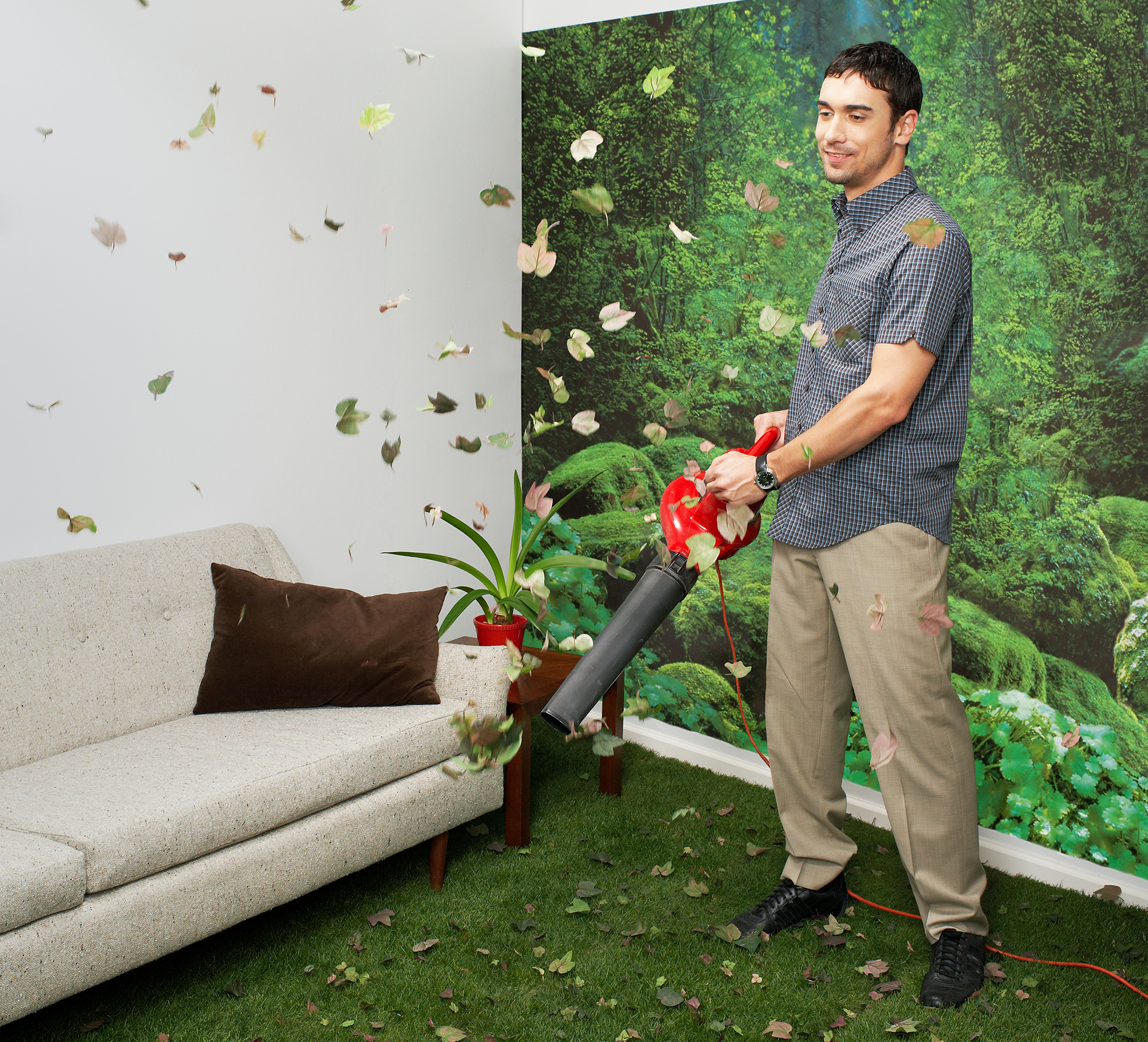 Honestly, this is about as productive as using a leaf blower to clear your yard.

Leaf the Yardwork to Nature

Leaf blowers are self-evidently pointless. They don’t change the fact of leaves on the ground; they just shift them from being one person’s problem to another’s. And they always seem to do it, loudly, at 6:30 a.m. on glorious fall mornings when I’m trying to sleep in. If you’re going to make that much racket, and haul around that much horsepower, why not vacuum up the leaves? Turn them into a nice mulch pile? Scattering them from one place to another just makes no sense. Margaret Renkl of the New York Times is with me, and in an op-ed of Shakespearean lyricism—“The First Thing We Do, Let’s Kill All the Leaf Blowers”—she makes the case for leaf-shuffling as an environmental menace.

Writing of lovely fall mornings wrecked by lawn-care rancor, she goes full horror movie. “Into the midst of all this beauty,” she writes, “the kind of beauty that makes despair seem like only a figment of the midnight imagination, the monsters arrive. They come in a deafening, surging swarm, blasting from lawn to lawn and filling the air with the stench of gasoline and death.” For all the intense prose, Renkl does a rare thing in our age of emotional hot-takes and ideological intensity: she makes a fact-filled, persuasive case for eradicating the leaf blower. “A 2011 Edmunds study found that a two-stroke gasoline-powered leaf blower spewed out more pollution than a 6,200-pound Ford F-150 SVT Raptor pickup truck,” Renkl reports. Those highly inefficient engines kick up enormous amounts of lung-damaging dust while screaming at volumes equivalent to a jet taking off. Topping it all off, the leaves they’re flinging out of our yards are actually good for the soil and biodiversity. We’re making a mess in pursuit of a blinkered vision of fescued perfection. “The ideal fertilizer and mulch can’t be found in your local garden center. They are available at no cost in the form of a tree’s own leaves,” Renkl argues. “The best thing to do with fallen leaves is to mulch them with a lawn mower.” Or just let them lie where they fall, an innovative solution that nature has been refining for quite a while. —Stefanie Sanford 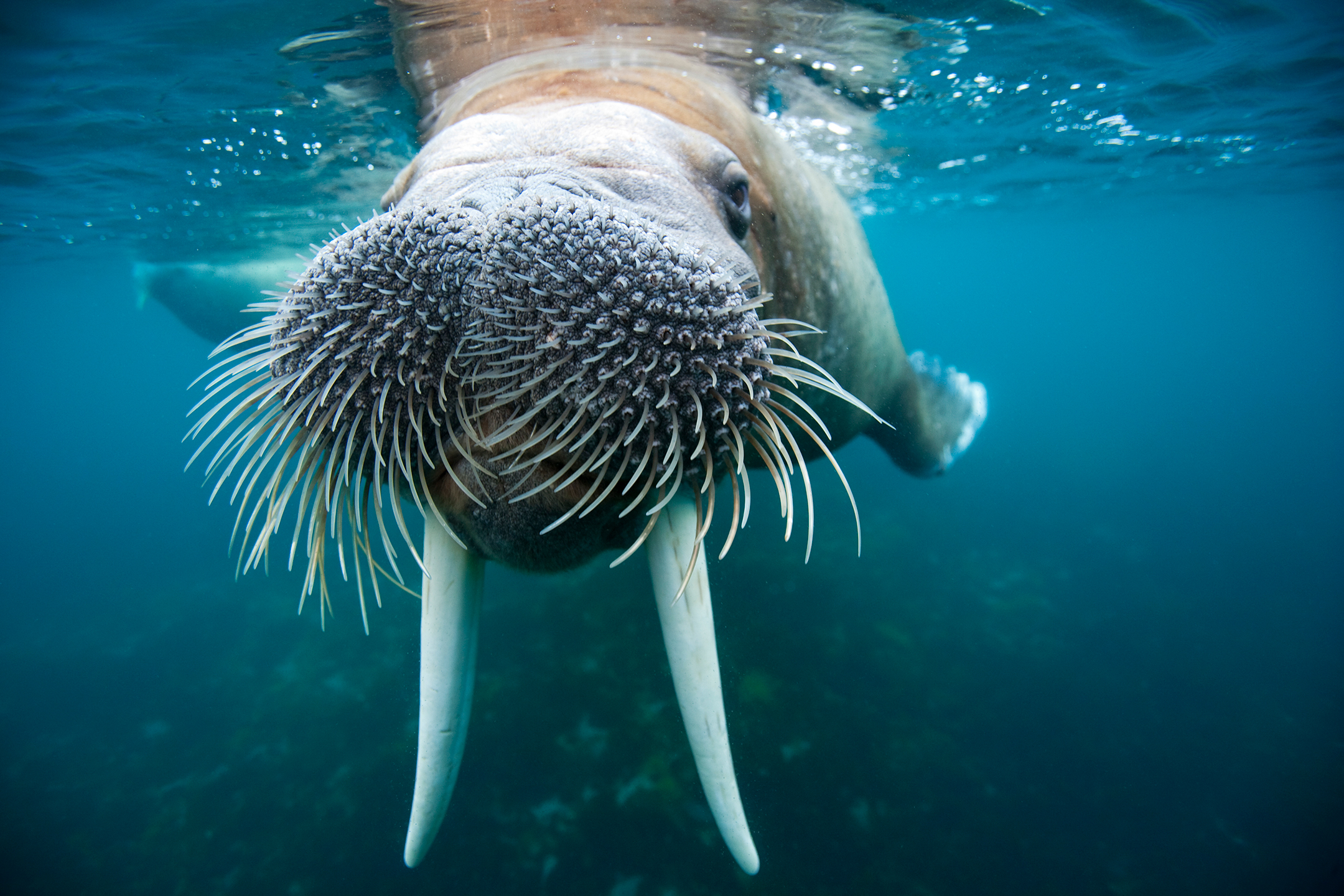 Yeah, and how do you clean *your* teeth?

I recently visited the Smithsonian National Zoo, where I spent some time with Spike, the institution’s only tusked elephant. (Elephants eating—absolutely thrilling.) I didn't think too much about Spike’s tusks at the time, but this week the Proceedings of the Royal Society B published a new study on the evolution of mammals' tusks. The study, helpfully translated into less-scientific terms by the New York Times, revealed that tusks are continuously growing teeth, they’re only found in mammals, and they’re used for everything from fighting to foraging. The study’s authors examined skulls of mammal relatives called dicynodonts, "tusked, turtle-beaked herbivores ranging in stature from gopher-size burrowers to six-ton behemoths" that lived 225 million years ago. They discovered that dicynodonts developed soft tissue supporting their teeth and did not continuously replace them. These evolutionary traits eventually became tusks. Similarly, the enamel on early elephants' teeth thinned and disappeared, allowing their incisors to grow continuously and become tusks. Tusk evolution is fascinating, but it’s also painful. Narwhals' tusks grow through their upper lip, creating a permanent open wound. More broadly, ivory has long been coveted by humans, leading to the extinction or near extinction of our tusked brethren. Some elephants have even continued to evolve to lose their tusks—no doubt a survival mechanism brought on by human hunting. Despite the dark history, I can’t stop geeking out over fun tusk facts. For instance, did you know that, just like humans are right or left-handed, elephants have a preferred tusk? Next time you visit a zoo, check to see if the elephants have a groove in one of their tusks—that's an indication of which one they use the most. —Hannah Van Drie 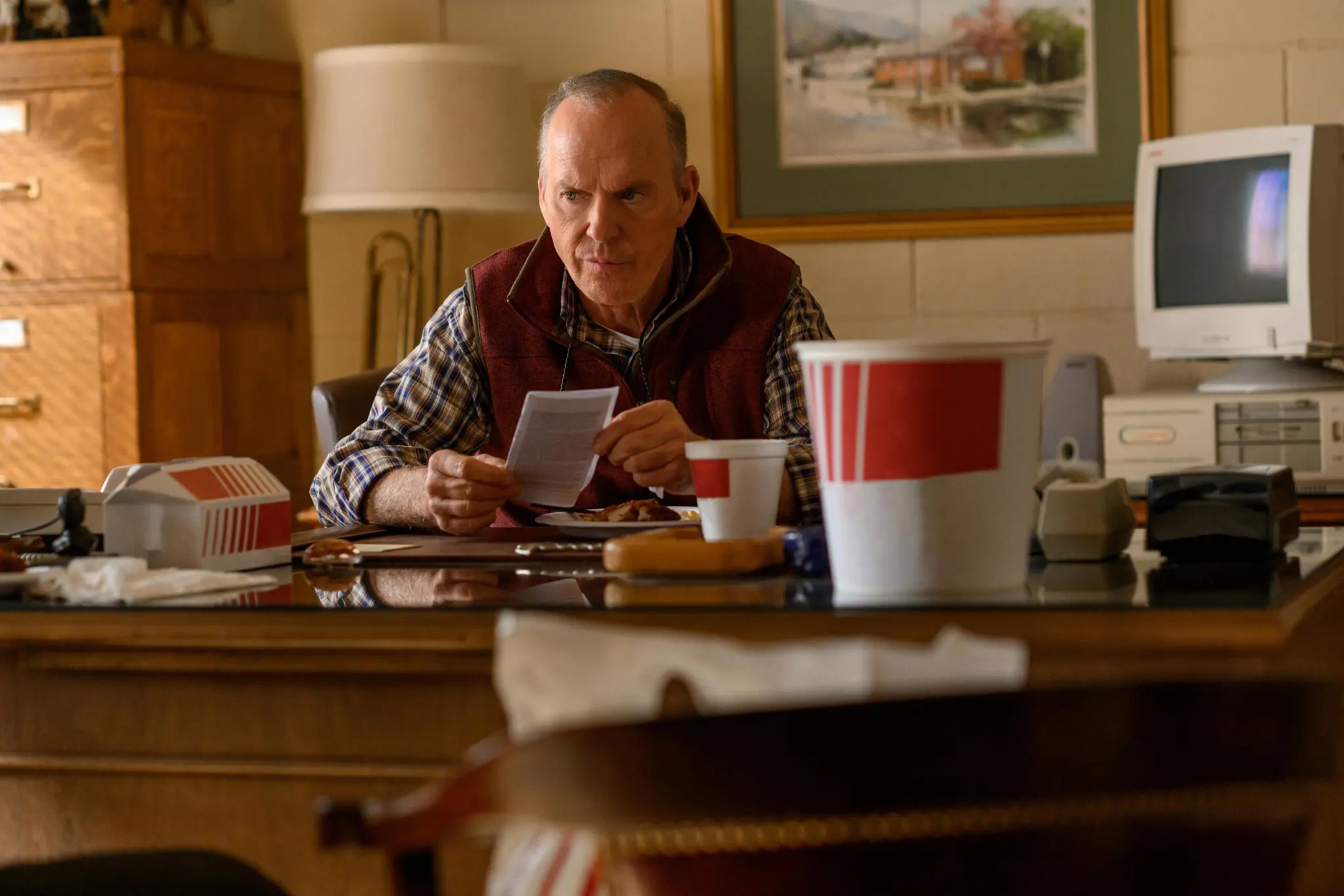 No better way to get people to pay attention to a serious issue than to cast Michael Keaton as our surrogate in the story.

The recent Hulu adaptation of Beth Macy’s harrowing book Dopesick is earnest and educational, if a little clunky. Too much of the dialogue sounds like it was lifted from an op-ed, which takes some of the power away from the characters grappling with America’s opioid crisis. But I’m glad to see Macy’s work getting more attention because she does what so few national journalists have done over the last few decades: pay close attention to the huge forces reshaping life in rural, small-town America. It isn’t just economics and demographics that have upended life outside of the country’s major metropolitan areas; Macy is brilliantly attuned to the policy decisions that have hollowed out once-thriving communities in Appalachia, the midwest, rural southeast, and just about everywhere that isn’t within commuting distance of a big city. "My goal was to mobilize people to care about this,” she says of her reporting on devastated communities in Dopesick. It’s a mission she’s brought to neglected subjects before. Her earlier book, Factory Man, was a deeply detailed look at the struggle of Bassett Furniture in rural Virginia to survive the era of globalization and free trade with China. In that book, too, she was brilliant in finding the personal narratives behind the giant trends. “I want to know what people fear and desire—I want to know what keeps them up at night,” Macy said in an interview with the Brooklyn Public Library. It’s a very humane way of looking at the world, and it has made Macy—from her home in Roanoke, Virginia—one of the most influential writers in the country. —Eric Johnson 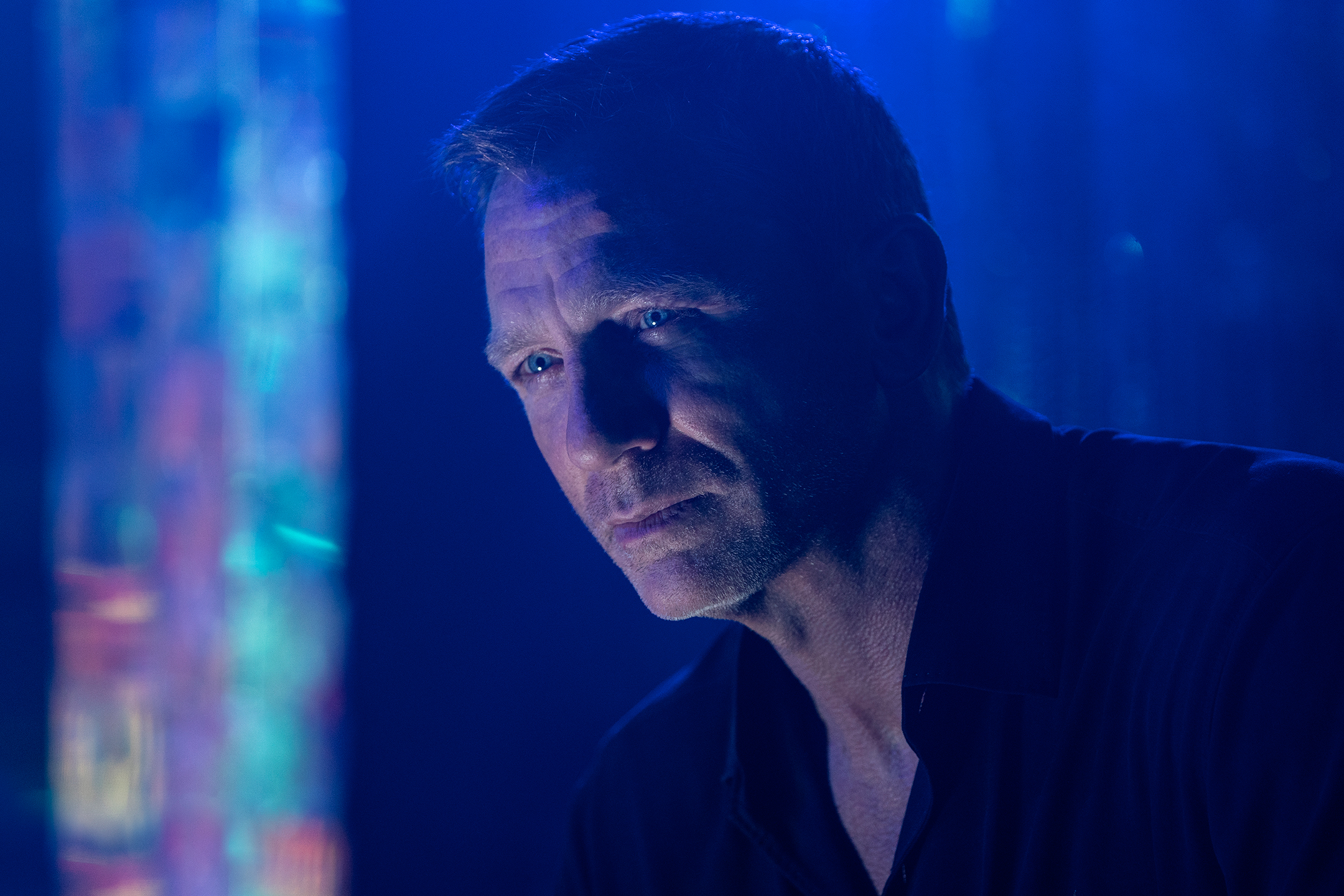 My steely blue eyes get a thousand-yard stare while the whole world turns to neon when I hear the Bond theme, too, Daniel Craig.

For Our Ears Only

Diamonds are forever, and so is James Bond. From casinos royale to Russia (with love) to raking the moon and everywhere in between, the world is not enough for the incorrigible agent on her majesty’s secret service in his pursuit of Spectre, Goldfinger, Dr. No, or any of the other megalomaniac bad guys he has a license to kill. And even if he has the living daylights knocked out of him once in a while, Bond’s live and let die attitude to the job offers a quantum of solace: while everyone else might only live twice, 007 has enjoyed six (soon to be seven) lifetimes. (So many views to so many kills!) Tomorrow never dies, and neither does Bond. We love the spy who has no time to die (or at least puts death off for another day), and the sky would need to fall for that affair to end. And through all the thunderballs and golden eyes over the last 60 years and 25 films it’s tempting to think we know everything there is about this man who carries a golden gun. But the podcast Switched On Pop parachutes into our feeds with a fantastic episode all about the indelible Bond theme song, composed by John Barry, the struggle to get one written, and the truly staggering depths contained within it. “Barry said that he wanted Bond to be a mix of all kinds of different things: jazz, classics, pop,” co-host Charlie Harding says. “He wanted a Bond style. And I think we have to understand it as a mashup. Today, when we hear the James Bond theme, we think this is the sound of spy music. But like all original creations, it's a compilation of so many influences.” The episode digs deep into the track, how it created the aural identity for the series, which every subsequent composer (and theme song performer) has had to contend with, and how it has been deconstructed, flipped, inverted, and pulled like musical taffy to create new sounds while adhering to the series’ sonic template. (I’m glad I’m not a composer working on a Bond film; it sounds like trying to herd eight cats.) Switched On Pop is a fun podcast, but I loved this episode so much. It made me more excited for Daniel Craig’s last outing as 007, and it gave me a reason to go back and revisit the rest of the franchise—with new ears, at least. —Dante A. Ciampaglia