A whole lot of money is about to be unleashed on public education. Here’s how the technology powering cryptocurrency could help ensure it's spent wisely.

A decade ago, Marc Andreesen famously proclaimed software was eating the world. While that’s certainly true for how we work and play, governance has avoided software’s insatiable appetite. Today’s systems are still mostly based on ancient hierarchical frameworks: big and complex tasks require many people, and coordinating their activities requires managers and manager of managers and on and on. But blockchain—technology commonly associated with cryptocurrencies—offers a digital path forward. And not a moment too soon.

President Biden recently unveiled a $6 trillion budget for fiscal year 2022. Under the plan, the Department of Education budget would increase by 41%, to $103 billion. The proposal still needs congressional approval, but it signals the administration’s policy priorities of boosting resources for the country’s public education system. But even if the DOE doesn’t get all that new money, there will be a lot of dollars sloshing around and accounting for those funds. Thus ensuring the funds are spent wisely will be a paramount concern.

That gives blockchain an opening, specifically decentralized autonomous organizations. DAOs are an emerging institutional technology, but they’re creating new ways of coordinating human activity in productive ways, and at a large scale—and they could reshape how governments and industries conduct their business.

But let’s take a step back. Anyone invested—literally or emotionally—in crypto, be it Bitcoin or NFTs, will likely cheer for any expansion of blockchain into the public sector. But this is bleeding-edge stuff, and most people are confused by or skeptical of the technology. According to a 2018 Department of Homeland Security report, American companies are more likely to feel that blockchain is “overhyped” and less likely to invest in it than those in other countries. (Blockchain vanguard nations include Canada, China, Estonia, and the United Arab Emirates.) Still, the U.S. government has begun experimenting with blockchain proof-of-concepts in health services, immigration services, financial services, and supply chain management.

The government has good reason to investigate potential uses of blockchain. As EY Global Public Finance Management Leader Mark MacDonald put it in 2019, “Modern public financial management requires focusing on the things that matter most—transparency, accountability and robust evidence for decision-making—all factors that can be enhanced by blockchain technology.”

“Transparency, accountability and robust evidence for decision-making” are certainly priorities when it comes to education spending. So why not introduce blockchain—in the form of DAOs—into the governance? What would that even look like? 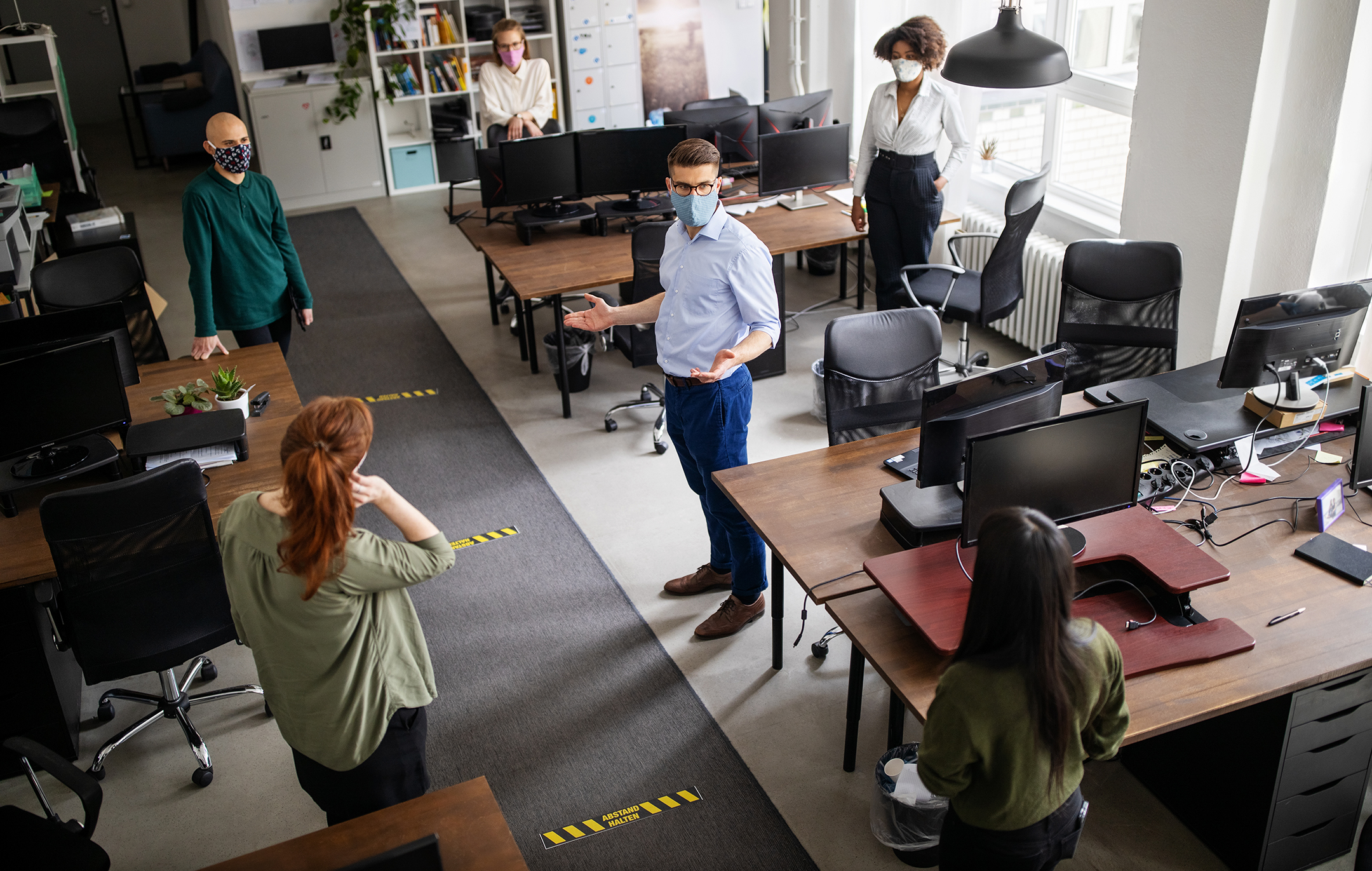 Hierarchical structures—like an office or team led by someone at the top—has been the primary way we organize for thousands of years. But blockchain technology offers an opportunity for evolution in that dynamic.

What is a DAO?

An explanation of what we’re talking about when discussing blockchain and DAOs is in order.

Distributed organizations are the latest step in a millennia-old process of institutional evolution. The process began when people organized around characteristics of their leaders within hierarchical structures (communities, kingdoms, nations). That led to the modern bureaucracy and today’s platform economy. In this current model, organizations are hybrids of distributed automated platforms and centralized business organizations managed by people. Think Airbnb, Uber, WeChat, or Zoom: all are centralized digital platforms operated by private businesses and distributed user bases.

Blockchain technology points toward a new era in organization management and the possibility of eliminating governing intermediaries, creating a structure with decentralized control—in other words, a DAO. A decentralized autonomous organization is one run by rules created and modified by an online community of members through consensus, which are then written into a set of contracts executed through computer code on a blockchain. This enables automated management of the operations of the members and their resources.

The cryptocurrency community has experimented with this kind of model since Bitcoin managed to eliminate middlemen in financial transactions in 2009. Similarly, the central idea behind a DAO is establishing an organization that fully functions without hierarchical management.

Here’s how a DAO might work: Imagine a delivery-only kitchen that takes your money and gives you food, then uses that revenue to automatically stock the pantry, order cleaning services, and pay the rent. At the same time, everyone who orders from the kitchen has a say in what food it will serve and how often it should be cleaned. There are no managers—all of these processes are pre-written into code. 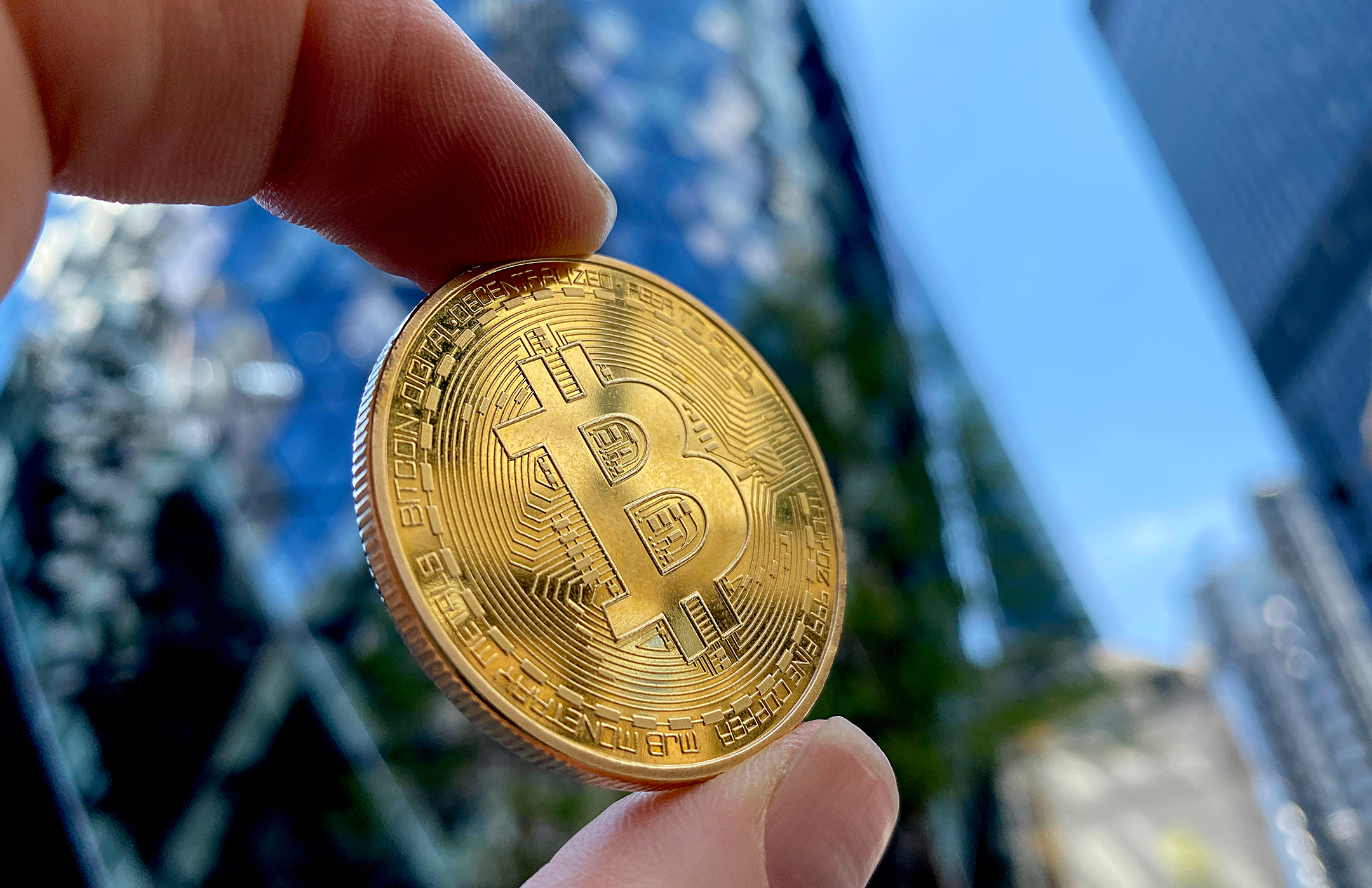 A visual representation of Bitcoin cryptocurrency is pictured on May 30, 2021, in London, England. The cryptocurrency doesn't actually exist in physical form, but it is the most recognizable manifestation of blockchain technology.

At the heart of DAOs is the idea that networks are about value as measured by a token. That sounds a bit strange but let me explain—starting with explaining blockchain.

Simply put, a blockchain is an accounting ledger that tracks something of value. This ledger is hosted on many computers in a peer-to-peer network. There is no one central server running a blockchain. And critically, there is no one person who has full control of it. Rather, it’s a global, decentralized database distributed across computer systems that tracks the exchange of value—represented by the token, which is considered a scarce resource. (There are a finite number of Bitcoin, for instance, which is one reason it’s considered so valuable as an investment tool.) Each block in the chain records transactions, and every time a new transaction occurs a record of it is added to every participant’s ledger. To change or hack the system, one needs to alter the transaction entries in every participant’s ledger.

DAOs aim to be meritocratic, and distributed ledgers are a crucial component of that. A token-driven market mechanism defines any one person’s position within the group, which is based on the value they have contributed. That value and the corresponding reputation it confers define a person’s status within the community, which gets encoded as tokens on a blockchain. No one needs to know or trust anyone else. Each organization member has a copy of the exact same data in the form of a distributed ledger. If a member’s ledger is altered or corrupted in any way, it will be rejected by the majority of the members in the network.

Distributed organizations draw upon the intelligence of many people. They try to avoid situations of being overly influenced or persuaded by highly influential members, and they try to harness a diversity of perspectives from all the members. DAOs work through a process whereby members propose new ideas, decisions, or initiatives; invest their tokens into what they believe is most viable; and are rewarded if the idea, decision, or initiative is selected. 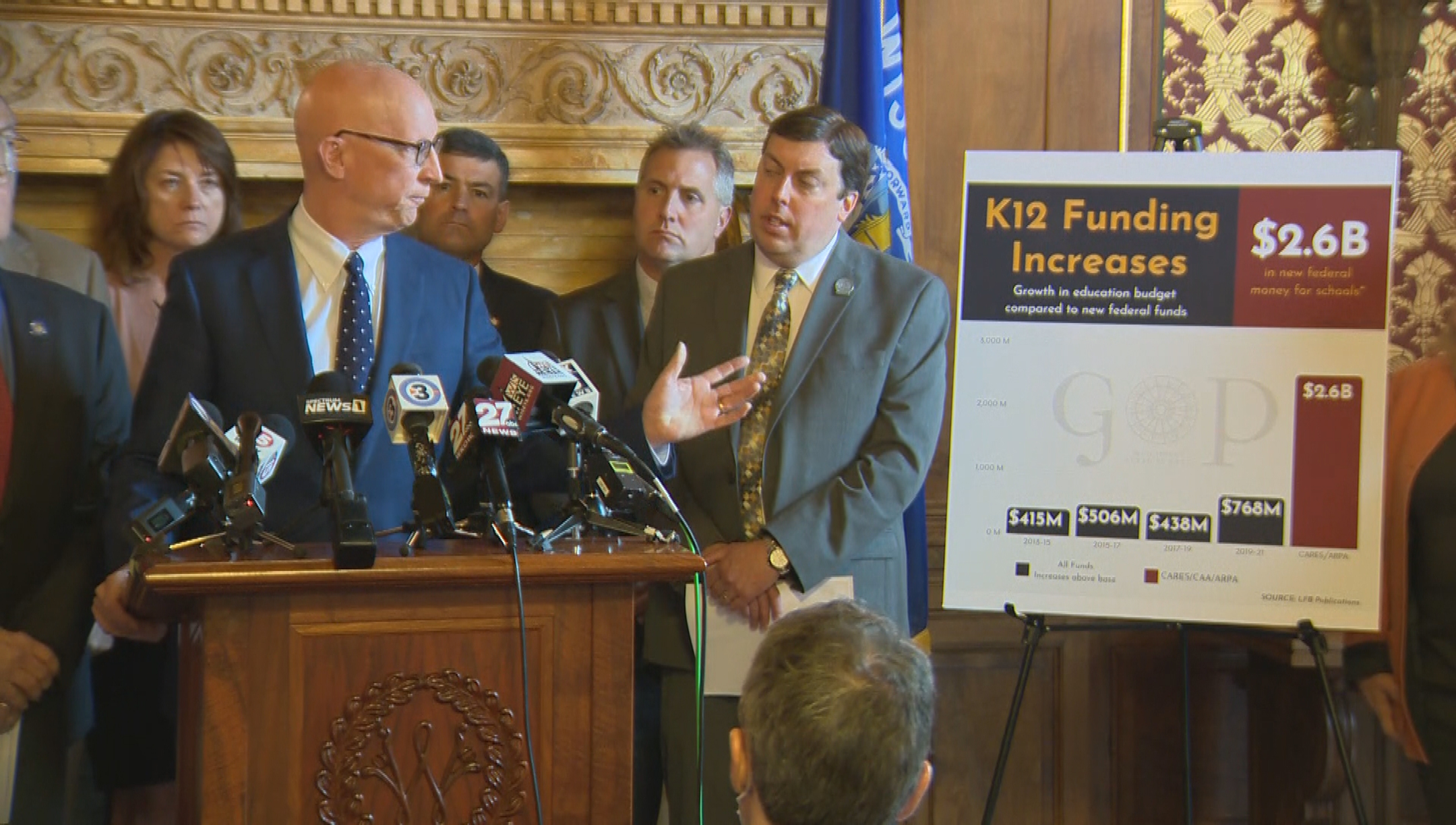 Republican leaders in Wisconsin discuss plans to spend billions in federal education aid. How state governments coordinate with localities and federal officials in allocating such monies can be aided by blockchain-backed DAOs.

Got all that? Good. Now let’s piece together a hypothetical DAO for the United States Department of Education.

Step One: Create an engaged online community. This includes members who have a successful track record in education and who bring diverse perspectives, specialized knowledge, unique leverages, and talented personnel. With membership open to public, talent is sourced on a large scale.

Step Two: Create tokens to fund the network. A “governance token” that members use to vote on proposals and incentivizes members for contributing winning ideas. And a “payment token” to reward network participants for the actual work that they carry out or to pay developers for coding the smart contracts. Typically, a fixed number of governance tokens and payment tokens are created.

Step Three: Airdrop “governance tokens” to members. Bootstrap the network by issuing a portion of the total supply of governance tokens to members. The remaining tokens are set aside to reward members based on their contribution to the network with ideas, smart contract coding, and actual implementation of the work. These tokens will have monetary value determined by the market made up of users and members of this network. This incentivizes network members to actively participate and contribute ideas.

Step Four: Pool ideas and vote. Members vote on proposals using governance tokens. Proposals are suggested by the government but may also come from members. Those who vote on winning proposals earn rewards as “governance tokens.” Over time, members who contribute to the DAO earn more reward tokens. Implementing “locking mechanisms”—for example, locking tokens voted on proposals for a period of time—reduces the risk of members with large token holdings of winning all proposals.

Step Five: Smart contracts code the rules of operations. This includes airdrops, voting, incentive rewards, and funding processes. Since all project information resides on a blockchain, information is transparent. Funds are released only by the automatic execution of code on the blockchain, when all project parameters are met and delivered.

Step Six: Members who deliver projects are paid in “funding tokens.” Payment tokens can be pegged to the U.S. dollar to allow organizations to convert their tokens into fiat money and not endure the pains of token price volatility. Alternatively, members can hold onto their “payment tokens” to swiftly transfer funds among the various institutions involved in a project. 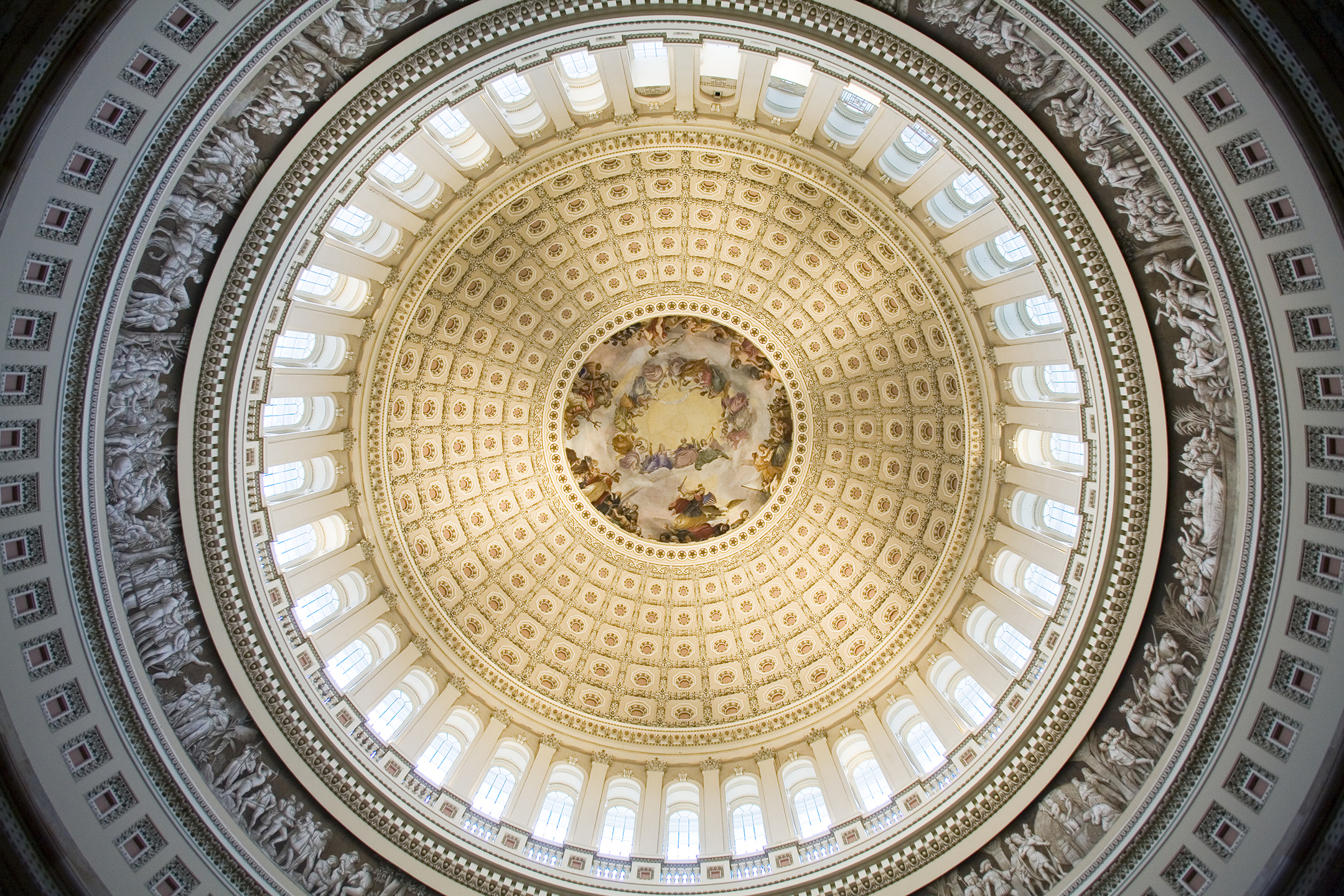 "Apotheosis of Washington" by Constantino Brumidi, a fresco painting in the dome of the U.S. Capitol Rotunda. Looks kind of like a physical Bitcoin, doesn't it?

There you go, Washington. The token is in your wallet!

Except, not really. DAOs are still very much in their infancy and experimental. Creating a hypothetical DOE DAO is a fun exercise, but it’s important to note the challenges of this becoming a reality.

In many ways we still lack some basic science to understand how self-organizing social systems work in a stable, safe, and secure way. One example: bugs. DAOs exist in code can contain errors that can then be exploited to siphon off tokens (that is, money). Also, today’s DAOs are slow and inefficient.

Nevertheless, the potential for decentralized autonomous organizations is great. Thanks to organizations like Aragon One, Colony, DAOStack, and Moloch, DAOs are growing as the underlying technology develops and our understanding of self-organizing distributed systems matures.

This part of the world isn’t quite ready to be consumed by software. Still, blockchain and new systems of distributed governance can play a major role in providing the trust, infrastructure, platforms, and solutions that will guide massive social systems in the 21st century.