For students on the wrong side of the digital divide, their biggest hurdle is often access—particularly to reliable, and affordable, high-speed internet. The last two-plus pandemic years shone a bright light on the problem as young people (and adults) around the country struggled to bridge the divide and keep up with remote learning.

In 2021, the federal government stepped in to assist with the cost of high-speed internet access. As part of a broader covid-19 relief package, the Emergency Broadband Benefit program provided qualifying households with a temporary $50-a-month discount on internet service.

The Affordable Connectivity Program (ACP), which went into effect on January 1, gives a $30 monthly subsidy to those who qualify to help pay for broadband. (Those on tribal lands are eligible for a discount of up to $75 per month.) Nearly 12 million households have already signed up, and more than 1,300 services providers are part of the program.

On May 9 President Joe Biden announced that 20 companies have committed to cap the monthly cost of high-speed access at $30.

"This means fast Internet, good download speeds, with no data caps and no extra fees for millions of American families," Biden said. “And it’s going to change people’s lives, from rural Appalachia to Brooklyn to the Black Belt."

According to a White House Fact Sheet, households can receive ACP benefits if their income is at or below 200% of the federal poverty level or if they participate in another program, such as Medicaid, Federal Public Housing Assistance, and Supplemental Nutrition Assistance Program. Pell Grant recipients are also eligible.

More information about eligibility requirements and how to apply can be found on GetInternet.gov or by calling 877-384-2575. 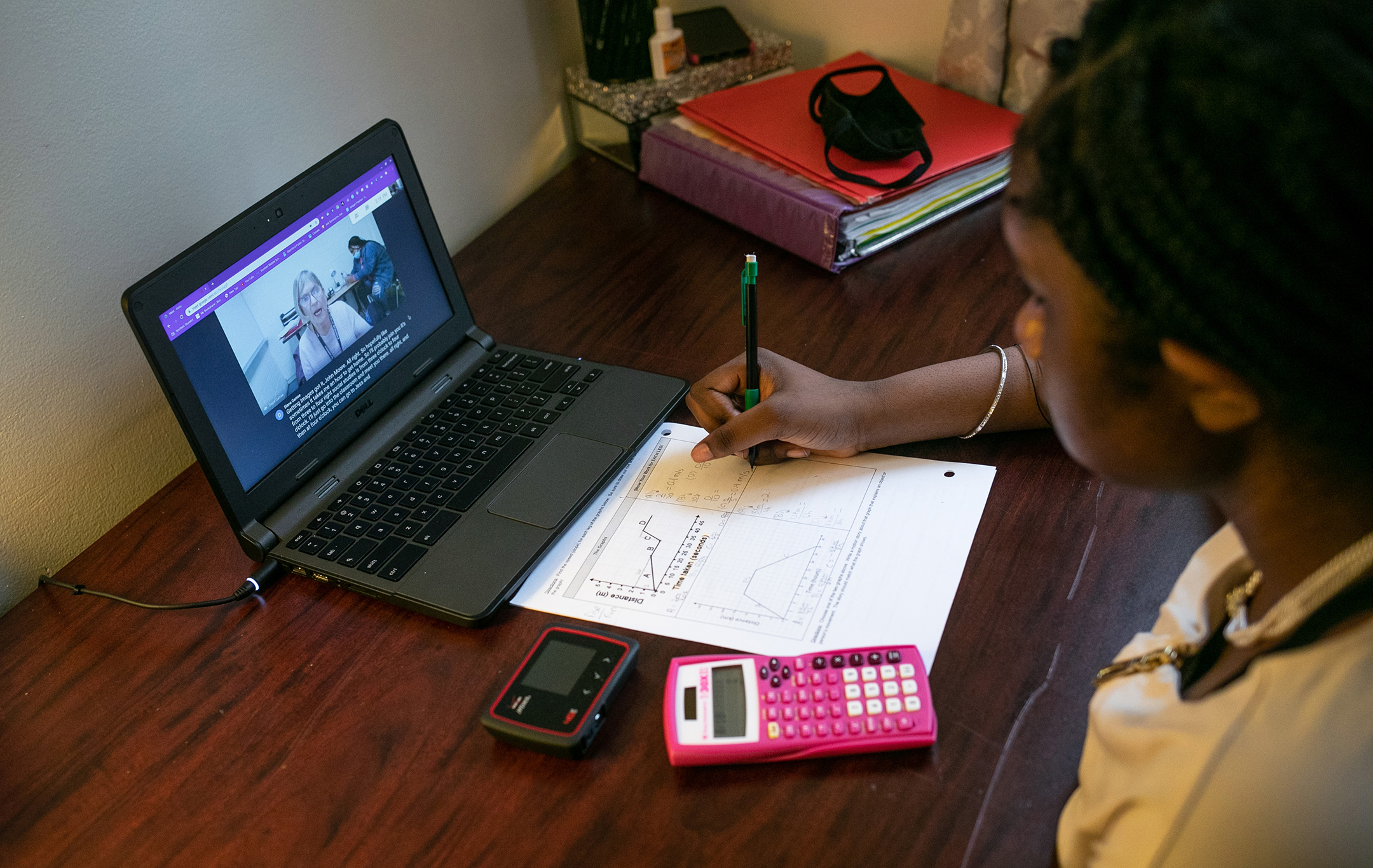 Researchers at Columbia University’s Center on Poverty & Social Policy estimate that 48.6 million American households—or nearly 40% of the country—are eligible for ACP benefits. That includes 11.3 million households that currently have no internet or broadband access at all.

Speaking to PBS NewsHour, Nicol Turner Lee, who directs the Center for Technology Innovation at the Brookings Institution, described the May 9 announcement as a “big deal.” Not only is it the kind of public-private partnership that has become increasingly rare, but it will also make a difference for families who struggled with limited and diminished internet access during the pandemic.

She also noted that the program and commitment from service providers will have a demonstrable impact on the larger digital divide.

“[It’s] more than just the technology itself. It’s about a pathway to some of the economic opportunities that are available,” Turner Lee said. “When 50 million school-aged kids were actually sent home, and 15 to 16 million of them did not have broadband access to learn, that was a problem.”

“And unfortunately, it did disproportionately affect Black and Brown and Native students, who really needed access to learn,” she added. “And I’m not just talking at K–12. I’m talking about college students as well, who left their campuses and went home, where they were in that desert.” 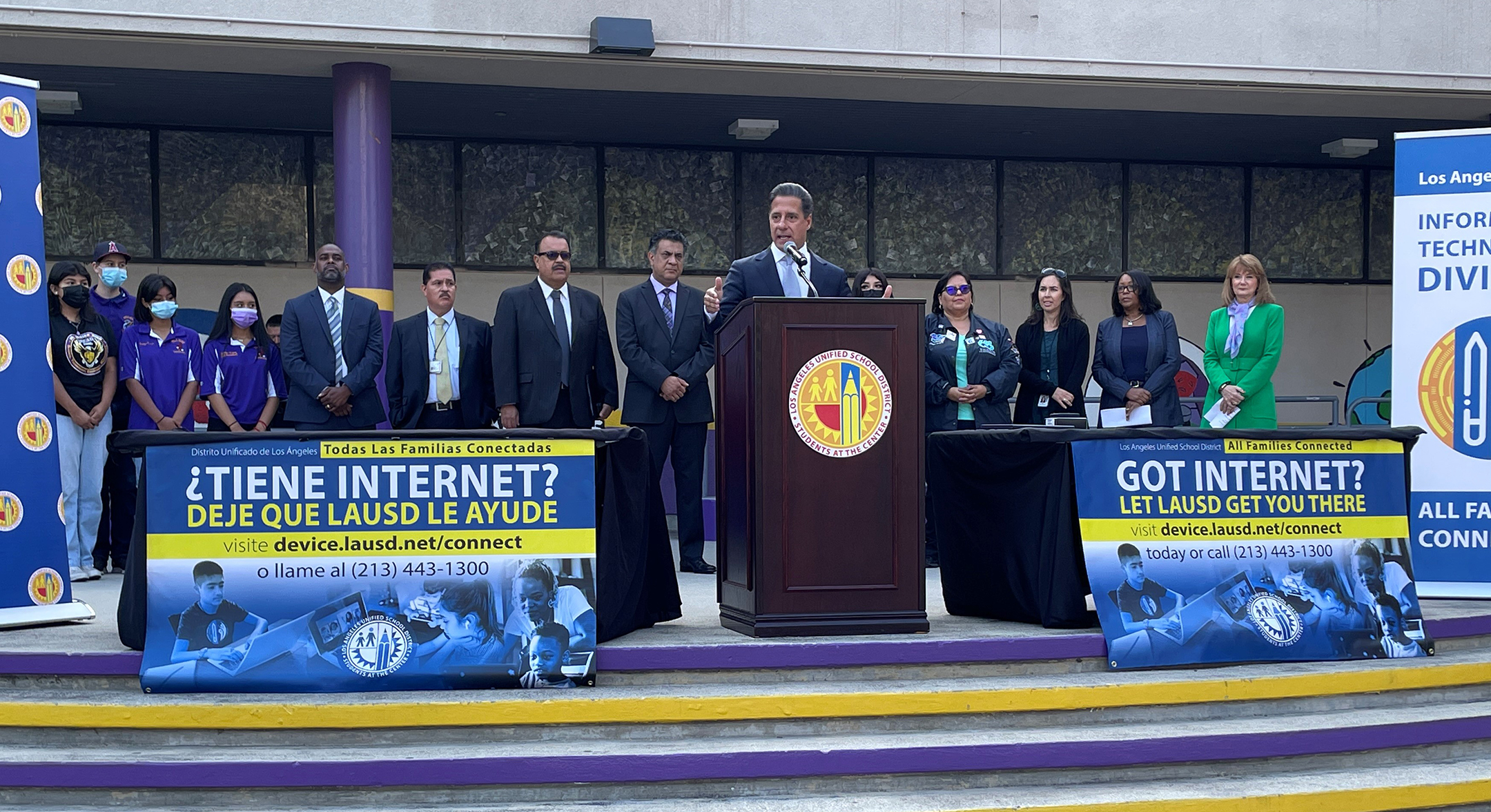 Cities and states around the country are doing their part to combat the problem.

North Carolina is drawing on more than $900 million in American Rescue Plan money and $30 million in state funds to build out its broadband infrastructure. “Out of that,” CBS17 reports, “$380 million will go towards the GREAT grant program, which expands internet access in rural areas.”

In Chicago, 100,00 student families lacked internet access at the start of the pandemic. Today, only 80% of city resident households have internet access, with neighborhoods like West Englewood and Burnside below 62% and 58%, respectively.

The city will similarly draw on federal money, specifically a piece of the $65 billion included in the Infrastructure Investment and Jobs Act, to combat the digital divide and get more Chicagoans connected. How it’s used will be guided, in part, by the University of Chicago Data Science Institute Internet Equity Initiative, which launched a data portal this month “to guide research, policy, and community action.”

And earlier this month, Los Angeles Unified School District, the nation’s second largest school system with 450,000 students, announced it was investing $50 million to provide reliable connectivity to needy student families. It’s an urgent infusion for a district where 20% of its students, or roughly 90,000 kids, have limited or no broadband access.

To help that population, L.A. Unified will lean on short-term federal funding and partnerships with AT&T and Charter Communications, who will offer discounted rates to students’ households.

“Connectivity and universal ubiquitous access to digital content anytime anywhere, whether in school, in the community, in the park or the public library, is a civil right that must be delivered to our generation,” L.A. Unified superintendent Alberto Carvalho said at the May 3 announcement.

Learn more about the Affordable Connectivity Program and how to apply for it by visiting GetInternet.gov or calling 877-384-2575.

The Digital Divide, Learning Loss, and the Future of the American Classroom