The United States is officially in a recession. If history is any guide, one result will be that states will cut funding for public colleges and universities, and that in turn means students and families will struggle more than ever to pay for college. The recession could also push more students into college, in search of credentials and degrees that will make them more appealing in a highly competitive job market.

How do we know this could happen? We’ve been here before. More than a decade ago, the Great Recession, which officially began in December 2007 and ended in June 2009, threw higher education into upheaval. Institutions in some states have still not fully recovered from losses in public funding. Students, meanwhile, had to shoulder more school loan debt to pay for their education.

Recessions are expected parts of the economic cycle. But the current downturn was hastened by the coronavirus, which ground the economy to a halt and led to an American unemployment rate of 13.3% in May. At its worst, unemployment during the Great Recession was 10%. What does that mean for education as this new recession begins? Are we doomed to repeat the experience of a decade ago?

The Elective spoke with Jennifer Ma, senior policy research scientist at the College Board, about the lessons that can be learned from the Great Recession to help mitigate the hard times to come in higher education. 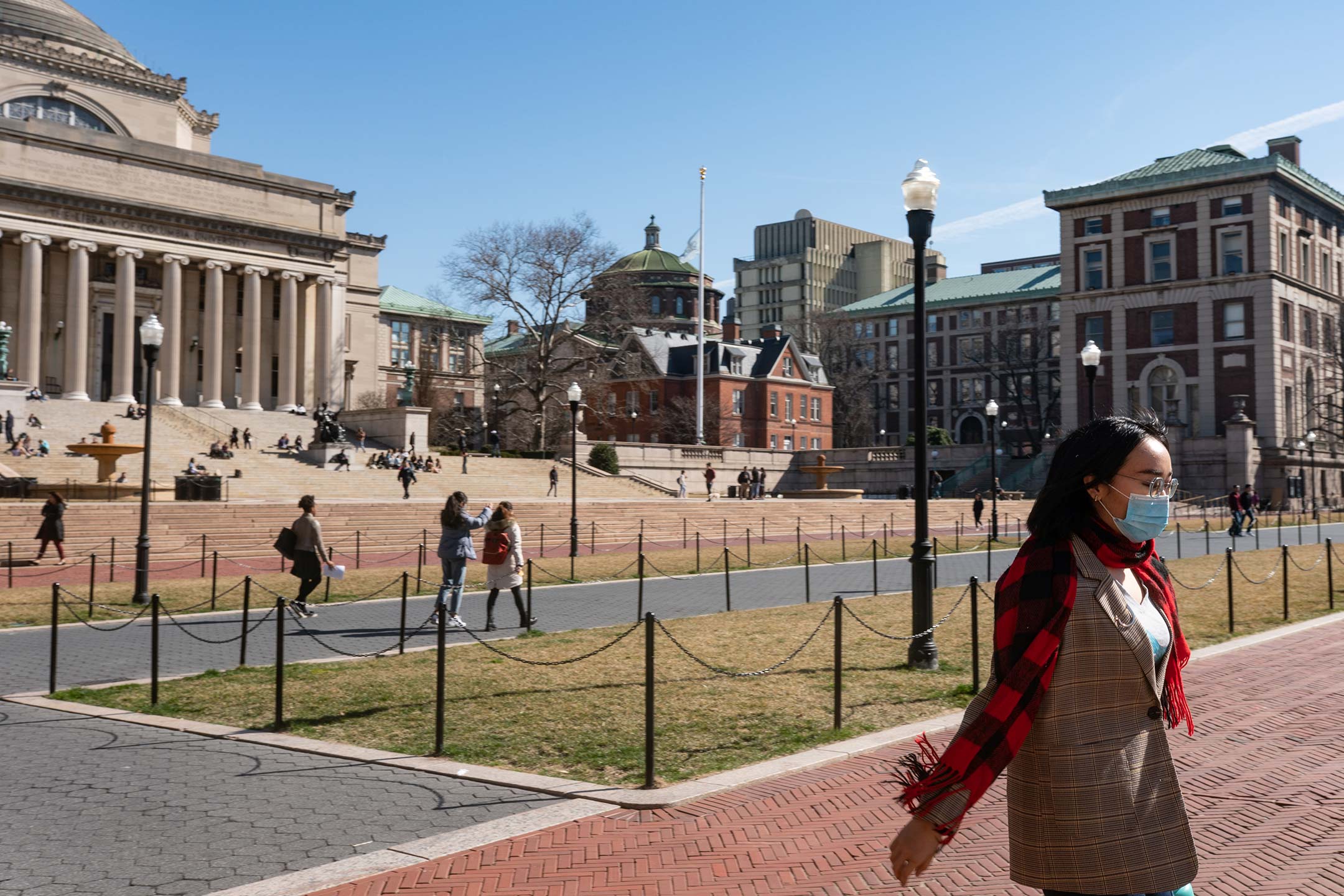 A woman wearing a protective mask walks on the Columbia University campus on March 9, 2020, in New York City.

What were some of the most important effects the Great Recession had on higher education institutions? How did the type of institution—public/private, national/regional, for-profit/not-for-profit—influence those effects?

The Great Recession had long-lasting impacts on higher education institutions. Because of budget shortfalls, most states had to cut appropriations to higher education during and after the recession. In turn, many public institutions raised tuition to make up for the lost revenue from state appropriations. For example, at public doctoral institutions, the share of total revenues coming from tuition increased from 31% in 2006-07 to 40% in 2011-12 and to 43% in 2016-17. Similar trends occurred at other types of public institutions during the same time period. (The source of that data can be found on page 26 of the College Board Trends in College Pricing 2019 report.)

The chart below shows that in 2008-09, per-student state and local funding for higher education, represented by the orange line, declined by 10.1% from the year before, and the annual declines persisted through the 2011-12 academic year. The blue line reflects annual changes in tuition and fees. The mirror-image effect of the two lines conveys that declines in state appropriations tend to be offset by increases in tuition and fees.

To put it simply, as states spent less on higher education, students are charged more. Although state and local funding for higher education has been increasing since 2012-13, both funding per student and total funding are below their pre-recession (2007-08) levels.

At private institutions, state funding accounts for a small share of total revenue, and it does not affect tuition in this sector the same way it affects tuition in the public sector. 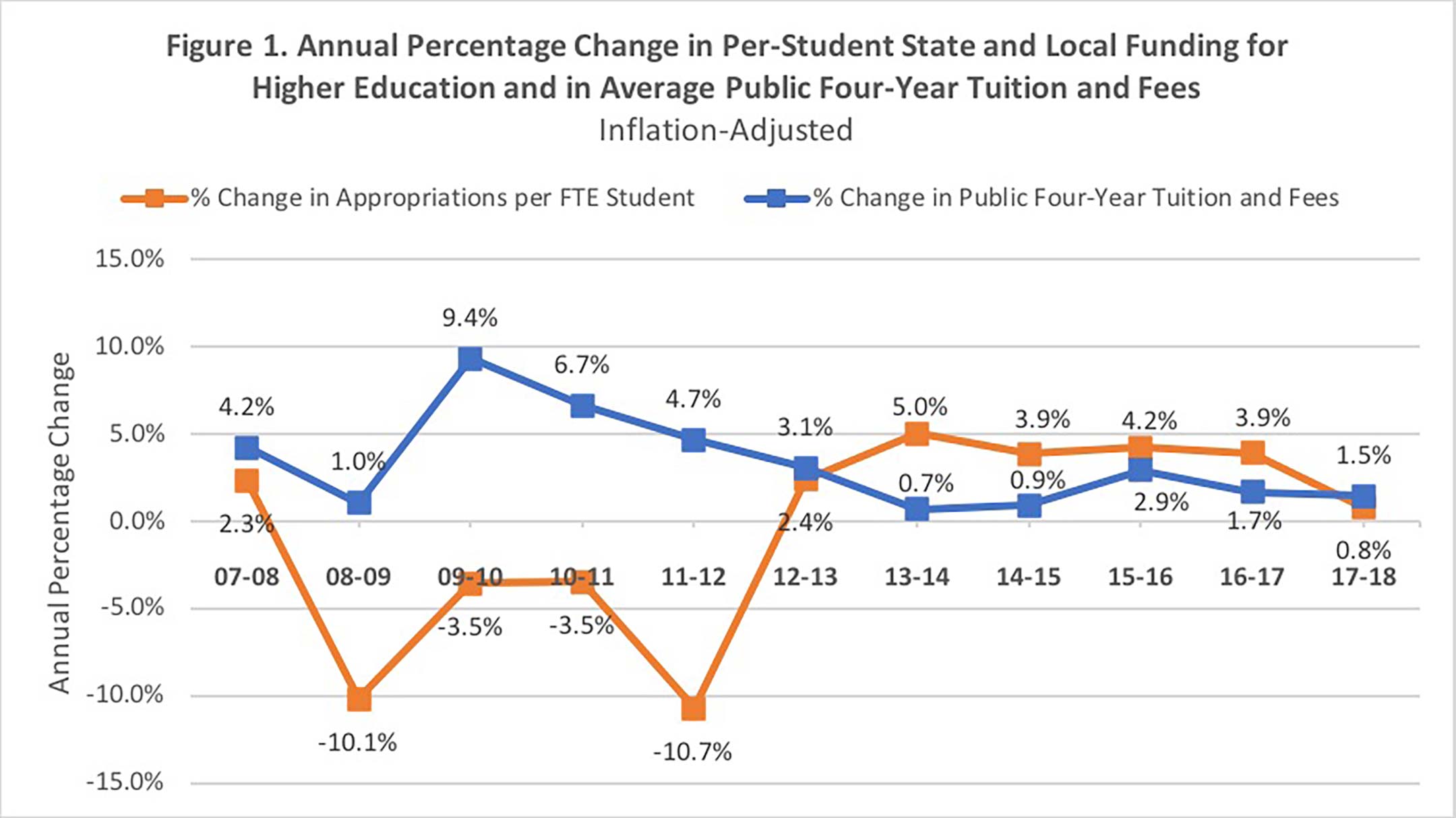 Source: College Board, Trends in College Pricing 2019, Figure 15A and Table 2

Enrollment at higher education institutions tends to be what economists call counter-cyclical. During economic downturns, jobs are scarce and the opportunity costs of attending colleges (such as forgone earnings) are low. Many students return to school to obtain more education and training. During the Great Recession, enrollment increased in all sectors of higher education, with for-profit institutions experiencing the largest increase in percentage terms. Since then, enrollment at community colleges and for-profit institutions has been declining and enrollment at public and private nonprofit four-year sectors has been stable.

What were some of the most important effects the Great Recession had on students in college or about to start college? Were they the same for first-time and returning students?

The Great Recession posed significant financial hurdles for many first-time and returning students as they experienced declining family incomes, declining housing values, and large tuition increases at their state institutions.

First-time students need to decide where to apply and enroll in college. In a recent study, we looked at the impact of sticker-price shock on college application behavior during the Great Recession. We found that students were less likely to apply to state flagship universities when there were large tuition increases at those institutions. This effect was evident for all students, even though several state flagships met full financial need for low-income students and the price these students faced after subtracting grant aid would have remained the same. 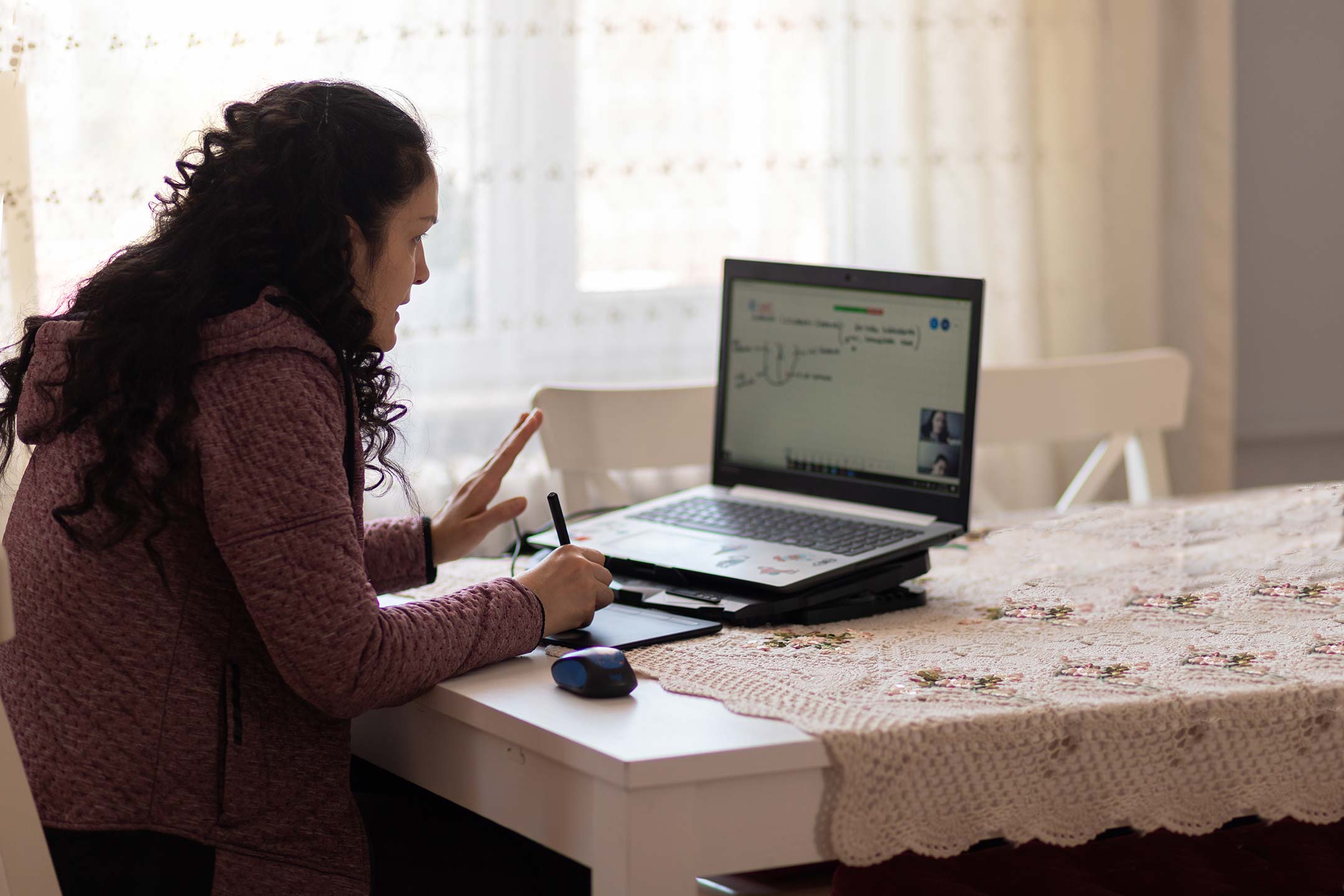 How many students will return to the physical classroom—and how many will opt to continue learning remotely—is an open question as schools prepare to reopen. Complicating the decision: millions of households are now struggling with uncertain finances.

For some returning students, they need to decide whether to reduce their coursework to save tuition dollars. Anecdotal evidence suggests low- and moderate-income students would often enroll part-time or stop while faced with large tuition increases. As a result, students are less likely to complete their degrees. A National Student Clearinghouse report shows that older and part-time students who started college in 2008 had lower completion rates than traditional-age and full-time students.

Some of this increased borrowing during and after the recession is reflected in the average debt of college graduates. Using the College Board’s Annual Survey of Colleges, we analyze the average debt among bachelor’s degree recipients. Our data show that 60% of college graduates who received their bachelor’s degree from a public four-year or private nonprofit four-year institution in 2012-13 had borrowed. Among those who borrowed, the average debt level was $28,700—$4,000 higher than those who graduated in 2007-08, just before the recession. In 2007-08, 58% of the graduates borrowed. (See page 21 of the Trends in Student Aid 2019 report.)

What did the federal and state governments do in response to the Great Recession?

During the Great Recession of 2008, the federal government took three significant steps:

It increased the maximum Pell Grant from $4,310 in 2007-08 to $5,550 in 2010-11. It implemented the American Opportunity Tax Credits, which expanded the tax benefits for higher education. And it provided stimulus funding for higher education through the American Recovery and Reinvestment Act of 2009. This stimulus funding cushioned the impact associated with cuts in state appropriations

On the state government side, many states cut their state grant aid program in addition to reducing state appropriations to higher education. In fact, as many as half of the states reduced the generosity of their state grant aid programs. (See Federal and State Financial Aid during the Great Recession, a study published in 2015 by Eric P. Bettinger and Betsy Williams.)

How does our present crisis compare to the Great Recession, with respect to higher education?

Like the Great Recession, the present crisis has caused many job losses and a great deal of financial and economic distress among Americans. In addition, state governments are experiencing budget shortfalls and will be forced to make budget cuts.

The present crisis is more severe than the Great Recession. It is more than an economic recession. It is an economic recession caused by a global pandemic. Many countries had to shut down to contain the spread of covid-19 and colleges and universities had to quickly move instruction online in the middle of the spring semester. Many colleges have yet to announce their reopening plans for the fall. Even if colleges are open, it is possible that some students may be reluctant to return in fear of a second wave of the virus. 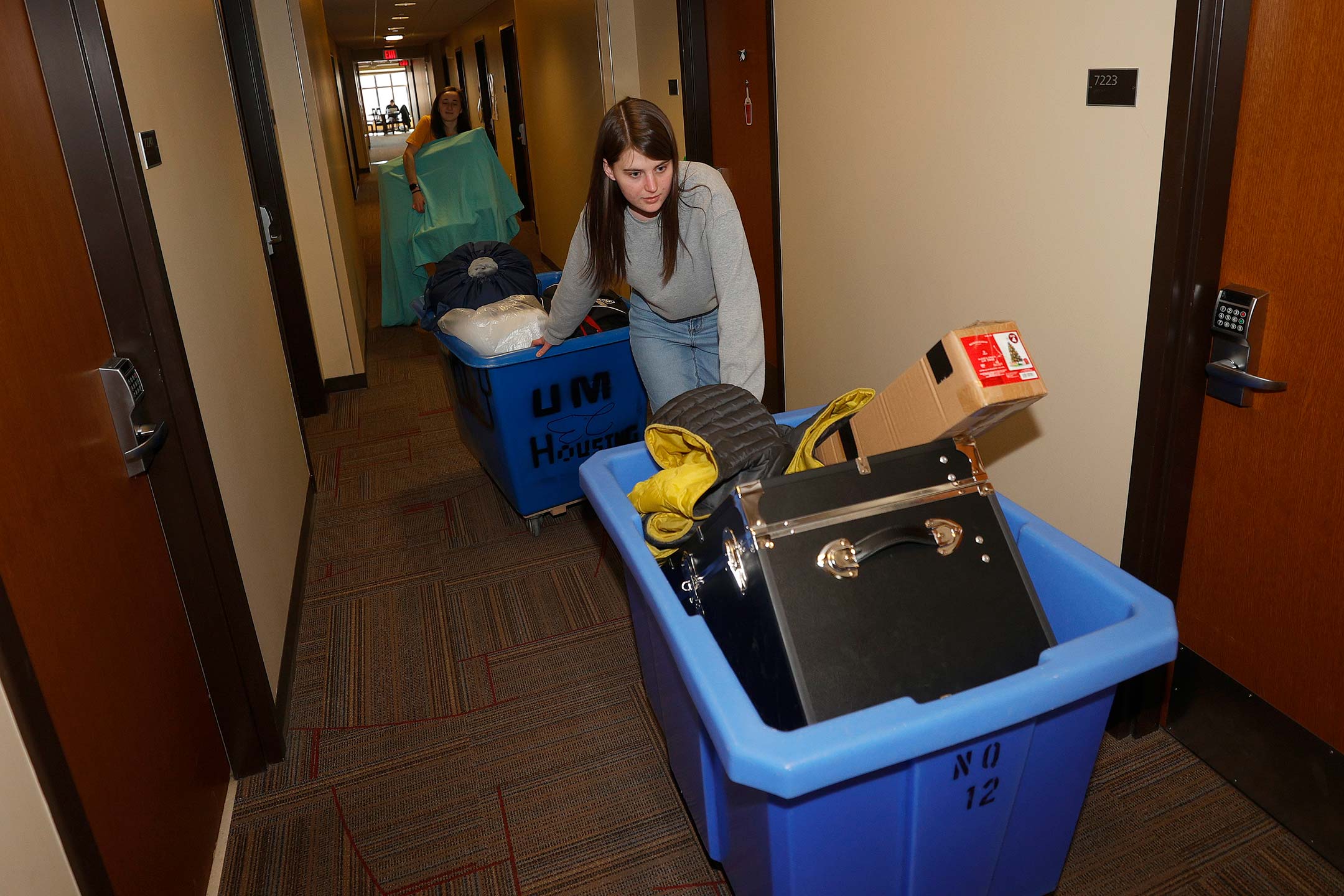 Lizzy Anderson of White Pigeon, Michigan, packs up and moves out of her dorm at the University of Michigan on March 17, 2020, in Ann Arbor, Michigan.

All these factors suggest there is much uncertainty about enrollment in the fall, both among domestic and international students. While some higher education institutions can admit and enroll students from their waitlists to fill the seats, others cannot. Small private colleges are typically tuition-dependent and particularly vulnerable during the current pandemic.

Results from recent surveys show that many college-bound students now prefer attending a college close to home. This may drive some students to local community colleges, where the price is lower. It is also possible that for-profit institutions may see an increase in enrollment because online instruction is the norm for that sector. (See Table 311.15 in the report Digest of Education Statistics 2019.)

What lessons have we learned—or should we have learned—from the Great Recession? What's the best way to avoid past mistakes or mitigate the harm of the inevitable?

Many states are facing severe budgetary challenges due to the pandemic. Several states have already announced higher education funding cuts as a result of budget pressures. The Great Recession suggests that public institutions will once again look to tuition increases as a possible way to manage budget. While tuition increases may be inevitable, higher education policy makers should ensure financial aid is available to lower-income students. Additionally, our research suggests that colleges and universities should be transparent about the amount students pay after grant aid and have a clear communication strategy with students and families.

Tuition increases for the upcoming academic year may not align with students’ expectations if the online instruction extends into fall. In fact, many students requested partial tuition refunds for the spring semester when instruction shifted online, declaring the quality of experience was not as good as in-person learning. Although research is scant on the effectiveness of online learning, there is some evidence that suggests online learning may have a negative impact on future labor market outcomes. (Stephanie Riegg Cellini and Nicholas Turner's 2018 study Gainfully Employed? Assessing the Employment and Earnings of For-Profit College Students Using Administrative Data is one source.)

Research supports the significant role a college education plays in generating lifetime benefits and weathering financial uncertainty. Education is key for social mobility and long-term success. As we navigate the current unchartered territory, it is important for states and higher institutions to work together to ensure access and success for all students—particularly low-income students, who may be most at-risk during times of financial (and health) crisis.

Words of Wisdom—and Celebration—for the Class of 2020