Midterm Prognostication, Missing Pawpaws, and Termite Hordes: Five Things That Made Us Smarter This Week

From common predictions to rare fruits, we learned a lot in the last seven days 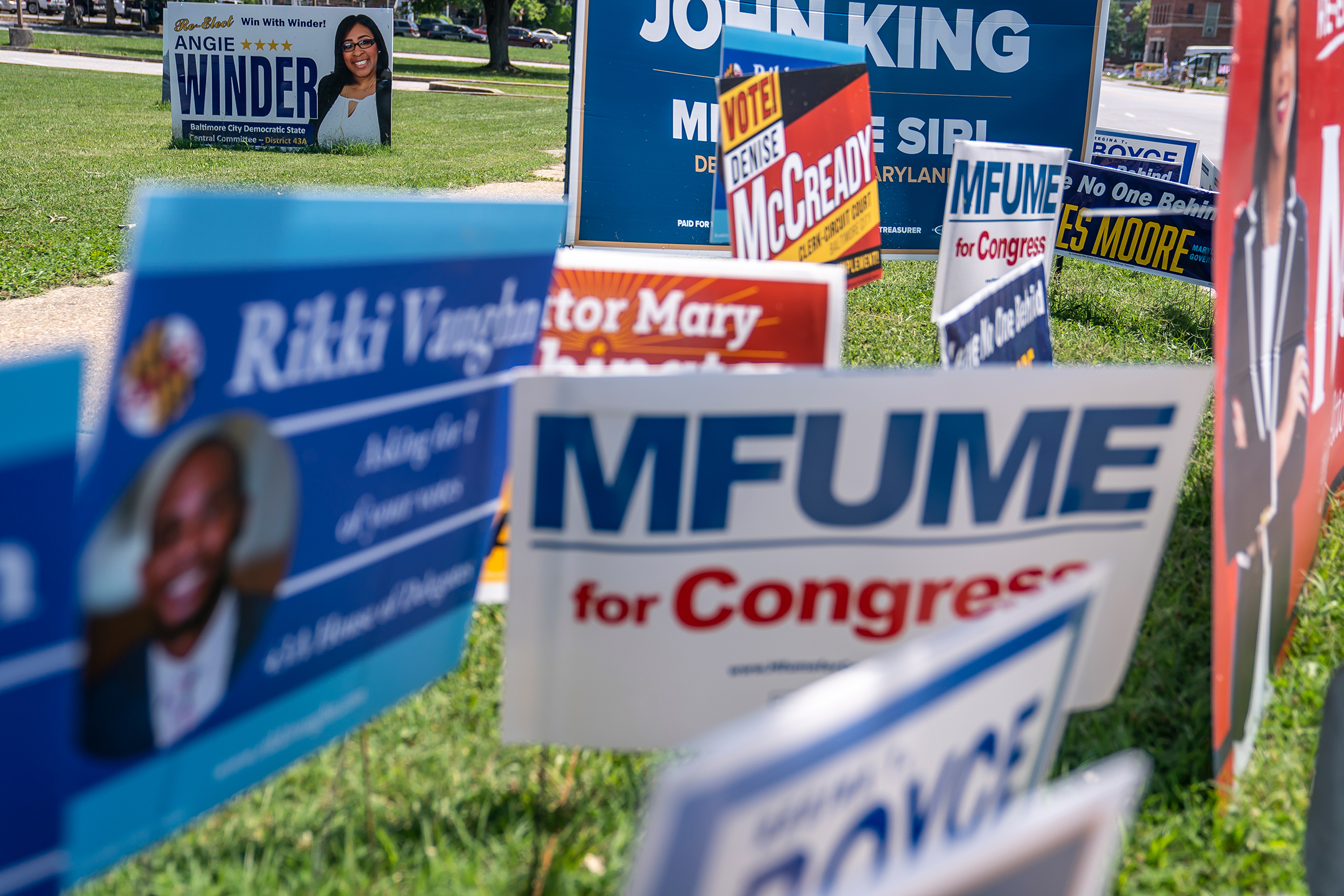 Campaign signs line the road near a polling place at The League for People with Disabilities during the midterm primary election on July 19, 2022 in Baltimore, Maryland.

One of Washington’s favorite parlor games is nearing its end (for now): midterm election predictions. With less than five weeks until Election Day, on November 8, everyone has a take on the factors that will (likely, maybe) inevitably shape the next two years of the country’s government: voter turnout, gas prices, the president’s approval rating, reaction to the Dobbs decision, inflation. FiveThiryEight’s Nate Silver—politics’ primo prognosticator—currently has Republicans with a 69% probability of retaking the House and Democrats a 67% chance of retaining Senate control. All that’s left to do is count the ballots, right?

Not so fast. Besides the issues, history can be a potent predictor of what to expect in this year’s midterms. The American Presidency Project reports that in the 22 midterm elections from 1934-2018, the president’s party has averaged a loss of 28 House seats and four Senate seats. On just three occasions over the same span, the president’s party gained seats in the House; in six elections they boosted their number of seats in the Senate. Amazingly, the president’s party has gained midterm seats in both houses only twice: during Franklin Roosevelt’s presidency in 1934 and George W. Bush’s in 2002. Both presidents were leading through major crises—the Great Depression; the aftermath of 9/11—and that leadership buoyed their party’s outcome. And how has the president’s approval rating factored in gains and losses? In the 1946 midterm election, President Harry Truman had the lowest job approval rating ever at 33%. His Democratic party lost a whopping 55 seats in the House and a substantial 12 seats in the Senate. But when President Bill Clinton entered the 1998 midterms with an approval rating of 66%, his Democratic Party nabbed only five additional House seats with zero gain in the Senate.

President Biden’s approval rating, while on the upswing since the summer, currently resides at 43%—much closer to Truman than Clinton. But these are atypical times, with the nation emerging from a pandemic, so what that number means for voter sentiment is tough to predict. History could repeat itself, or, if you believe Silver’s prediction or that the current makeup in the House and Senate will hold, we could see a unique result. Hopefully, we’ll find out on November 9, or November 10, or before the new Congress is sworn in in January. Given our election challenges, knowing when we’ll have results is also difficult to predict. —Karen Lanning 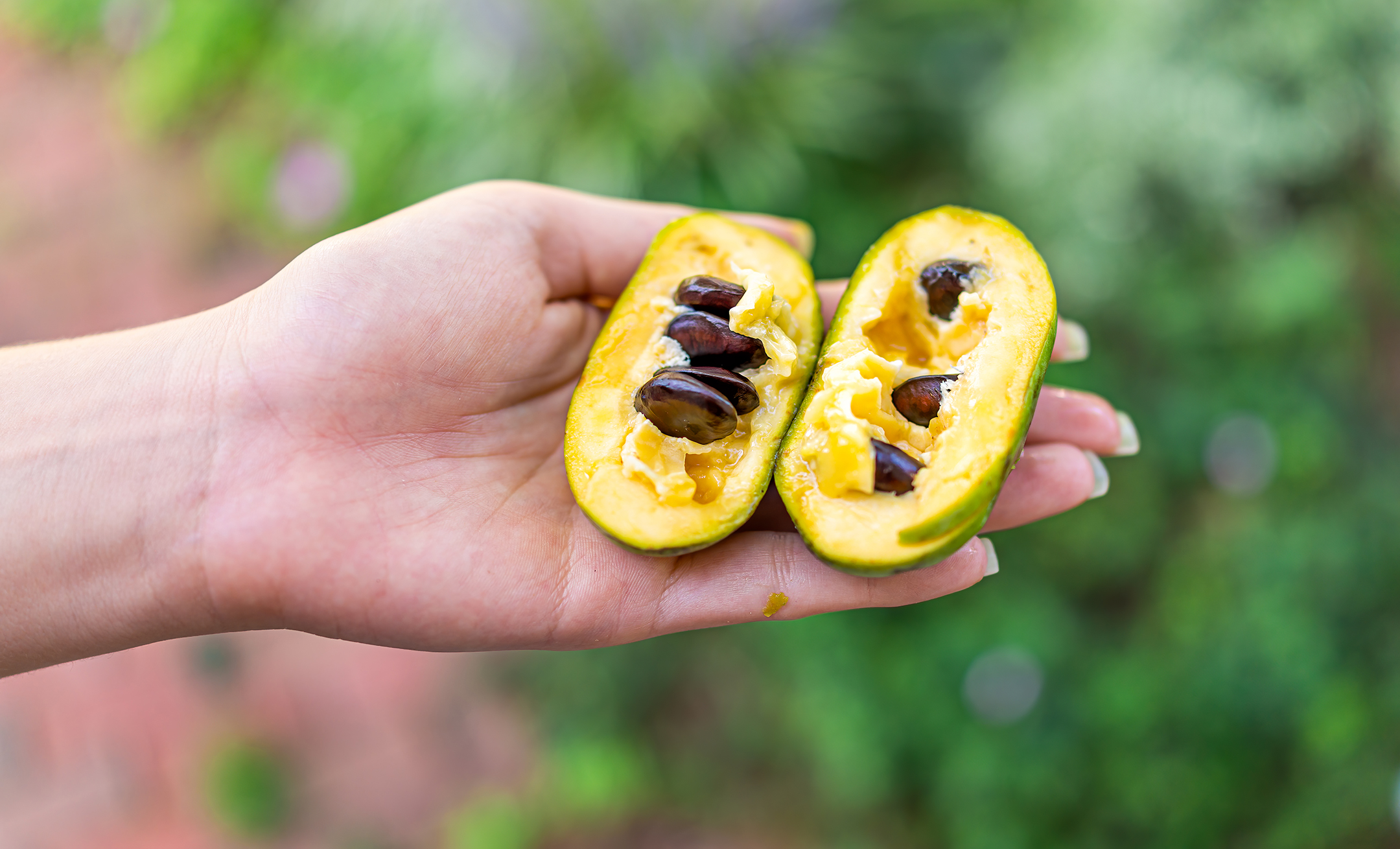 Looks good; would eat—that is, if I could find one...

Earlier this year, I started making regular trips to the Saturday farmer’s market by my house. It’s less than five minutes away, and what began as a pleasant walk slowly morphed into my weekly grocery run. I like that I can buy sustainable produce and even local bread, dumplings, and falafel. But it's also a matter of convenience. The nearest major grocery store is a 15-minute walk, so the farmer's market feels like less of a production when I don't need dry goods. I've been reflecting on the transition to autumn as tables of tomatoes have turned into bushels of potatoes, cucumbers into squash, and berries into apples. My thinking about this seasonal shift went to an unexpected place when I stumbled on a recent ode to the pawpaw in The Atlantic.

Pawpaws are not common grocery store produce. In fact, I have never seen them there. Until a few years ago, I didn't even know they existed. In case they’re new to you, too, pawpaws are small and ovular with yellow-orange flesh that taste a bit like a mix between mangoes and pineapples. They're found along the Eastern seaboard of the U.S. and in Canada. In fact, several pawpaw trees line the street on my walk to the farmers market. The Atlantic article helped answer the natural question of, if they’re so ubiquitous, why are they so conspicuously absent? First, they're only in season from August to early October. Second, they have a short shelf life—only three to five days before they decay. Third, it's hard to know when they are ripe, making harvesting difficult. Still, from town names to feeding Lewis and Clark, the fruit has a firm place in U.S. history. But what about its future? The Atlantic article suggested that in order for the pawpaw to become mass produced, researchers need to selectively breed the trees to cultivate tougher skin and better-tasting fruit. This process has already begun, but until it reaches scale, I'll look out for pawpaws at my farmers market. —Hannah Van Drie 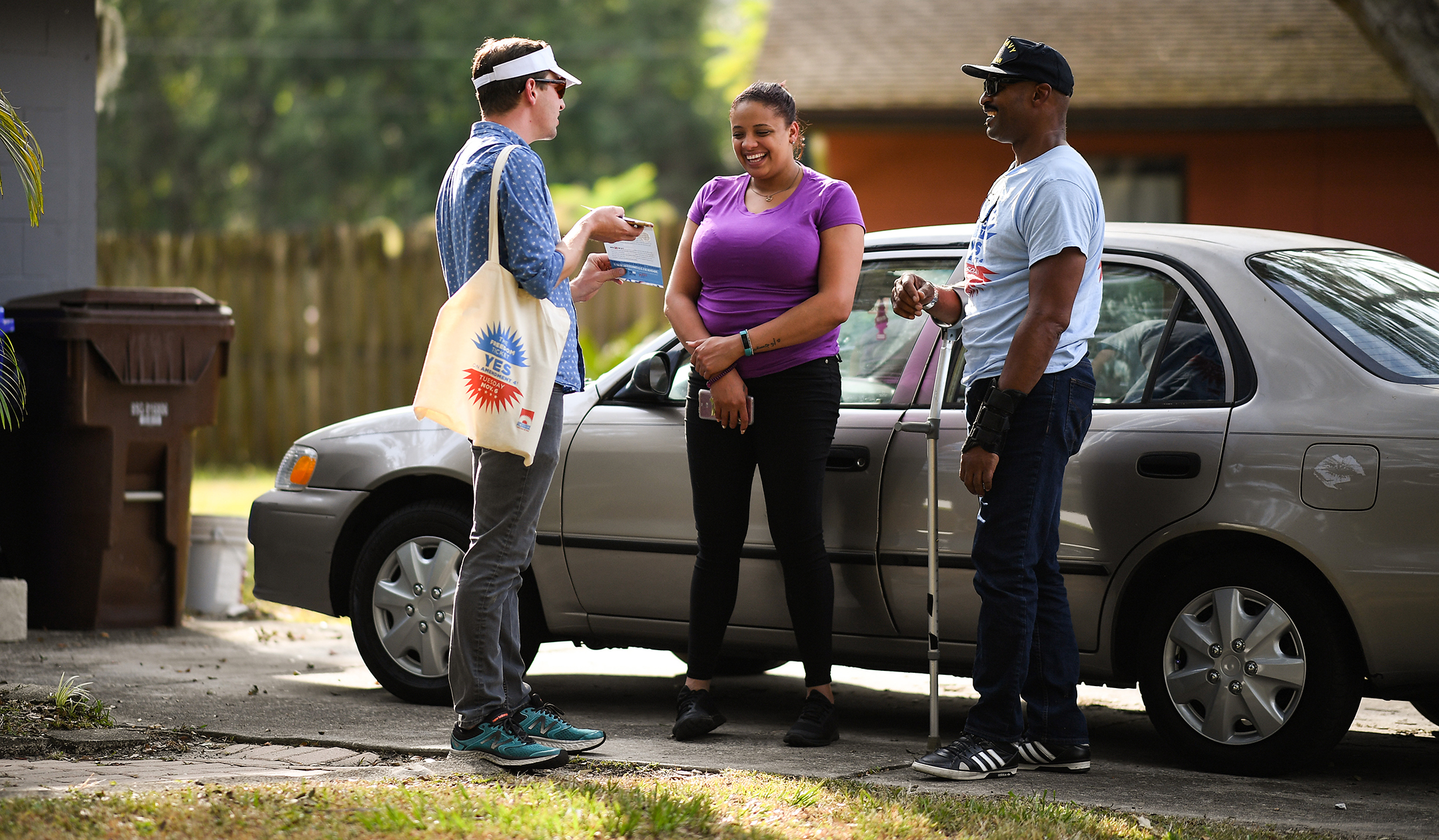 Navy veteran Rick Rogers canvases in support of Andrew Gillum on November 1, 2018 in Kissimmee, Florida. Rogers encouraged people to vote for Gillum and other progressive candidates because of his dependence as a vet on healthcare and social security.

At a moment when it feels like the last thing this country needs is more focus on politics, Furman University professors Jenna Silber Storey and her husband Ben Storey make a compelling case that political speech can be uniquely valuable in bridging our divisions. That's because political speech isn't just about personal expression, individual opinion, or airing grievances—it's meant to persuade, to take seriously the thoughts and ethical standing of people who disagree with you. Political speech, the Storeys argue, is what makes citizens. "The citizen is therefore a distinct kind of human being—someone who possesses both the capacity to lead and the willingness to follow the lead of others. As a leader, the citizen cultivates the capacity to rule others through persuasive speech, projecting a vision of potential action and its consequences that convinces the minds, inspires the imaginations, and animates the wills of his listeners."

That's a tall order for any argument, but that's precisely the power of political speech. It's crafted with a purpose, intended to bring about some action in the world to address a shared problem or settle a mutual dispute, and in that way it helps bring into existence a common community. Persuasive speech helps "transform the antagonist's warring passions into contending arguments," rendering disagreement into a form of negotiation, holding out the promise of progress instead of stalemate. "Political argument therefore begets changes in one's self-conception as one learns to imagine oneself in light of a larger whole," the Storeys write. Voicing your opinion doesn't really require any consideration of your listener, but trying to convince them to support your plan for political action means thinking hard about the people on the other side of an issue and finding respectful ways to appeal to them. It's a much more disciplined conception of free speech than what we often hear, a view of expression that centers not on the right to say whatever you want but on the necessity of convincing your fellow citizens to adopt a shared view. —Eric Johnson 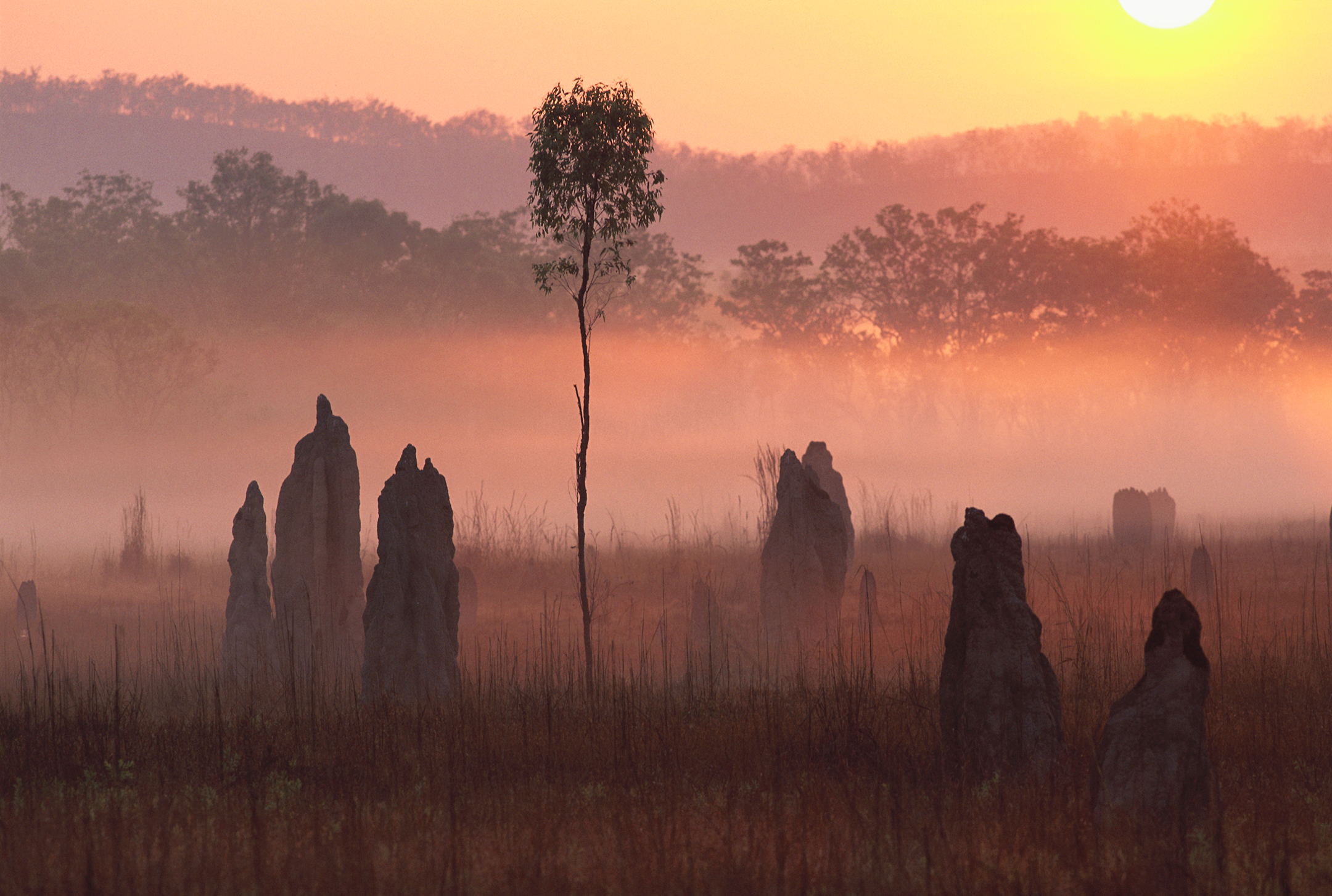 You go to bed one night, gazing in awe at the wide-open prairie that makes up your backyard—and the next morning you wake up to find new neighbors have moved in: mounds and mounds of termites.

When humans look up at a bright night sky (when they’re far from obscuring city light pollution, that is), we are continually reminded of the trillions of stars twinkling back at us from the vast expanses of the universe. But if we tilt our heads downward to look at the ground beneath our feet, chances are that, just out of sight, are an equally vast number of tiny terrestrial insects moving amidst the dirt and grass. (For those who’ve seen the opening scene of David Lynch’s Blue Velvet, you know what a horrifying image that inspires.) In short, there’s lots of them. Specifically, a recent study published in Proceedings of the National Academy of Sciences (or, PNAS), “The abundance, biomass, and distribution of ants on Earth,” estimated the number of living ants on Earth at around 20 quadrillion, or 2.5 million for every living person.

That mind bending number of ants made headlines, but they aren’t our only large-numbered insect planet-cohabitors getting noticed in academic studies. Termites have long made their presence felt in America by chewing through old wooden houses. Their optimal habitat, though, is the tropics, where their populations are greater and their tall dirt mounds are architectural wonders. The problem is that termites eat so much deadwood and other plant material that their feasting contributes to up to 3% of annual global methane emissions (their amazing mounds helping to control that number), per the 2018 PNAS article ”Termite mounds mitigate half of termite methane emissions.” But it’s ultimately temperature that controls the global spread of termites (and their greenhouse-enhancing eating habits) to the cooler regions of Europe, Asia, and the Americas. Now, according to a new report published in Science, global warming stands to make them more of a presence in once-temperate climates. Study data from 133 sites on six continents cited by the report found “termite wood discovery and consumption were highly sensitive to temperature (with decay increasing >6.8 times per 10°C increase in temperature)—even more so than microbes,” adding, “With tropicalization (i.e., warming shifts to tropical climates), termite wood decay will likely increase as termites access more of Earth’s surface.” Just another reason to go green—and help keep the earth cool—before the termite horde moves its mounds next door. –Christian Niedan 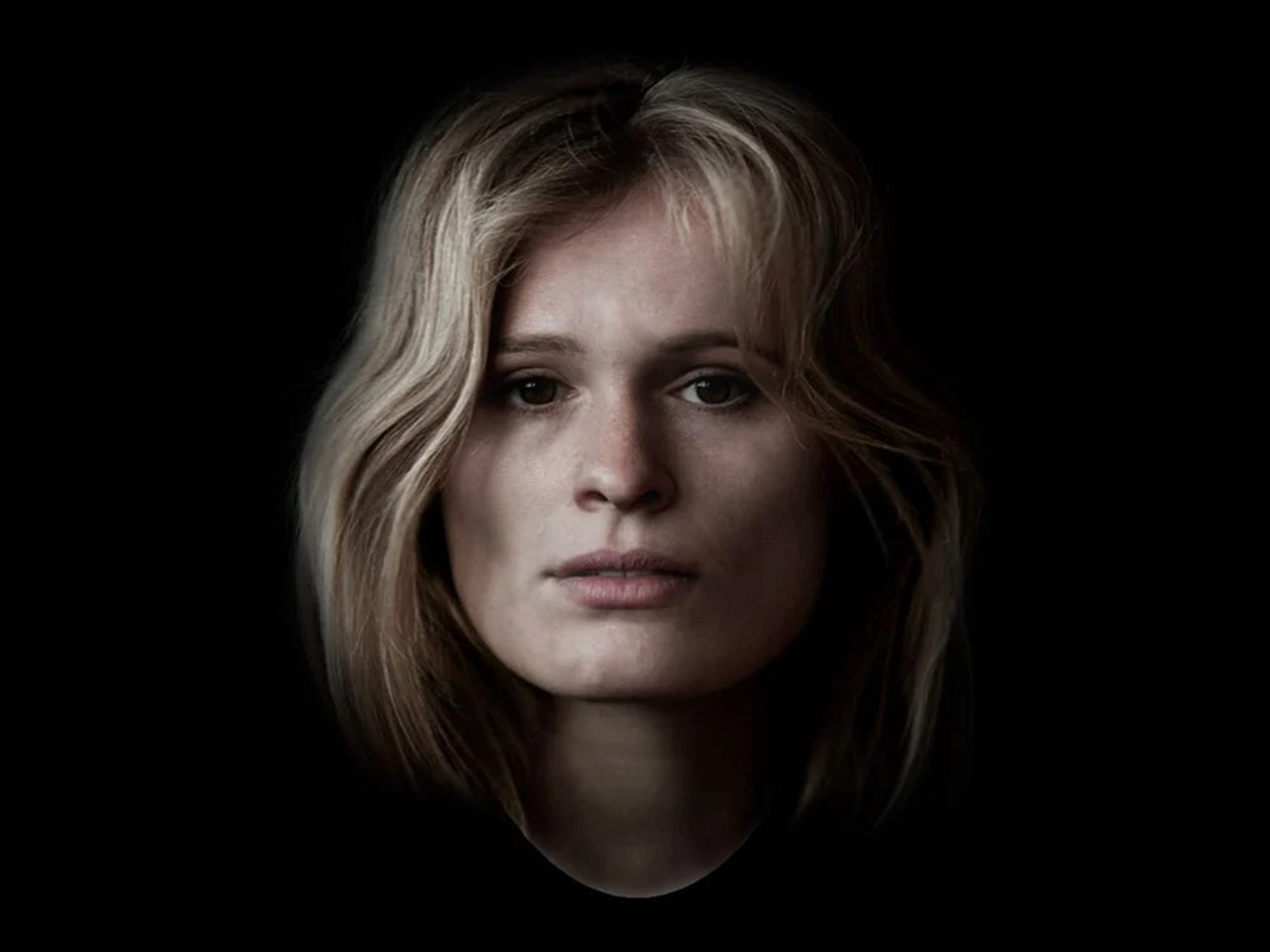 The uncanny valley is at its uncanniest when it uncannily resurrects medieval persons.

Tales of the Scots Tape

As a rule, I tend to avoid headlines with excitable words and phrases, like “shocking” and “you’ll never believe.” Rarely is, and yes I will. But something about this recent Smithsonian Magazine article, promising “Stunning Facial Reconstructions Resurrect a Trio of Medieval Scots,” got my attention. It might have been the lead image, above, of a woman who bears an uncanny resemblance to the very-much-in-the-21st-century actor Gemma Arterton—these sorts of stories typically have visuals that look like 3D scans of Natural History Museum diorama people. So click the link I did, and I was actually shocked by it. Not the story, per se, which focuses on how scientists, researchers, and forensic artists recreated what three skeletons, found in a medieval Scottish crypt in 1957, looked like when they were alive in the 13th century. Rather, it was the results of the work. Yes, the image of the woman, but there are also process animations—two published on Instagram—showing how the team began with the skulls and added layers of eyes, musculature, and skin to resurrect Bishop Walter of Whithorn and a cleric. And then the 13th century Scots start looking around! And reacting! (I may have actually gasped.) It’s like these people have been brought back to life and were gazing at us not only across the centuries but the uncanny expanse of digital existence. We’ve come a long way from piecing together what Lucy may have looked like. And is there really any doubt that one day, thanks to AI and machine learning, these same teams of scientists, researchers, and forensic artists will be able to give their recreations voice, personality, and character? What then? Is that immortality? Needless to say, I was thoroughly stunned and unprepared for clickbait to send me down an existential rabbit hole. But now that I’m in it, as many people as possible need to tumble down, too. Or at least watch the animations and have your cork popped. —Dante A. Ciampaglia