School Days Influences: From the Desk of the New Yorker Cartoon Editor

Emma Allen shares her education experience, tips for aspiring cartoonists, and what it’s like reviewing 1,000 single-panel cartoons each week

For nearly a century, the weekly New Yorker magazine has been a launchpad and regular home for cartoonists and humor artists—among them James Thurber, Saul Steinberg, and Roz Chast. And for the hundreds who have found their work printed by the magazine—always one panel, always pen and ink—many, many more have tried and failed to break through the publication’s famously rigorous vetting process.

But in recent years, things have loosened up, if ever so slightly. Since 2005, the magazine has run its popular Cartoon Caption Contest, inviting readers to complete the punchline of a cartoonist’s work. And since 2012, artists who don’t make the competitive cut for the magazine’s weekly print edition have seen their work featured within the online Daily Shouts—a section that has grown increasingly popular as the work is shared on Instagram and other social media.

So who actually decides what cartoons make the cut? That would be Emma Allen, who has been The New Yorker cartoon editor since 2017. She got the job when she was 29, after working at the magazine for five years, taking over from predecessor Bob Mankoff, who left after a 20-year run.

Allen spoke with The Elective about useful professional habits and hobbies that she developed during her high school, college, and post-grad days. She also had some advice for young artists who want to one day submit their own cartoons for publication in The New Yorker.

Where did you go to high school? Did you have any hobbies or habits during those years that now contribute to your job as Cartoon Editor?

I went to Brearley, an all-girls school on the Upper East Side, which I actually attended for 13 years, with the unfortunate mascot of a beaver. My best friend in high school started secretly performing stand-up and eventually revealed this to me, so I spent a lot of time at open mics learning about just how bad “bad” comedy can be. I also obsessively cut out all the cartoons in The New Yorker and kept them in a neon green folder. Not sure how much I learned from that, beyond superior scissor skills and that I’m a bit of a nut.

Where did you attend college, and what sorts of skills did you develop during your time there that you utilize now?

I went to Yale University and was a double major in English and studio art. I was lucky enough as an Arts and Living editor at the Yale Daily News to work on funny columns by humorists who are now killing it—Will Stephen, Ethan Kuperberg, Claire Gordon, and others. In the art major, I figured out that I wasn’t particularly good at making art, other than funny collages, but that I loved crits, in which I got better at talking constructively about other people’s work.

Looking back, was there something unique about your particular campus environment, geography, or regional culture that impacted the development of your skills?

There are some incredible art galleries in New Haven. Both the Yale University Art Gallery and the Yale Center for British Art are insanely high-caliber and packed with inspiring stuff. There was also a thriving comedy scene at Yale, with lots of really great troupes, notably, in my time, Just Add Water, which had performers like Will Stephen, Allison Williams, and Andrew Law. 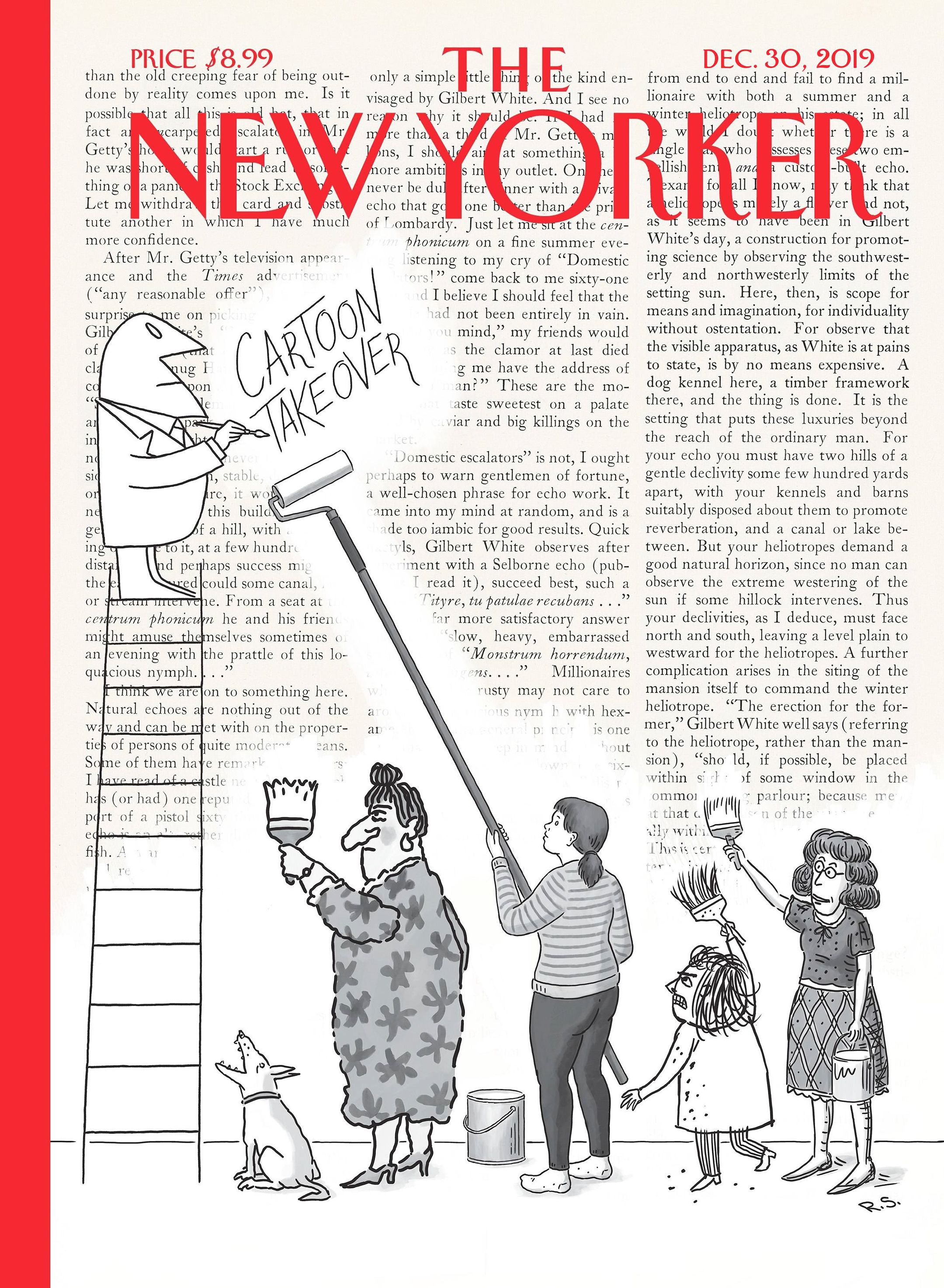 How long after graduation did you begin contributing to The New Yorker? Did you develop any habits or skills in the interim that you utilize now?

About two years out of college, I came to The New Yorker as the assistant to Susan Morrison, the magazine’s articles editor. In the preceding two years, I fed my voracious appetite for comedy, just going to tons of shows and trying to get a sense of the landscape. I also worked for various art-world publications, writing pieces that lampooned the weird, insular art scene. So, basically, without really intending to, I just got really into thinking deeply about art and comedy and the directions both fields were moving in, and what in each medium made me laugh.

What sorts of artistry and humor do you look for in prospective New Yorker cartoons that you consider for publication, either in print or digital?

What I look for is work that surprises me, that catches me off guard. Given that I review around a thousand single-panel cartoons each week, in addition to many dozens of longer comics and written humor pieces, most of what I encounter is familiar in some way. When something truly original—either stylistically or in its conceit—comes along and elicits a real laugh, that’s the best. Too many people, starting out, try to imitate what they imagine a New Yorker cartoon or humor piece is, and they make work that’s safe and a bit dull. You’re much better off mining the hyper-specifics of your life for original observations.

Do you have advice for young cartoonists about productive ways to engage with The New Yorker's rigorous cartoon submission process?

Submit! Don’t be too precious and stressed out about making everything perfect before you show it to people. Be brave! Include submissions that you’re not sure about. And also try to cultivate a community of people around you who are interested in comics, cartoons, and comedy. Let them be your sounding board and also your support network as you (inevitably—sorry!) face a lot of rejection.

This interview has been edited and condensed for length and clarity.

School Days Influences: Inside the World of New Yorker Cartoonists

Sharpening Our Pencil History, From Yellow to No. 2