About 95 miles east of Atlanta sits Oglethorpe County, a rural Georgia community whose economy is powered by cattle and sheep. The farmers who live here grow their own hay to feed their livestock, but increasing costs, particularly of fertilizer, have forced some to find alternative means of sustaining their herds.

Enter a biofertilizer of chicken-plant waste material nicknamed “sludge.” Some Oglethorpe farmers acquire the stuff without really knowing what’s in it and dump it on their fields. You’d know who used sludge by the foul smell, which concerns the farmers who avoid it. “There’s a big issue every summer about the farmers who use this and the community who rise up against them,” says Andy Johnston, managing editor of The Oglethorpe Echo. “Because the way state laws are written, it’s permissible [to use sludge], so local law enforcement doesn’t have any teeth to police this.”

That makes the reporting done on the issue by The Oglethorpe Echo vital to its community. But the Echo isn’t a run-of-the-mill local paper. Last year, the 148-year-old, 2,200-circulation weekly was in danger of closing. But a non-profit formed by a graduate of the University of Georgia’s Grady College of Journalism and Mass Communication saved the Echo, which is now staffed largely by journalism students. They are the ones on the ground doing the tough and necessary work to inform residents and hold public officials accountable through stories like the ones it has published on Oglethorpe’s sludge problem. 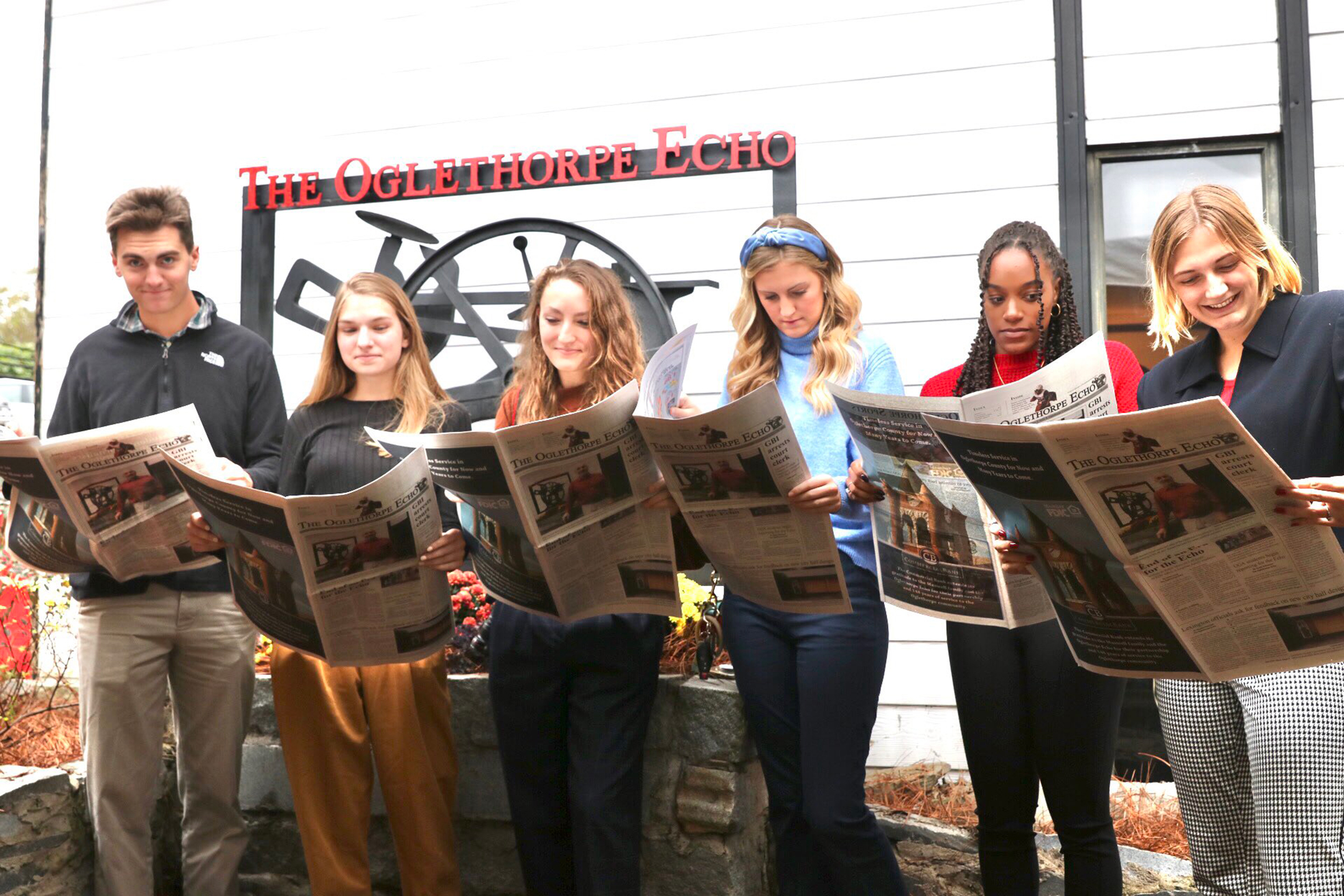 Grady College of Journalism and Mass Communications, University of Georgia/Twitter/@UGAgrady

Student journalists examine their work in the first issue of the relaunched Oglethorpe Echo, in early November 2021.

"One of the key challenges that student media across the board has is a lack of funding,” Francine Huff, SJN Director of Journalism School Partnerships, tells The Elective. “A lot of these students are just volunteering their time, but they're expected to put in significant chunks of time. So $10,000 is an amount that we feel allows the schools, whether they're a larger program, or a smaller program, the opportunity to, in some instances, pay students to work for the media outlet."

That kind of monetary infusion is invaluable at a publication like the Echo, which had eight interns this summer. “Those are students who are getting real world experience every week,” Johnston tells The Elective. “They are writing stories, they are taking photos, they are doing video. We are even doing short video. We started basically all the social media accounts for the newspaper. We started a website for the newspaper.”

It's an especially vital lifeline at a crucial moment for student journalism. In a nation of shuttering newsrooms and expanding news deserts, student newsrooms can be journalism’s last stand in a community. In Ann Arbor, Michigan, for instance, The Michigan Daily, an independent publication run by University of Michigan students, is the only daily paper covering the town. And as more communities come to rely on these publications, efforts are underway to ensure these reporters and editors have the tools and skills they need to do their jobs and fulfill their missions.

The SJN grant is one such program. But more than taking some of the financial pressure off in the short term, the Student Media Challenge is aimed at building more robust and resilient solutions-focused newsrooms in the long term.

“Students who come through the newsroom, whether it's this year or next year or the year after, are really being asked to put some sort of plan in place so that students themselves will be directly involved with continuing to mentor and train students going forward,” Huff says. “It was important for us to connect more directly with students and really have an eye toward starting earlier, to get people interested in solutions journalism and understanding why it is important to cover stories from this type of framing.” 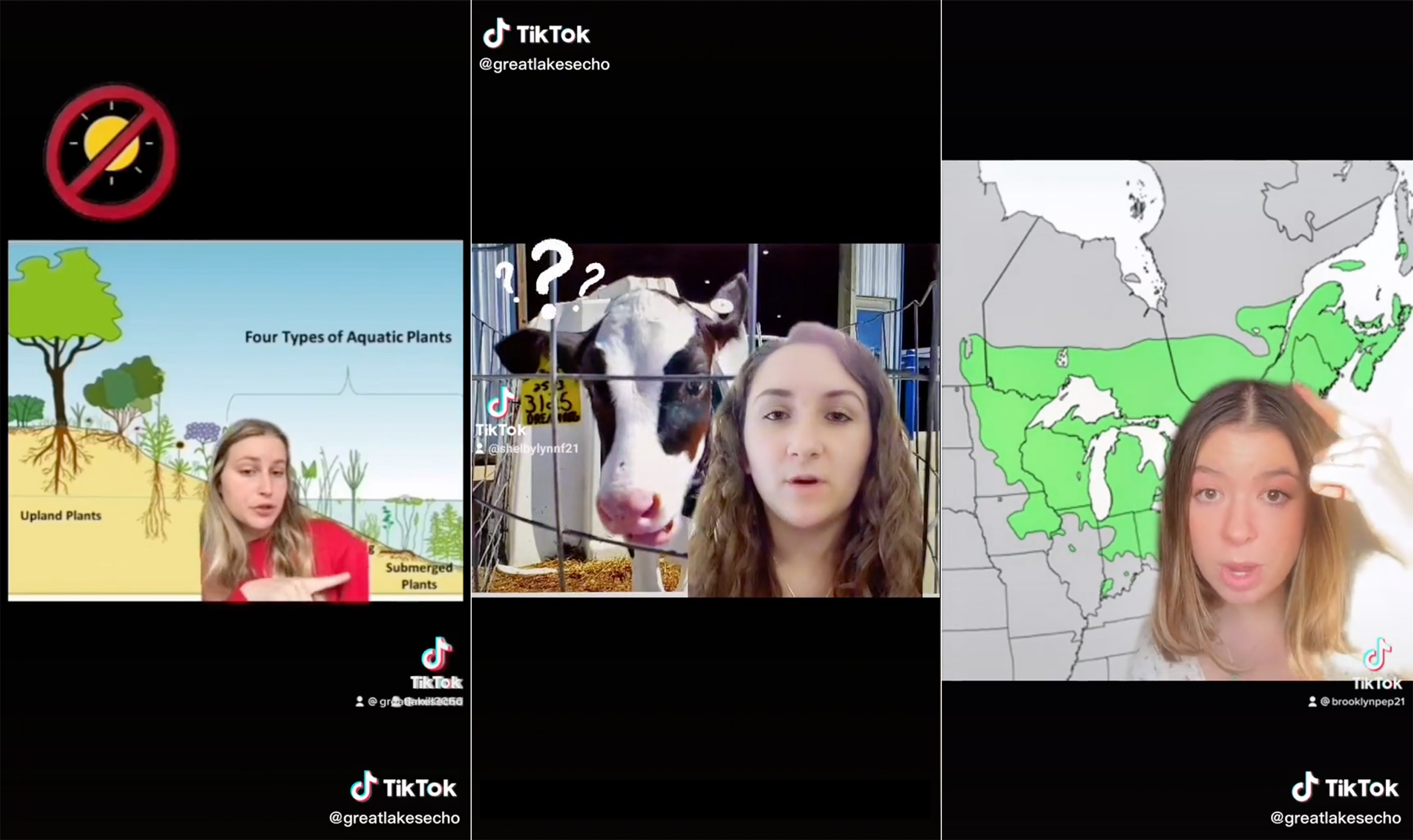 Great Lakes Echo student journalists, like these three, have been increasingly using TikTok to make short yet substantive explainers of research that impact their community.

“Solutions journalism” is a relatively new term for an old concept. As defined by the SJN, which was founded in 2013, it offers “rigorous and compelling reporting on the responses to social problems,” which helps student journalists “navigate [education] debates, bring fresh angles to their reporting, and go beyond the political fights that dominate education news.”

For David Poulson, Senior Associate Director at MSU’s Knight Center for Environmental Journalism, which means looking at and reaching communities through “non-traditional platforms.”

Poulson tells The Elective that some of its services, like Great Lakes Echo, are used in the classroom but then picked up by journalists across the Great Lakes region. The Knight Center’s Student Media Challenge proposal focused on solutions-oriented coverage of environmental issues, particularly around climate and food systems, using those tools. But, he adds, the money will also be used to build out new capabilities.

“[Our application] happened to coincide with some experimental work we were doing in the classroom, where we were using TikTok as a platform,” Poulson says. “We teach this concept called 'study to story,' where you take a scientific study and turn it into a story that’s palatable to the general public. Then we did something called 'study to TikTok’ where I challenged my students to create a TikTok, 90 seconds or less, that's relevant to a study that they’re trying to distill. It's a tricky, difficult thing to do. But we had a lot of fun doing it, and we had a fair amount of success. So we put a pitch in there to report using a solution lens on TikTok.”

Far to the west of Michigan, in Eastern Washington State, the Murrow News Service at Washington State University will use its grant to tackle a variety of topics. Grounding that work, says Lisa Waananen Jones, a clinical assistant professor at the Edward R. Murrow College of Communication, is a dedication to reporting on rural communities in Washington and Idaho.

“One really important component of our project this year is a focus on arts and culture,” Waananen Jones tells The Elective. “A lot of our students are coming from big cities on the west coast, Seattle, and California. They've never been to tribal lands or a Native reservation. They've never seen that there can be long-standing and vibrant Hispanic culture in places like Idaho. So that's something that we're really trying to focus on: arts and culture, and how that fuels the unique identity of a lot of these smaller places.” 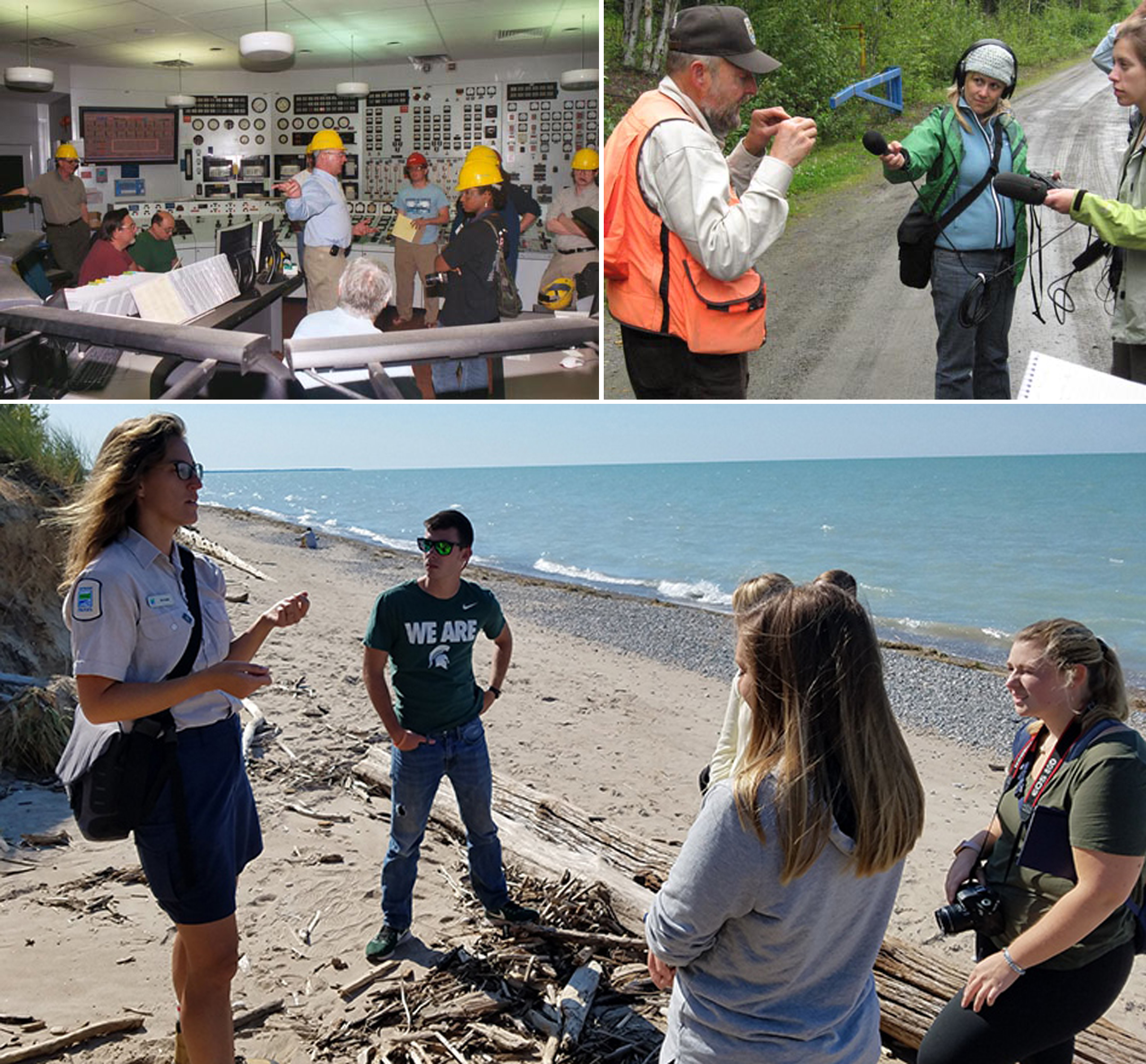 Knight Center student journalists (clockwise from top left) inside the control room of a coal-fired power plant, learning about forest impacts of climate change in Alaska, and discussing various marine fauna on a Lake Huron beach.

Challenge newsrooms in more urban areas, like Queens University News Service at Queens University of Charlotte in North Carolina, have likewise embraced a solutions approach to their journalism. Editors and reporters alike have seen how their work can resonate well beyond the campus and help non-student media become more robust chroniclers of their communities.

"Basically, we are a news organization that writes stories that different news outlets later on pick up,” Palmer Magri, one of the managing editors, tells The Elective. “This year, we had a Charlotte Observer exclusive about churches being repurposed into restaurants. The Charlotte Observer came to us and asked us to specifically write this story only for them. We worked on it for about three months or so, and once we were finished with it, we sent it to them, and they were very happy with the project."

For Magri and the Queens newsroom, that kind of recognition is exciting. “We work very hard, and a lot of times, because we are a smaller school, we don't get noticed.” Magri says. “But I think now, with all the stories that we are publishing, we are really getting a lot of attention.”

Student media face many large hurdles, from institutional interference to uncredited use of their work by more mainstream outlets. But programs like the Student Media Challenge show there’s more focus than ever on the fate of these newsrooms.

“With the [SJN] grant that we got,” Magri says, “things are really, really working out.” She might have her own newsroom in mind, but she could easily be speaking about countless student journalists across America.