A Teacher Describes His TV Lesson

In the Winter 1961 issue of the College Board Review Archive, an English professor explores the benefits—and drawbacks—of relying on technology to reach students

With so many students and teachers having had their real-life classroom replaced with Zoom, Skype, FaceTime, or any number of other video conferencing services, a national conversation is beginning about improving remote learning and whether it can ever be more than a short-term solution to a once-in-a-lifetime experience. The early results seem to say no—or, at least, not yet. Teachers complain of impersonal interactions with their classes, unreliable connections make it difficult to sustain conversation, and far too many students don’t have access to the technology necessary (computers, mobile devices, high-speed internet) or the quiet space necessary for this kind of learning. (There’s also a growing body of evidence that our brains simply aren’t wired for sustained video conferencing.)

A lot of that would have sounded familiar to Leonard Wolf, an assistant professor of English and humanities at San Francisco State College, who experimented with teaching a class via television—in the early 1960s. The College Board invited him to try it out and he wrote about the experience in the Winter 1961 issue of the College Board Review. And some of his initial reactions to taping the lesson echo how some teachers talk about teaching remotely. “Moment by moment I looked in the faces of the technicians for the kinds of cues that I get from my students, but in vain,” Wolf wrote. “They had other things to attend to. As I spoke I felt myself hardening toward a polite rigidity. On the whole, I tend to enjoy students and I am more than likely to have occasion to smile at them. I doubt that my own students, if they should chance to see me, will recognize me on the screen. In all that half-hour lesson I think I was able to manage one timid, if not downright sickly, smile.”

Reading Wolf’s account today is fascinating, not only for how forward-looking the TV class experiment was but also for how closely Wolf’s results parallel those of his 21st century counterparts. He called teaching by television “interesting” but ultimately concluded that the technology could only get students part of the way to where they needed to be. In the end, they still needed a warm-bodied, flesh-and-blood human being to do the work a cold, calculating machine cannot. 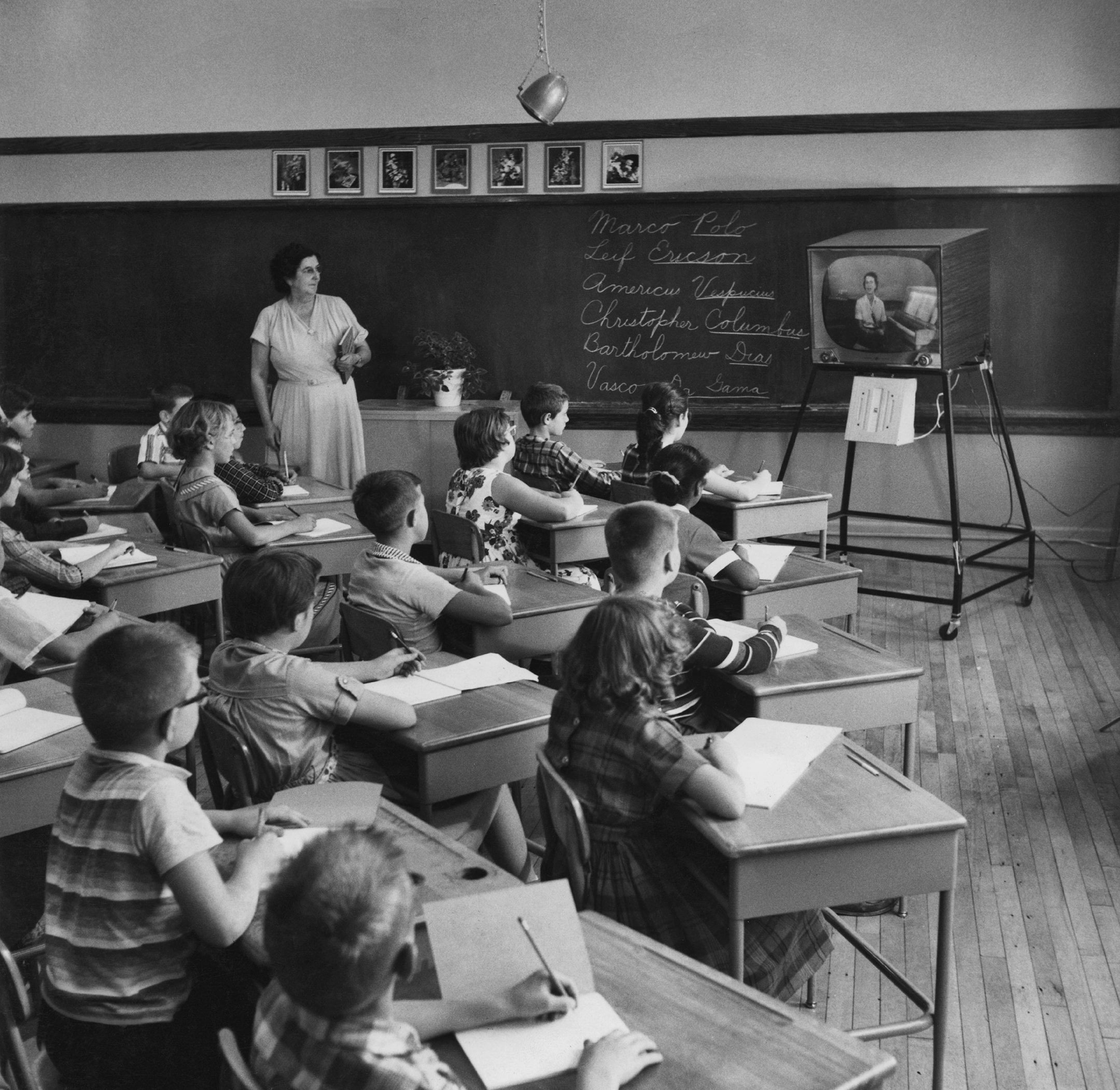 Schoolchildren watching television during a lesson, circa 1960.

Very recently the Commission on English of the College Board invited me to make a kinescoped lesson to be used by teachers of English as a basis for their own discussions of a poem. That lesson has recently been filmed. Because the experience of filmmaking turned out to be so interesting to me as a teacher, an account of my reactions might be valuable to teachers who may see the film.

In retrospect, I see that my ideas fall into two categories: the first concerns the television teacher—the problems of teaching by television, its special virtues, and so on; the second concerns the uses to which filmed lessons can or should be put by the classroom teacher.

Probably the mechanics of filmmaking produced the greatest personal shock. Moments after the lesson was filmed, I was taken to a small viewing room where a 24-inch television set was turned on and what I had just done was revealed to me. I saw myself, with a somewhat strained look on my face, looking out of the television screen, talking about Shakespeare's Sonnet 73—promising to talk about it as I would in my own classroom. For half an hour, I watched myself "nervously, earnestly, and seriously" trying to keep that promise. If what I did on that screen is useful to other teachers it will be because I tried to say of the poem exactly what I really felt. But, because I was not in my classroom, the plain truth is that I was hard put to recognize what went on on the screen.

The television teacher is a lonely figure. If one accepts the notion that the three essentials for teaching are students, information, and insight, it is easy to see how the teacher in the studio is unfulfilled. However informed, however luminous his judgment, however passionate his presentation, the teacher in the studio remains alone. Without students before him he must depend for the development of his ideas on a memory of the ways in which he was effective in the classroom. Unable to follow the sure guide of living students seated before him whose casual arm and eye movements, whose very posture, help him to pace himself, he struggles to get said what he knows needs saying.

The television studio at the moment of filming is a fearfully busy place. Instead of students, what I had before me were lights, cameras, and technicians. That relaxed classroom teacher who lives somewhere in my head as an ideal and whom I endeavor to approximate—that ideal teacher faced with cables, TelePrompTer, lights, and microphones became stiffer and stiffer as the lesson proceeded.

Moment by moment I looked in the faces of the technicians for the kinds of cues that I get from my students, but in vain. They had other things to attend to. As I spoke I felt myself hardening toward a polite rigidity. On the whole, I tend to enjoy students and I am more than likely to have occasion to smile at them. I doubt that my own students, if they should chance to see me, will recognize me on the screen. In all that half-hour lesson I think I was able to manage one timid, if not downright sickly, smile. 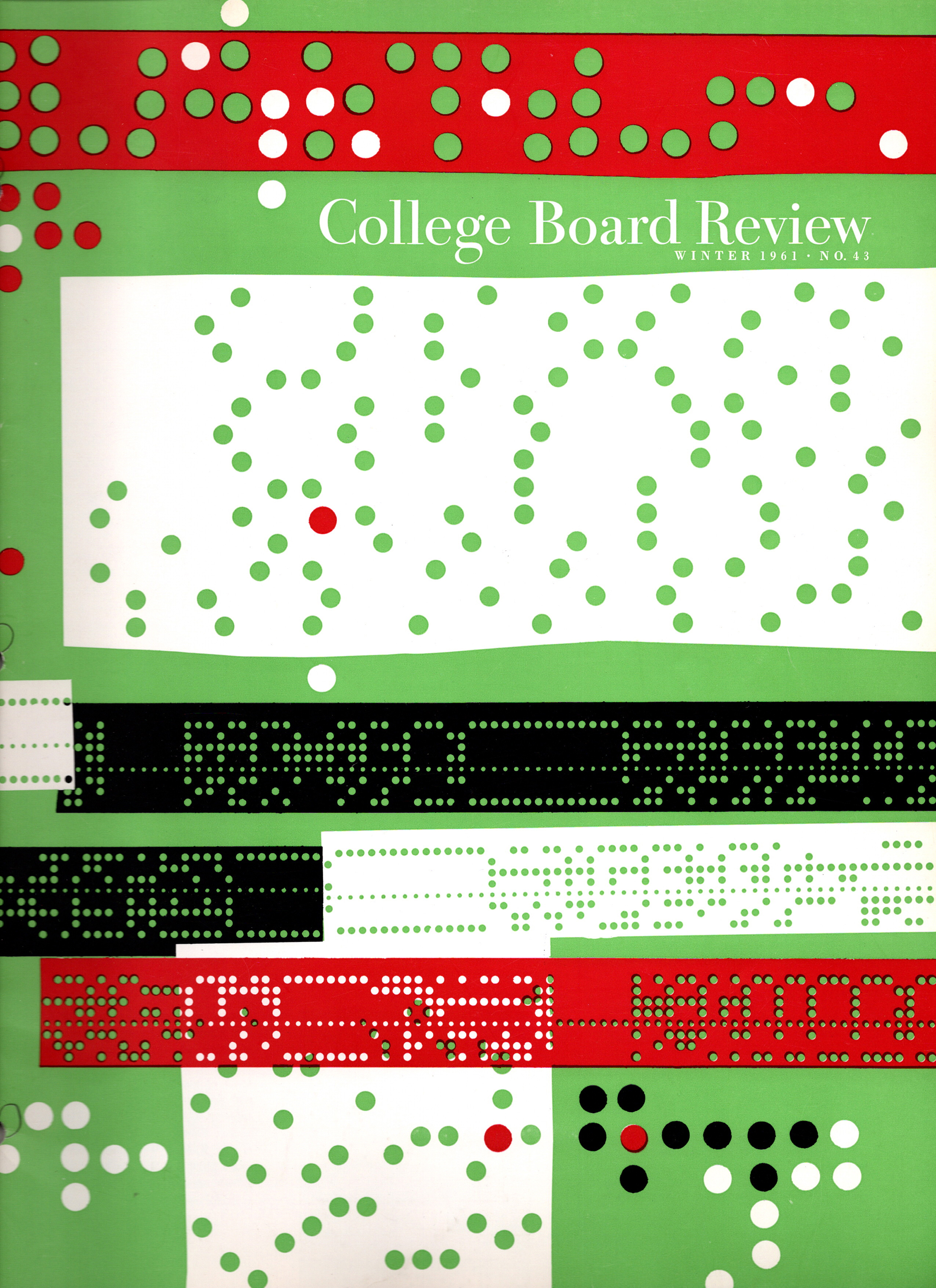 The imperious TelePrompTer cuing device deserves a few words here. The lesson, exactly as I had written it, had been typed on a long roll of yellow paper in large block letters. This roll was inserted into the machine. At the moment of filming, the roll began inevitably to unwind and those words, which I had with such care arranged and balanced in my study, began to rise before me at a mindless pace. The speed with which the unwinding proceeded was governed by an intelligent young man to whom I was unable to convey my despair once the filming began. In any event, like all the technicians, he was very busy. On some occasions he was unwinding me on metrics while I was still trying to refine myself on style.

There are other technical problems that confront the television teacher. He must learn to control his movements and must be prepared to revise his script to meet the needs of the studio. But I do not want to overstress the difficulties. They are in any event either surmountable or worth struggling with.

A valuable but difficult medium

The surprising truth is that I am thoroughly convinced that television teaching is possible and valuable. If I have stressed some of the negative aspects of my encounter with the medium, it is merely to emphasize the difference between the teaching experience in the classroom and that in the studio. My own experience has served to persuade me that both kinds of instruction need to exist.

The teacher who may be asked to conduct a television class will never, I believe, be able to compensate for the fact that he must work without students. This is the singular, the particular, the worst aspect of television teaching and I think it should be accepted as part of the definition of the new mode. But anyone who has ever been to a movie, or who has watched television in his own home, will know at once what vast capacity for information and interest and delight the television or movie camera can offer. To put such a vast technology at the fingertips of the teacher is to give him a tool whose merits need hardly be stressed. What can be stressed is the value of the added discipline of time which the limitations of studio program planning impose.

Few teachers can or should make their lessons come to a pinpoint stop with each idea, each appropriate observation precisely covered in a precise number of minutes. I think no one enjoys the martinet, but the televised lesson needs considerably more attention to shape, pace, style, and tone than does its counterpart in the classroom, which is jointly shaped by teacher and student. One realizes the kind of care necessary in the making of a television lesson if he remembers that that lesson, unlike the one in the classroom, can be played again and again. Whatever virtues may thus be repeated are repeated along with whatever errors have also been committed. At all points it is the classroom teacher who has the advantage—he may explain himself or apologize or smile at his students. None of these devices may be counted on by the television teacher. 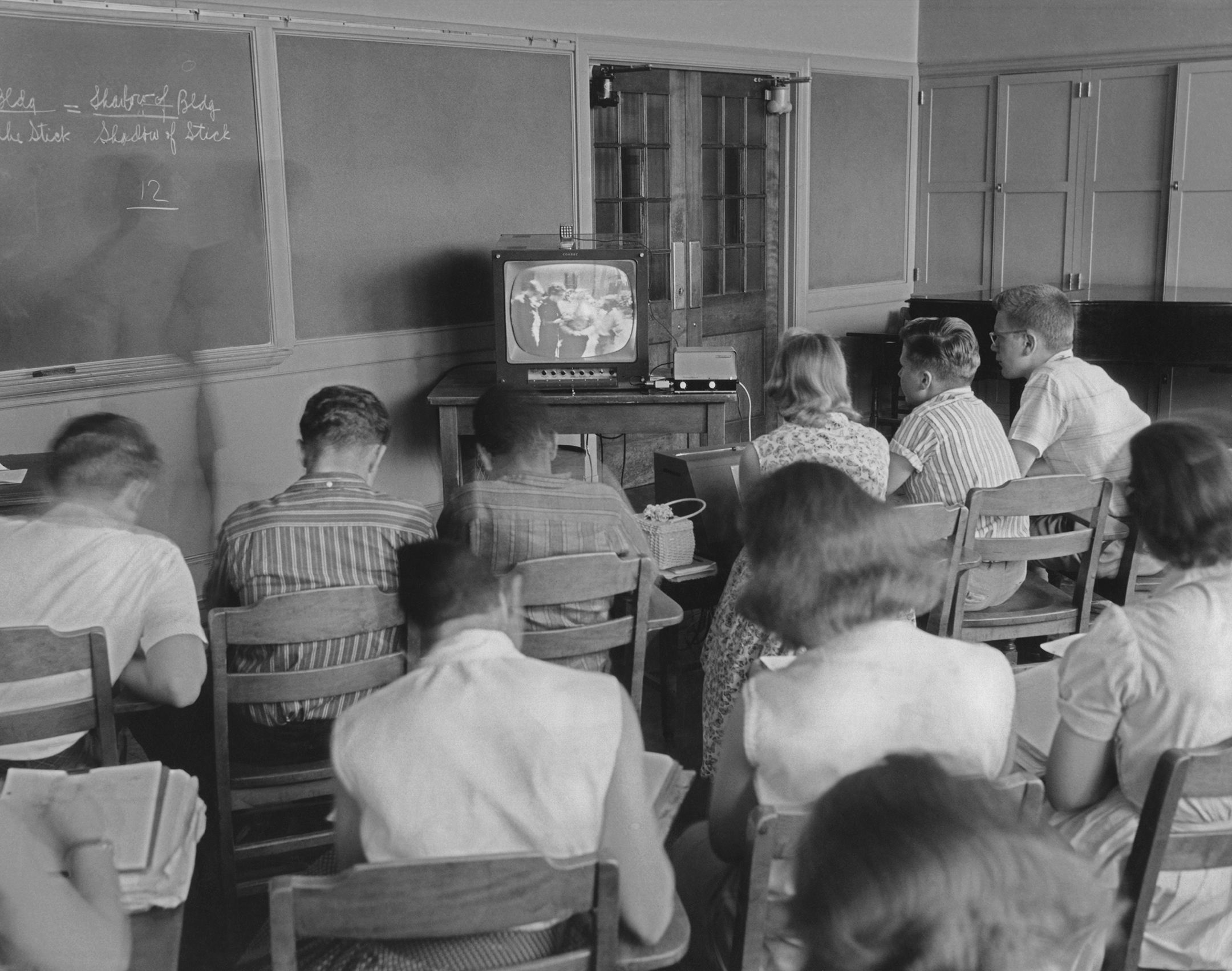 A geometry problem is televised from the courtyard to a second floor classroom in Bergenfield High School, experimenting the use of Philco Industrial Television as an educational tool, circa 1958.

Now, how can a televised lesson best be used? My own hope is that it will always be used as an adjunct to, not as a substitute for, the classroom situation. The television lesson can never be more than a resource, a further and useful device—along with maps or models or photographs or paintings or eyewitness accounts. The televised lesson is a kind of animate artifact, useful as a tool, useless as an end in itself. The responsibility for the education of students must rest with living persons. In a society that values humanity, the absolutely mechanized classroom will never come to pass. In the ultimate sense, mechanized teaching is inefficient. By definition, the teacher stands by to answer the question that has not yet been asked. No machine can ever fulfill this task.

The televised lesson is a point of departure for the classroom teacher. It would be a great pity if he undertook either in manner or method to imitate the teacher on the screen. If the classroom teacher takes from the televised lesson what his own understanding and temperament tell him he can use, and if he develops it in his own way, it seems to me he will then use the artifact as it should be used.

The teacher ought to develop an intelligently quizzical stance toward the televised lesson. He should check the information it purports to convey or he may ask his students to check it. He may use the lesson on the screen to provoke discussion. For example, in the lesson I recently televised, I observed somewhat idiosyncratically that the concluding couplet of Shakespeare's Sonnet 73 is an artistic failure. Surely, any teacher has the right, if not the downright duty, to question my judgment with his students. The television lesson can be the object around which teachers and students gather for discussion, it is not the voice of authority before which they must bow. The sensible teacher will use it as a wall against which to bump heads—his own, his students, or that of the teacher on the screen

The real lesson is finished in the classroom. What takes place for half an hour or more on the screen is the merest beginning.

A teacher of flesh and blood, surrounded by the living students who define his profession, has the job of finishing the work that the machine in the classroom has helped him to begin.