Who Pays for Higher Education—and How?

Paying for college in the United States is harder than it needs to be. A complex mix of loans, scholarships, state and federal subsidies, student earnings, and family wealth make it almost impossible for families to tell what college really costs. That confusion is holding back many students from making smart investments in education.

The convoluted American approach stands in contrast to simpler college financing plans in the rest of the world. The U.S. system supports some of the best universities in the world, but it also creates vast gaps in access.

“Who pays for higher education? What’s optimal?” asked Neel Kashkari, president of the Federal Reserve Bank of Minnesota, kicking off a virtual conference on college financing hosted by the Bank’s Opportunity and Inclusive Growth Institute. “The answer cannot simply be … that all students saddle themselves with ever-increasing amounts of debt. I don’t think that’s a good solution for students or their families, and I don’t think it’s a good solution for our society and our economy.”

The total student debt load in the U.S. is approaching $1.6 trillion. While much of that comes from expensive professional schools—medicine, law, dentistry—the rising burden makes it hard for students to know how much debt is worth it.

Figuring out a system of paying for college that’s fair to students and productive for the economy has vexed U.S. policymakers, institutions, and students for years. But the issue has gained urgency as many economists, including those at the Federal Reserve, argue that student debt and unequal college access are hindering economic growth.

“There are large disparities in who goes to college, but not in the economic returns, or who benefits, from going to college,” said Adam Looney, a Brookings Institution economist who spoke at the Fed conference. “It’s not only a problem because it’s unfair. It’s a problem because children in low- and middle-income families are forgoing very valuable investments they should be making.” 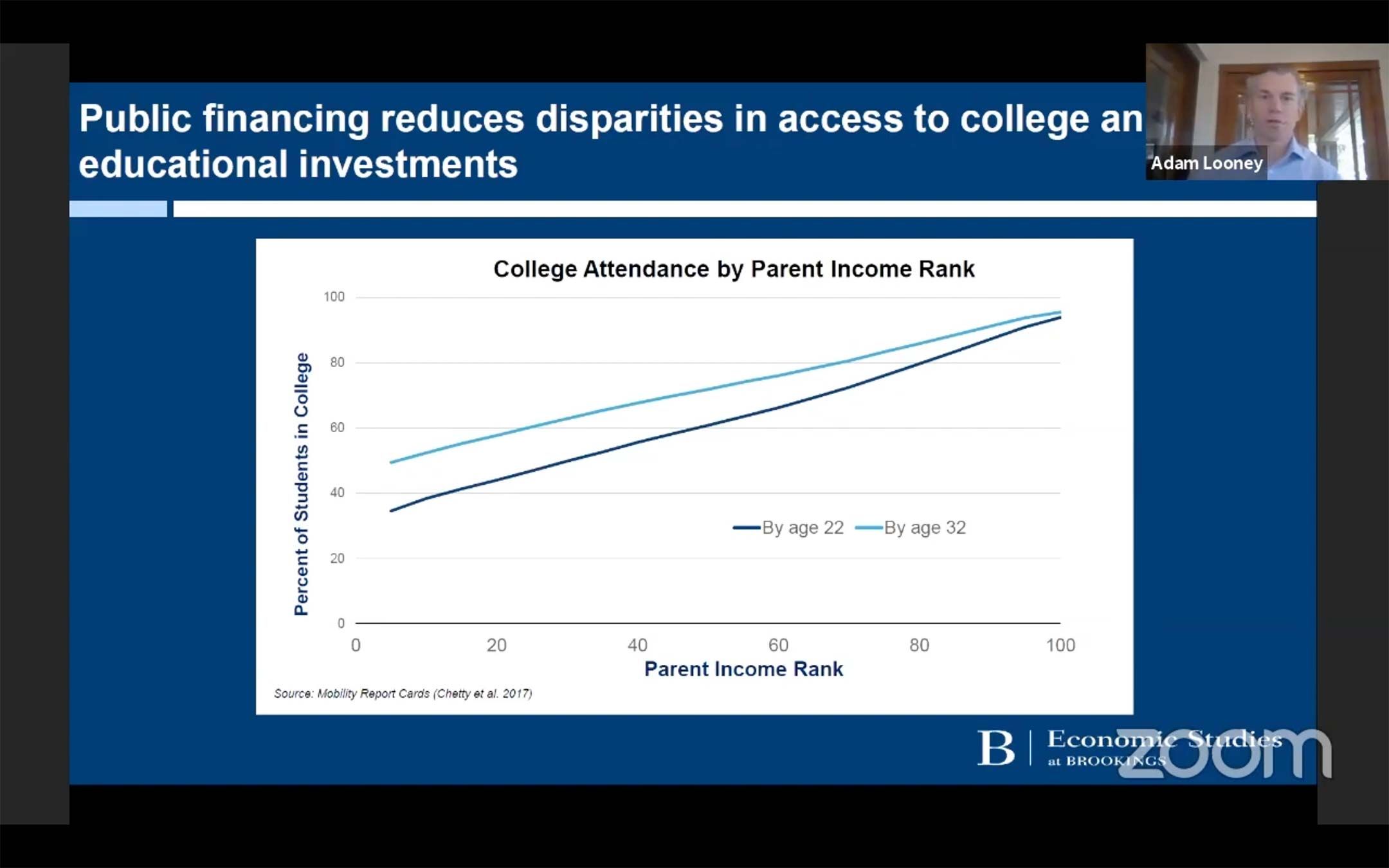 One of the best ways to encourage more talented students to attend college is to simplify aid programs, said Beth Akers of the Manhattan Institute. Too many students don’t know about the grant aid the federal government can provide, or they don’t know how to get into the borrower protection programs that are supposed to make student loans more affordable.

“There still exists a tremendous information problem,” Akers said. “It seems that we have not solved the problem of people appreciating the availability of aid. As a result, the enrollment gap continues to persist. What we have is not quite working.”

Income-based repayment plans are supposed to cap the amount of money that student loan borrowers have to repay, minimizing the risk to students. Many countries make these programs automatic for students who take government loans, but the American version of the program is much more complex. The application process is difficult, private loan services often deny borrowers who should qualify, and different kinds of loans come with different conditions.

We need a system that’s “harder to screw up,” said Sue Dynarski, a professor of public policy at the University of Michigan. “The high-aid model the U.S. now has in place should in theory make college very inexpensive for low-income students.” But, she added, it doesn’t work out that way because people either don’t know that substantial aid exists or it’s very hard to gain access.

Dynarski is a longtime advocate for making the Free Application for Federal Student Aid (FAFSA) much shorter or eliminating it altogether and simply using tax data to automatically award financial aid. That would encourage more low-income students to enroll and complete college.

But the underlying problem behind college outcomes is huge inequality in household wealth. “I agree that education can be a powerful tool to help think about closing gaps,” said Dominique Baker, an education researcher at Southern Methodist University. “But it’s important to keep in mind that these gaps are present all along the education spectrum. Not all individuals in all families have access to the same amount of money.” 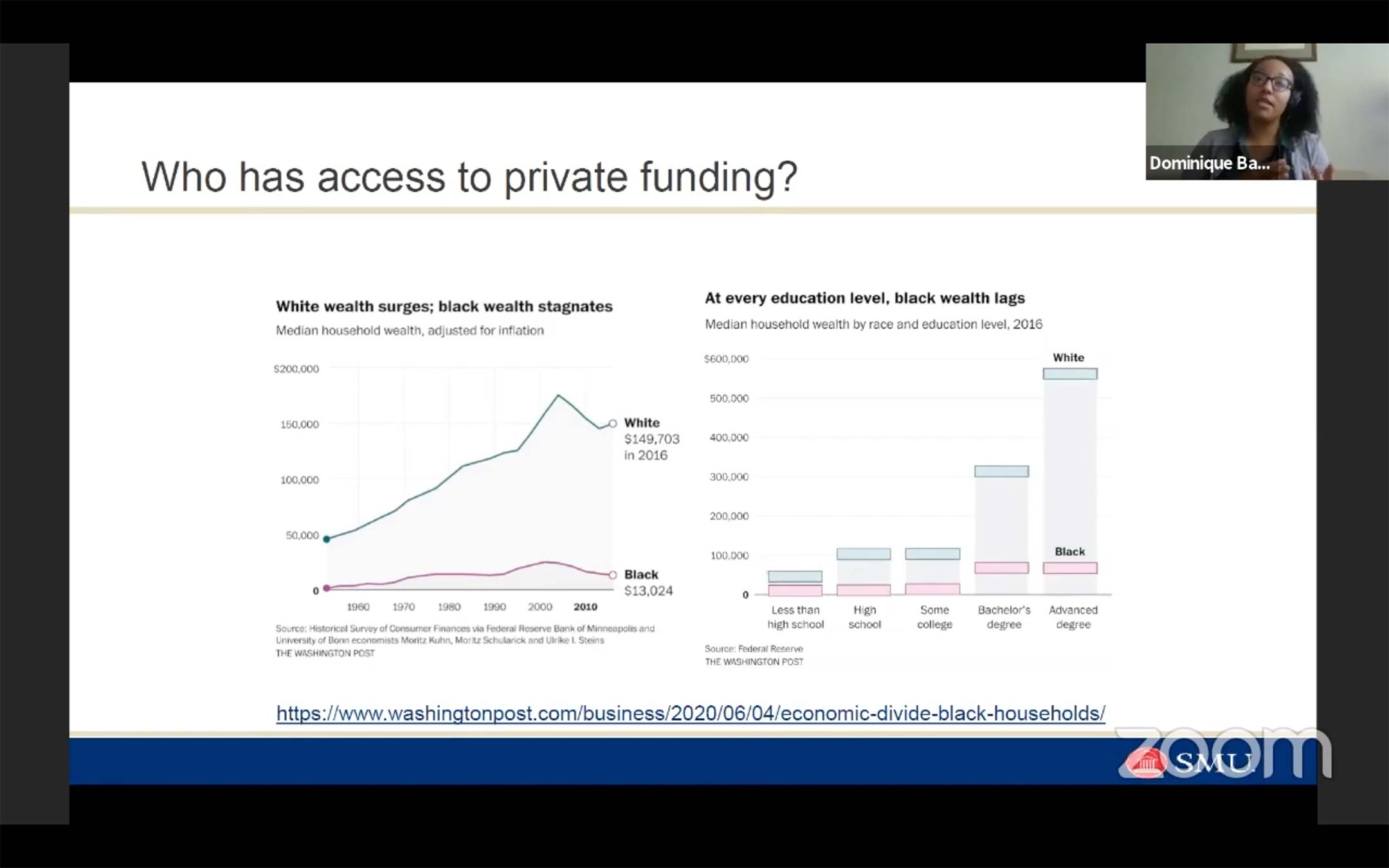 That makes college financially riskier for black families, even though students who complete a degree are much better off than those who don’t. “For large numbers of students, taking out loans is a risky bet and many of them have unfavorable outcomes,” said James Kvaal of the Institute for College Access & Success. “There are a very large absolute number of students who are either defaulting or unable to pay down their student loans.”

Those students’ stories, in turn, become cautionary tales that discourage others from making worthwhile investments in education. The American economy ends up overlooking and underinvesting in talented young people because college appears out of reach or too risky.

“What you’re seeing is a world where more people are trying to go to college and taxpayers are not footing as much of the bill,” said Harvard economist David Deming. Fixing that, he added, will mean a combination of stronger funding for state universities and better targeting of financial aid.

Pulling that off in the middle of a deep recession will take a commitment of political will that doesn’t seem likely, Dynarski warned.

“Funding to higher education gets cut just at the moment that more students are flooding into schools,” she said. “I’m very concerned we’re going to lose a lot of low-income students whose talents we’re going to need going forward.”