Debating Debate, Monumental Overhauls, and Our Stuff, Ourselves: Five Things That Made Us Smarter This Week

From rethinking old traditions to exploring new galactic views, we learned a lot over the last seven days

The fact that this stock image feels like it could be an outtake from an actual debate says everything about the state of disagreement in America in 2021.

I’ve written before in this space about the growing geographic divide between left and right in America—the fact that large numbers of Democrats and Republicans now live and work in places where they rarely encounter people with different worldviews. That makes it easier to caricature your opposition and harder to find the points of compromise so necessary to democratic life. Now, a group of civic organizations is trying to tackle that problem with technology, kicking off a National Week of Conversation by inviting thousands of strangers to take part in direct conversation with someone who disagrees on politics. “Yes, it’s a lofty undertaking, and a ripe target for cynics and naysayers,” writes Gary Abernathy in The Washington Post. “It’s not designed for the denizens of most digital message boards, where snark and insolence flourish, abated by anonymity. It’s for people who yearn to expand their universe, better understand each other and perhaps even make new friends through productive and respectful conversation.” I have to believe that’s still the majority of people in this country. Over the last few weeks, we’ve interviewed Amanda Ripley on how to break out of “high conflict” and have more productive discussion, and featured two education reformers who disagree about all kinds of policies and still find common ground in their goals. But most hearteningly, we hear almost every day from students who get a kick out of classroom debate or discover something new about the world through conversations with friends and teachers. We’d love to hear from you! Sign up for an America Talks session and let us know how it goes. —Stefanie Sanford 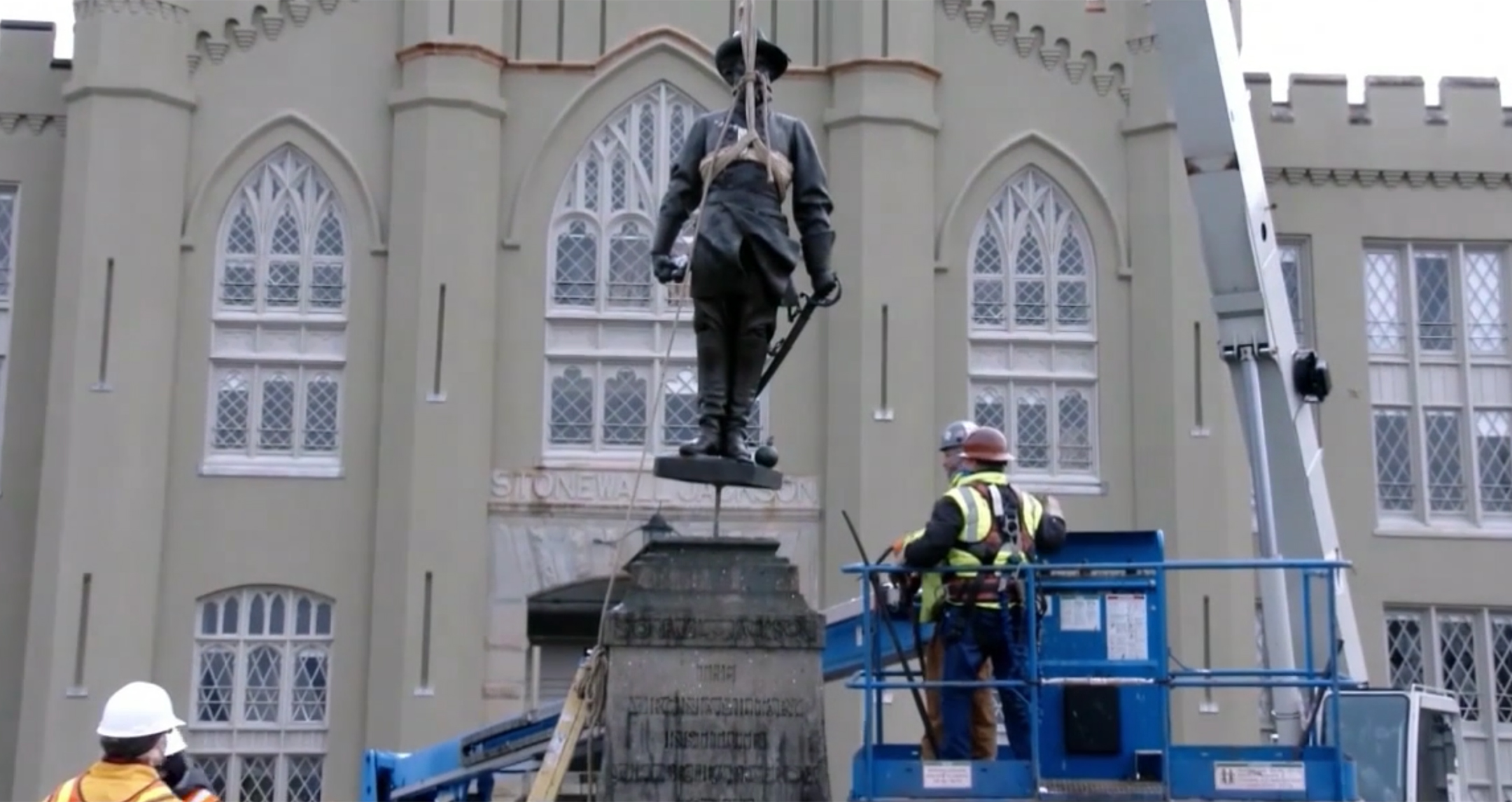 Screenshot from a VMI video showing the removal of a statue of Confederate general Stonewall Jackson from its campus in December 2020.

Losing the Lost Cause

One of the many upsides of this not being an election year is that excellent political reporters like Molly Ball have the time to dive deep on stories like the Virginia Military Institute’s agonizingly slow reckoning over a history and culture steeped in Civil War nostalgia. Plenty of colleges and universities are reexamining the way they tell their own history, creating controversies between students, donors, and alumni. But it’s an especially fraught project at VMI, where as recently as 2015 recruits were required to salute a statue of Confederate general Stonewall Jackson that stood prominently on campus.

That statue is down now, but the fight over VMI’s past and future has only intensified. Ball’s reporting gives a searing view of the pressure school leaders face when they’re caught between students and young alumni demanding change, and older alumni and state lawmakers who see those changes as a threat to the institution’s strength. “As VMI clung to its past, the world around it had changed with disorienting speed,” Ball writes. The school is now facing an outside investigation, has its first-ever Black superintendent, and continues to debate what might happen to the dozens of prominent Confederate symbols that adorn the campus. “In my conversations with dozens of VMI cadets, alumni, officials, and parents, nearly everyone described an evolving perspective on race in recent years,” Ball writes. “That is why the stakes of this fight are so high for all involved: myths like the Lost Cause can only survive if they are handed down from one generation to the next.”

All of this is a reminder that college campuses are so much more than just places to learn. They’re cultural monuments, built to reflect and honor the societies that made them. As those societies change, the fight to change colleges will only intensify. —Eric Johnson 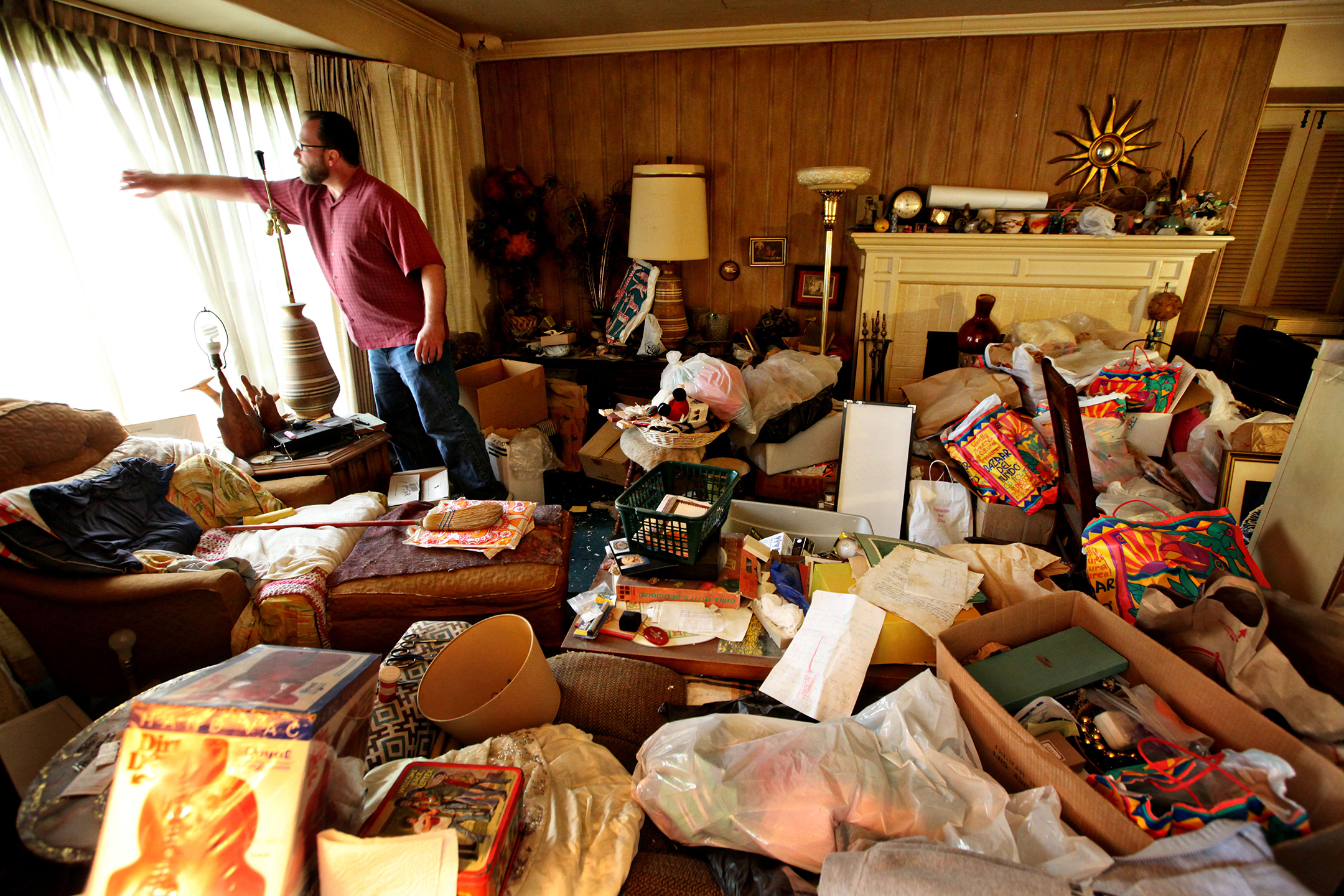 Sandy Huffaker/Getty Images for YOU Magazine

Greg Martin prepares to clean out his mother's home of belongings on April 8, 2011, in San Diego, California. Martin's mother was a hoarder. It was left to Martin and his wife, Sidney, to clean his mother's place out after she passed away.

"The things you own end up owning you" is one of the many sticky aphorisms spouted by Tyler Durden in Chuck Palahniuk's book Fight Club. But it really wormed its way into the deeper culture consciousness thanks to David Fincher's brilliant film adaptation—so much so that you can almost hear host Shankar Vedantam and author Bruce Hood's minds contorting not to say it as they discuss our addiction to stuff on the podcast Hidden Brain. Hood, professor of Developmental Psychology in Society at the University of Bristol, wrote Possessed: Why We Want More Than We Need, which was published in 2019, to dig into research he has done studying "our relationship with our possessions – from beloved childhood objects to the everyday items we leave behind." Hidden Brain tees up the conversation by asking "What do the things you own say about who you are?" For Hood, it all comes down to a compulsion that may be hard-wired into who we are as a species. Or, alternatively, "It’s almost as if there's a little demon inside us, an irrational little monster who controls our consumption."

In 2021, this isn't a particularly novel query. Our complicated relationship to junk, knickknacks, and stuff has created a cluttered cultural cottage industry of memoirs, shallow self-help guides, philosophical treatises on saying "thank you for your service" to that bag you never really used, and reality shows about hoarders and weirdos who fight over repossessed storage units. Yet the conversation between Vedantam and Hood feels more resonant and valuable now, 15 months into our pandemic experience. So many of us have been stuck at home the last year-plus, seeing the same people but also the same mountains of stuff. If you're anything like me, you've had at least a dozen flashes of inspiration that go something like "What if I just... got rid of it all?" But just as quickly the mind wanders and you go right back to stress-shopping on Amazon. Hearing Hood talk about this consumption compulsion might be what we need as we reassess who we are and want to be coming out of the pandemic. And try as they might, Vedantam and Hood can't avoid that Tyler Durden line. But I found myself also thinking of the second half of the quote: "It's only after you lose everything that you're free to do anything.” Where are those trash bags...? —Dante A. Ciampaglia 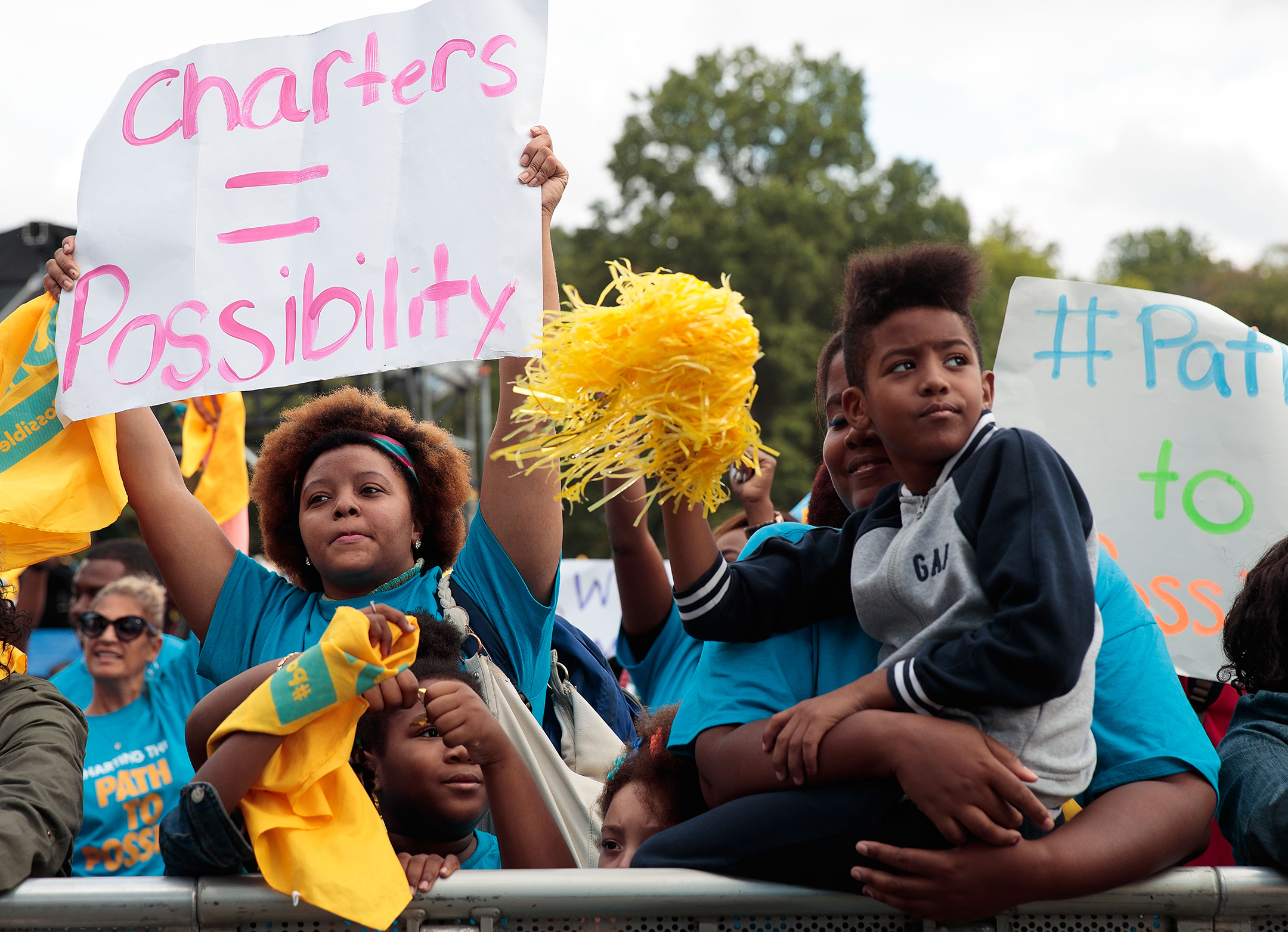 A few years ago, the large suburban district where I went to school in North Carolina started publicly measuring “market share”—the percentage of school-age students in the county who chose the public system over private academies or homeschooling. The number gets treated as a proxy for quality, a way to track whether families with the means to choose alternatives are sticking with public schools or opting out. Evidence is mounting that the huge disruption to K12 education during the pandemic is going to make those market share battles a lot more challenging for public schools, and school choice advocates are celebrating the trend. “COVID-19 shock has thrown K–12 schooling into disarray. But it also catalyzed creative and determined parents, innovators, and policy leaders to respond in new ways,” writes Bruno V. Manno, an advisor to the Walton Foundation and a strong supporter of charter schools and school voucher programs. “Our best hope is that our emergence from COVID-19 shock positions us for what could be a new era in educational excellence, one in which families have more direct control over, and options for, their child’s education.”

Whatever your views on vouchers and charters, Manno is right that a year of remote schooling, learning pods, and a lot more parental involvement in day-to-day learning has driven many families to weigh their options. In many states, and especially in large urban school districts, private schools were much more likely to remain open for in-person learning last year than their public counterparts. Lawmakers across the country are weighing an expansion of voucher programs. And millions of parents now have direct experience using online learning tools and helping navigate their children’s curriculum. Nobody knows exactly what this will mean as schools reopen for a more normal academic year this fall, but public school advocates and school choice proponents are watching closely. —Eric Johnson 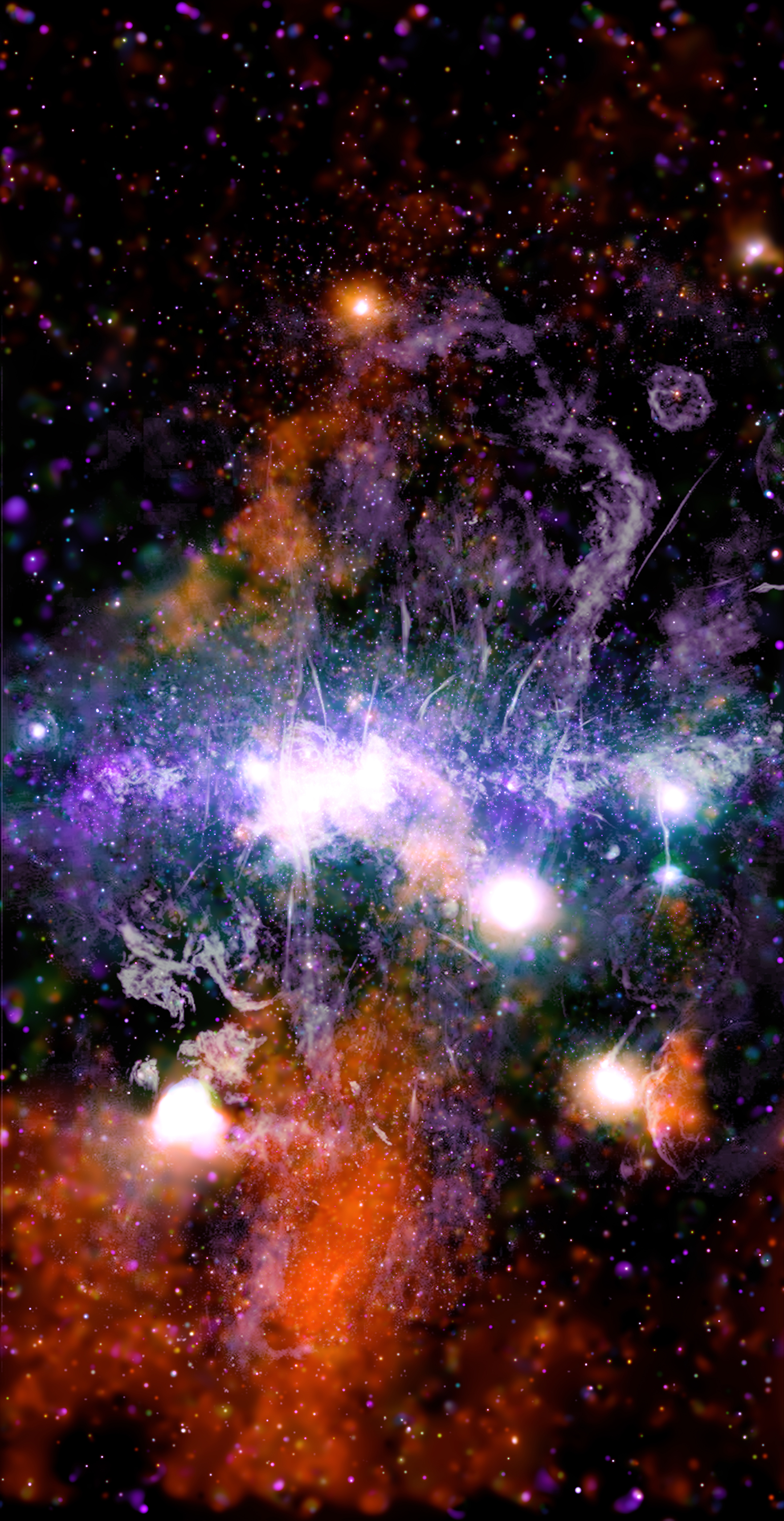 No, this isn't some background art from an Avengers movie. This is real life. And it's spectacular.

Just look at that image. Really take a moment to behold its beauty. At a time when we're so accustomed to getting majestic views of the universe from NASA and the Hubble Space Telescope, this panorama from the Galactic Center of the Milky Way is truly breathtaking. It was made by stitching together 370 observations of X-ray and radio data taken from NASA's Chandra X-Ray Observatory that were taken between 1999 and 2019. What are we seeing in this composite image that took 20 years to create? Does it matter? Just look at it!

OK OK, here's what the image shows us, per NASA: "This latest [panorama] expands Chandra's high-energy view farther above and below the plane of the Galaxy—that is, the disk where most of the Galaxy's stars reside—than previous imaging campaigns. In [this main graphic], X-rays from Chandra are orange, green, blue, and purple, showing different X-ray energies, and the radio data from MeerKAT are shown in lilac and gray."

The Chandra website has a lot more about the image, what it says about our galaxy, and the "particularly intriguing" perpendicular intertwining of X-ray and radio emissions at the center of the Milky Way, which is "about 20 light years long but only one-hundredth that size in width." This is all excellent and exciting, but, sorry, I can't get past being completely gobsmacked by the image. I don't know if it made me smarter; it probably did. But I certainly feel more expansive than I did last week. —Dante A. Ciampaglia