Hackathons in the Classroom: A User’s Guide

When NASA wanted to put men on the Moon, it needed a bank of supercomputers to do it. It was the only way to give the Apollo astronauts the computing power they needed to run complex calculations on trajectories, gravitational pulls, slingshot maneuvers, and navigation.

Is that a fair comparison? Probably not. Chargers are designed to replenish, quickly, our devices’ batteries; the AGC was built to put men on the Moon. Still, it shows how far technology has come, especially since the digital revolution that began in the 1990s. The first computers were expensive specialized, room-sized tools specifically designed for a specific use (dropping bombs in World War II, say, or sending humans into outer space). The devices we use today— from smartwatches to tablets to advanced desktops—are relatively affordable, exceptionally powerful, and can be used by anyone, anywhere to tackle any challenge.

Solving the world’s problems can be done alone, but collaboration always fuels creativity and drives better outcomes. And one way computer scientists, engineers, enthusiasts, students, or just the curious realize technology’s potential to address issues—and improve the world—is the hackathon.

TechGig’s “A Brief History of the Hackathon” pinpoints the source of the term to either OpenBSD’s Theo or Niels Provos, who, in 1999, was among 10 developers who gathered in Alberta, Canada, to develop cryptographic software. That same year, Sun Microsystems organized the JavaOne Conference, an early large-scale hackathon with attendees creating a program for the then-new Palm V. Over the next two decades, hackathons were embraced by corporations, start-ups, and clubs to problem solve and innovate, often organized as competitions with various prizes for the winners.

When they’re held in classrooms, though, hackathons serve other purposes. They bring together diverse populations to broaden the view and understanding of an issue—which not only helps generate solutions but improves how students think about technology’s potential and place in society. (Prizes are still involved, though.) As veteran computer information systems instructor John Johnson once said, "First, solve the problem. Then, write the code." 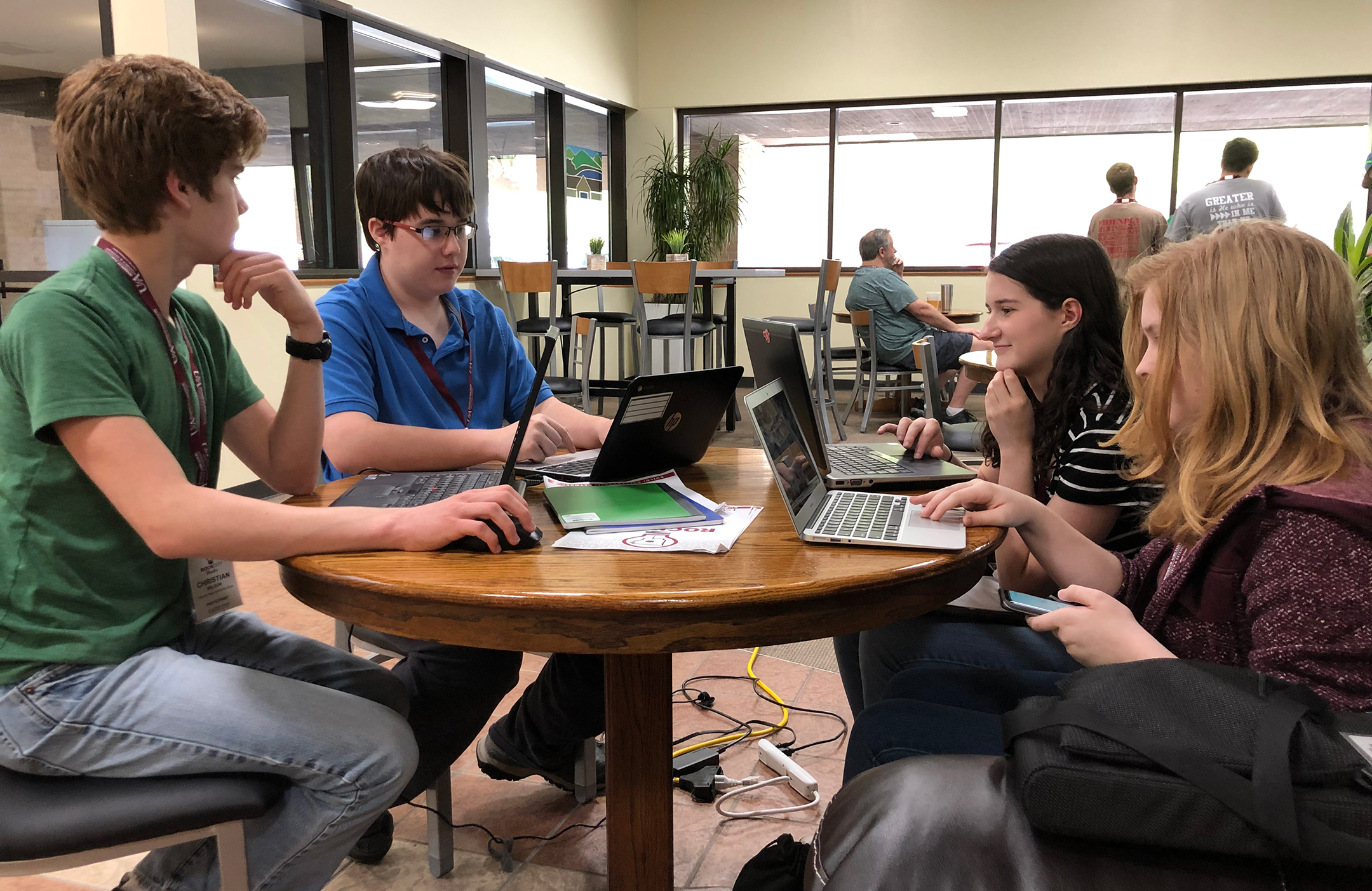 That was the spirit of a recent hackathon held at Cornell University.

In March, the Cornell Institute for Digital Agriculture hosted the Digital Agriculture Hackathon for nearly 100 participants. Each team was given five challenge categories—data-driven crop production, optimizing controlled-environment agriculture, reducing waste, byproducts for protection and agroecology, assisting small-scale farmers, and solving for food-waste and safety—and had to hack together a solution to the problem and pitch it to judges. They only had 36 hours to pull it all together.

“If we’re going to address these challenges in agriculture, like feeding our growing world population, it really takes a very broad, transdisciplinary approach,” Sam Alcaine, assistant professor of food science and hackathon faculty co-chair, told the Cornell Chronicle. “You’ve got to find a way to get out of your silo and meet somebody from computer science or somebody from animal science or global development, and that’s what this event allows to happen.”

A growing number of high schools are also organizing hackathons. In February, the student-run IT career pathways nonprofit INTERalliance of Greater Cincinnati held its 13th annual INTERalliance TechOlympics, a free two-day virtual event designed "to give high schoolers the opportunity to explore the technology industry." For the first time, the TechOlympics included a hackathon. The “innovation-focused” event was designed “to acquaint students with the regional technology industry.” Two months later, students made apps, websites, and NFTs during the day-long Northland Hackathon, which was held remotely in Duluth, Minnesota. The hackathon, also free, was a way to introduce high schoolers to a career in technology. But, more importantly, it was designed to simply bring young people together.

“To 'Hack' in means to create something new and build a project. It's the digital form of Lego building and is meant to be as free-form as you want to make it,” organizers wrote on the hackathon website. “We may introduce a theme to the hackathon (environment, building for Duluth, etc.), but the main point is to meet others, learn, and have fun by creating something new.”

As the Cincinnati and Northland events demonstrated, hackathons are a tool to engage computer science students—made even more powerful by the opportunities of connecting larger groups of students remotely. To help students and educators host their own hackathons—both virtually and IRL—College Board recently released “Coding Outside the Lines: Exploring Alternative Applications of Computer Science.” 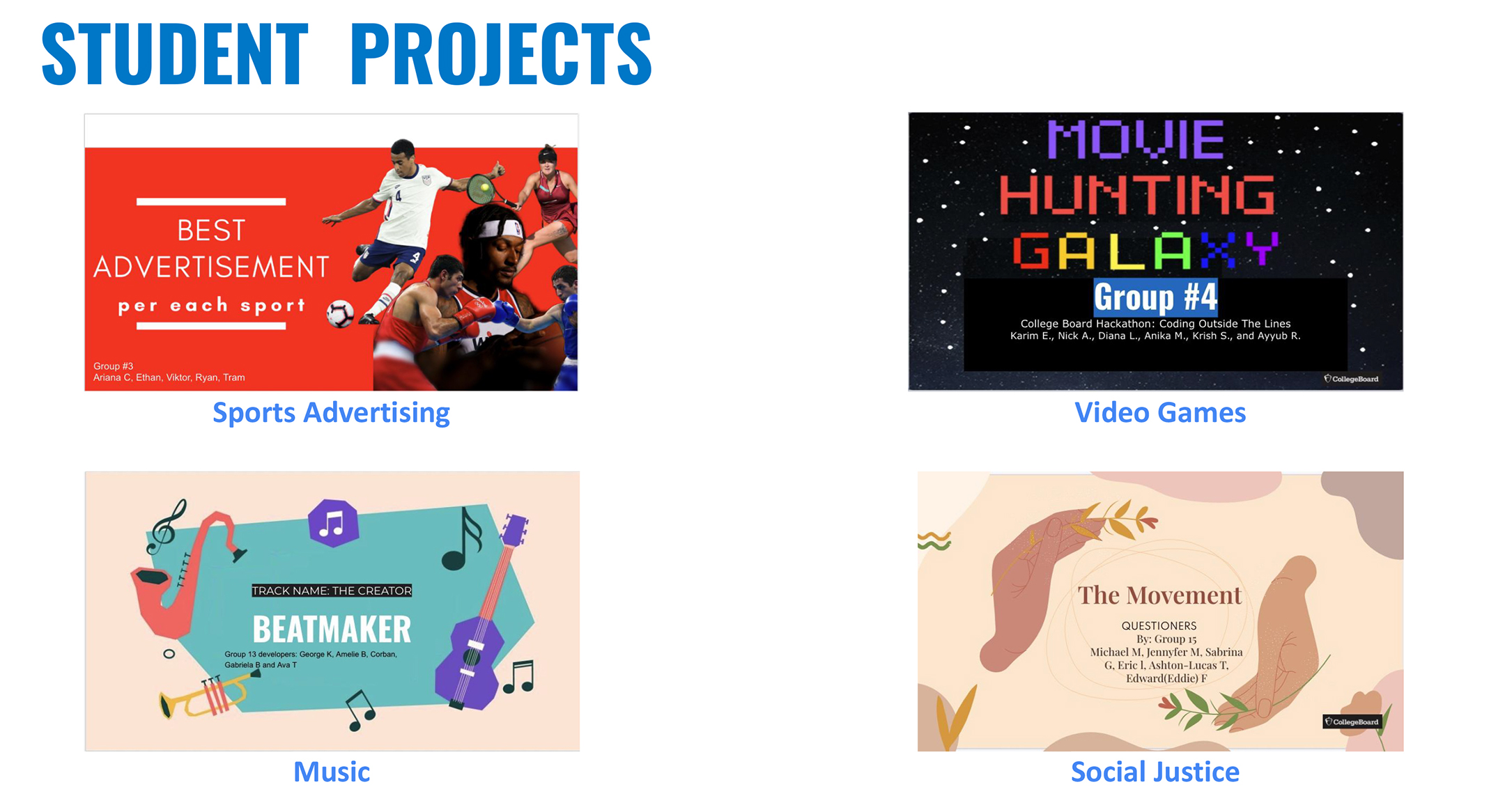 Four projects created during the Coding Outside the Lines hackathon: (clockwise from top left) an app connecting brands with athletes, a movie and games recommendation engine, an app connecting people involved in social justice issues, and a music maker.

The toolkit and event guide are extensions of a hackathon the organization hosted in March. It was designed as part of the AP® Computer Science Principles course, and was attended by 126 students from 67 high schools in 22 states. During the five-hour event, participants collaborated in teams by using Zoom and Discord chatrooms to create projects that would solve problems concerning social justice, the arts, and advertising. They were aided in their coding by 15 "near peer advisors" with coding experience and wisdom to share, as well as AP CSP teachers with expertise in Scratch and App Inventor, with the final projects judged by a diverse eight-person panel of educators, professionals, and entrepreneurs.

While “Coding Outside the Lines” was designed as part of the AP CSP experience, the experience can be replicated in any computer science classroom. The College Board toolkit is a means to doing just that, with guidance on organizing a hackathon and putting it on, as well as tips for ensuring students (and teachers) getting the most of it.

But that’s just the start. The hackathon universe is ever expanding, thanks in no small part to opportunities for virtual and remote collaboration. If you don’t want to start your own hackathon, though, there are several organizations that provide listings for existing events to join, such as Devpost, Major League Hacking, HackClub, and TecHacks, a nonprofit organization aimed at female and non-binary students.

With so many problems in the world, it's good to know there are plenty of places where young people with computers can find the hackathons—and peer groups—to code their way to solutions.