Podcasting in the Classroom: A User’s Guide

Audio storytelling dominates the digital media landscape, and it offers students the chance to develop vital skills in a fun, engaging way

We’re in a golden age of podcasts—currently about 800,000 shows reach more than 60 million U.S. listeners. (Maybe we’ve reached peak podcast?) But fun fact: podcasting has been around a while—since 2004, in fact. The format has matured and evolved in that time, and in many ways it’s eclipsed other forms of online communication, like blog writing.

People engage with podcasts more deeply and tend to commit to programs week after week. Listeners also tend to share podcasts with each other, which means a compelling program from an independent writer or storyteller is just as likely to find a massive audience as an episode produced by NPR.

But through all its growth and improvements, podcasting has remained accessible and cheap to produce—and that makes it a stellar medium for students.

A podcast program can help students become better writers and communicators, and improve their research skills and get them thinking like audience development strategists and online publishers. Even better, teachers who incorporate podcasting into their lessons won’t be pulling teeth getting their students engaged: studies show people have longer attention spans when listening to something, as opposed to watching or reading.

In his book Philosophy of Literary Form, rhetorician Kenneth Burke describes the challenge of the “unending conversation.” You enter a room full of people in the middle of a discussion, and they’re too involved in it to catch you up. But what makes catching up even more difficult is that “the discussion had already begun long before any of them got there, so that no one present is qualified to retrace for you all the steps that had gone before. You listen for a while, until you decide that you have caught the tenor of the argument; then you put in your oar.”

The world of digital communication—blogs, social media, and especially podcasts—is built on such unending conversations. And teaching students the art of podcasting and writing for radio, you’re showing them how to most effectively “put in their oars.”

Because it doesn’t cost much to produce an episode or show, podcasting is a highly saturated industry. (Assuming you already own a computer, you can record an episode for less than $100.) That means students will have to make their work stand out, and writing something distinct and unique takes practice. Students will have to develop the abilities to write dialogue, conduct interviews, and pace storytelling. These skills will allow them to productively join conversations—both online and in the real world—and give them a foundation to succeed in other kinds of writing and communication. 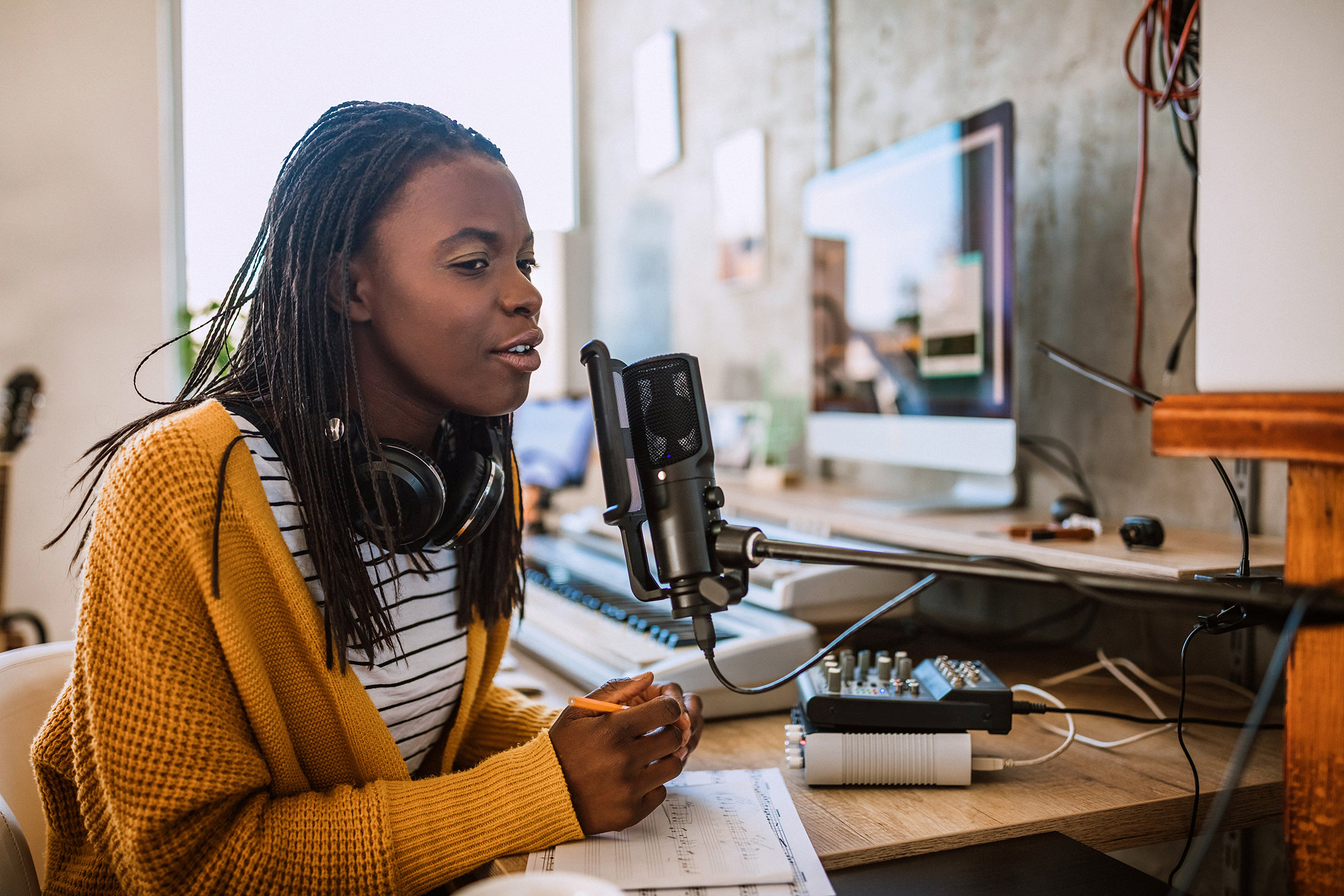 Staking a place in the unending conversation of podcasts has another benefit. In most cases, great nonfiction podcast writing requires the ingestion of a ton of existing news and arguments. A podcast project requires students to filter and synthesize information into a listenable, succinct format, making choices about what to include, what to leave out, and how to best convey information. In other words, they’re being asked to think like a writer and editor. Podcasting also encourages students to exercise and flex their reading comprehension skills, improve their media literacy, and learn how to translate formal writing (a study or research paper) into more informal conversation. (Creating a podcast to tell a work of fiction also requires several rounds of script editing and postproduction editing—to say nothing of creative storytelling—and these are skills students will need in any number of industries.)

Today’s media environment is dominated by fickle audiences consuming content on phones and devices. Podcasts have cornered the market on longform, loyalty-inspiring storytelling, and that creates both an opportunity and a challenge. Podcasters have to deliver for their long-time listeners while also creating an inviting space for new ones. They have to create for listeners who binge episodes and those who take days (or longer) to complete one installment. And they have to be true to the objective of the podcast while looking toward future innovation. These are all valuable skills to master—and students who hone them early will have an advantage over others who come to podcasting and digital media later.

I’ve cohosted a podcast with my best friend for two years, and the chief skill it has helped me develop is expressing myself in real time. When students speak on a topic they’re passionate about and then listen to the recording, they’ll notice verbal tics and less-effective speech patterns they may have unconsciously developed over time. No matter what industry they decide to enter, students will better carry themselves in public having studied their own communication skills in the safety of the classroom.

Another beneficial outcome is becoming a better listener. There’s no difference in preparing for a podcast interview or a text-based story: you need to do your research, you need to know your facts, and you need to know the direction you want to steer the conversation. But conducting interviews for a podcast is a unique experience. You are both the architect of the conversation and a likable, dynamic participant in it. The best podcasters learn to make quick decisions on the fly, for both the sake of the episode and the benefit of the person they’re speaking with. They do that by actively listening and responding rather than reading from scripted questions and waiting for their turn to speak. This is a vital skill for all sorts of professions—and simply living in society—and podcasting can get students there.

Pop Culture in the Classroom: The Dos and Dont's