Ted Lasso, America’s Promise, and Roads Traveled: Five Things That Made Us Smarter This Week

From who we are to where we’re going, we learned a lot over the last seven days 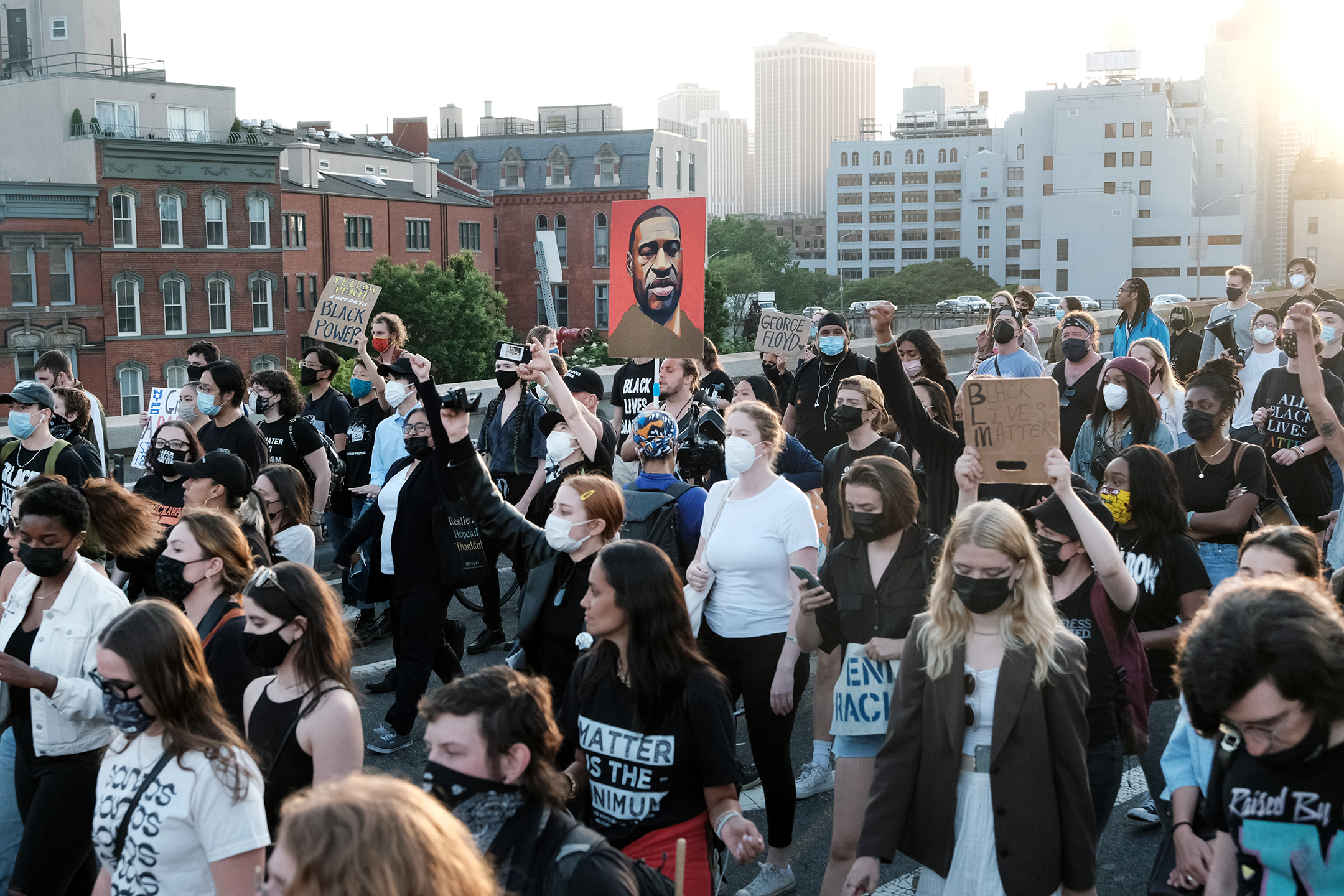 Black Lives Matter supporters and others march across the Brooklyn Bridge to honor George Floyd on the one year anniversary of his death on May 25, 2021 in New York City.

My friend Ted Johnson has a big idea about how to bring America together. He thinks the fight to create a more just and equal country—the fight to overcome racism and renew the promise of America, as he puts it in the subtitle of his new book—can be a unifying force in a divided country. “National solidarity is when democratic strangers come together over a cause of morality or justice in order to hold the state accountable,” he said in an interview with The Washington Post. “It is a kind of civic friendship that requires both sacrifice and forbearance in service of a matter of principle, not just over material interests.” It’s a beautiful vision, one I’ve heard Ted talk about for years as he’s worked on this book. He’s a former Navy commander, a White House Fellow, and now a scholar at the Brennan Center for Justice. He’s one of the most brilliant people I know.

What amazes me most about Ted is his willingness to work across all kinds of ideological lines to bring people around to his optimistic view of the world. Book excerpts have run in The New York Times and the National Review, publications that reach very different audiences. Ted has spoken to the American Enterprise Institute and the Aspen Institute, engaging with friends and critics on both left and right, and traveled back to his hometown in Raleigh, North Carolina, to make the case for a better future in American race relations. “This is absolutely an aspirational book,” he told Yacha Mounk of Persuasion. "It is not so much a question of the environment, and whether the environment will permit us to have the country we want, but whether or not we have the fortitude to create and manufacture the nation we want.” Last week, I got to watch Ted make that case to a room full of friends and colleagues gathered at my apartment, the first big social event we’ve hosted in almost a year and a half. People listened intently, asked hard questions, and shared their own experiences and ideas for how to bend the moral arc of American history in the right direction. There wasn’t perfect agreement, but there was sincere listening and reflection—exactly what Ted hoped to create when he started this project years ago. He has already shaped my thinking on America's racial reckoning, and I'm awed to watch him bring so much patience and empathy to a national conversation that needs a lot more of both. —Stefanie Sanford 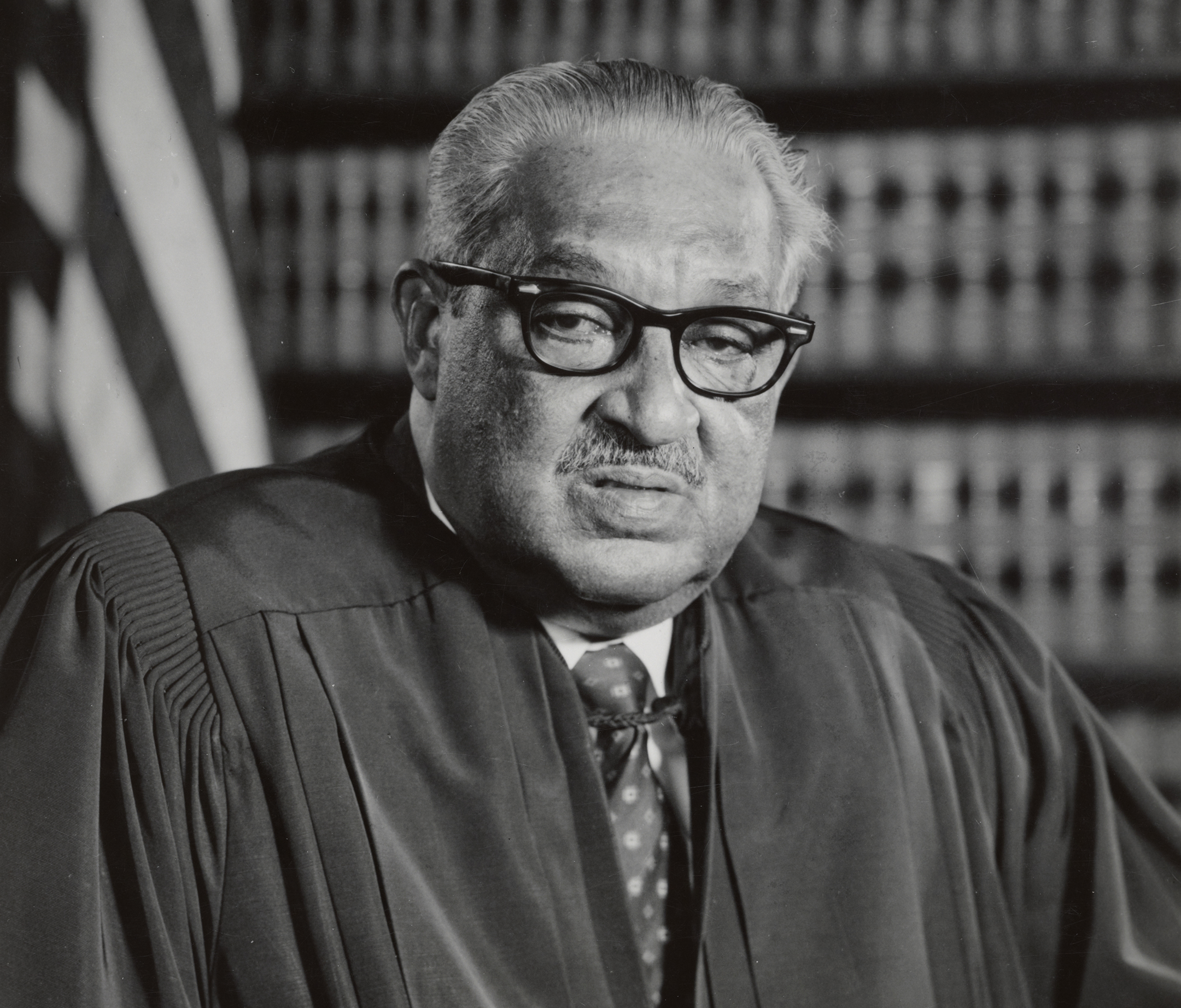 Holding Court with the Judge

Like a lot of people, I'm sure, my encounters with Thurgood Marshall have tended to come in history books and in the context of his landmark achievements, particularly arguing Brown v. Board of Education, becoming the first Black Supreme Court justice. But in Stephen L. Carter's soulful New York Times Magazine tribute to the man he calls the Judge, Marshall comes vividly to life, and in the best way possible—through his stories. "Marshall was among the great storytellers, heir to an American tradition stretching back to Lincoln and beyond," Carter writes. "He told stories to teach lessons—and also like Lincoln, he never told the same story quite the same way twice. The message was what mattered." Carter, a Yale law professor and the author of The Emperor of Ocean Park, had a front-row seat—and backstage pass—to Marshall's storytelling. He clerked for Marshall on the Supreme Court in 1980, sitting at the Judge's feet as he shared his experiences and lessons from a lifetime on the legal front lines of the civil rights movement: brushes with death in the Jim Crow South, witnessing surprising moments of American democracy in action, his thoughts on leaders like Malcolm X, and, surprisingly to Carter, his willingness to sit down with hard-core segregationists to try and cut deals and get things done. "'You could do business with him'—that was his highest praise," Carter recalls. The piece is a definite longread, but worth every minute. (There's apparently an incomplete oral history with Marshall, conducted by Carter for the Federal Judicial Center, and now that's all I want to hear!) It's an opportunity to resuscitate Marshall from the pages of history—as well as scrape off the barnacles of misappropriation and misunderstanding—through vibrant storytelling and, most importantly, teaching, from both Marshall and Carter. "There is something tragic and illiberal in evaluating other people according to their usefulness to our causes," Carter writes. "In the particular case of Thurgood Marshall, remembering him only for his votes, or even for the remarkable success of his work as the leading civil rights litigator in the nation’s history, deprives us of the opportunity to admire the fullness of his humanity." There has never been a better time for such a reminder. —Dante A. Ciampaglia 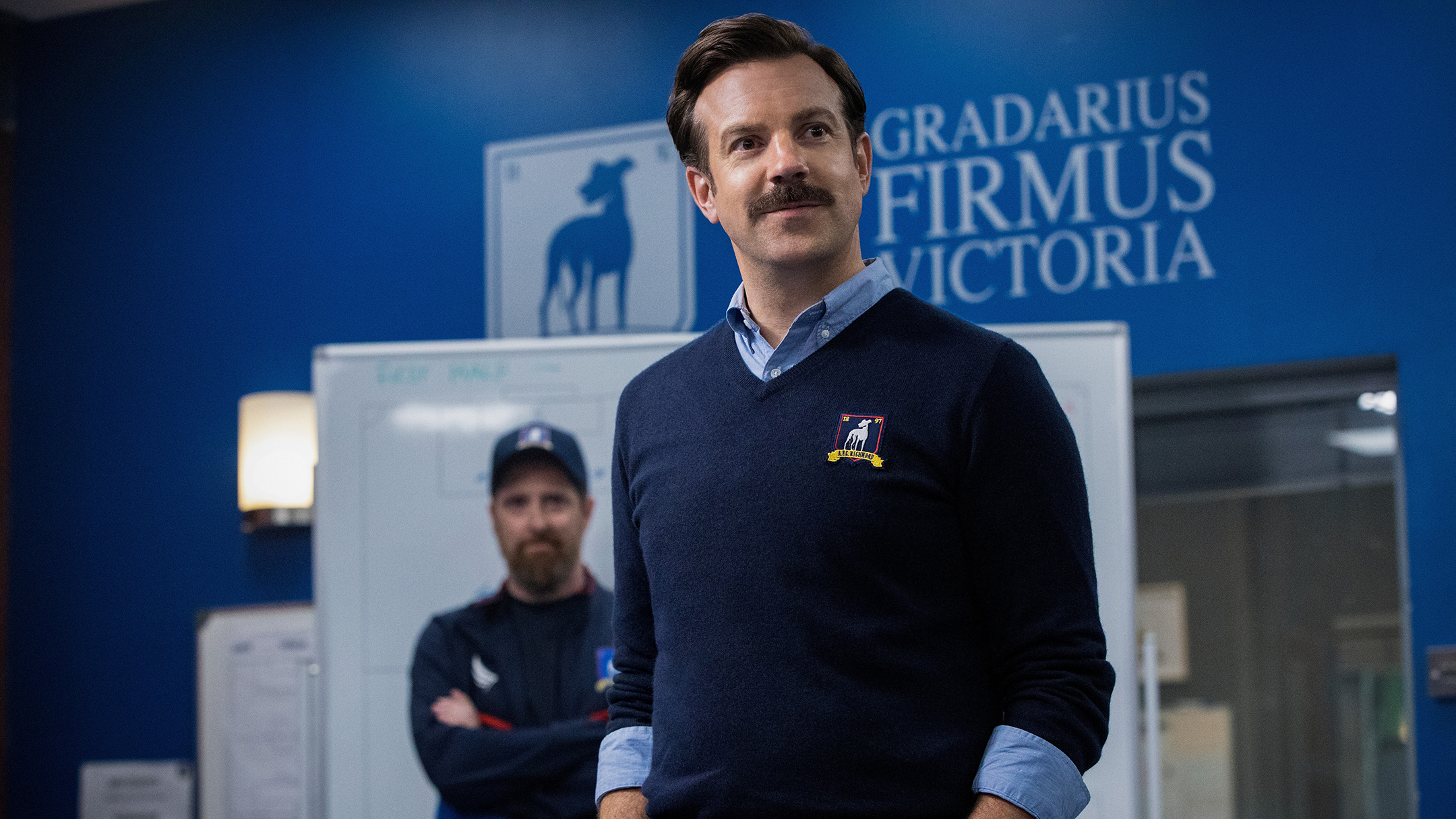 Jason Sudeikis as Ted Lasso has won over lots of viewers. But this biggest victory for this infectiously optimistic soccer coach? Bringing in people who are allergic to sports.

As mentioned many times in this space, I am sports-averse. I don’t play any, I don’t watch any, and I simply cannot understand how anyone, anywhere can get deep satisfaction out of soccer. That’s why the first half-a-dozen times people recommended Ted Lasso, I demurred. An earnest soccer comedy? It’s hard to imagine a less appealing string of words. Yet the endorsements kept coming. And not just from friends smitten with a TV hero who isn’t mean or profoundly damaged, but from critics I respect arguing Apple TV+ show had a deeper message to deliver. “Lasso’s fundamental decency relentlessly breaks down barriers and remakes his team,” wrote the conservative legal commentator David French, in a lovely essay about the power of grace and forgiveness. French cites an especially poignant moment when Lasso offers an unconditional acceptance of someone’s apology, a full-throated absolution that’s all too rare in real life. So it’s not a huge surprise that real-life coaches are becoming Ted Lasso fans. The Wall Street Journal details the way that the upbeat, emotionally intuitive Lasso, played by Jason Sudeikis, has emerged as a model for team leaders across a range of professional sports, and what that says about modern management trends in general. “Tyranny is out. Empathy is in,” writes Ben Cohen. “Coaches are getting the most of players by relating to them, not dictating to them, while keeping them accountable without coddling them. They are behaving more like Ted Lasso.” Not a bad lesson for the world beyond sports, either. —Eric Johnson 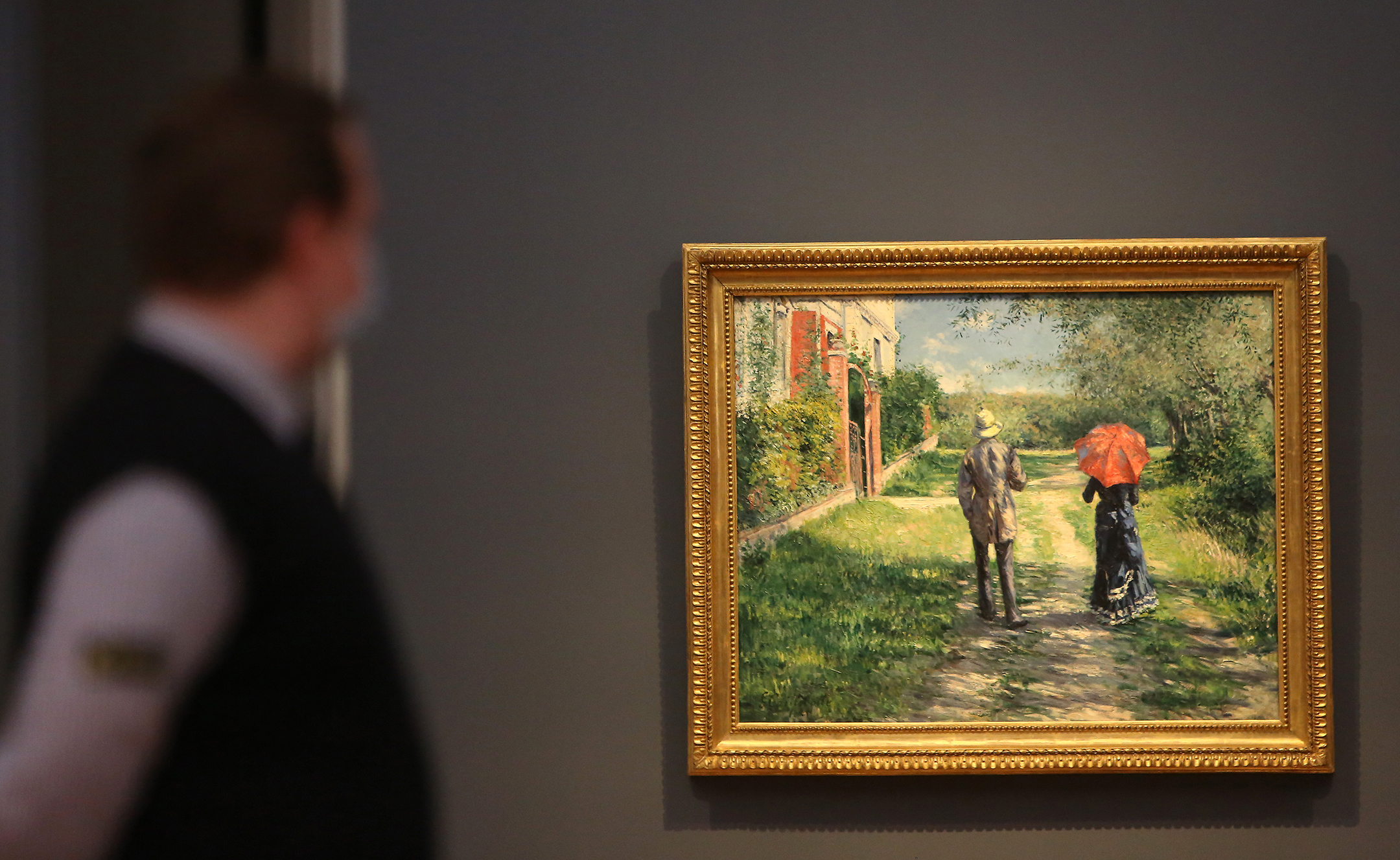 What, you think museum security guards just stand around all day oblivious to the art around them?

It's an idea so perfect that it's hard to believe no one has ever tried it before: an art exhibition curated by museum security guards. In March, the Baltimore Museum of Art will open "Guarding the Art”, a show organized by 17 of the men and women whose job it is to protect priceless pieces hanging on BMA walls from thieves, vandals, and overenthusiastic tourists. According to a piece published by ARTnews, the guards could choose anything from the BMA's nearly 95,000 objects, and they'll have a hand in the show's design, catalogue, and public programming. “In a sense it’s an experimental show, but it’s also entirely sensible given the familiarity the guards have with the objects," BMA director Christopher Bedford told ARTnews. And that's totally right. Museum guards have a unique perspective on an institution's work. They see it every day, often in more intimate and sustained ways than institutions' curatorial staffs, and they're usually the first people visitors turn to for help finding a piece or more information about a specific object. They are curators in everything but name. “I think this show will help change people’s perspective on us, and the art works at the museum,” Alex Lei, one of the BMA guards, told ARTnews. “Security guards are literally against the background at museums. We walk by them, we know they’re there, but we don’t always realize that they’re more than just wall fixtures.” I'm more familiar with the collections at the Met than the BMA, but I can't wait to see what the 17 guards put together. And I hope other institutions take notice and, ahem, borrow the idea. It'll give museumgoers a new view on the work—as well as the people entrusted with its care. —Dante A. Ciampaglia 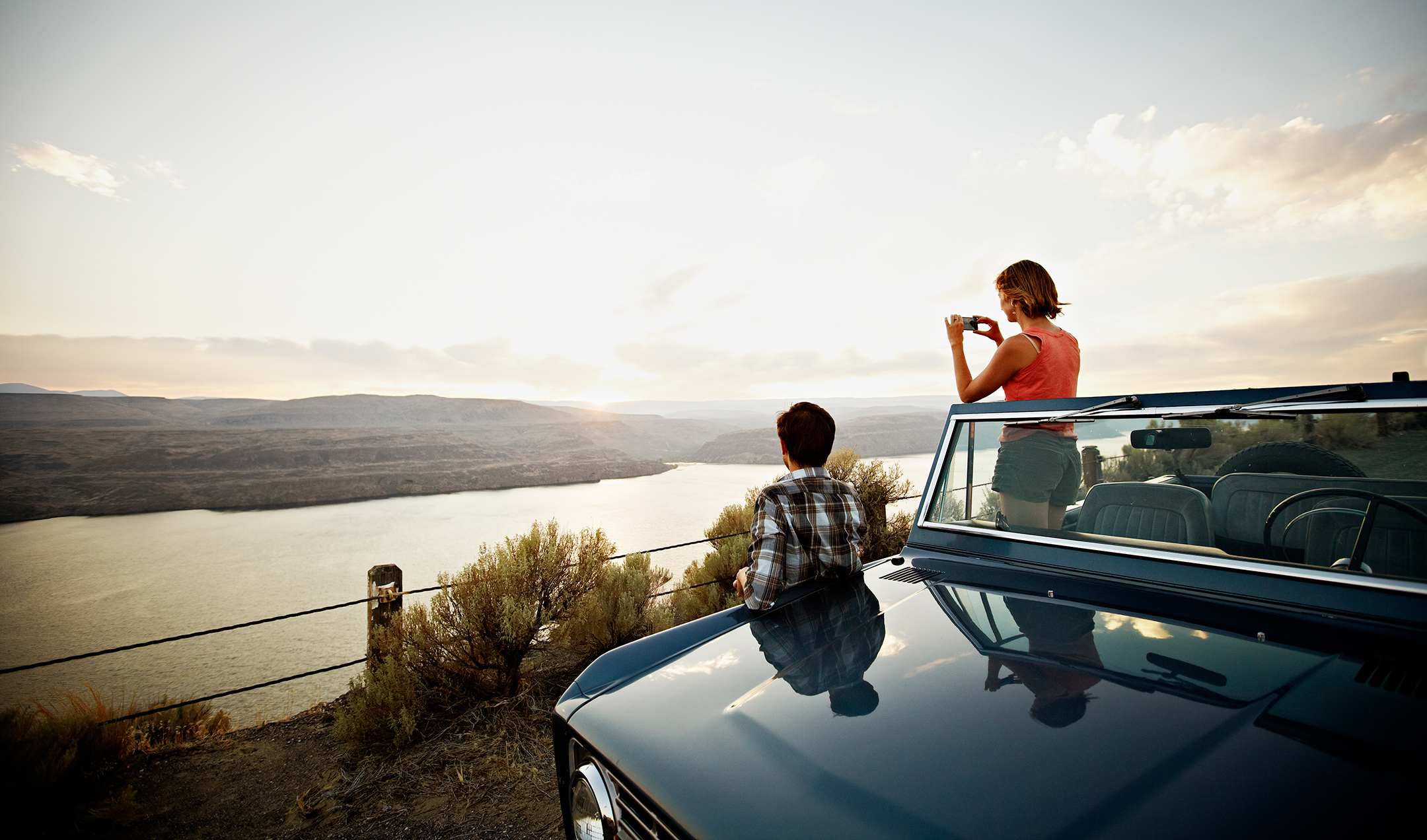 Has this couple traveled across the world to see a marvel of nature—or are they just appreciating the river a short drive from their house? Doesn't matter when you're bringing the right attitude to the adventure.

Maybe it’s because I’ve just spent a whole day getting my family from North Carolina to northern Michigan, schlepping toddlers and car seats and a baggage train of kid supplies through airports and rental car lines and many miles of rural roads, but this piece about exploring closer to home struck a lovely note. “This kind of small-brush-stroke travel is intimately valuable, too, because it teaches us where we live and who we are,” writes Alexander Lobrano on taking a short holiday near his home in France. “During the last few decades, the glamour of the exotic and far-flung has often prevailed as the grail of travel, when the truth is that it can be just as interesting to hop on a train to New Haven from New York City for a day trip as it is to go to Thailand.”

It’s all about the attitude you bring to it, Lobrano argues. The quality of your attention is what makes for good travel. “What the Covid years have taught me again is that any journey, no matter how brief or local, is a success if it provokes and feeds my curiosity, and that yes, for me it will always be wonderful to just go, anywhere.” I’ve definitely had that feeling during the past year of semi-lockdown, when I stopped traveling for work and started taking day trips to hike or just sit and read someplace different than my own little town. It reminded me of being a teenager again, remembering those first few months of having my license and feeling like there was something new and amazing to discover in every city, every crossroads, every little park or roadside restaurant within driving distance of my house. I was interested, so the things I encountered became more interesting. That’s a thrill you can get at any distance. — Eric Johnson